In a Male-Dominated VC World, The Vinetta Project’s Upcoming Event Aims To Give Female Founders Funding 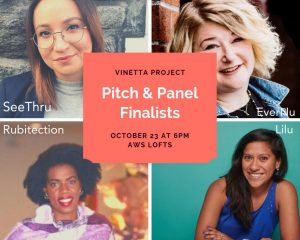 This October, more than 200 investors and entrepreneurs will gather in New York City for a pitch and panel event where four seasoned founders, whittled down from a list of 200 contenders, will compete for a $20,000 prize. Just one winner will snag the cash, but no one will walk away empty-handed, since the event is designed to provide female founders with the contacts, funding, networking opportunities, and resources that male founders have already been receiving for decades. It’s all part of the NYC Showcase Series hosted by The Vinetta Project, a company built with the mission to close the gender-based funding gap in the VC world.

Just 2.2 percent of all venture dollars went to female-founded businesses in 2018. That’s a number that 80 percent of investors seem okay with—when asked, they thought that multicultural and women business owners get the right amount, or more, of the capital they deserve.

Other numbers tell a different story. It’s one where more women in charge wouldn’t simply close a funding gap, but would help investors get more bang for their buck. Women-operated venture-backed companies have on average a 12 percent higher annual revenue than those operated by men, and organizations inclusive of women in top management achieve 34 percent better returns for investors. And the companies with a female founder at the helm? They perform 63 percent better than all-male teams.

It was those numbers that convinced LA-based founder Vanessa Dawson to start Vinetta six years ago. Part of her success has come from her belief in growing VC backing right in the founders’ own backyard. Vinetta has created hubs in seven cities across the US, each with a hyper-local focus.

“It prevents it from just being in Silicon Valley, and it allows the founders that are in different areas that may not be the classic cities that investors are going to to actually get that same support and interest from an investment perspective,” says Madelaine Czufin, director of platform and co-director of the New York Board at The Vinetta Project.

It also helps founders to actually sit down and connect with potential investors, receive hands-on feedback from advisory committees who understand the ecosystem, and have face-to-face meetings through events, including hacking courses and private dinners with small groups of like-minded founders and investors.

“It’s meant to be a way to formulate real relationships and really move the needle on getting these founders in front of strategic partners and investors,” says Czufin.

The needle has been moved. Since its inception six years ago, Vinetta has helped more than 2,300 female founders secure more than $180 million to grow their companies. This year’s NYC event at the AWS loft in SoHo will showcase four of those founders pitching to female leaders and investors from companies including First Aid Beauty and Radian Capital. They’ve been narrowed down from a list of 200 female founders, all of whom were tough competitors.

“It’s an incredible value add for founders to even apply,” Czufin explains. “They’re getting feedback that they want from a partner at a VC, so they’re getting real, tangible value adds from just being part of the Vinetta community.”

Two of the four finalists have used new tech to redesign outdated medical equipment: Adriana Catalina Vasquez Ortiz is an MIT grad who has designed the Lilu breast pump that massages the breast in order to make pumping more efficient, while Sanna Gaspard will be pitching for Rubitection, a technology that will help modernize early bedsore detection and improve patient care, particularly for currently underserved patients. Stacy Flynn will present her solution to minimizing the waste that fast fashion creates with her company, EverNu, that makes engineered fiber from discarded clothing. Finally, Lisa Guerrera will discuss how she plans to transform the beauty industry by reinventing the ingredients list with her company See Thru.

Interested in learning more? You can check out The Vinetta Project’s site here. It could be the first step on your path to gaining the networking opportunity available during the NYC showcase, learning how you can apply to be a part of Vinetta’s growing group of female founders, or putting some of your investment money toward the latest in female-founded innovation.