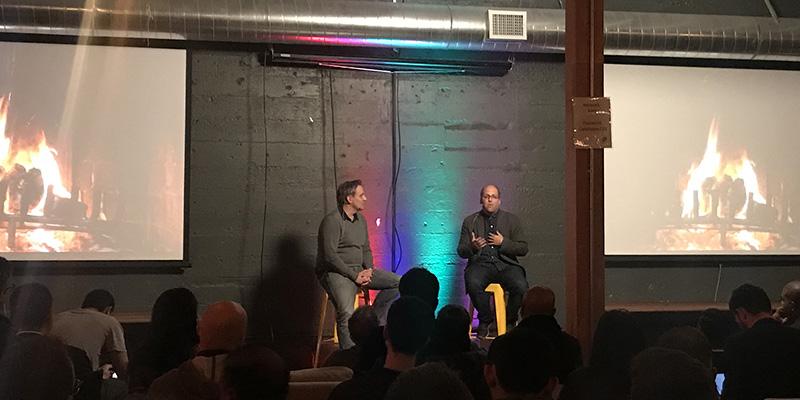 Josh Elman, a consumer specialist at venture capital firm Greylock Partners, couldn’t have been blunter about “acquihiring,” the practice of big companies paying big bucks for startups to hire teams for their expertise. “There was this funny little period time where that seemed like it was a thing,” Elman recently told a crowd of startup entrepreneurs at the AWS Loft in San Francisco. “I think that’s gone.”

“The only reason that companies are going to acquire you is because they believe that the business, or the thing that you’re building, when plugged into their company, can together make both companies even stronger,” Elman says. “So, if your goal is to be acquired, then you have to create something really valuable, and if you’re creating something really valuable, then you always have some chance of creating something that’s so valuable it can be independent.”

In a conversation with AWS head of developer relations Adam FitzGerald, Elman looked back on 2017, describing both the technology trends and business shifts he saw that inspired and surprised him as an investor. He also looked ahead to what startup founders should be looking out for in 2018. And you guessed it—Bitcoin and blockchain are going to suck up a lot of attention. And money.

Here’s what else Elman sees coming for startups, and what he’s paying special attention to as an investor. You can listen to the entire interview below.

New entertainment forms for our phones

The Greylock team, including Elman, have made some very smart bets on social media companies like Facebook, Instagram, Twitter, and Snapchat. And given that backdrop, Elman thinks the problem of building more generalized social platforms has been mostly solved, especially in terms of experiences on our phones. However, when he and his partners started looking at what people are still trying to do on their phones, “we realized that we’re seeing all this content all the time but we’re not really entertained,” Elman says. Entertainment happens on our phones via services like Netflix. “Netflix introducing great new content, but it’s really long form and you really have to have hours to watch it,” Elman says.

So Elman began looking for new kinds of entertainment forms that are tailored for how we use our phones. “What are the next wave of new mobile content experiences that give us the same kind of endorphins and experience like Netflix might for long-form shows, but can be something we can watch on our phones, read on our phones, and experience quickly?” Elman says. “What does next-generation entertainment that’s built on mobile, and experienced on mobile, look like? What will you do when in a short duration, bursty way when you’re tired of just looking at all the cool things my friends are doing in their lives, or more video? And how can you kinda control and pace it more intimately?”

Union Square Ventures’ Fred Wilson calls it The Early Stage Slump—simply put, the shrinking number of early-stage investments in 2017 when compared to the early-stage investment boom between 2012 and 2016. The question for Elman, was, does he see the same trend, and is seed stage funding drying up?

The short answer, Elman says, is “Yes,” purely based on the number of deals. The question of why it’s happening can be connected back to distribution in 2017.

“It’s gotten a lot harder,” Elman says. “We forget, but from around from 2003 to 2009 there were more and more computers and people coming online every day.  It was happening so quickly that even if you were just starting a new thing, the chance you could be the first thing that those people use was very, very possible. And then from 2008 to 2013 people began getting their very first phones. So again, there was this explosion of people and mobile apps. Those two big waves allowed lots of investors to come in and think, ‘Oh my gosh, it’s so easy to make money’ … And so, between 2014 and 2016 we saw tons of people just throwing money at everything.”

Founders popped up everywhere, because why get a job when you can get $1 million to start a company? The early-stage funding flowed, boosted by newcomer investors looking for returns in a very low-interest world. Until this year.

“We saw this pattern emerging where there are so many people working on so many spread-out ideas, and it became hard to rise above the noise because people already had their phones and their patterns, and distribution’s gotten slower,” Elman says.

“What we’re seeing right now is a reset back to what it might have been back in the late web era before the mobile era was really exploding, which is [the idea that] it’s harder to have a great idea that rises above the noise and to get funding. If you do [have a great idea], there’s still a chance to make something great. But it’s going to be harder to say, “Hey, we’re three people who can engineer something, let’s go raise a million bucks.” That part (of the market) is sort of gone.”

Mobile is not dead

As Elman explains, there are still new forms of entertainment to be developed (preferably not VR, in his opinion) and other problems yet to be solved. “But it isn’t, how do I connect more with my friends? Or, how do I share more photos with my friends?” Elman says. “Those problems are reasonably well solved. [Now] it’s more how do I find my friends when I’m out for an evening? How do I figure out where to go? What’s going on around me right now? Who is around me? Where should I be tomorrow morning? There are so many things that our phones don’t do well yet.”

And, of course, Bitcoin

Elman is as mesmerized by Bitcoin’s massive rally in 2017 as anyone, but looking farther out he is focused on how Bitcoin and other cryptocurrencies are exchanged for goods and services and how that changes commerce.

“At the beginning of 2017 people predicted Bitcoin was interesting and had a chance to get more interesting,” Elman says. “I don’t think anybody predicted that there would be this kind of run-up, and everybody looking for that as an investment vehicle.

“It’s clear that decentralizing tokens, and the ways we can exchange them, will give rise to lots of new use cases,” Elman says. “We don’t know what those are yet, and we don’t know what the right decentralized apps are, but I am super excited to figure out what happens when a little bit of money exchange can be transformative. That’s going to be really fun to go figure out.”