Like many things in life, the more choices you have the harder it is to make a decision. While running workloads in the cloud does make some decisions easier, it doesn’t eliminate them altogether, and there are still choices you must make on how to best architect for the cloud. These decisions now center more on which AWS service, resource, or configuration is best for you. Now that Amazon FSx for Lustre has persistent file systems, many of you may wonder which per unit throughput setting is best suited for your workload. In this blog post, I share how FSx for Lustre persistent-50 file systems perform. I use IOR, a commonly used file system benchmarking application typically used to evaluate the performance of parallel file systems, to test different file system components using read and write operations. In doing so, I hope to make you aware how persistent-50 file systems can achieve extremely high throughput, well above the advertised per-unit throughput value of these file systems.

If you’re not familiar with persistent FSx for Lustre file systems, I encourage you to read this recent blog post written by one of my colleagues at AWS.

How high performance is achieved

File-based workloads are typically spiky, driving high levels of throughput for short periods, but driving lower levels of throughput for longer periods. These types of workloads fit great within the burst model of FSx for Lustre. If your workload is more consistent, select a persistent per unit throughput that aligns with your needs, but remember you still have burst throughput available if you need it. These days, you never know what can happen that can drive throughput levels above the norm.

Let me show you how a persistent-50 file system bursts above its baseline.

First, I create a 2.4 TiB persistent-50 file system. Based on the values in Table 1, the throughput and in-memory cache available to these persistent file systems is in the following table (Table 2).

Below is an example of my user data script. It installs the latest AWS CLI, the Lustre client, IOR, a few packages, and mounts the 2.4 TiB persistent-50 file system as /fsx. This script does not change the stripe count or size of the file system so all my tests use the default Lustre stripe configuration – a stripe count of 1 and a stripe size of 1,048,576 bytes.

Third, from all four instances I run an IOR script that writes 512 GiB of data continuously to the persistent-50 file system in parallel. The following is an example of the IOR write script. I bypass the cache on the client EC2 instances and use eight threads per instances. 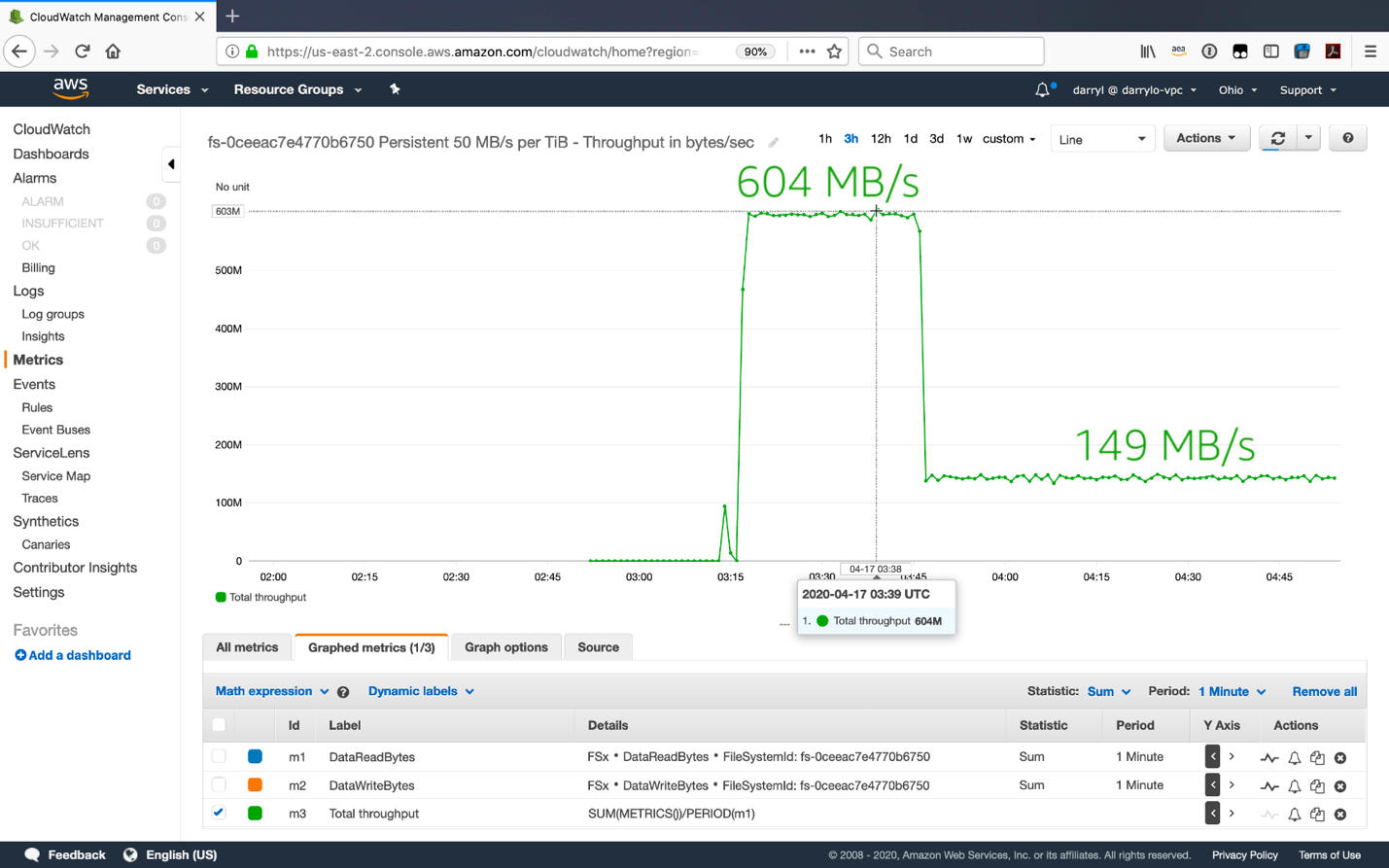 Fourth, instead of waiting for the burst credits to be replenished, I create a new 2.4 TiB persistent-50 file system that is identical to the one I just tested and mount it on all four EC2 instances. This only takes about five minutes so I’m up and running for my next test in no time. From one instance I run an IOR script that creates eight 8-GiB files totaling 64 GiB of data. Then, from all four instances I run an IOR script that reads from these files continuously using eight threads per instance. The following is an example of the IOR script.

The following graph shows the total throughput of this read test. Again, for a short period of time the IOR read test is using the burst and variable throughput of the file system and the throughput is a consistent 638 MB/s. For the remainder of the test I get 153 MB/s from a persistent-50 file system that has a baseline throughput of 117 MB/s. Refer back to Table 2 above to see how these results compare to the theoretical numbers. 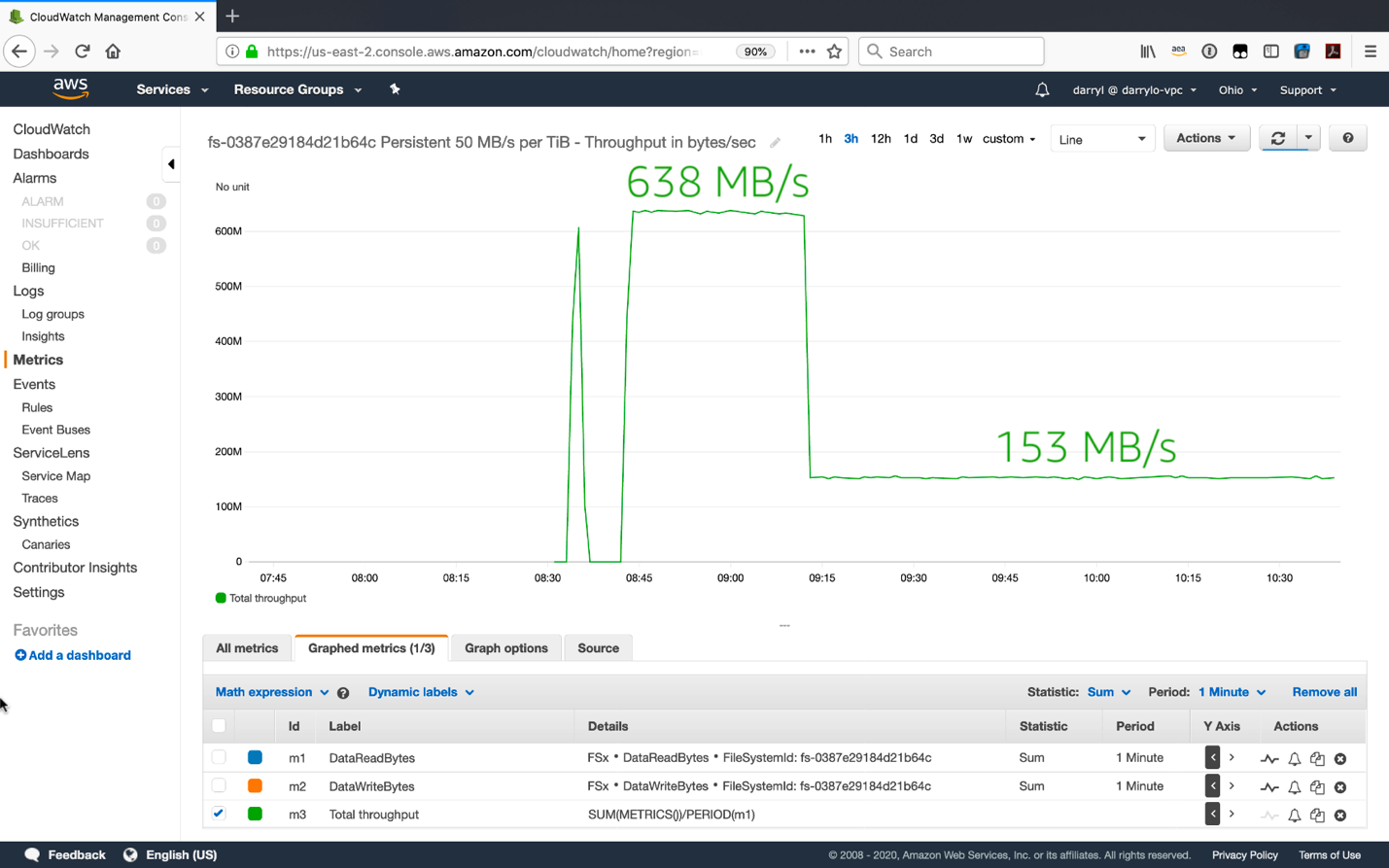 Fifth, once again I create a new 2.4-TiB file system so I start out with full burst capabilities. I want to test just the network performance of the file system so I use IOR to create a dataset that can fully reside in the in-memory cache. From one EC2 instance I create eight 675-MiB files totaling 5.28 GiB of data. Then, from all four instances I run an IOR script that reads from these files continuously using eight threads per instance. All my IOR scripts, including this one, use the –posix.odirect flag to bypass the local cache of the EC2 instance. This makes it so that all my I/O requests come over the network from the file system. The following is an example of the IOR script.

The results are amazing. 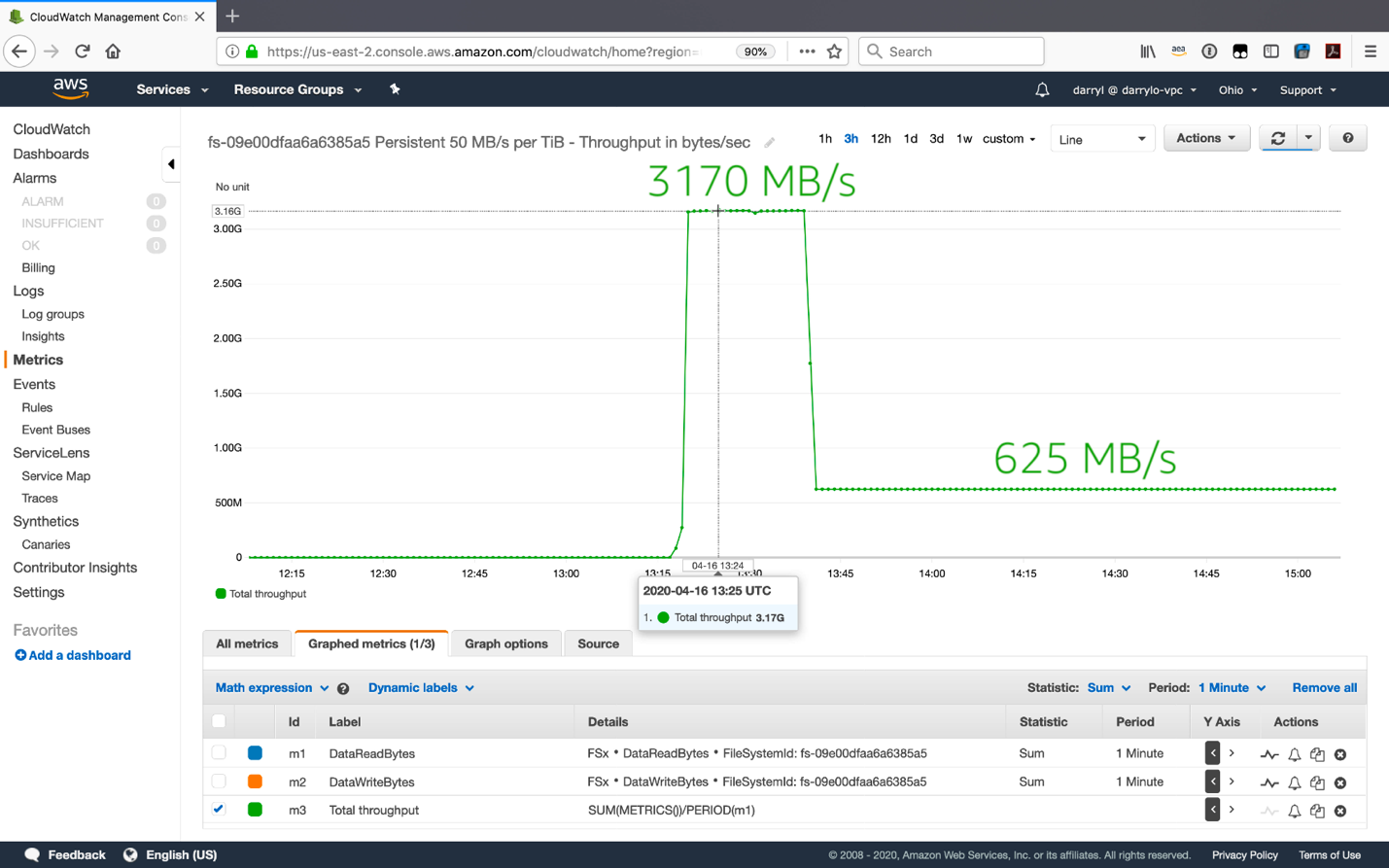 It is likely that your workloads are probably much larger than the memory designated for caching. However, portions of your workload should be able to take advantage of this in-memory cache and the high variable network throughput of these file systems.

What are the results

Next time you’re creating an FSx for Lustre file system and you’re moving your pointer back and forth over the throughput per unit of storage radio buttons, do the math and test using a persistent-50 file system. You’ll be surprised.

Thanks for reading this blog post, please leave any questions or comments in the comments section!