Database administrators and developers traditionally schedule scripts to run against databases using the system cron on the host where the database is running. As a managed database service, Amazon Relational Database Service (RDS) does not provide access to the underlying infrastructure, so if you migrate such workloads from on premises, you must move these jobs. This post provides an alternate way to schedule and run jobs centrally.

AWS Batch is a managed service that abstracts the complexities of provisioning, managing, monitoring, and scaling your computing jobs, and enables you to easily and efficiently run jobs on AWS. Additionally, AWS Batch enables you to build jobs using the language of your choice and deploy it as a Docker container.

This post demonstrates how to use the combination of AWS Batch and Amazon CloudWatch rules to dynamically provision resources and schedule and run functions or stored procedures on PostgreSQL database. The same process can be used to run job on any Amazon RDS database.

The following diagram illustrates the architecture of the solution. 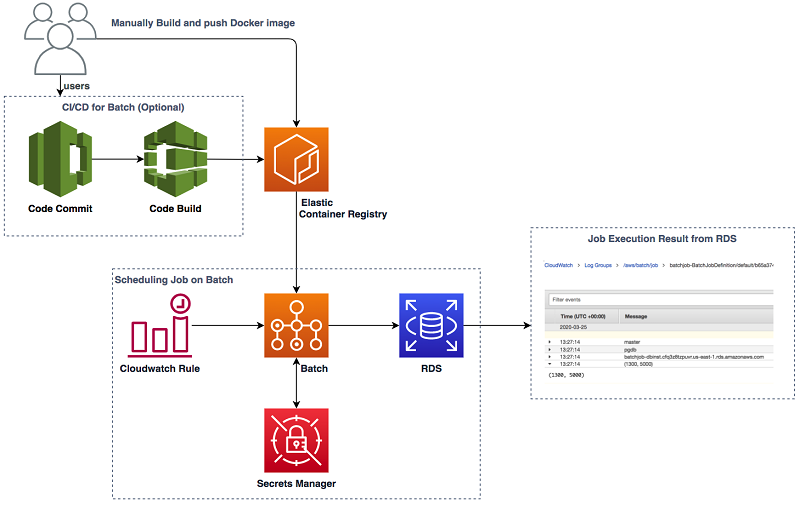 Before you get started, complete the following prerequisites:

The following steps provide a high-level overview of the walkthrough:

This post also includes optional instructions to manage changes to the job and schedule with AWS CodeCommit and AWS CodeBuild.

Download the files required to set up the environment. See the following code:

To run the CloudFormation scripts, complete the following steps:

Run the CloudFormation template to provision the required services. See the following code:

The template creates the following:

The following are ancillary services, which are required only if you choose to manage changes to the job and schedule rule using CodeCommit and CodeBuild:

Services are created with the CloudFormation stack name as a prefix. The following screenshot shows the details of a successful CloudFormation deployment. 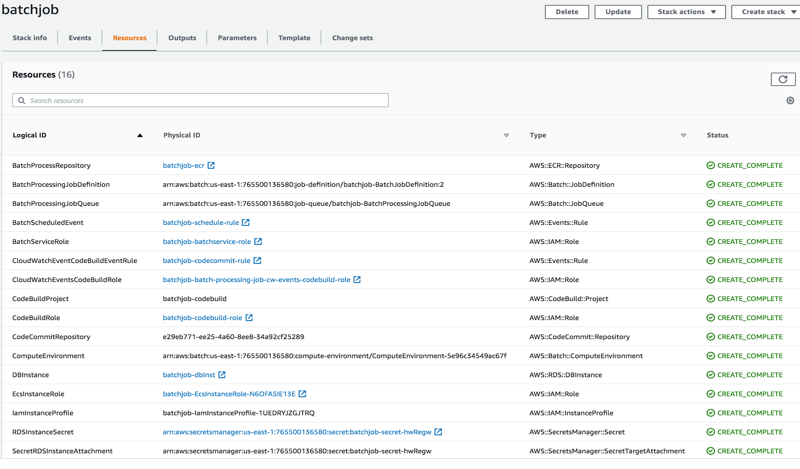 To run the database scripts, complete the following steps:

Building, tagging, and pushing the Docker image to Amazon ECR

To build, tag, and push your Docker image to Amazon ECR, complete the following steps:

The CloudFormation template also creates a CloudWatch rule to run the job on a schedule. You can change the schedule by editing the rule.

On the AWS Management Console, navigate to your CloudFormation stack batchjob and delete it.

You can use the following steps to manage changes to Docker image instead of building, tagging, and pushing it manually to ECR.

To commit code to the CodeCommit repository, complete the following steps:

This post demonstrated how to integrate different AWS services to schedule and run jobs on a PostgresSQL database. You can run jobs or orchestrate complex job workflows on any RDS database with the same solution by including the compatible python adapter in the docker container and importing it in your python script.

Additionally, this solution helps you manage changes to the job and schedules using the CI/CD toolchain provisioned along with AWS Batch and CloudWatch rules.

Udayasimha Theepireddy (Uday) is a Senior Cloud Architect at Amazon Web Services. He works with AWS customers to provide guidance and technical assistance on their large scale migrations, helping them improving the value of their solutions when using AWS.

Vinod Ramasubbu is a Cloud Application Architect with Amazon Web Services. He works with customers to architect, design, and automate business softwares at scale on AWS cloud