In late 2018, we first shared an introduction to using AWS Cloud Development Kit with Amazon ECS. In the almost two years since that article, countless developers have discovered that they enjoy deploying containers to Amazon Elastic Container Service (ECS) and AWS Fargate by writing infrastructure as code using a declarative SDK in their preferred programming language. At the time of writing this article, the @aws-cdk/aws-ecs module for programmatically defining containerized deployments for ECS is downloaded on NPM more than 110k times each week.

As a quick recap, AWS Cloud Development Kit is an SDK that provides infrastructure constructs. These constructs are simple classes you can instantiate by using the SDK in your preferred programming language. If you use CDK, you will likely be able to write your infrastructure as code using the exact same programming language you use to write your application. AWS CDK turns constructs into cloud resources using a two step process. First synthesis, which turns the SDK calls into a lower level metadata description, kind of like how a compiler turns your code into lower level machine language. Then deployment, which passes the metadata description to an infrastructure as code service like CloudFormation, Terraform, or Kubernetes, that can turn that infrastructure description into real resources in the cloud.

Levels of abstraction in AWS CDK

Constructs are at the core of AWS CDK, and they come at different levels of abstraction, from level one constructs up to level three constructs. 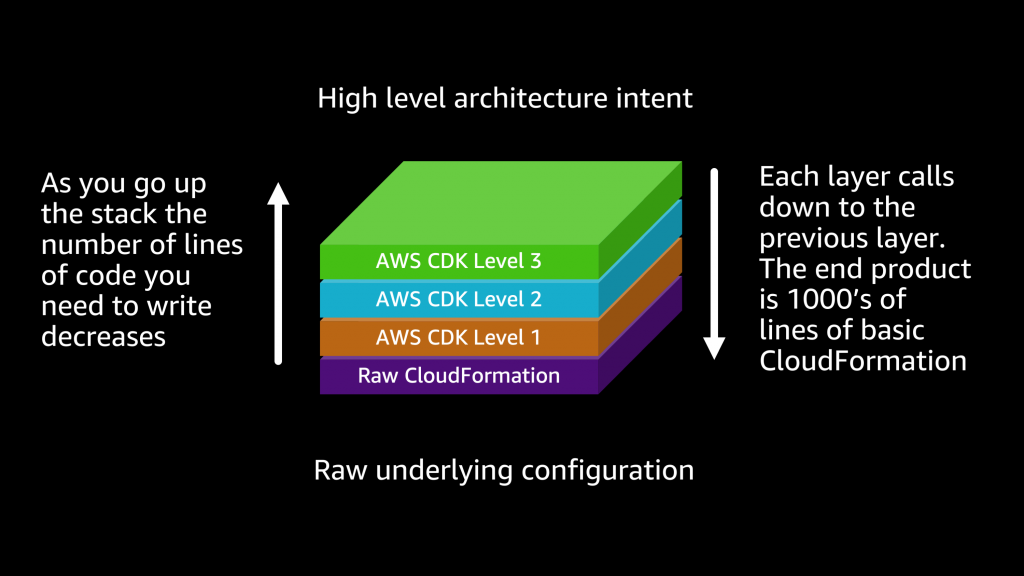 The basic “level one” constructs are a direct one to one mapping between that construct class and a single cloud resource. For example, the CDK construct CfnService in @aws-cdk/aws-ecs maps one to one to a AWS::ECS::Service resource in CloudFormation. But if you have ever handwritten CloudFormation for an ECS service, you know that this single resource alone is not enough to have a fully functioning service. You also need IAM roles for the service, a security group, and it is likely that you also want additional features such as a CloudWatch log group to store your service’s logs.

For this reason, CDK also comes with “level two” constructs. These constructs package up multiple level one cloud resources that are necessary to create a functioning infrastructure component in the cloud. For example @aws-cdk/aws-ecs provides the FargateService construct. This construct provisions its own IAM role, security group, and has helper methods for interacting with the service. The following code example shows a few of these handy helper methods in action:

CDK abstractions don’t stop there though. The next level of construct is “level three”. The goal of a construct at this level of abstraction is to package up multiple level two constructs and create everything that is necessary to deploy an entire architectural stack. For this reason, we released the @aws-cdk/aws-ecs-patterns module. This module provides handy constructs such as ApplicationLoadBalancedFargateService, which allows you to provision an entire load balanced container deployment with just a few lines of code:

Depending on what level of expertise you have and what level of access to configuration you need, you can choose to implement your infrastructure as code at any level of construct. In general, the higher level constructs give you a faster path to success, with prebuilt patterns that have been designed to serve the most common deployment use cases. The lower level constructs give you more direct access to all the options and possible combinations of configuration, but they also require you to have a deeper understanding of the underlying pieces.

This tradeoff often meant that developers could start out quickly and easily with a level three construct like ApplicationLoadBalancedFargateService, but later they would discover some new features or services they wanted to utilize, such as AWS App Mesh. Because setting up App Mesh required extra configuration on the service, it would require developers to fallback to the level two constructs, and reimplement their infrastructure as code from scratch using the underlying FargateService. This time, they would need to configure their own load balancer instead of being able to benefit from the level three construct that they started out with.

To solve this problem of needing to fallback to a lower level of abstraction, we have built a new CDK module called @aws-cdk-containers/ecs-service-extensions.

This new module provides a level three construct that is designed to grow with you as your needs grow. You can start out using it as a simple quick start for your first basic application. When there are more complicated ECS features you want to configure, such as a service mesh, you can easily add prebuilt extensions that configure these features for you. And if you find something more advanced that can’t be configured with the constructs out of the box, you can even write your own extension to do it for you, without rewriting your entire infrastructure as code.

These lines of code implement a simple load balanced container deployment. The first construct used is the Environment construct. This construct automatically creates an isolated VPC, an ECS cluster, and any other global resources needed. Then we create a ServiceDescription. This class just gathers up all the specifications of the service you want to create. In this case, we are specifying a container to run, and adding the HttpLoadBalancerExtension. Last but not least, the Service class is instantiated. This turns the service description into a live service inside the environment.

Let’s imagine now that the application needs to be a two tier application with a service mesh to connect the web frontend to a backend API. Service meshes are very powerful for environments with multiple services, but they are often notoriously hard to configure. 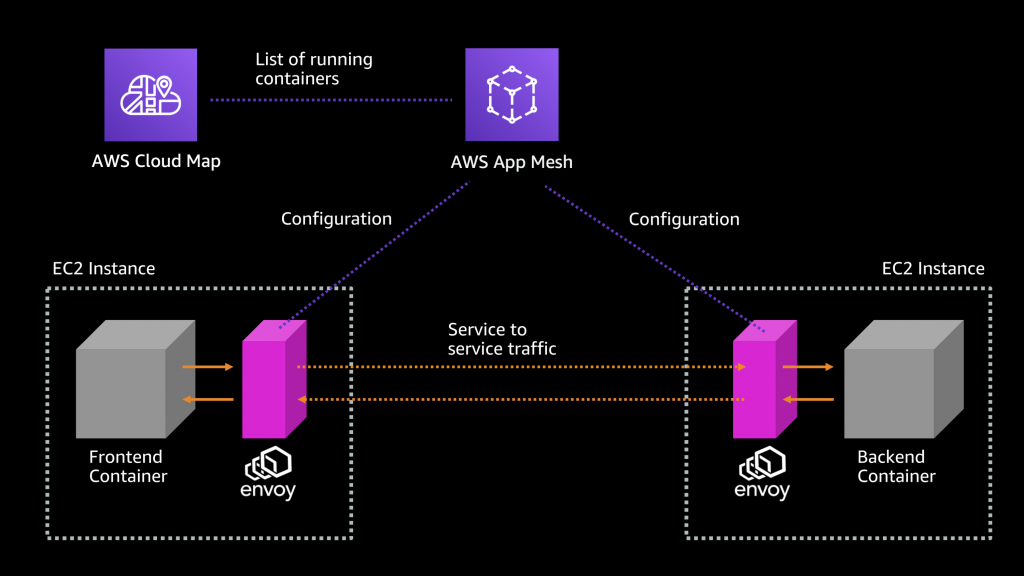 However, you are still responsible for configuring a few pieces:

Let’s look at a code example of how simple this process of building a service mesh is when using ECS service extensions:

Adding App Mesh to this architecture was as easy as importing the AppMeshExtension and adding it to the existing service description. There was no need to change out the constructs or reimplement things by falling back to the lower “level two“ constructs. The service mesh can be progressively added to the existing infrastructure as code. Last but not least, there is a helper method called connectTo, which automatically configured the service mesh and security group rules to connect the frontend tier to the backend tier.

This is only the beginning. Today @aws-cdk-containers/ecs-service-extensions ships with the following built-in extensions:

Create your own extension

One of the most interesting things about ECS service extensions is that you aren’t limited to the built-in extensions. You can build your own extension as well. The module has a simple extension interface that you can implement to make your own extension that functions right alongside the existing extensions. This works by giving you a few simple hooks to implement, which allow you to make changes to the ECS task definition, service properties, or make use of the created service.

Here is an example of creating an extension with a custom scaling pattern:

Now that this extension is written, you can easily reuse it across your own services, or even share it across your entire organization so that everyone is using the same scaling logic. Developers can drop in the MyTarget50PercentCpuScaling extension rather than needing to manually configure their service’s scaling behavior. As you can imagine, the possibilities are endless. Just a few ideas to start with:

All of these things and more can be accomplished by writing a custom extension, and that logic can then be easily reused across all your services. Most importantly any future updates to the logic can be centrally managed by changing the extension in one place, and all services that have adopted the extension can receive those changes.

It’s still day one for @aws-cdk-containers/ecs-service-extensions and we want to hear your feedback on what works well, what doesn’t, and what things you’d like to see added. If this concept of service extensions for ECS is interesting to you, please check out the package on Github or the CDK TypeScript documentation. Feel free to open an issue or even a PR on the repository if you have ideas about more extensions that you’d like to see added to the default list of built-in extensions.