This new capability helps AWS customers comply with their internal or external security and compliance requirements, makes it simpler to migrate IoT devices to AWS IoT, helps them implement a failover strategy for the purpose of disaster recovery, and makes it easy to architect usage scenarios with multiple AWS Regions.

In this blog post, we demonstrate how you can use Configurable Endpoints to simplify and expedite migration of IoT devices to AWS IoT from an existing IoT solution.

Migrating your connected devices fleet to AWS IoT Core is a critical task of your IoT migration journey. Your devices are a central resource in your IoT value chain, as much as your users and your data, and their migration should be just as reliable and fast. Migrating devices to AWS IoT frequently involves updating the firmware and software configurations, such as which IoT endpoint and authentication method to use for connections. However, performing a mass update of a large device fleet (thousands or even millions of devices), distributed across different geographical regions, might pose some of the following challenges:

1. Your IoT devices may not be allowed to connect to *amazonaws.com

Your organization’s strategic decisions for security and compliance may require you to use your own company owned domains and/or server certificates and manage your own Private Key Infrastructure (PKI) and Certification Authority. This means that your IoT application could be exposing an endpoint on your company’ own private or public domain, such as iot.yourcompany.example.com where your devices are expected to connect. This scenario prevents you from using the standard *.amazonaws.com domains without performing a software upgrade on your devices.

2. You may want to avoid extensive over-the-air upgrades (OTA)

There are situations where you can’t easily perform an extensive over the air upgrade (OTA) to reconfigure your device settings. This can be due to the long timeline for firmware development and validation, or due to the fact that a remote device upgrade may not be reliable due to limited connectivity in certain geographic areas of your fleet.

Using a custom domain name in the device firmware helps simplify migration operations because instead of performing an OTA upgrade, you can simply update a Canonical Name (CNAME) record in the Domain Name System (DNS; single point modify). This helps you benefit from other advantages of DNS such as weighted routing to perform incremental migrations.

3. You may have different device families to manage

Your fleet might have different device architectures, each one requiring a different trusted endpoint and/or authorisation mechanism. Multiple configurable endpoints are required for each family to enable legacy device support.

The following diagram shows how you can use custom domains in AWS IoT Core for an IoT device migration. 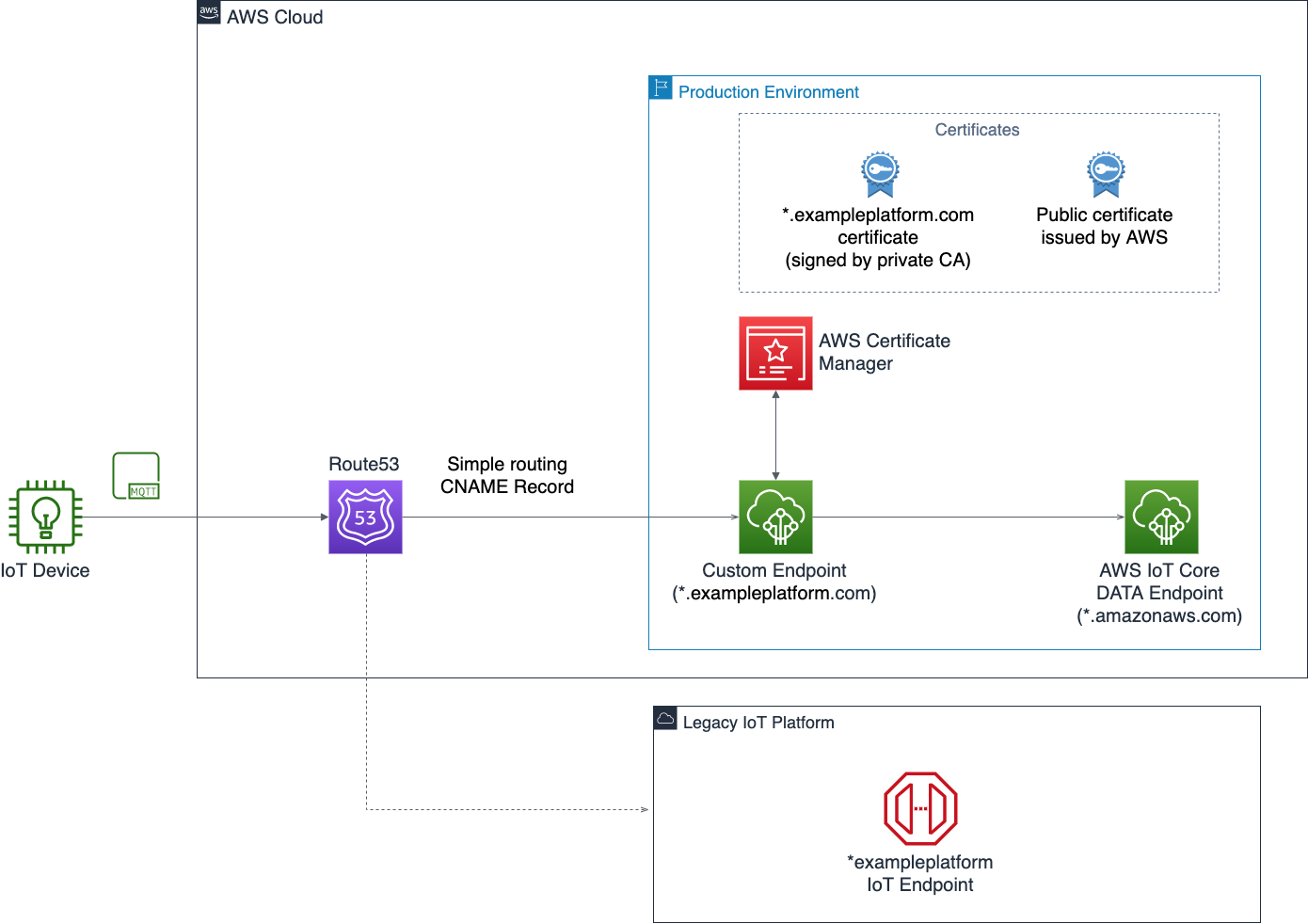 This solution leverages the following services:

For the walkthrough, you should have following prerequisites:

In this example, we simulate a source IoT endpoint for the migration, using AWS IoT Core and Configurable Endpoints, in a different Region of the same AWS account. This post will explain the following steps for implementing this solution:

In this example, we create a hosted zone in Route 53 to manage our registered domain name example.com.

Step 2a: Configure the Target IoT endpoint for the migration – Register a certificate chain in ACM

The following walkthrough provides example for both scenarios:

You see the server certificates appear with validation status “success” in ACM on your AWS Management Console. 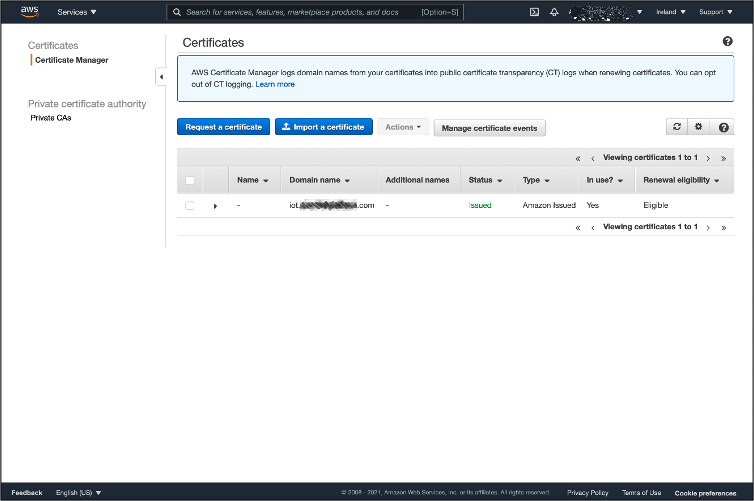 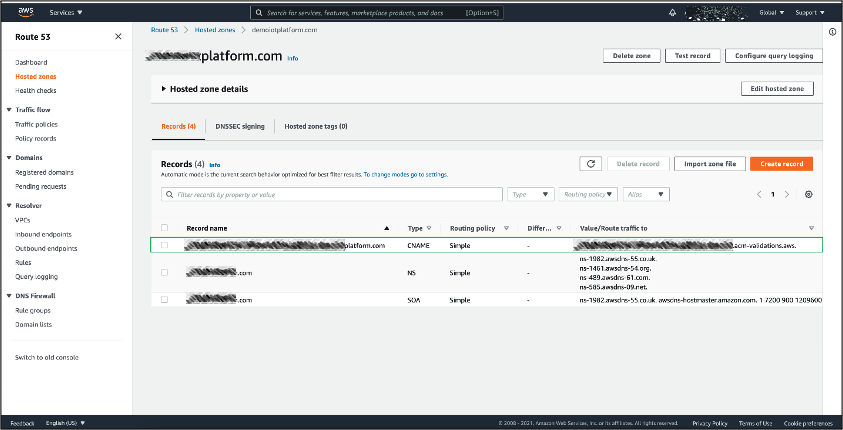 Record for DNS validation in your Route 53 hosted zone

To perform this operation, you need the following resources:

To configure the server certificate chain:

Step 2b: Configure the target IoT endpoint for the migration – Configure a custom domain in AWS IoT Core using your registered server certificate

To perform this operation, you require the registered server certificates ARN and your domain name:

Now you have a custom domain configuration in AWS IoT Core in your target Region, you can see the configuration appear in your AWS Management Console under AWS IoT > Settings: 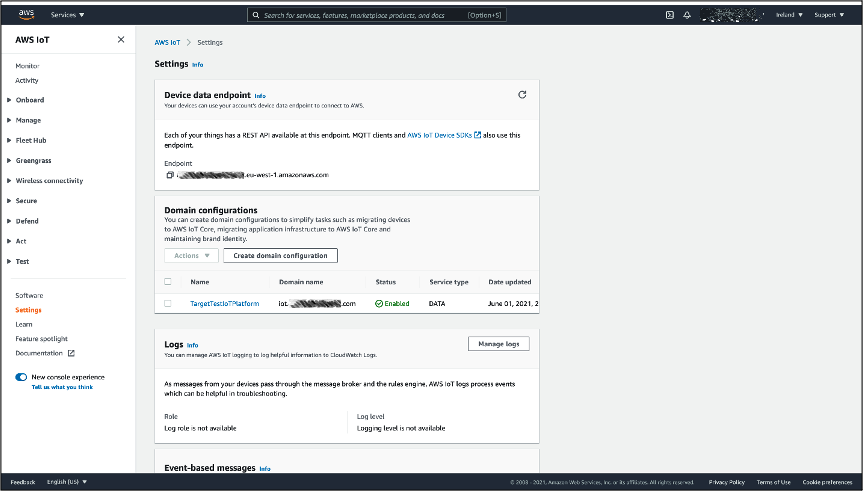 The devices in your fleet require a valid identity and an IoT policy in your target IoT endpoint to connect. As the best practice, your provisioning flow should allow you to avoid sharing private key over the public internet, and it is advised that you embed a provisioning flow as part of your IoT device design.

AWS provides a list of options for device provisioning as part of AWS IoT Core documentation and a whitepaper on “Device Manufacturing and Provisioning with X.509 Certificates in AWS IoT Core” that explains in depth each option in respect to real customer scenarios.

Please note that the device certificates you can import should conform to the standards supported by AWS IoT Core. Please see AWS IoT Core Documentation on X.509 certificates for additional details.

In our example, we create a test thing, device certificate, and an IoT policy using the CLI. First, to create an identity for each of your test IoT devices:

You see the registered thing, policy, and device certificate in your AWS Account through the AWS IoT Console.

The last step of the configuration process is to create CNAME records in your DNS to implement the routing from your domain name to the AWS IoT Core endpoint.

If you use Route 53, you can use the available routing mechanisms to implement more complex scenarios, such as using Weighted Routing to perform blue/green deployments or to gradually shift traffic from one endpoint to another.

Once this is complete, the new record is displayed in the hosted zone in Route 53. 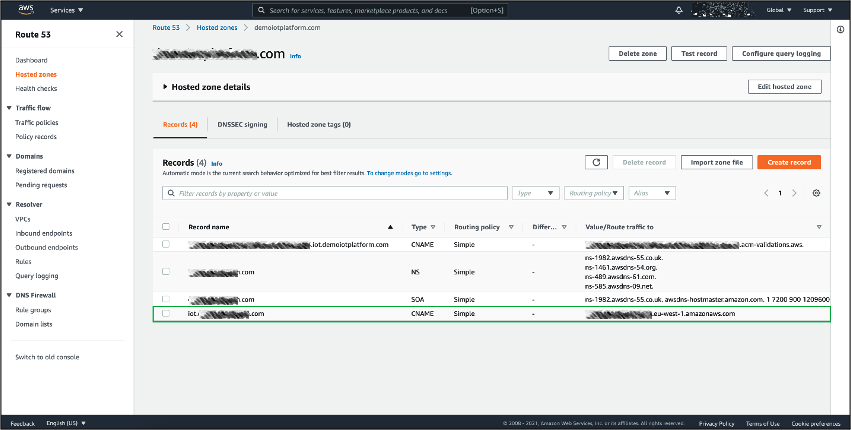 Next, we send test MQTT messages to the target platform endpoint we registered as iot.example.com using the Eclipse Mosquitto MQTT client downloaded during the prerequisites. This helps ensure the configured routing policy and migration worked as expected.

Requirements to test the solution:

Procedure to test your solution:

To help prevent unwanted charges to your AWS account, delete the AWS resources that you used for this walkthrough. These AWS resources include the AWS IoT Core, AWS Certificate Manager, Route 53. You can use the AWS CLI, AWS Management Console, or the AWS APIs to perform the cleanup. In this section, we refer the AWS CLI approach. If you want to keep these resources, you can ignore this section.

In this post, we discussed some of the key challenges customers face when migrating their IoT device fleet to AWS, and how AWS IoT Core Configurable Endpoints can help simplify the process. The architecture and example proposed in this blog provides a solution that you can adopt to enable a seamless migration of an IoT device fleet to AWS, and lays the foundation for a simpler management of future migration needs you might have for your IoT application.

You can use the provided example implementation for testing yourself the capability, and setting up the required resources in AWS IoT Core, Route 53 and AWS Certificate Manager. For more flexibility you can also bring your own Device Certificates and CA Certificates in AWS IoT Core. To learn more about how to use AWS IoT Core Configurable Endpoints, you can refer to the documentation.

AWS has helped customers like LG, Traeger Grills, Belkin, Centrica Hive, Weissbeerger, and many others quickly and easily migrate from their homegrown or third-party IoT platforms. These customers migrated to take advantage of the security, scalability, reliability, and breadth and depth of AWS IoT services.

Learn more about how AWS can help make your migration quick and easy on our AWS IoT Migrations Solution Page, or contact us, and someone will be in touch to schedule time to walk through your use case.