In the first part of this series, we discussed several use cases for including a second Region in your disaster recovery (DR) plans for your Amazon Relational Database Service (Amazon RDS) for Oracle  database instances. We also introduced cross-Region automated backups to assist you in establishing and maintaining cross-Region point in time restore (PITR) capability for your Amazon RDS for Oracle instances. In this post, we show you how to set up cross-Region automated backups on new and existing RDS for Oracle instances, including AWS KMS-encrypted instances, and we show how to monitor the replication as well as how to perform a point-in-time restore in the destination Region.

To add cross-Region automated backups to an existing instance via the Amazon RDS console, complete the following steps: 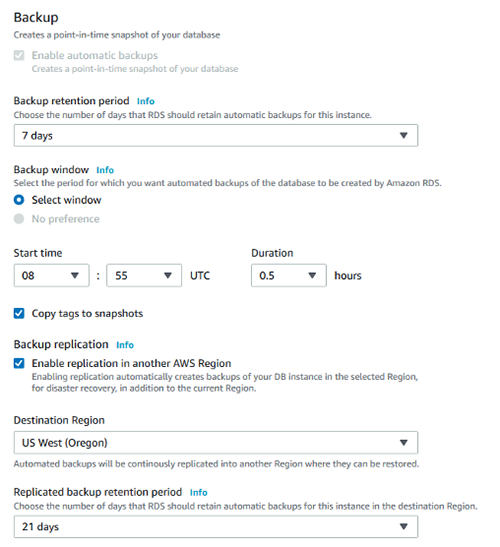 Only certain Regions are paired at this time, such as US East (N. Virginia) with US West (Oregon); EU (Ireland) with EU (Frankfurt); and Asia Pacific (Tokyo) with Asia Pacific (Osaka). More Region pairings are coming soon. To see which Regions support replication with your current Region, run the following command. 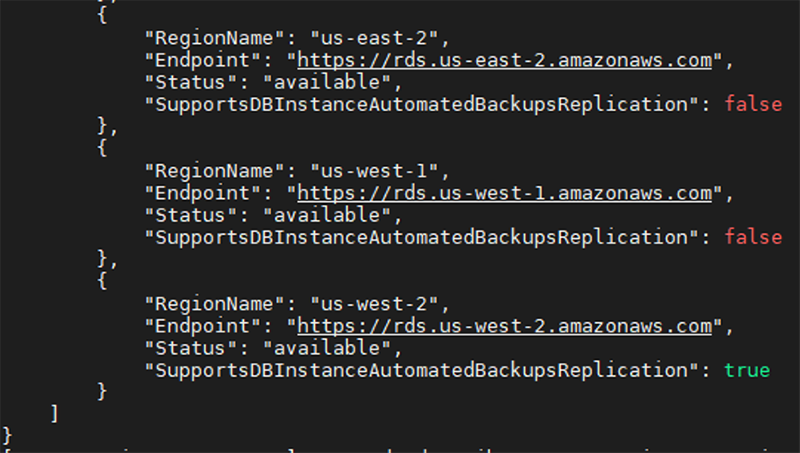 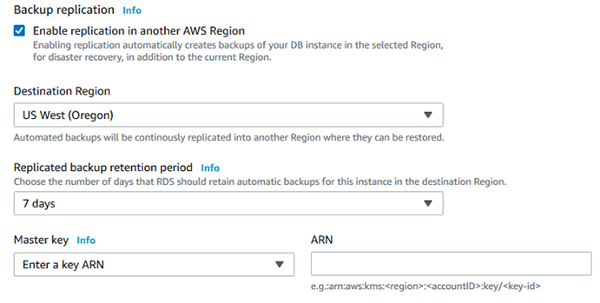 To verify automated backups of your instances in the local Region, choose Automated backups in the navigation pane of the Amazon RDS console and look under the Current Region tab. You can view and manage cross-Region backups from this page. Choose the Replicated tab to view backups from a remote Region that have been replicated to the Region currently in view. In the destination Region, you can view the restorable time window for each replicated backup and initiate the restore of a backup to a point in time within that window for a given instance.

To view your in-Region restorable time window and replicated backups ARN from the AWS CLI, enter the following code.

The following screenshot shows our result. 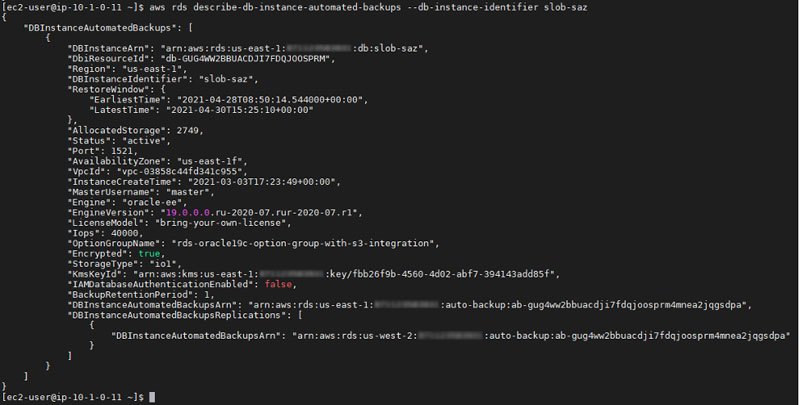 In the destination Region, you can confirm the restore window specifying the automated backup’s ARN obtained from the previous command’s output.

The following screenshot shows our result.

In the unlikely event of a disaster that renders the source Region for your RDS Oracle instance unavailable, restoring your cross-Region snapshots follows the same process as restoring in the source Region. Amazon RDS always restores from backup to a new instance. You can initiate a restore via the Amazon RDS console, the AWS CLI, or by making an API call within your automation framework.

To use the Amazon RDS console, complete the following steps:

Accomplish the same from the AWS CLI with the following code.

Amazon RDS begins working on the restore immediately, and the Amazon RDS console shows the status of the new instance as Creating.

The time taken to complete the restore operation largely depends on the number of archived logs that must be applied on top of the automated snapshot to arrive at your chosen restore point. Amazon RDS backs up the instance after it completes the restore.

Select the instance endpoint on the Connectivity & security tab and update your applications to point to the new instance. Your restore is complete, and the instance is available for transactions. You may now choose to replicate the automated backups of the restored instance to another Region. 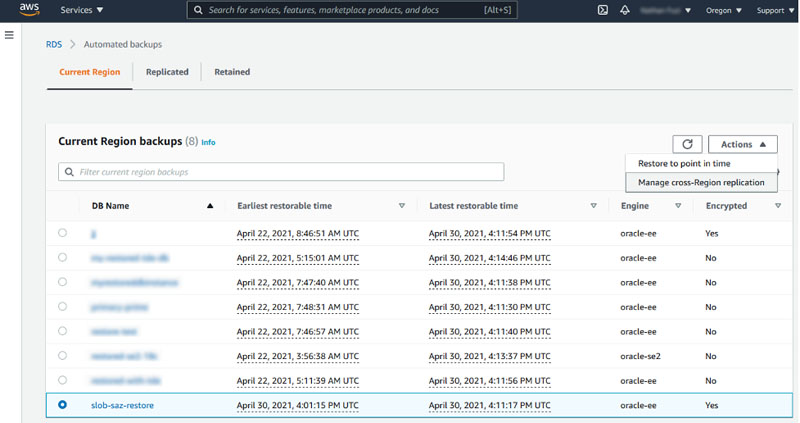 Nagesh Battula is a Principal Product Manager on the Amazon Web Services RDS team. He is responsible for the product management of Amazon RDS for Oracle. Prior to joining AWS, Nagesh was a member of the Oracle High Availability Product Management team with special focus on distributed database architecture addressing scalability and high availability. While at Oracle, he was the product manager for Oracle Sharding and Oracle Global Data Services. Nagesh has 20+ years of combined experience in the database realm. He has a BS in Engineering and MS in Computer Science. He is a frequent speaker at various database related user groups and conferences.