IT Security is a hot topic in every organization, and in a hyper connected world the need to integrate thousands of IoT devices securely with many different systems at scale is critical.

AWS Secrets Manager helps customers manage their system credentials securely in the AWS Cloud, and with its integration with AWS IoT Greengrass, that capability now extends out to your edge-connected IoT devices.

In this two part blog post, I will walk through the steps to use this integration to give edge devices the capability to connect to and log incidents directly into ServiceNow. The credentials for connecting to ServiceNow are created in AWS Secrets Manager, and deployed locally (encrypted) to the edge device via AWS IoT Greengrass.

Part 1 (this post) gives an overview of the whole solution and the steps for setting up AWS Secrets Manager, creating the required IAM roles and AWS Lambda functions.  In part 2 of the blog we will then set up AWS IoT Greengrass and AWS IoT Core so that we can run the functions and access the secret on our edge device (Raspberry Pi).

Enabling edge devices to automatically raise incidents in your organization’s ITSM toolset ensures that you can use existing workflows and incident escalation paths for your edge devices.  Previously this would have been challenging to integrate. Additionally, by running this capability at the edge, it enables quicker responses and reduces the need to make calls back to the AWS Cloud.

The solution makes use of a Raspberry Pi, running AWS IoT Greengrass. AWS Lambda functions on AWS IoT Greengrass capture temperature and humidity sensor data and make calls directly to ServiceNow when thresholds are breached.  The integration of AWS Secrets Manager with AWS IoT Core enables the credentials required for the ServiceNow API calls to be available locally. These calls are encrypted and available on the Pi for the Lambda function to use.

The sensors for temperature and humidity in this example are on a Raspberry Pi Sense Hat, which illustrates sensors that could be used in an industrial or manufacturing use case.  You can use any type of sensor such as vibration, strain gauges, or other electro-mechanical sensors.

In order to have visibility of the sensor data, and to manage communications between the first and second Lambda functions, all data from the sensors is published to one IoT Topic Data related to any threshold breaches is published to another IoT Topic.

Following is a high-level diagram for the architecture used in this blog. 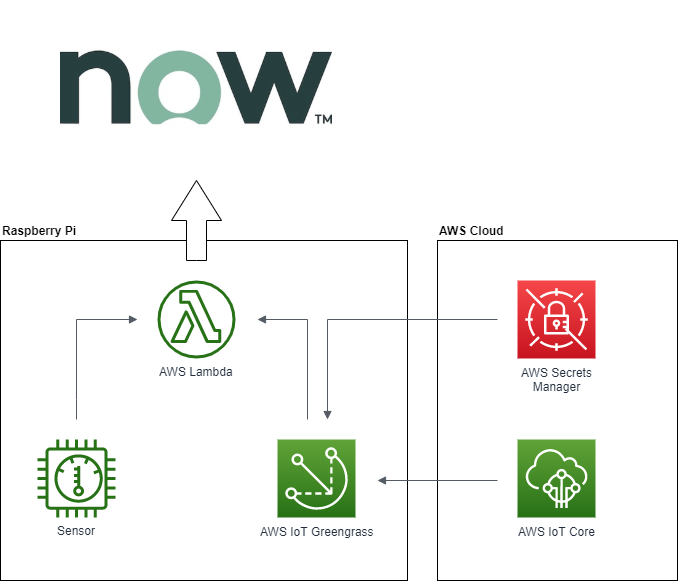 To complete the steps in this blog, you need:

Additionally, ensure that you have Python 3.7.x installed with the following Python modules on the Raspberry Pi (Raspian Buster includes Python 3.7 by default). Install the following packages as the root user (sudo pip):

I have taken the approach of having these modules installed on the Pi in order to simplify the creation of the Lambda function.  This ensures the function will run locally on the Pi rather than having to build all of the Python modules on the Pi and then zip them to run the Lambda in an AWS IoT Greengrass container.

The steps in the walkthrough can be achieved from the AWS console. I have focused on the command line approach, using the AWS CLI, as this will give a more detailed view of what is happening and the dependencies between the different components.  The overall sequence for the steps is:

I’ve structured the order of the steps in a logical sequence so that any dependencies of later steps are created first.  There are a number of places where a value in the output of one command (such as an ARN) needs to be noted as required for subsequent commands. At times the steps may seem counter-intuitive, but whilst developing this blog, I found this sequence has proven to be the most effective.

First, we create our ‘Secret’ in AWS Secrets Manager.  This consists of a secret string containing a JSON object for the username and password required for authentication to the API of my ServiceNow developer instance.  For the purposes of this example, we will use the default encryption key for the AWS Secrets Manager service.

The following command, from the AWS CLI, is used to create the new secret, entering the relevant username and password for the ServiceNow instance.

IMPORTANT: the name of the secret must start with “greengrass-“(specified in the command after the “–name” parameter) because the IAM Greengrass managed service role (which we will use later) has permission by default to access secrets that start with this text.

The successful completion of the *preceding command results in an output on your terminal screen, containing the ARN (Amazon Resource Name) for the new secret.

Then we run the following command, referencing the file just created:

And finally we need to attach the IAM managed AWS IoT Greengrass service role to our new custom role:

We also need a role for our Lambda functions with basic execution permissions; create a text file called lambda-role.json containing the following:

Then we run the following command, referencing the file just created:

And finally we need to attach the IAM managed Lambda basic execution role to our new custom role:

We now create the Lambda functions that will be deployed to Greengrass – these functions manage the interactions between the sensors and ServiceNow.

The first Lambda function reads the sensor data and publishes the data to an IoT Topic (IoTBlog/sensorData), every 5 seconds, which can then be used by downstream services for analytics.  This function also determines whether a threshold has been breached and if so, it publishes the data to a separate IoT Topic (IotBlog/anomaly) to which our second Lambda function is subscribed.

We create a text file lambda_function.py containing the code above and then compress into a zip file named lambda_function_1.zip.  Once this is done we can then create the function in AWS using the following command:

We create another text file, lambda_function.py containing the code above and then compress into a zip file named lambda_function_2.zip.  Once this is done we can then create the function in AWS using the following command:

In order to make use of Lambda functions in Greengrass we then need to publish a version of the function using the following command:

In this post, I showed you the steps for integrating IoT and ITSM by setting up AWS Secrets Manager, creating the required IAM roles and AWS Lambda functions.  Now you can proceed to part 2 of the blog to set up AWS IoT-Core and AWS IoT Greengrass to make use of the secret and functions that you created in this post.