This post is contributed by Bill Kerr and Raj Seshadri

For most customers, infrastructure is hardly done with CI/CD in mind. However, Infrastructure as Code (IaC) should be a best practice for DevOps professionals when they provision cloud-native assets. Microservice apps that run inside an Amazon EKS cluster often use CI/CD, so why not the cluster and related cloud infrastructure as well?

This blog demonstrates how to spin up cluster infrastructure managed by CI/CD using CDK code and SHI’s Cloud Resource Property Manager (CRPM) property files. Managing cloud resources is ultimately about managing properties, such as instance type, cluster version, etc. CRPM helps you organize all those properties by importing bite-sized YAML files, which are stitched together with CDK. It keeps all of what’s good about YAML in YAML, and places all of the logic in beautiful CDK code. Ultimately this improves productivity and reliability as it eliminates manual configuration steps. 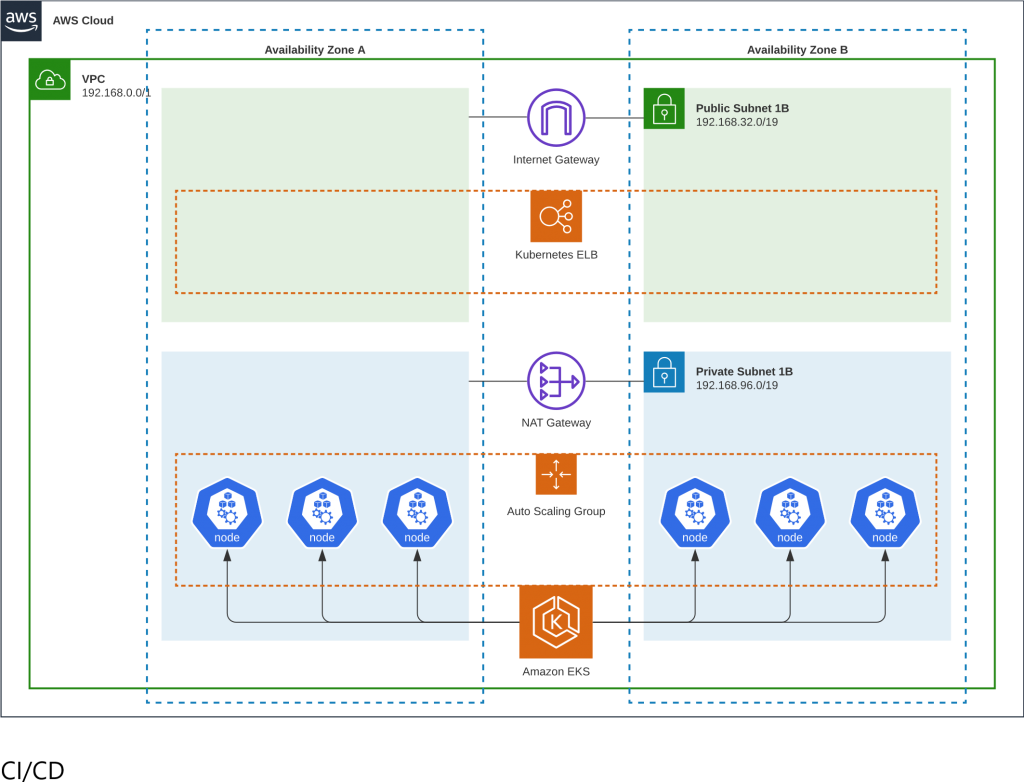 Changes to the primary (master) branch triggers a pipeline, which creates CloudFormation change sets for an Amazon EKS stack and a CI/CD stack. After human approval, the change sets are initiated (executed). 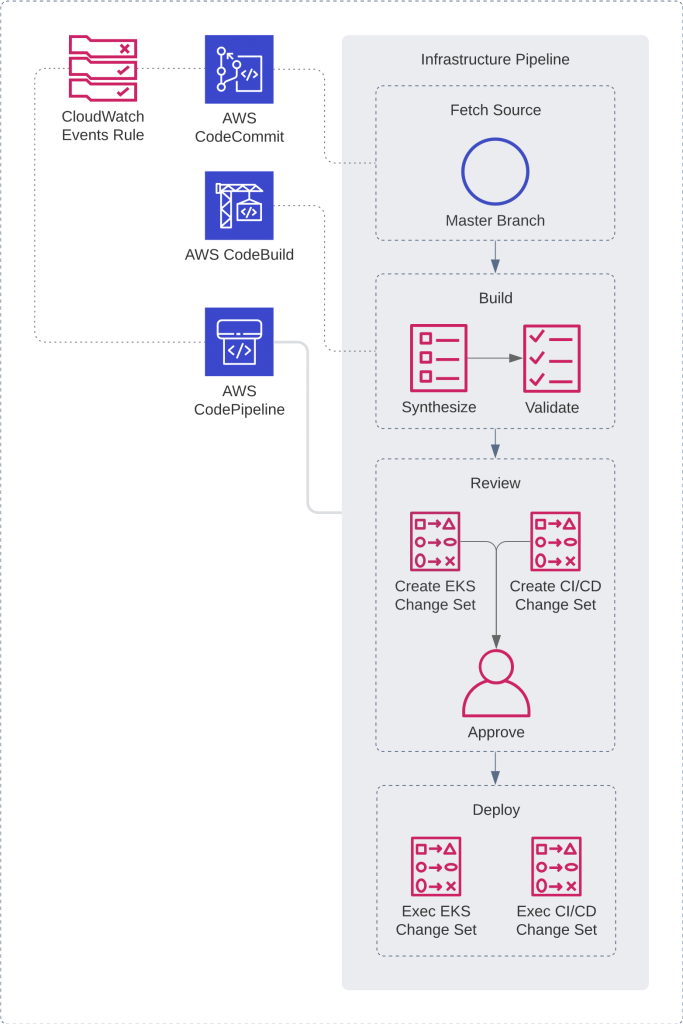 Get ready to deploy the CloudFormation stacks with CDK

First, to get started with CDK you spin up an AWS Cloud9 environment, which gives you a code editor and terminal that runs in a web browser. Using AWS Cloud9 is optional but highly recommended since it speeds up the process.

Download and install the dependencies and demo CDK application

In a terminal, let’s review the code used in this article and install it.

When creating an EKS cluster, the IAM role that was used to create the cluster is also the role that will be able to access it afterwards.

Let’s deploy a CloudFormation stack containing a role that will later be used to create the cluster and also to access it. While we’re at it, let’s also add our current user ARN to the role, so that we can assume the role.

Notice the Outputs section that shows up in the CDK deploy results, which contains the role name and the role ARN. You will need to copy and paste the role ARN (ex. arn:aws:iam::123456789012:role/eks-role-us-east-1) from your Outputs when deploying the next stack.

Now that we have a role created, it’s time to create the cluster using that role.

Deploy the stack containing the EKS cluster in a new VPC

Expect it to take over 20 minutes for this stack to deploy.

Navigate to this page in the AWS console if you would like to see your cluster, which is now ready to use.

If you are following along in Cloud9, you can skip configuring kubectl.

If you prefer to use kubectl installed somewhere else, now would be a good time to configure access to the newly created cluster by running the UpdateKubeConfigCommand mentioned in the Outputs section above. It requires that you have the AWS CLI installed and configured.

Now that the VPC and cluster have been created, it’s time to turn on CI/CD. This will create a cloned copy of github.com/shi/crpm-eks in CodeCommit. Then, an AWS CloudWatch Events rule will start watching the CodeCommit repo for changes and triggering a CI/CD pipeline that builds and validates CloudFormation templates, and executes CloudFormation change sets.

Deploy the stack containing the code repo and pipeline

Notice the Outputs section, which contains the CodeCommit repo name (ex. eks-ci-cd). This is where the code now lives that is being watched for changes.

Review the pipeline for the first time

Navigate to this page in the AWS console and you should see a new pipeline in progress. The pipeline is automatically run for the first time when it is created, even though no changes have been made yet. Open the pipeline and scroll down to the Review stage. You’ll see that two change sets were created in parallel (one for the EKS stack and the other for the CI/CD stack). 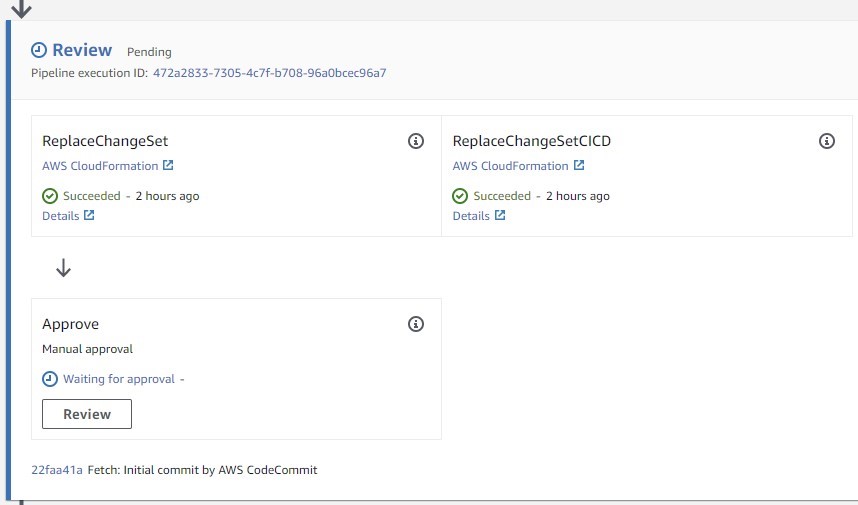 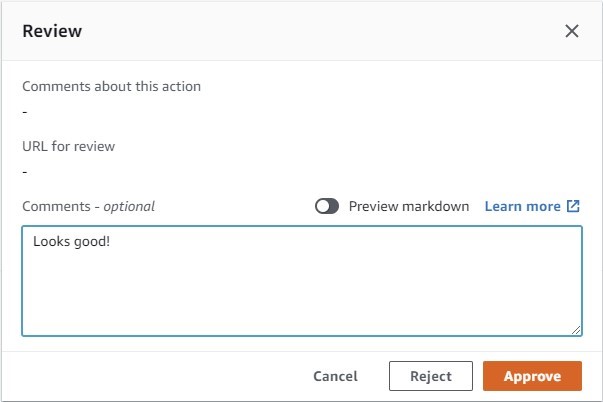 Now that the golden source that is being watched for changes lives in a AWS CodeCommit repo, we need to clone that repo and get rid of the repo we’ve been using up to this point.

If you are following along in AWS Cloud9, you can skip cloning the new repo because you are just going to discard the old AWS Cloud9 environment and start using a new one.

Now would be a good time to clone the newly created repo mentioned in the preceding Outputs section Next, delete the old repo that was cloned from GitHub at the beginning of this blog. You can visit this repository to get the clone URL for the repo.

Review this documentation for help with accessing your repo using SSH.

If you are NOT using Cloud9, you can skip this section.

To make life easy, let’s create another Cloud9 environment that has kubectl preconfigured and ready to use, and also has the new CodeCommit repo checked out and ready to edit.

Although kubectl and the code are now ready to use, we still have to manually configure Cloud9 to stop using AWS managed temporary credentials in order for kubectl to be able to access the cluster with the management role. Here’s how to do that and test kubectl:

1. Navigate to this page in the AWS console.
2. In Your environments, select Open IDE for the newly created environment (possibly named eks-ide).
3. Once opened, navigate at the top to AWS Cloud9 -> Preferences.
4. Expand AWS SETTINGS, and under Credentials, disable AWS managed temporary credentials by selecting the toggle button. Then, close the Preferences tab.
5. In a terminal in Cloud9, enter aws configure. Then, answer the questions by leaving them set to None and pressing enter, except for Default region name. Set the Default region name to the current region that you created everything in. The output should look similar to:

If everything is working properly, you should see two nodes appear in the output similar to:

You can use kubectl from this IDE to control the cluster. When you close the IDE browser window, the Cloud9 environment will automatically shutdown after 30 minutes and remain offline until the next time you reopen it from the AWS console. So, it’s a cheap way to have a kubectl terminal ready when needed.

If you have been following along using Cloud9 the whole time, then you should have two Cloud9 environments running at this point (one that was used to initially create everything from code in GitHub, and one that is now ready to edit the CodeCommit repo and control the cluster with kubectl). It’s now a good time to delete the old Cloud9 environment.

Now you should be down to having just one AWS Cloud9 environment that was created when you deployed the ide stack.

Trigger the pipeline to change the infrastructure

Now that we have a cluster up and running that’s defined in code stored in a AWS CodeCommit repo, it’s time to make some changes:

1.     In the code that was checked out from AWS CodeCommit, open up res/compute/eks/nodegroup/props.yaml. At the bottom of the file, try changing minSize from 1 to 4, desiredSize from 2 to 6, and maxSize from 3 to 6 as seen in the following screenshot. Then, save the file and close it. The res (resource) directory is your well organized collection of resource properties files. 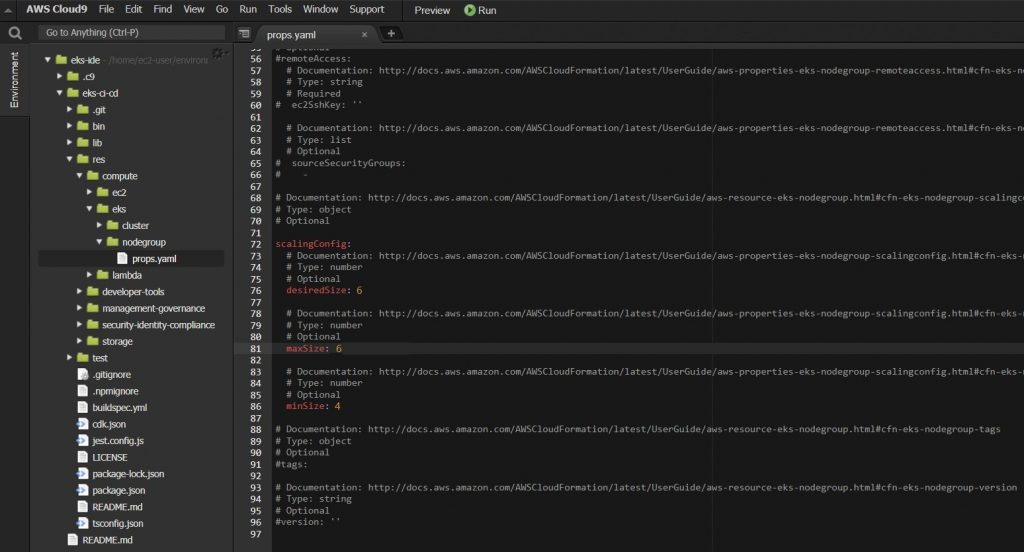 4.     Navigate to this page in the AWS console and you should see your pipeline in progress.

5.     Wait for the Review stage to become Pending.

6.       Following the Approve action box, click the blue link to the left of “Fetch: …” to see the infrastructure code changes that triggered the pipeline. You should see the two code changes you committed above.

7.     After reviewing the changes, go back and select Review to open an approval popup.

8.     In the approval popup, enter a comment and select Approve.

9.     Wait for the pipeline to finish the Deploy stage as it executes the two change sets. You can refresh the page until you see it has finished. It should take a few minutes.

10.     To see that the CodeBuild change has been made, scroll up to the Build stage of the pipeline and click on the AWS CodeBuild link as shown in the following screenshot. 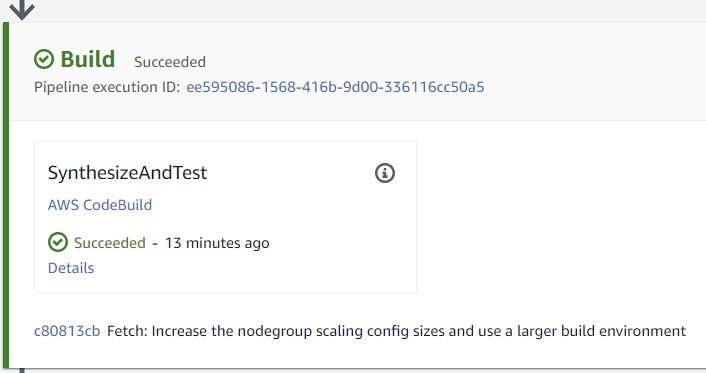 11.     Next,  select the Build details tab, and you should determine that your Compute size has been upgraded to 7 GB memory, 4 vCPUs as shown in the following screenshot. 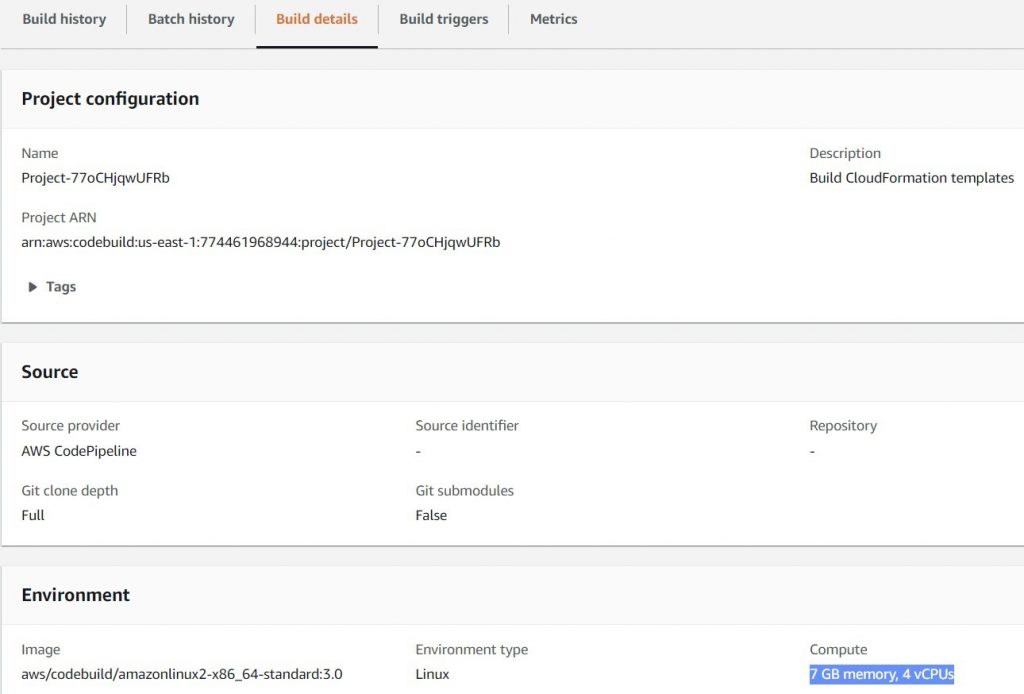 12.     By this time, the cluster nodegroup sizes are probably updated. You can confirm with kubectl in a terminal.

If everything is ready, you should see six (desired size) nodes appear in the output similar to:

Cluster is now manageable by code

You now have a cluster than can be maintained by simply making changes to code! The only resources not being managed by CI/CD in this demo, are the management role, and the optional AWS Cloud9 IDE. You can log into the AWS console and edit the role, adding other Trust relationships in the future, so others can assume the role and access the cluster.

Do not try to delete all of the stacks at once! Wait for the stack(s) in a step to finish deleting before moving onto the next step.

1. Navigate to this page in the AWS console.
2. Delete the two IDE stacks first (the ide stack spawned another stack).
3. Delete the ci-cd stack.
4. Delete the cluster stack (this one takes a long time).
5. Delete the role stack.

Cloud Resource Property Manager (CRPM) is an open source project maintained by SHI, hosted on GitHub, and available through npm.

In this blog, we demonstrated how you can spin up an Amazon EKS cluster managed by CI/CD using CDK code and Cloud Resource Property Manager (CRPM) property files. Making updates to this cluster is as easy as modifying the property files and updating the AWS CodePipline. Using CRPM can improve productivity and reliability because it eliminates manual configurations steps.