Today I’m excited to announce built-in authentication support in Application Load Balancers (ALB). ALB can now securely authenticate users as they access applications, letting developers eliminate the code they have to write to support authentication and offload the responsibility of authentication from the backend. The team built a great live example where you can try out the authentication functionality.

Identity-based security is a crucial component of modern applications and as customers continue to move mission critical applications into the cloud, developers are asked to write the same authentication code again and again. Enterprises want to use their on-premises identities with their cloud applications. Web developers want to use federated identities from social networks to allow their users to sign-in. ALB’s new authentication action provides authentication through social Identity Providers (IdP) like Google, Facebook, and Amazon through Amazon Cognito. It also natively integrates with any OpenID Connect protocol compliant IdP, providing secure authentication and a single sign-on experience across your applications.

How Does ALB Authentication Work?

Authentication is a complicated topic and our readers may have differing levels of expertise with it. I want to cover a few key concepts to make sure we’re all on the same page. If you’re already an authentication expert and you just want to see how ALB authentication works feel free to skip to the next section!

When we get away from the terminology for a bit, all of this boils down to figuring out who a user is and what they’re allowed to do. Doing this securely and efficiently is hard. Traditionally, enterprises have used a protocol called SAML with their IdPs, to provide a single sign-on (SSO) experience for their internal users. SAML is XML heavy and modern applications have started using OIDC with JSON mechanism to share claims. Developers can use SAML in ALB with Amazon Cognito’s SAML support. Web app or mobile developers typically use federated identities via social IdPs like Facebook, Amazon, or Google which, conveniently, are also supported by Amazon Cognito.

ALB Authentication works by defining an authentication action in a listener rule. The ALB’s authentication action will check if a session cookie exists on incoming requests, then check that it’s valid. If the session cookie is set and valid then the ALB will route the request to the target group with X-AMZN-OIDC-* headers set. The headers contain identity information in JSON Web Token (JWT) format, that a backend can use to identify a user. If the session cookie is not set or invalid then ALB will follow the OIDC protocol and issue an HTTP 302 redirect to the identity provider. The protocol is a lot to unpack and is covered more thoroughly in the documentation for those curious.

I have a simple Python flask app in an Amazon Elastic Container Service (Amazon ECS) cluster running in some AWS Fargate containers. The containers are in a target group routed to by an ALB. I want to make sure users of my application are logged in before accessing the authenticated portions of my application. First, I’ll navigate to the ALB in the console and edit the rules.

I want to make sure all access to /account* endpoints is authenticated so I’ll add new rule with a condition to match those endpoints.

Now, I’ll add a new rule and create an Authenticate action in that rule.

I’ll have ALB create a new Amazon Cognito user pool for me by providing some configuration details. 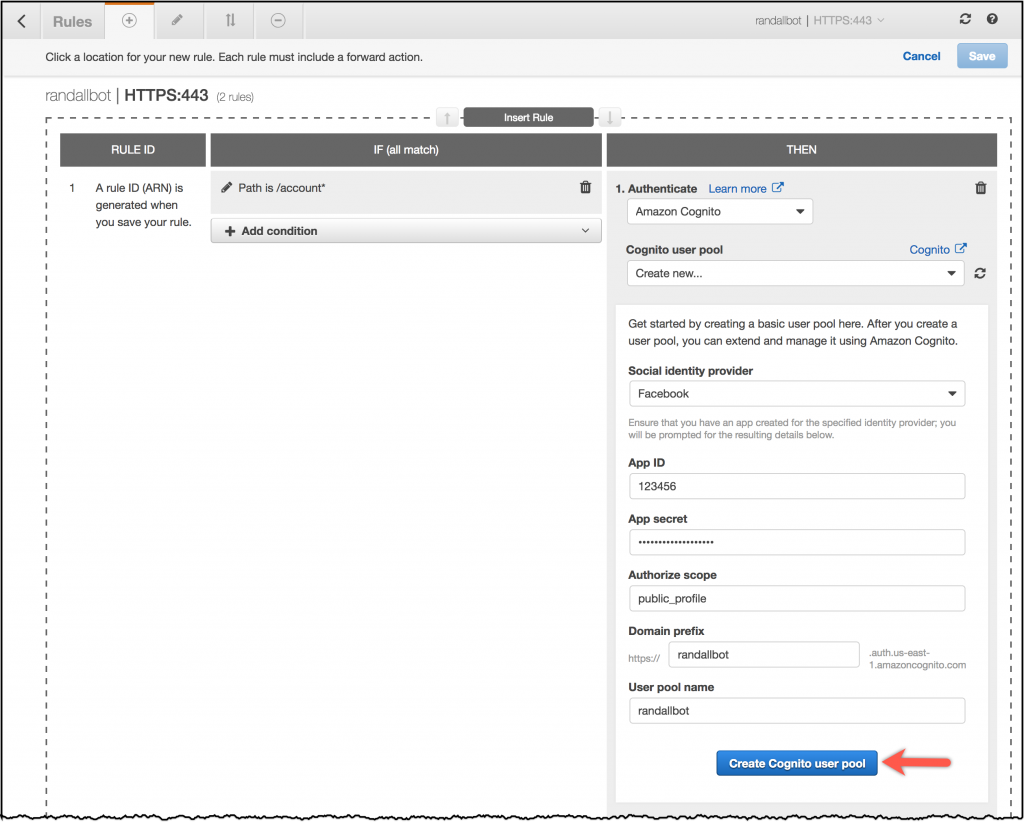 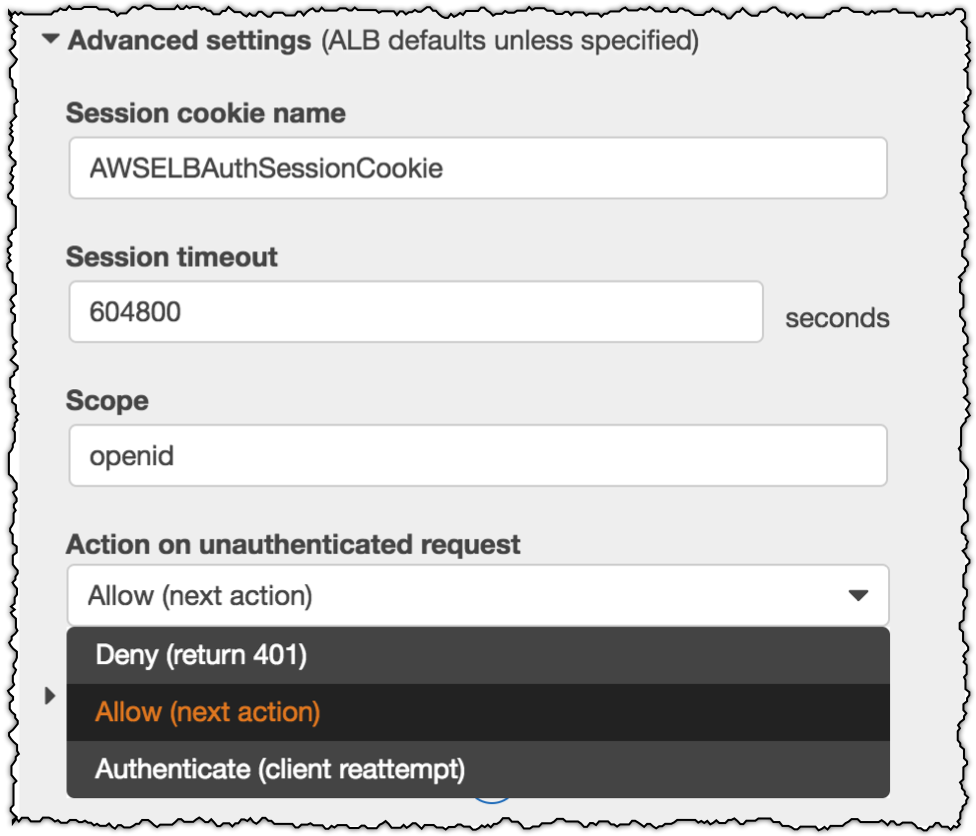 After creating the Amazon Cognito pool, I can make some additional configuration in the advanced settings.

I can change the default cookie name, adjust the timeout, adjust the scope, and choose the action for unauthenticated requests.

I can pick Deny to serve a 401 for all unauthenticated requests or I can pick Allow which will pass through to the application if unauthenticated. This is useful for Single Page Apps (SPAs). For now, I’ll choose Authenticate, which will prompt the IdP, in this case Amazon Cognito, to authenticate the user and reload the existing page.

Now I’ll add a forwarding action for my target group and save the rule.

Over on the Facebook side I just need to add my Amazon Cognito User Pool Domain to the whitelisted OAuth redirect URLs. 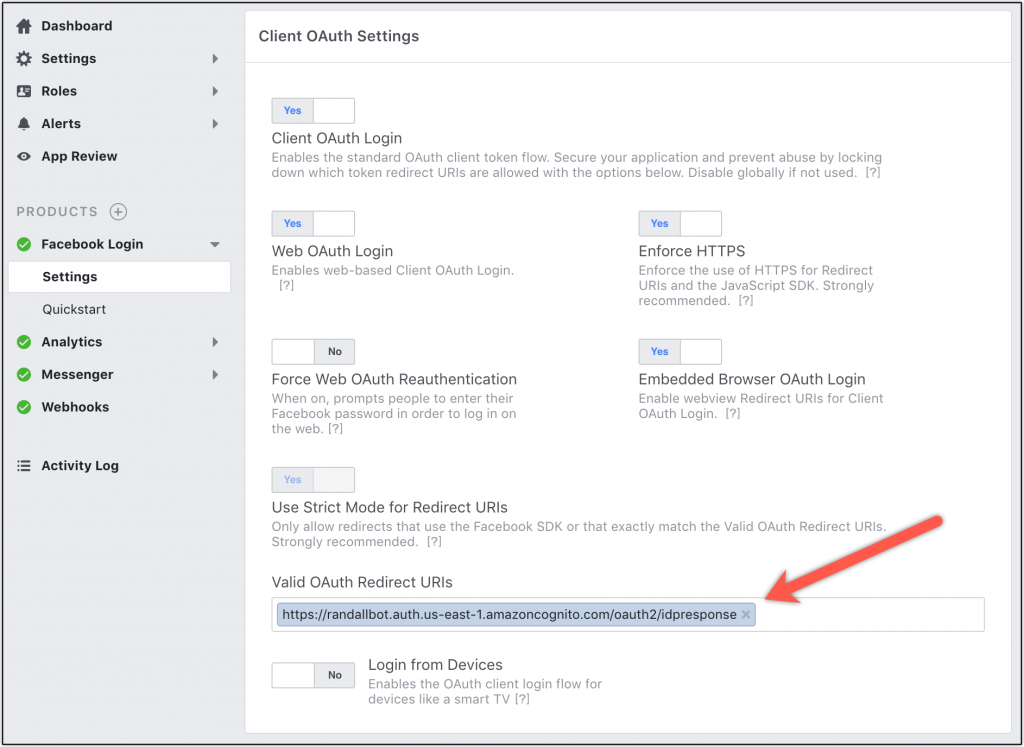 I would follow similar steps for other authentication providers.

Now, when I navigate to an authenticated page my Fargate containers receive the originating request with the X-Amzn-Oidc-* headers set by ALB. Using the information in those headers (claims-data, identity, access-token) my application can implement authorization.

All of this was possible without having to write a single line of code to deal with each of the IdPs. However, it’s still important for the implementing applications to verify the signature on the JWT header to ensure the request hasn’t been tampered with.

Of course everything we’ve seen today is also available in the the API and AWS Command Line Interface (CLI). You can find additional information on the feature in the documentation. This feature is provided at no additional charge.

Be sure to check out the live example as well.

With authentication built-in to ALB, developers can focus on building their applications instead of rebuilding authentication for every application, all the while maintaining the scale, availability, and reliability of ALB. I think this feature is a pretty big deal and I can’t wait to see what customers build with it. Let us know what you think of this feature in the comments or on twitter!