The Dense Compute nodes feature a high ratio of CPU power, RAM, and I/O performance to storage, making them ideal hosts for data warehouses where high performance is essential. You can start small, with a single Large node for $0.25/hour, and scale all the way up to a cluster with thousands of cores, terabytes of RAM, and hundreds of terabytes of SSD storage.

If you have less than 500 GB of compressed data, your lowest cost and highest performance option is Dense Compute. Above that, if you care primarily about performance, you can stay with Dense Compute and scale all the way up to clusters with thousands of cores, terabytes of RAM and hundreds of terabytes of SSD storage. Or, at any point, you can use switch over to our existing Dense Storage nodes that scale from terabytes to petabytes for little as $1,000 / TB / Year. Amazon Redshifts resize feature lets you easily change node types or cluster sizes with a few clicks in the Console: 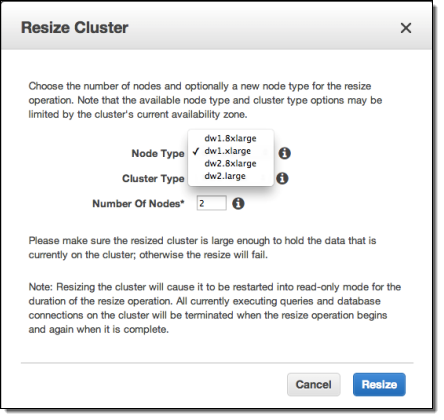 All of the features that have made Redshift such a big hit are available on the Dense Compute nodes including fast provisioning, automatic patching, continuous backups to Amazon S3, fast restores, failure handling, cross-region disaster recovery, and encryption of data at rest and in transit.

On-Demand prices for a single Large Dense Compute node start at just $0.25 per hour in the US East (Northern Virginia) Region; this drops down to an effective price of $0.10 (ten cents!) per hour with a Three Year Reserved Instance. Like the Dense Storage nodes, the new Dense Compute nodes are available in the following AWS Regions:

The new nodes are available today and you can use them to create your data warehouse now!