A few months ago, I introduced the AWS CodeStar service, which allows you to quickly develop, build, and deploy applications on AWS. AWS CodeStar helps development teams to increase the pace of releasing applications and solutions while reducing some of the challenges of building great software.

As I have participated in some of the AWS Summits around the world discussing AWS CodeStar, many of you have shown curiosity in learning about the availability of .NET templates in CodeStar and utilizing CodeStar to deploy .NET applications. Therefore, it is with great pleasure and excitement that I announce that you can now develop, build, and deploy cross-platform .NET Core applications with the AWS CodeStar and AWS CodeBuild services.

AWS CodeBuild has added the ability to build and deploy .NET Core application code to both Amazon EC2 and AWS Lambda. This new CodeBuild capability has enabled the addition of two new project templates in AWS CodeStar for .NET Core applications.  These new project templates enable you to deploy .NET Code applications to Amazon EC2 Linux Instances, and provides everything you need to get started quickly, including .NET Core sample code and a full software development toolchain.

So, let’s get started!

First, I’ll log into the CodeStar console and start a new CodeStar project. I am presented with the option to select a project template. 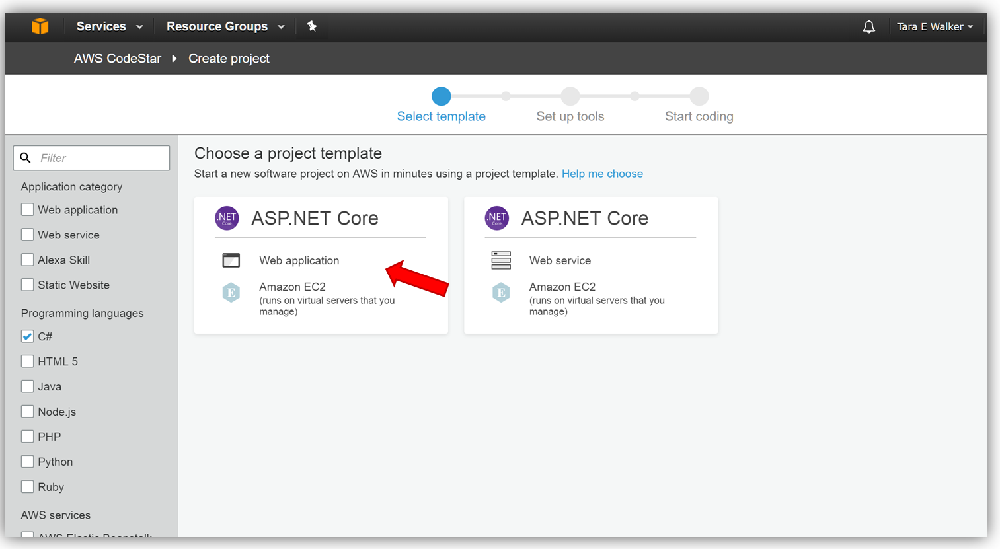 My hunch about the services is confirmed on the next screen when CodeStar shows the AWS CodePipeline and the AWS services that will be configured for my new project. I’ll name this web application project, ASPNetCore4Tara, and leave the default Project ID that CodeStar generates from the project name. Yes, I know that this is one of the goofiest names I could ever come up with, but, hey, it will do for this test project so I’ll go ahead and click the Next button. I should mention that you have the option to edit your Amazon EC2 configuration for your project on this screen before CodeStar starts configuring and provisioning the services needed to run your application. 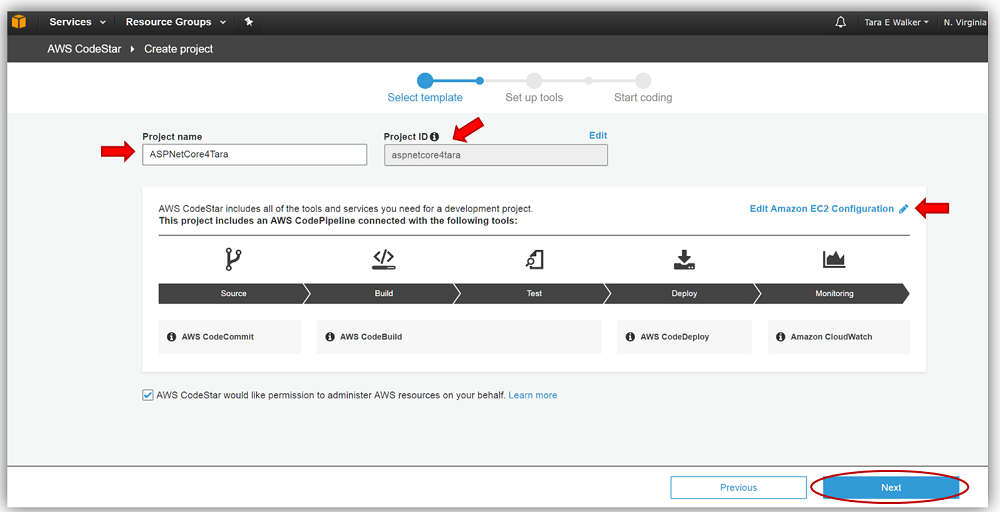 Since my ASP.Net Core web application will be deployed to an Amazon EC2 instance, I will need to choose an Amazon EC2 Key Pair for encryption of the login used to allow me to SSH into this instance. For my ASPNetCore4Tara project, I will use an existing Amazon EC2 key pair I have previously used for launching my other EC2 instances. However, if I was creating this project and I did not have an EC2 key pair or if I didn’t have access to the .pem file (private key file) for an existing EC2 key pair, I would have to first visit the EC2 console and create a new EC2 key pair to use for my project. This is important because if you remember, without having the EC2 key pair with the associated .pem file, I would not be able to log into my EC2 instance.

With my EC2 key pair selected and confirmation that I have the related private file checked, I am ready to click the Create Project button. 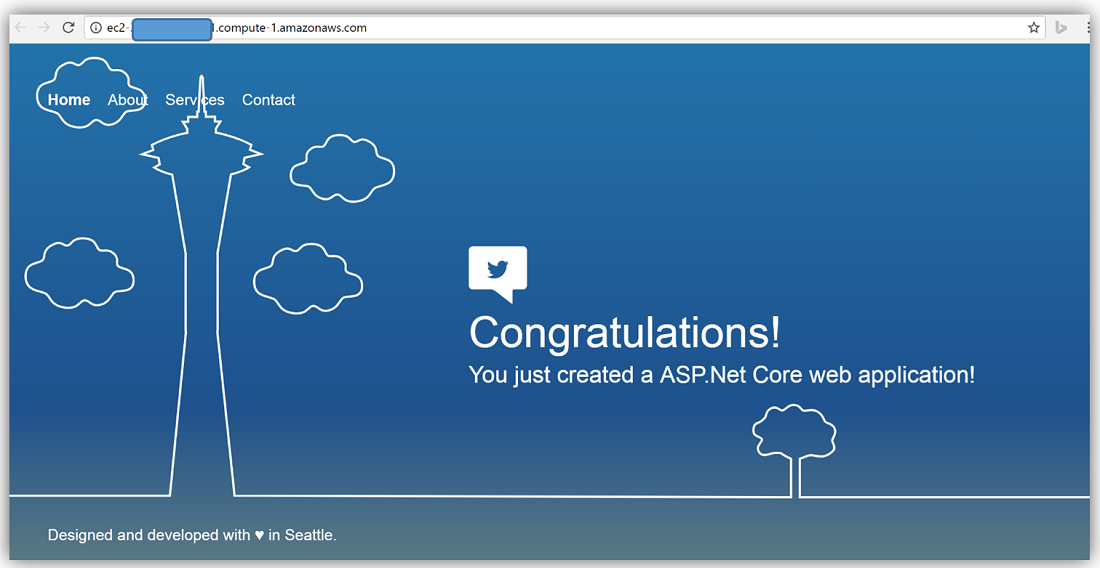 Now I’ll go ahead and clone the generated project and connect my Visual Studio IDE to the project repository. I am going to make some changes to the application and since AWS CodeBuild now supports .NET Core builds and deployments to both Amazon EC2 and AWS Lambda, I will alter my build specification file appropriately for the changes to my web application that will include the use of the Lambda function.  Don’t worry if you are not familiar with how to clone the project and connect it to the Visual Studio IDE, CodeStar provides in-console step-by-step instructions to assist you.

In order to connect to my repo within Visual Studio, I will open up Team Explorer and select the Connect link under the AWS CodeCommit option under Hosted Service Providers. I will click Ok to keep my default AWS profile toolkit credentials. 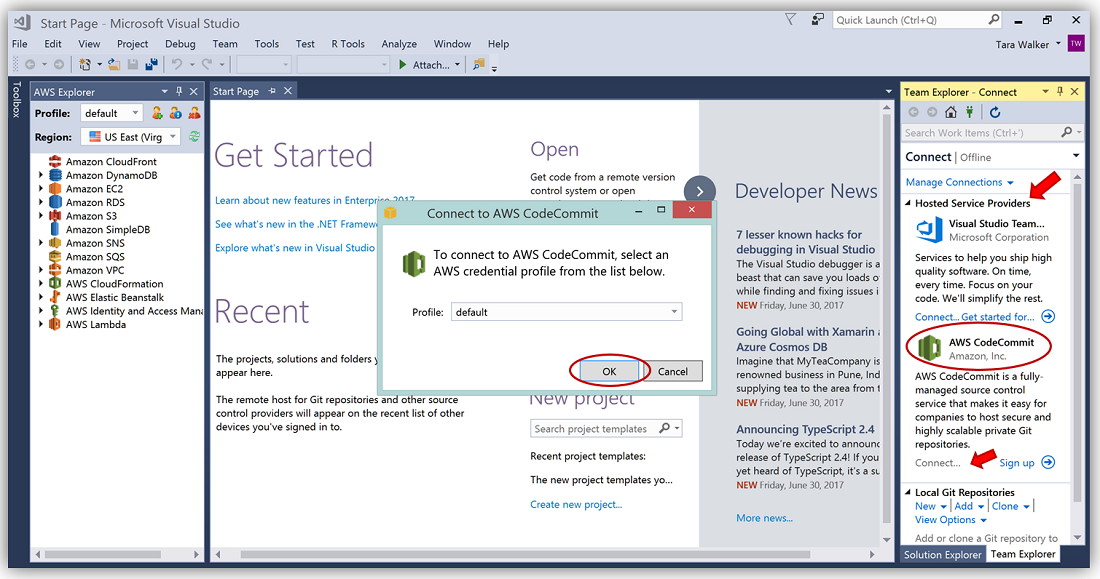 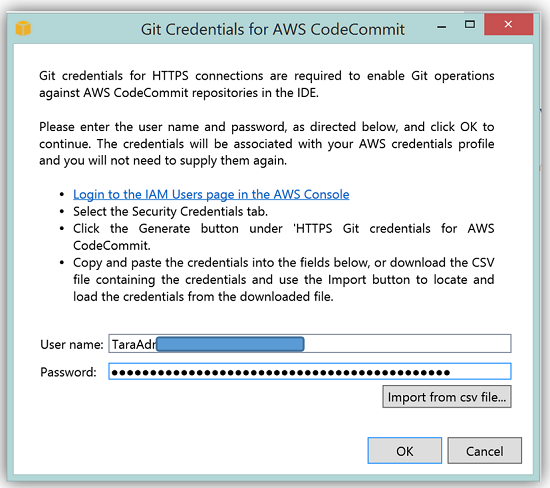 My project is now connected to the aspnetcore4tara CodeCommit repository and my web application is loaded to editing. As you will notice in the screenshot below, the sample project is structured as a standard ASP.NET Core MVC web application.

With the project created, I can make changes and updates. Since I want to update this project with a .NET Lambda function, I’ll quickly start a new project in Visual Studio to author a very simple C# Lambda function to be compiled with the CodeStar project. This AWS Lambda function will be included in the CodeStar ASP.NET Core web application project.

The Lambda function I’ve created makes a call to the REST API of NASA’s popular Astronomy Picture of the Day website. The API sends back the latest planetary image and related information in JSON format. You can see the Lambda function code below.

I’ll now publish this C# Lambda function and test by using the Publish to AWS Lambda option provided by the AWS Toolkit for Visual Studio with NASAPicOfTheDay project. After publishing the function, I can test it and verify that it is working correctly within Visual Studio and/or the AWS Lambda console. You can learn more about building AWS Lambda functions with C# and .NET at: http://docs.aws.amazon.com/lambda/latest/dg/dotnet-programming-model.html 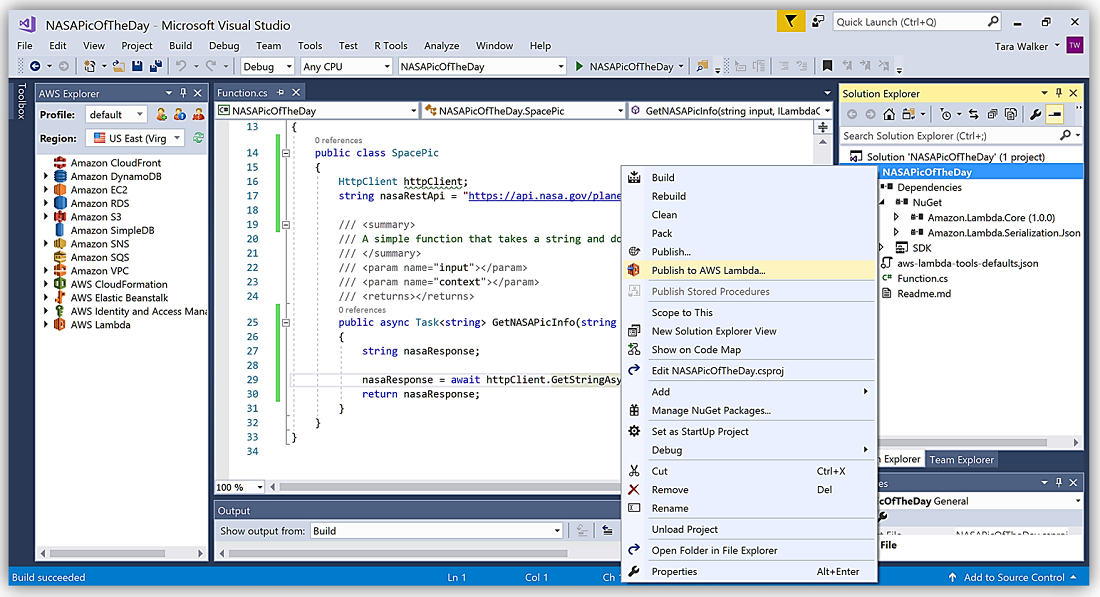 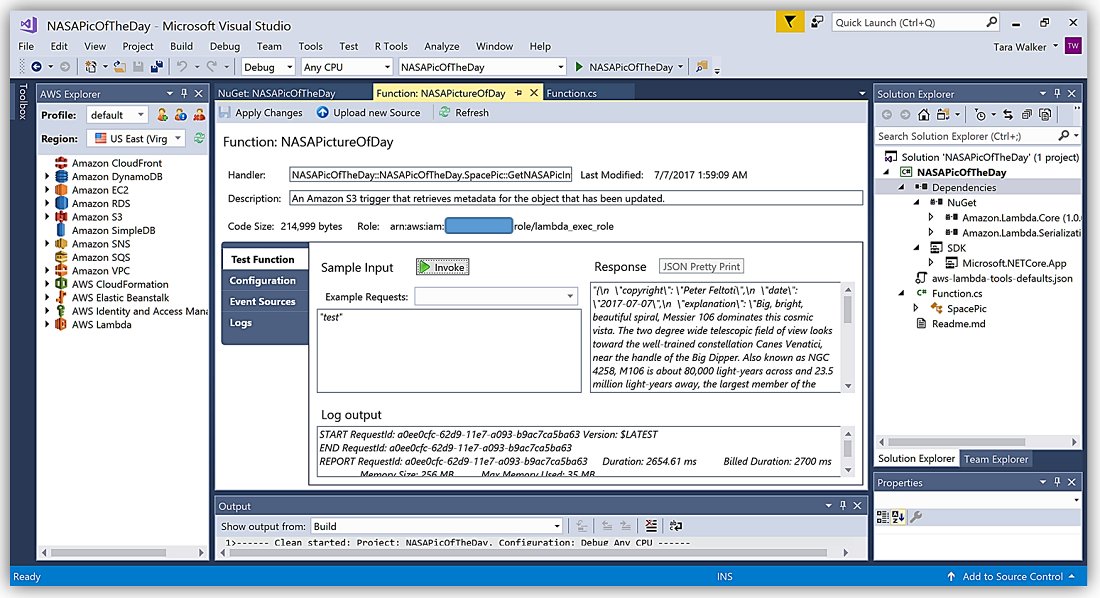 Now that I have my Lambda function completed and tested, all that is left is to update the CodeBuild buildspec.yml file within my aspnetcore4tara CodeStar project to include publishing and deploying of the Lambda function.

To accomplish this, I will create a new folder named functions and copy the folder that contains my Lambda function .NET project to my aspnetcore4tara web application project directory. 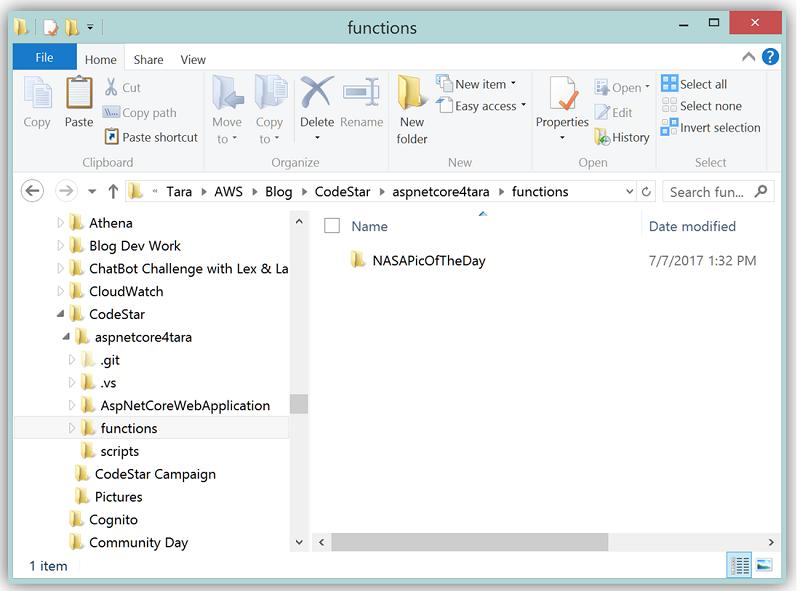 That’s it! All that is left is for me to add and commit all my file additions and updates to the AWS CodeCommit git repository provisioned for my ASPNetCore4Tara project. This kicks off the AWS CodePipeline for the project which will now use AWS CodeBuild new support for .NET Core to build and deploy both the ASP.NET Core web application and the .NET AWS Lambda function.