Last year I told you about the new AWS Application Load Balancer (an important part of Elastic Load Balancing) and showed you how to set it up to route incoming HTTP and HTTPS traffic based on the path element of the URL in the request. This path-based routing allows you to route requests to, for example, /api to one set of servers (also known as target groups) and /mobile to another set. Segmenting your traffic in this way gives you the ability to control the processing environment for each category of requests. Perhaps /api requests are best processed on Compute Optimized instances, while /mobile requests are best handled by Memory Optimized instances.

Host-Based Routing & More Rules
Today we are giving you another routing option. You can now create Application Load Balancer rules that route incoming traffic based on the domain name specified in the Host header. Requests to api.example.com can be sent to one target group, requests to mobile.example.com to another, and all others (by way of a default rule) can be sent to a third. You can also create rules that combine host-based routing and path-based routing. This would allow you to route requests to api.example.com/production and api.example.com/sandbox to distinct target groups.

In the past, some of our customers set up and ran a fleet of proxy servers and used them for host-based routing. With today’s launch, the proxy server fleet is no longer needed since the routing can be done using Application Load Balancer rules. Getting rid of this layer of processing will simplify your architecture and reduce operational overhead.

Application Load Balancer already provides several features that support container-based applications including port mapping, health checks, and service discovery. The ability to route on both host and path allows you to build and efficiently scale applications that are comprised of multiple microservices running in individual Amazon EC2 Container Service containers. You can use host-based routing to further simplify your service discovery mechanism by aligning your service names and your container names.

As part of today’s launch we are raising the maximum number of rules per Application Load Balancer from 10 to 75, and also introducing a new rule editor. I’ll start with the following target groups:

The Load Balancing Console shows the listeners that are associated with my Application Load Balancer: From there I simply click on View/edit rules to access the new rule editor:

I already have a default rule that forwards all requests to my web-target-production target:

I click on the Insert icon (the “+” sign) and then select a location. Rules are processed in the order that they are displayed:

I click on Insert Rule and define my new rule. Rules can reference a host, a path, or both. I’ll start with just a host:

I add two rules for host-based routing and the editor now looks like this:

If I want to route production and sandbox traffic to distinct targets, I can create new rules that reference the path. Here’s the first one:

With a few more clicks and a little typing I can create a powerful set of rules: 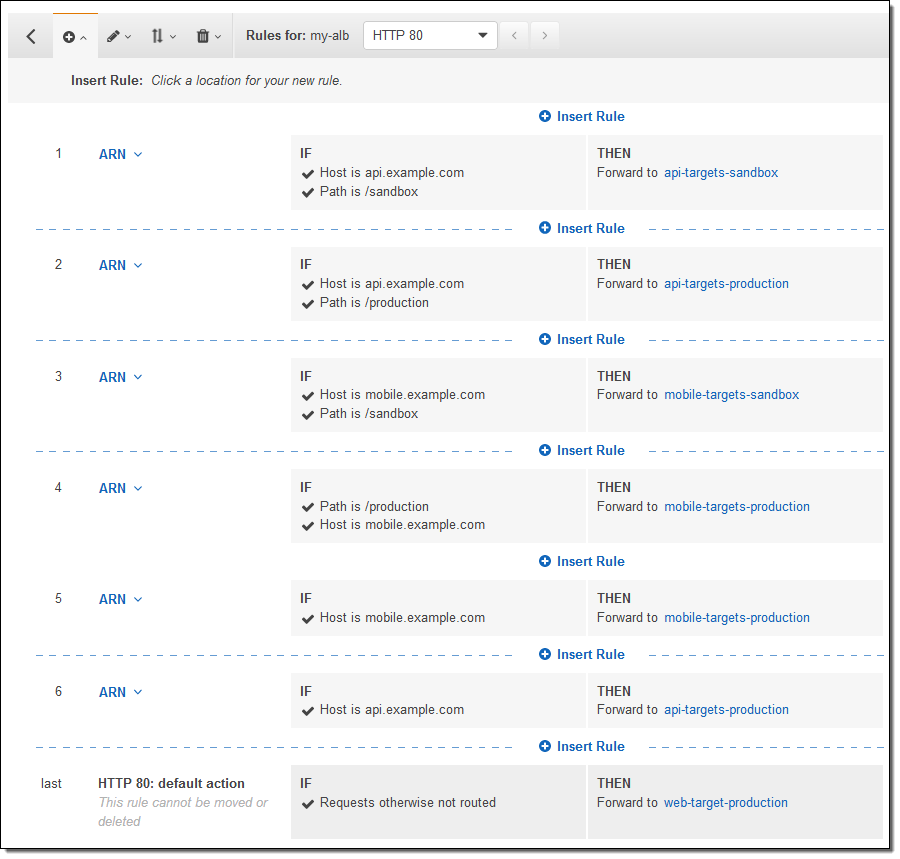 Rules that match the Host header can include up to three “*” (match 0 or more characters) or “?” (match 1 character) wildcards. Let’s say that I give each of my large customers a unique host name for tracking purposes. I can write rules that route all of the requests to the same target group, regardless of the final portion of the host name. Here’s a simple example:

The pencil icon in the rule editor allows me to make changes to the rule sequence. I select rules, move them to a new position, and then save the updated sequence: 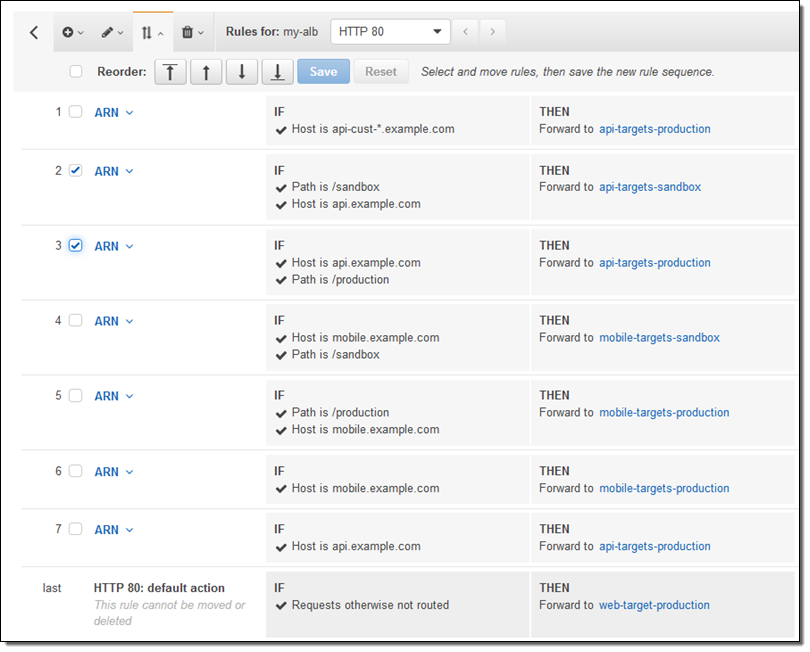 I can also edit existing rules or delete unneeded ones.

Available Now
This feature is available today in all 15 AWS public AWS regions.

There is no extra charge for the first 10 rules (host-based, path-based, or both) evaluated by each load balancer. After that you will be charged based on the number of rule evaluations (this is a new dimension added to the Load Balancer Capacity units (LCU) model that I described in an earlier post). Each LCU supports up to 1000 rule evaluations. We measure on all four dimensions of the LCU, but you are charged only for the dimension with the highest usage in the given hour. Rules that are configured, but not processed will not be charged.