CI/CD in the context of application development is a well-understood topic, and developers can choose from numerous patterns and tools to build their pipelines to handle the build, test, and deploy cycle when a new commit gets into version control. For stored procedures or even schema changes that are directly related to the application, this is typically part of the code base and is included in the code repository of the application. These changes are then applied when the application gets deployed to the test or prod environment/.

This post demonstrates how you can apply the same set of approaches to stored procedures, and even schema changes to data warehouses like Amazon Redshift.

Stored procedures are considered code and as such should undergo the same rigor as application code. This means that the pipeline should involve running tests against changes to make sure that no regressions are introduced to the production environment. Because we automate the deployment of both stored procedures and schema changes, this significantly reduces inconsistencies in between environments.

The following diagram illustrates our solution architecture. We use AWS CodeCommit to store our code, AWS CodeBuild to run the build process and test environment, and AWS CodePipeline to orchestrate the overall deployment, from source, to test, to production.

We discuss each service component in more detail later in the post.

You can see how all these components work together by completing the following steps:

The CloudFormation template and the source code for the example application are available in the GitHub repo. Before you get started, you need to clone the repository using the following command:

This creates a new folder, amazon-redshift-devops-blog, with the files inside.

The CloudFormation stack creates the VPC, Amazon Redshift clusters, CodeCommit repository, CodeBuild projects for both test and prod, and the pipeline using CodePipeline to orchestrate the change release process.

The username must be 1–128 alphanumeric characters, and it can’t be a reserved word.

Please note that production credentials could be created separately by privileged admins, and you could pass in the ARN of a pre-existing secret instead of the actual password if you so choose.

You can choose the refresh icon on the stack’s Events page to track the progress of the stack creation. 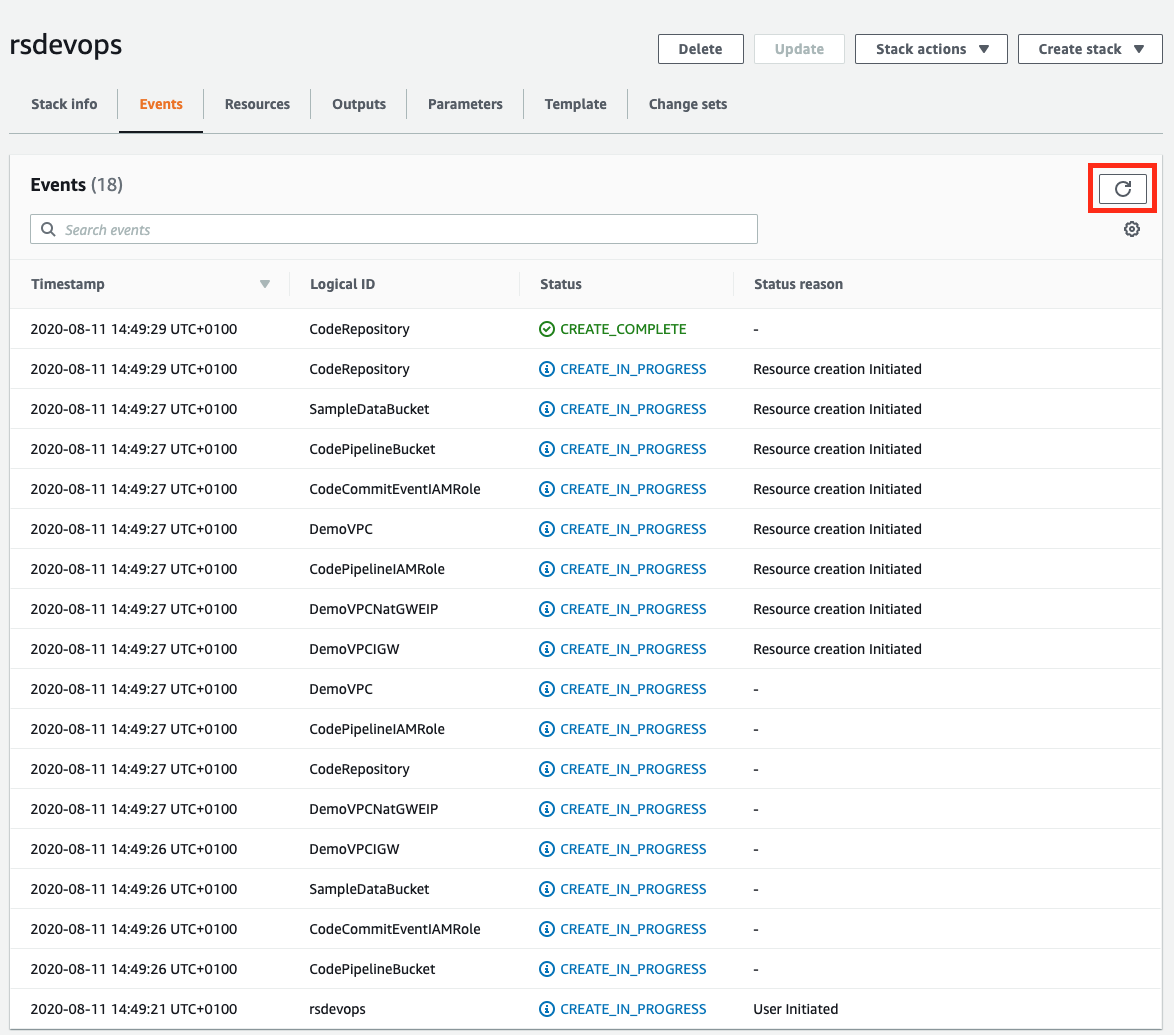 Push code to the CodeCommit repository

When stack creation is complete, go to the CodeCommit console. Locate the redshift-devops-repo repository that the stack created. Choose the repository to view its details. 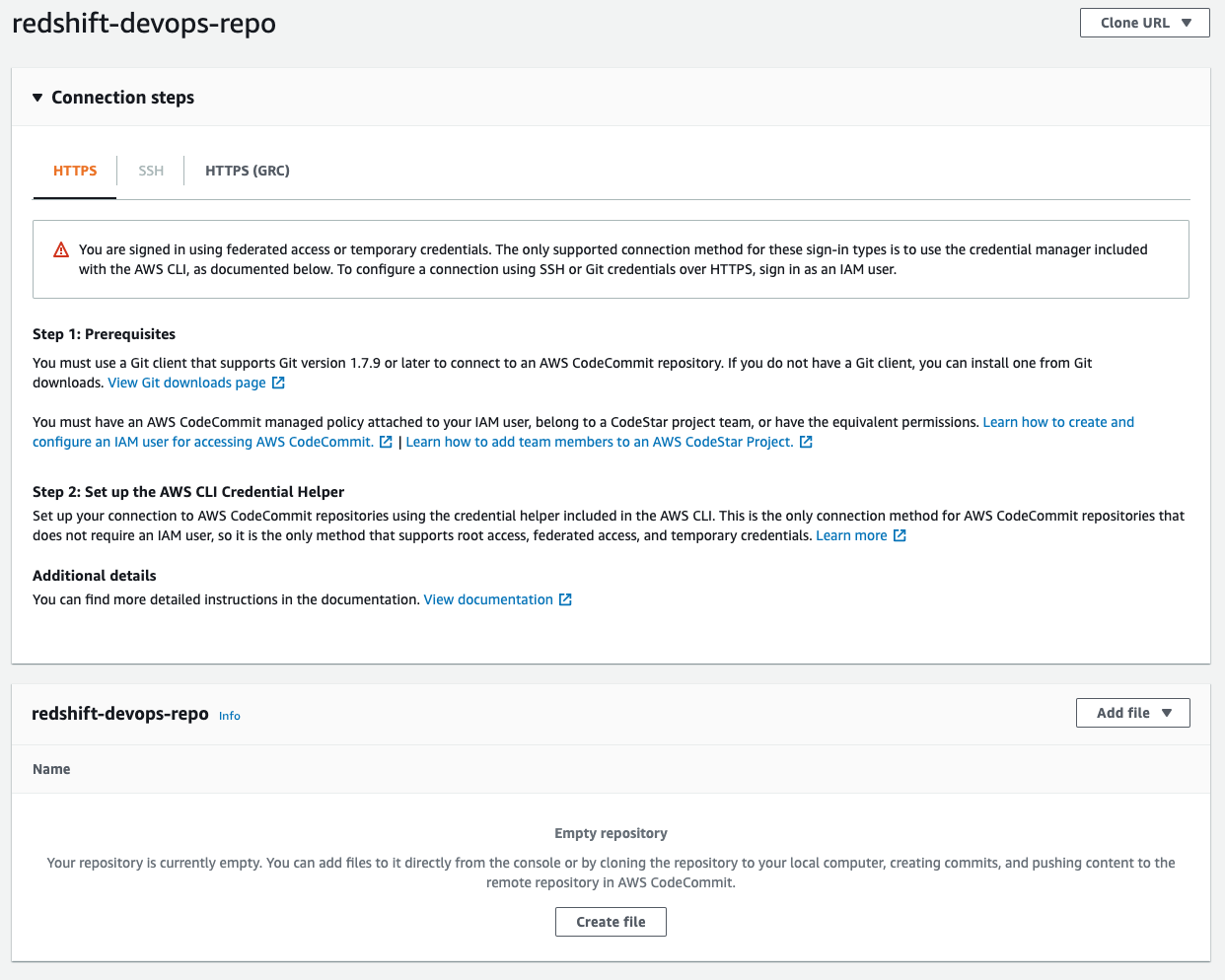 The last step populates the repository; you can check it by refreshing the CodeCommit console. If you get prompted for a user name and password, enter the Git credentials that you generated and downloaded from Step 3 of the Setup for HTTPS users using Git credentials

After you push the code to the CodeCommit repository, this triggers the pipeline to deploy the code into both the test and prod Amazon Redshift clusters. You can monitor the progress on the CodePipeline console.

To dive deeper into the progress of the build, choose Details. 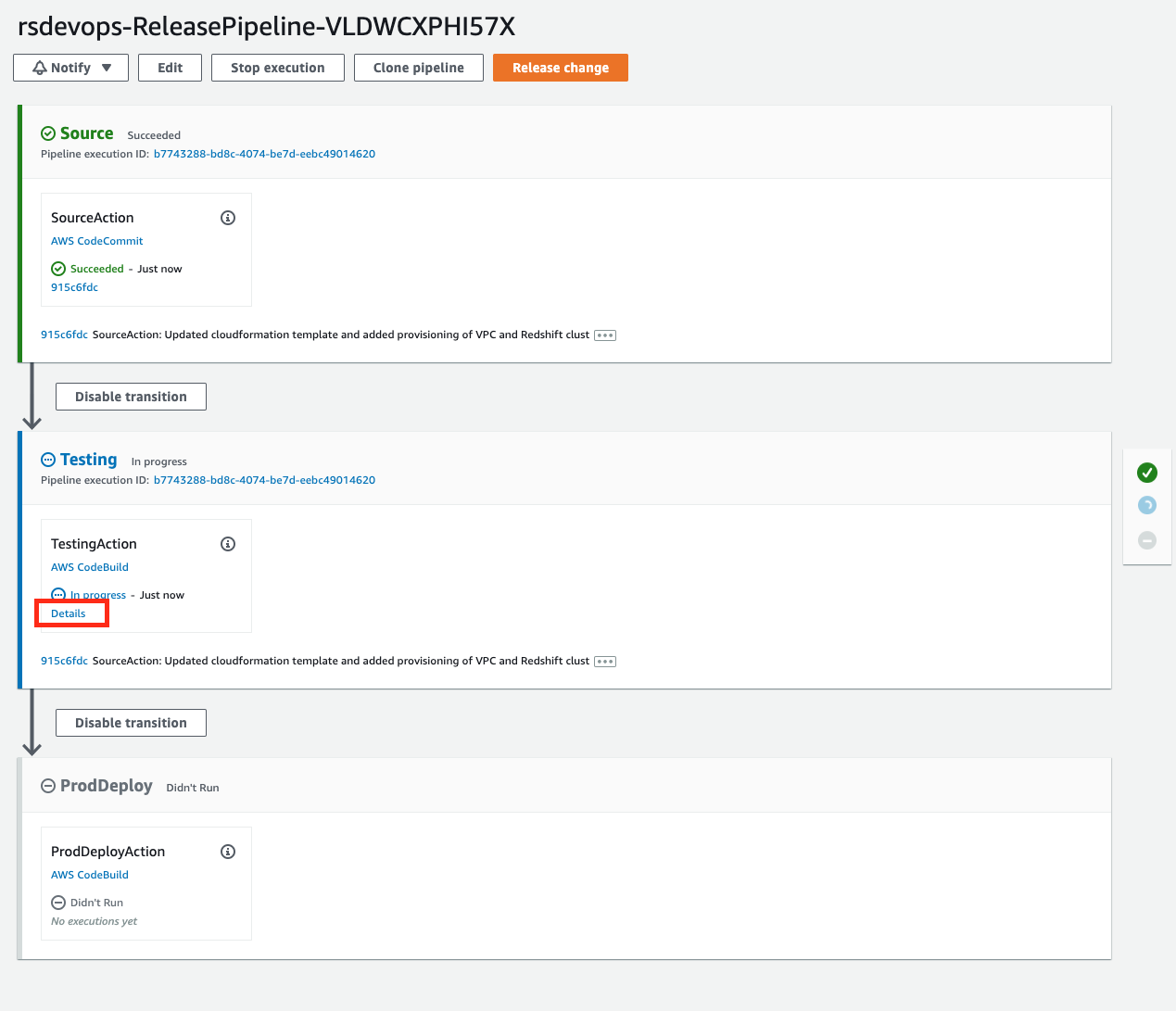 You’re redirected to the CodeBuild console, where you can see the run logs as well as the result of the test.

Although from a high-level perspective the test and prod environment look the same, there are some nuances with regards to how these environments are configured. Before diving deeper into the code, let’s look at the components first:

As referenced in the components, we also use some additional dependencies at the code level:

In the following sections, we dive deeper into how these dependencies are integrated.

For Maven, the configuration file is pom.xml. For an example, you can check out the pom file from our demo app. The pertinent part of the xml is the build section:

A versioned migration consists of the regular SQL script that is run and an optional undo SQL script to reverse the specific version. You have to create this undo script in order to enable the undo functionality for a specific version. For example, a regular SQL script consists of creating a new table, and the corresponding undo script consists of dropping that table. Flyway is responsible for keeping track of which version a database is currently at, and runs N number of migrations depending on how far back the target database is compared to the latest version. Versioned migrations are the most common use of Flyway and are primarily used to maintain table schema and keep reference or lookup tables up to date by running data loads or updates via SQL statements. Versioned migrations are applied in order exactly one time.

Repeatable migrations don’t have a version; instead they’re rerun every time their checksum changes. They’re useful for maintaining user-defined functions and stored procedures. Instead of having multiple files to track changes over time, we can just use a single file and Flyway keeps track of when to rerun the statement to keep the target database up to date.

By default, these migration files are located in the classpath under db/migration, the full path being src/main/resources/db/migration. For our example application, you can find the source code on GitHub.

When Flyway finishes running the migrations, the test cases are run. These test cases are under the folder src/test/java. You can find examples on GitHub that run a stored procedure via JDBC and validate the output or the impact.

Another aspect of unit testing to consider is how the test data is loaded and maintained in the test Amazon Redshift cluster. There are a couple of approaches to consider:

CodeBuild provides an environment where all of these dependencies run. As shown in our architecture diagram, we use CodeBuild for both test and prod. The differences are in the actual commands that run in each of those environments. These commands are stored in the buildspec.yml file. In our example, we provide a separate buildspec file for test and a different one for prod. During the creation of a CodeBuild project, we can specify which buildspec file to use.

There are a few differences between the test and prod CodeBuild project, which we discuss in the following sections.

For our example application, we define the secret as follows:

CodeBuild is integrated with Secrets Manager, so we define the following environment variables as part of the CodeBuild project:

To bring all these components together, we use CodePipeline to orchestrate the flow from the source code through prod deployment. CodePipeline also has additional capabilities. For example, you can add an approval step between test and prod so a release manager can review the results of the tests before releasing the changes to production.

You can use tests as a form of documentation of what is the expected behavior of a function. To further illustrate this point, let’s look at a simple stored procedure:

If you deployed the example app from the previous section, you can follow along by copying the stored procedure code and pasting it in src/main/resources/db/migration/R__MergeStagedProducts.sql. Save it and push the change to the CodeCommit repository by issuing the following commands (assuming that you’re at the top of the project folder):

After you push the changes to the CodeCommit repository, you can follow the progress of the build and test stages on the CodePipeline console.

We implement a basic Slowly Changing Dimension Type 2 approach in which we mark old data as CLOSED and append newer versions of the data. Although the stored procedure works as is, our test has the following expectations:

The stored procedure will pass the first test, but fail later tests. When we push this change to CodeCommit and the CI/CD process runs, we can see results like in the following screenshot. 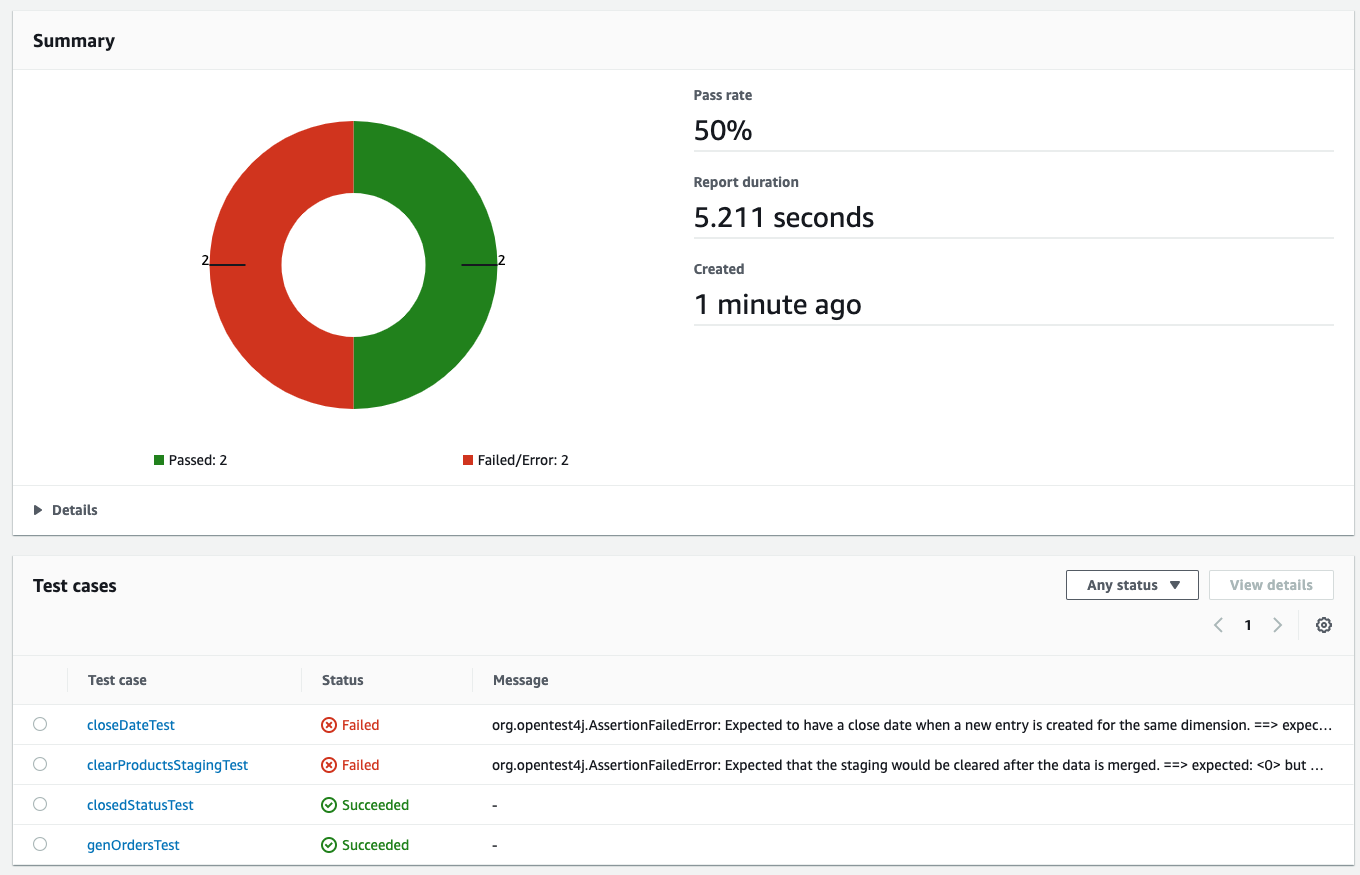 The tests show that the second and third tests failed. Failed tests result in the pipeline stopping, which means these bad changes don’t end up in production.

All the tests passed this time, which allows CodePipeline to proceed with deployment to production. 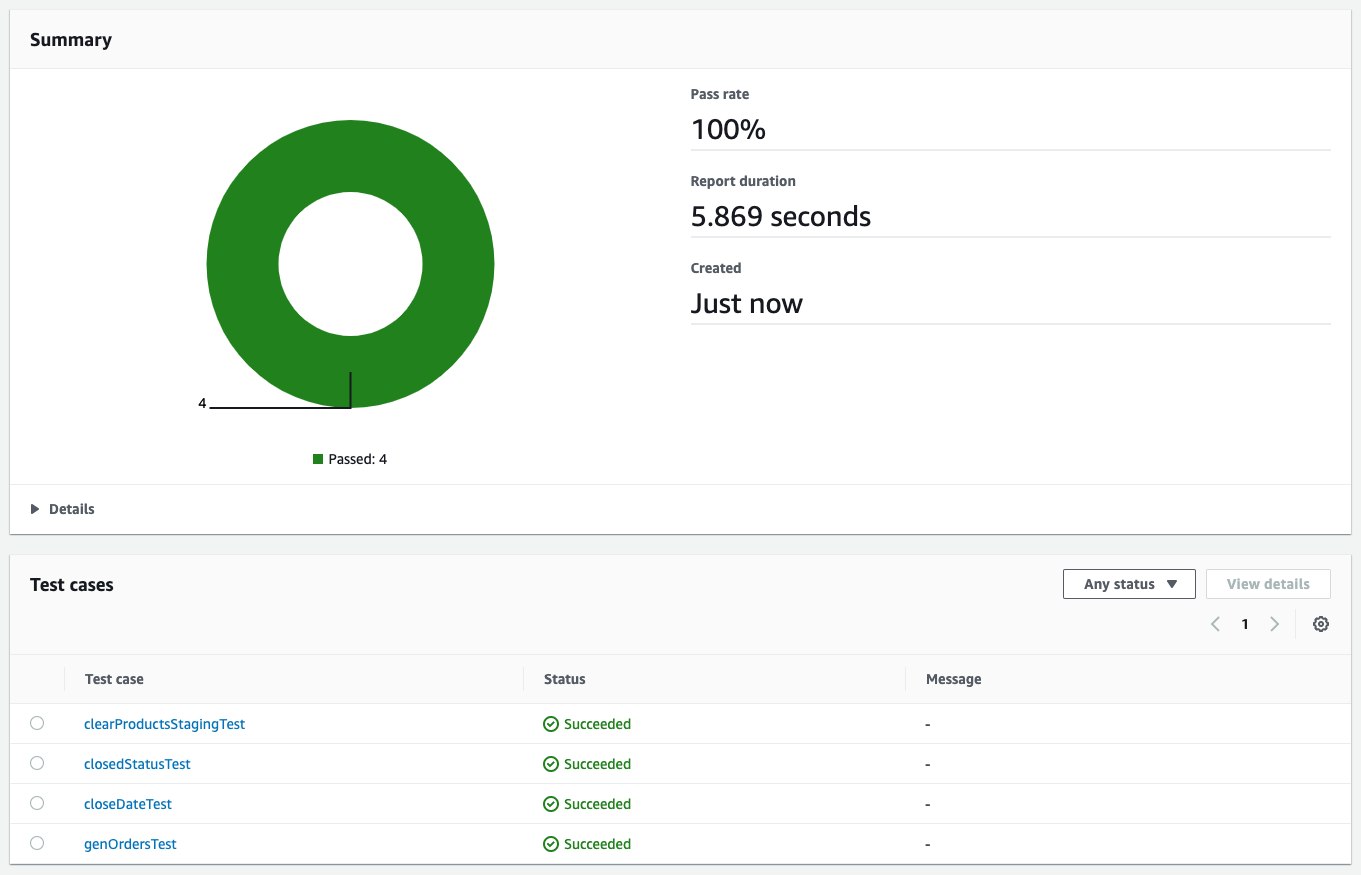 We used Flyway’s repeatable migrations to make the changes to the stored procedure. Code is stored in a single file and Flyway verifies the checksum of the file to detect any changes and reapplies the migration if the checksum is different from the one that’s already deployed.

After you’re done, it’s crucial to tear down the environment to avoid incurring additional charges beyond your testing. Before you delete the CloudFormation stack, go to the Resources tab of your stack and make sure the two buckets that were provisioned are empty. If they’re not empty, delete all the contents of the buckets.

Now that the buckets are empty, you can go back to the AWS CloudFormation console and delete the stack to complete the cleanup of all the provisioned resources.

Using CI/CD principles in the context of Amazon Redshift stored procedures and schema changes greatly improves confidence when updates are getting deployed to production environments. Similar to CI/CD in application development, proper test coverage of stored procedures is paramount to capturing potential regressions when changes are made. This includes testing both success paths as well as all possible failure modes.

In addition, versioning migrations enables consistency across multiple environments and prevents issues arising from schema changes that aren’t applied properly. This increases confidence when changes are being made and improves development velocity as teams spend more time developing functionality rather than hunting for issues due to environment inconsistencies.

We encourage you to try building a CI/CD pipeline for Amazon Redshift using these steps described in this blog.

Ashok Srirama is a Senior Solutions Architect at Amazon Web Services, based in Washington Crossing, PA. He specializes in serverless applications, containers, devops, and architecting distributed systems. When he’s not spending time with his family, he enjoys watching cricket, and driving his bimmer.

Indira Balakrishnan is a Senior Solutions Architect in the AWS Analytics Specialist SA Team. She is passionate about helping customers build cloud-based analytics solutions to solve their business problems using data-driven decisions. Outside of work, she volunteers at her kids’ activities and spends time with her family.

Vaibhav Agrawal is an Analytics Specialist Solutions Architect at AWS.Throughout his career, he has focused on helping customers design and build well-architected analytics and decision support platforms.

Rajesh Francis is a Sr. Analytics Customer Experience Specialist at AWS. He specializes in Amazon Redshift and works with customers to build scalable Analytic solutions.

Jeetesh Srivastva is a Sr. Manager, Specialist Solutions Architect at AWS. He specializes in Amazon Redshift and works with customers to implement scalable solutions using Amazon Redshift and other AWS Analytic services. He has worked to deliver on-premises and cloud-based analytic solutions for customers in banking and finance and hospitality industry verticals.