A key benefit of a data mesh architecture is allowing different lines of business (LOBs) and organizational units to operate independently and offer their data as a product. This model not only allows organizations to scale, but also gives the end-to-end ownership of maintaining the product to data producers that are the domain experts of the data. This ownership entails maintaining the data pipelines, debugging ETL scripts, fixing data quality issues, and keeping the catalog entries up to date as the dataset evolves over time.

On the consumer side, teams can search the central catalog for relevant data products and request access. Access to the data is done via the data sharing feature in AWS Lake Formation. As the amount of data products grow and potentially more sensitive information is stored in an organization’s data lake, it’s important that the process and mechanism to request and grant access to specific data products are done in a scalable and secure manner.

This post describes how to build a workflow engine that automates the data sharing process while including a separate approval mechanism for data products that are tagged as sensitive (for example, containing PII data). Both the workflow and approval mechanism are customizable and should be adapted to adhere to your company’s internal processes. In addition, we include an optional workflow UI to demonstrate how to integrate with the workflow engine. The UI is just one example of how the interaction works. In a typical large enterprise, you can also use ticketing systems to automatically trigger both the workflow and the approval process.

A typical data mesh architecture for analytics in AWS contains one central account that collates all the different data products from multiple producer accounts. Consumers can search the available data products in a single location. Sharing data products to consumers doesn’t actually make a separate copy, but instead just creates a pointer to the catalog item. This means any updates that producers make to their products are automatically reflected in the central account as well as in all the consumer accounts.

Building on top of this foundation, the solution contains several components, as depicted in the following diagram: 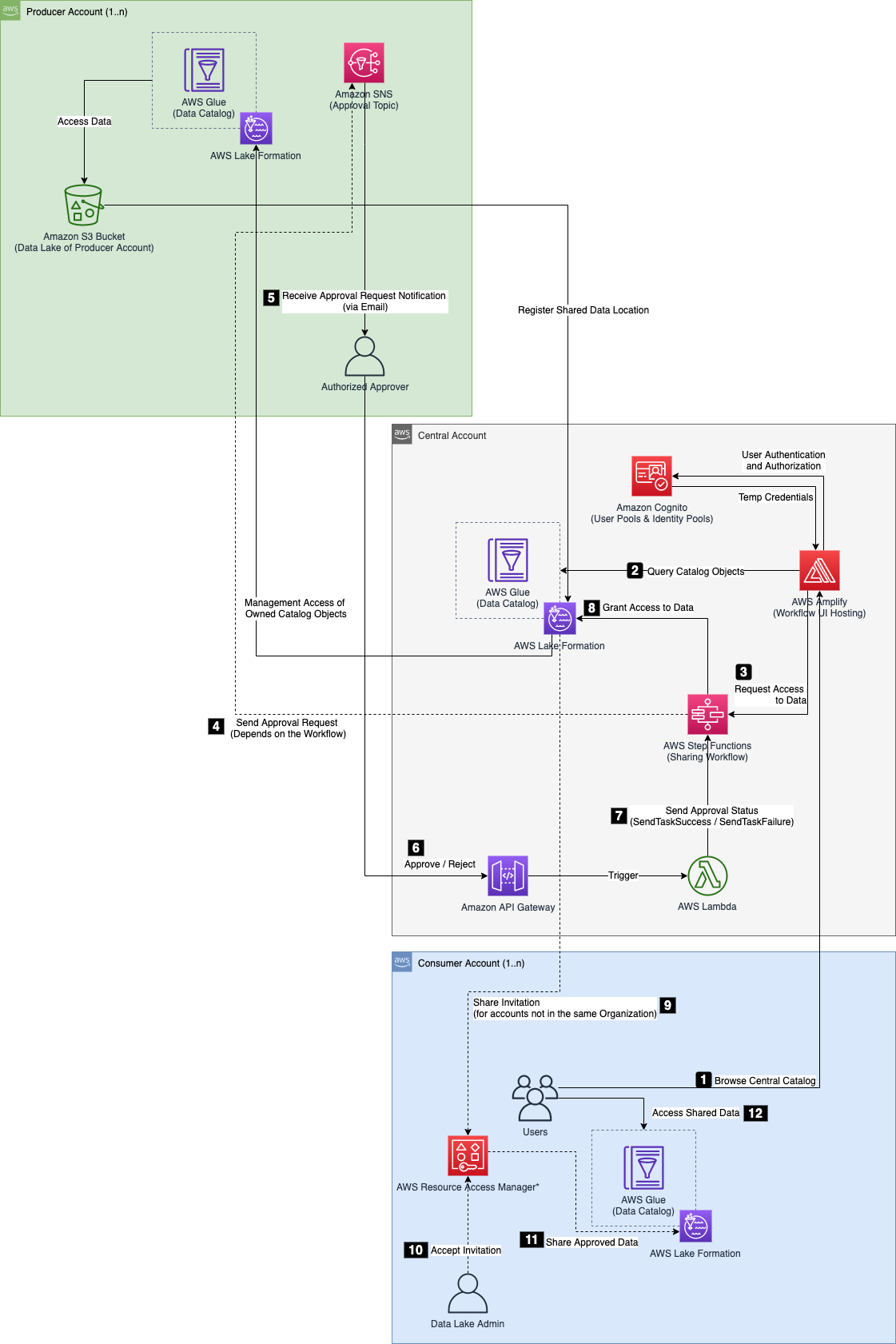 The solution is split into multiple steps:

The following diagram illustrates the workflow. In this particular example, the state machine checks if the table or database (depending on what is being shared) has the pii_flag parameter and if it’s set to TRUE. If both conditions are valid, it sends an approval request to the producer’s SNS topic. Otherwise, it automatically shares the product to the requesting consumer. 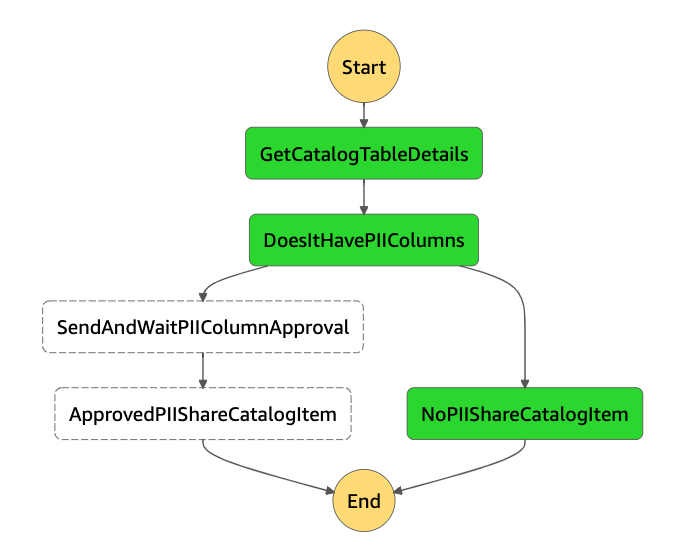 This workflow is the core of the solution, and can be customized to fit your organization’s approval process. In addition, you can add custom parameters to databases, tables, or even columns to attach extra metadata to support the workflow logic.

The following are the deployment requirements:

You can clone the workflow UI and AWS CDK scripts from the GitHub repository.

To deploy the backend for the central account, go to the root of the project after cloning the GitHub repository and enter the following code:

When the deployment is complete, it generates a JSON file in the src/cfn-output.json location. This file is used by the UI deployment script to generate a scoped-down IAM policy and workflow UI application to locate the state machine that was created by the AWS CDK script.

The actual AWS CDK scripts for the central account deployment are in infra/central/. This also includes the Lambda functions (in the infra/central/functions/ folder) that are used by both the state machine and the API Gateway.

The following table contains the minimum required permissions that the central account data lake administrator needs to grant to the respective IAM roles for the backend to have access to the AWS Glue Data Catalog.

The workflow uses the following catalog parameters to provide its functionality.

You can use UpdateDatabase and UpdateTable to add parameters to database and column-level granularity, respectively. Alternatively, you can use the CLI for AWS Glue to add the relevant parameters.

Use the AWS CLI to run the following command to check the current parameters in your database:

You get the following response:

Run the following command to update the Data Catalog:

To deploy the backend for your producer accounts, go to the root of the project and run the following command:

You can run this deployment script multiple times, each time pointing to a different producer account that you want to participate in the workflow.

To receive notification emails, subscribe your email in the SNS topic that the deployment script created. For example, our topic is called DataLakeSharingApproval. To get the full ARN, you can either go to the Amazon Simple Notification Service console or run the following command to list all the topics and get the ARN for DataLakeSharingApproval:

After you have the ARN, you can subscribe your email by running the following command:

You then receive a confirmation email via the email address that you subscribed. Choose Confirm subscription to receive notifications from this SNS topic.

The workflow UI is designed to be deployed in the central account where the central data catalog is located.

To start the deployment, enter the following command:

The deployment command prompts you for the following information:

The script gives a summary of what is deployed. Entering Y triggers the resources to be deployed in the backend. The prompt looks similar to the following screenshot:

When the deployment is complete, the remaining prompt is for the initial user information such as user name and email. A temporary password is automatically generated and sent to the email provided. The user is required to change the password after the first login.

The deployment script grants IAM permissions to the user via an inline policy attached to the Amazon Cognito authenticated IAM role:

The last remaining step is to grant Lake Formation permissions (DESCRIBE for both databases and tables) to the authenticated IAM role associated with the Amazon Cognito identity pool. You can find the IAM role by running the following command:

The IAM role name is in the AuthRoleName property under the awscloudformation key. After you grant the required permissions, you can use the URL provided in your browser to open the workflow UI.

Your temporary password is emailed to you so you can complete the initial login, after which you’re asked to change your password. 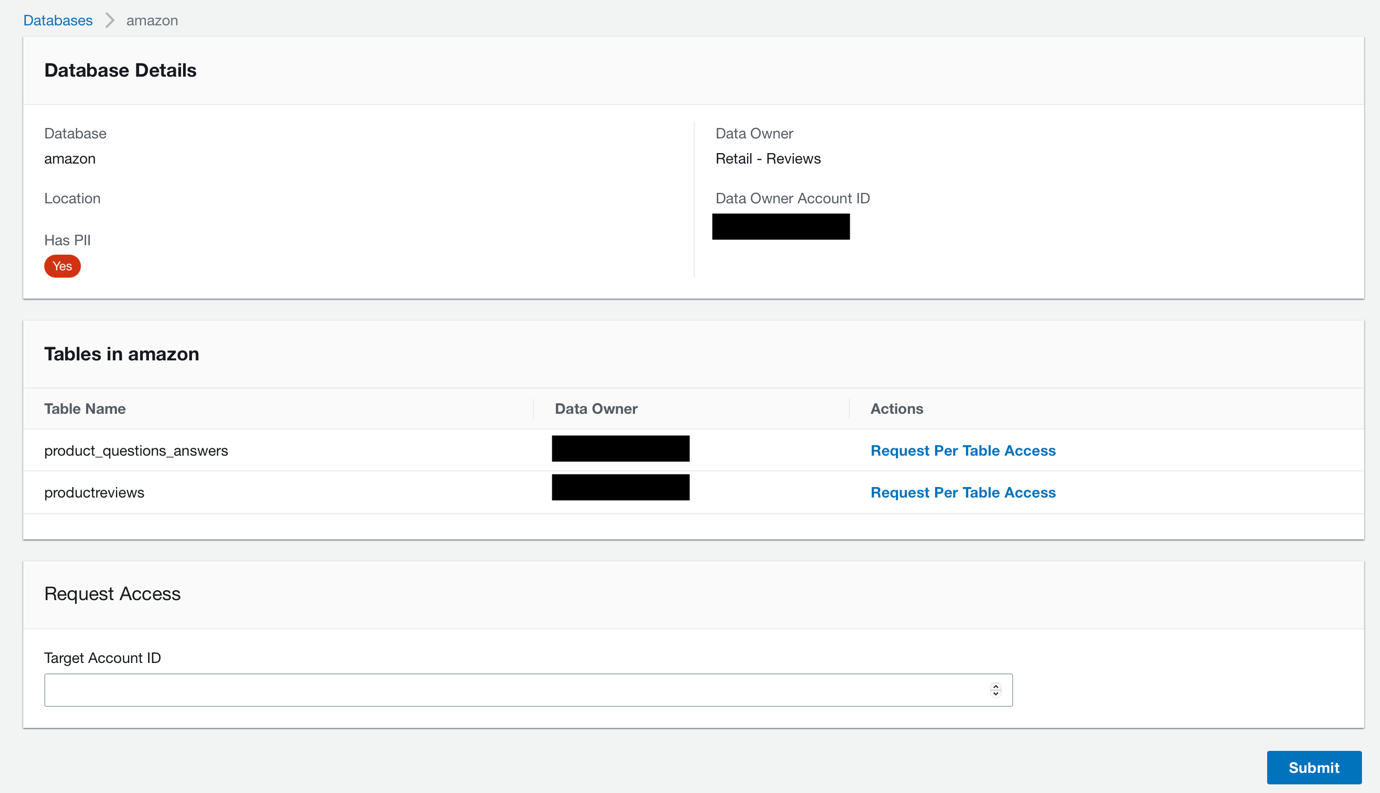 Choose Request Per Table Access and see more details at the table level. 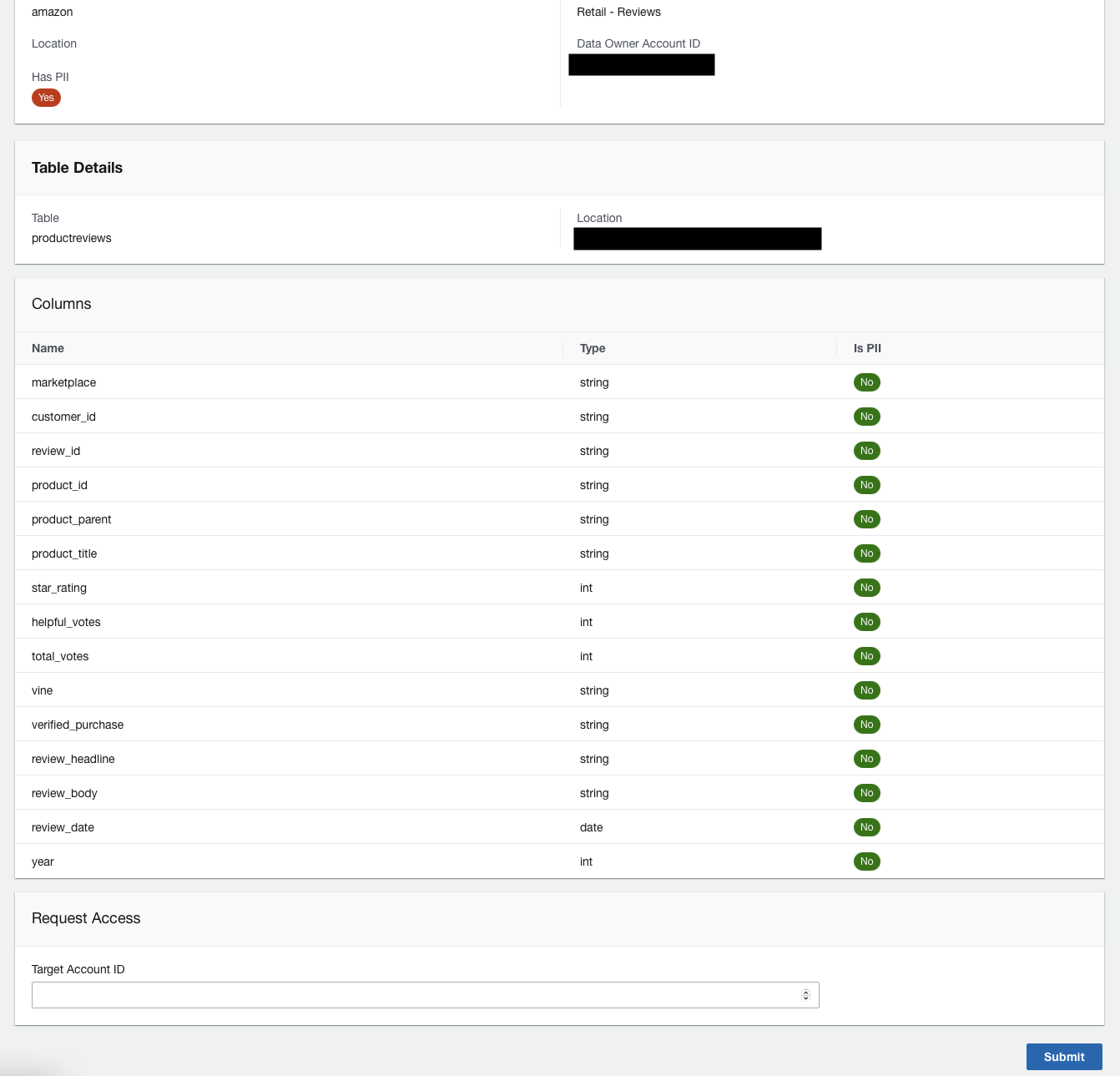 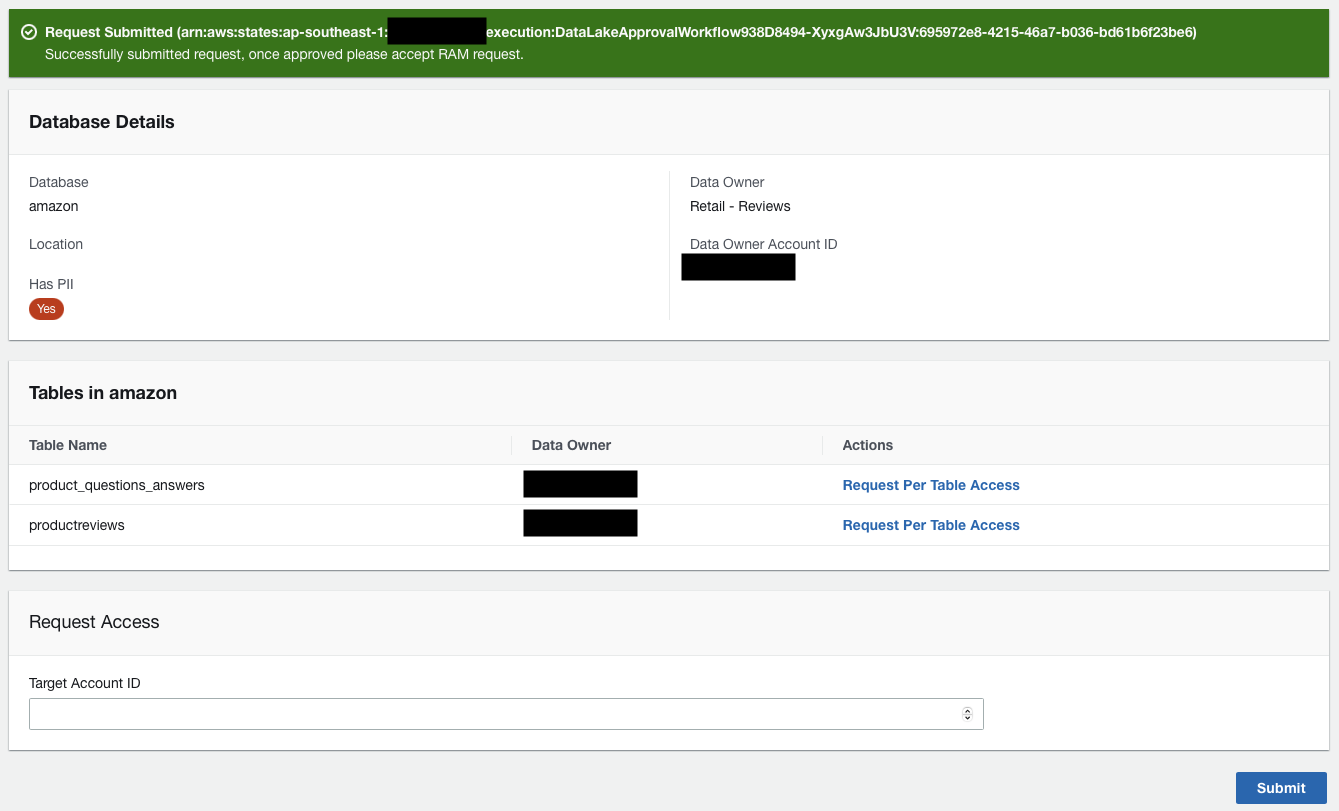 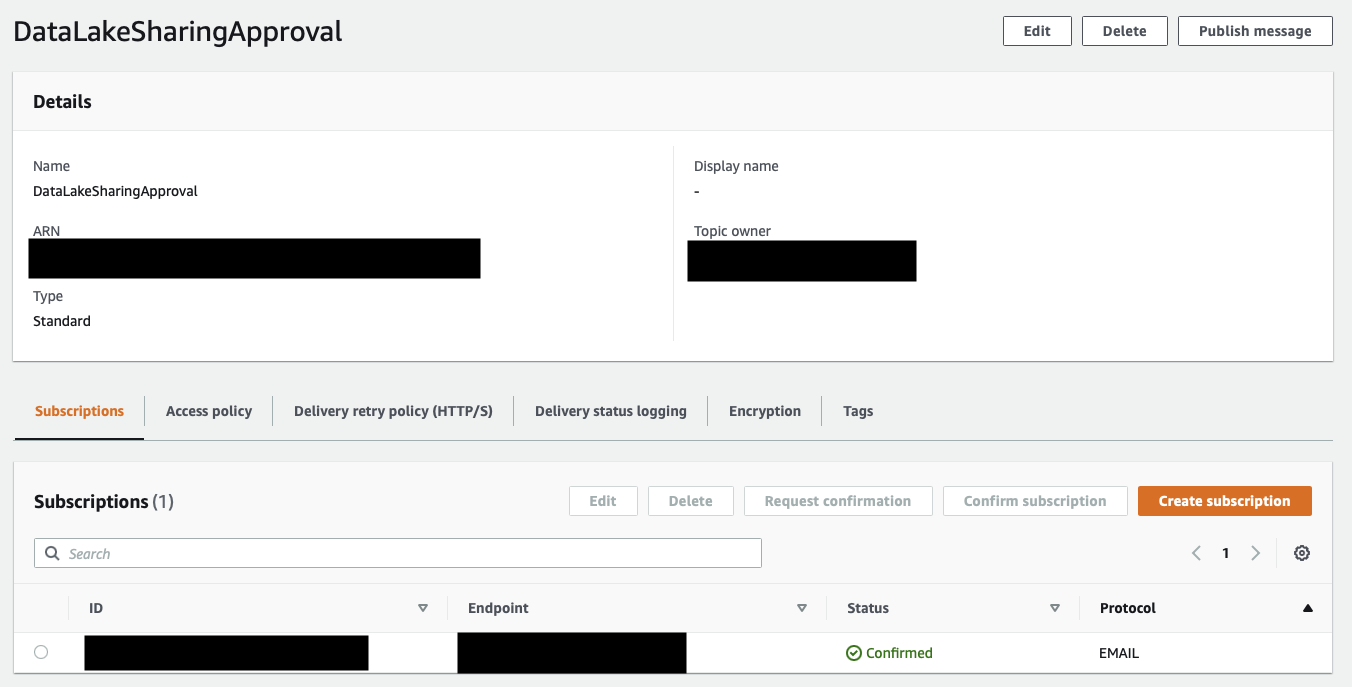 The email looks similar to the following screenshot:

The product owner chooses the Approve link to trigger the Step Functions state machine to continue running and share the catalog item to the consumer account.

After the resource share is accepted, the shared database appears in the consumer account’s catalog.

If you no longer need to use this solution, use the provided cleanup scripts to remove the deployed resources.

Run the following command to remove the workflow backend in the central account:

This command doesn’t require the profile parameter because it uses the existing Amplify configuration to infer where the resources are deployed and which profile was used.

Lastly, a high degree of customization is possible with the demonstrated approach. Organizations have complete control over the workflow, how data product sensitivity levels are defined, what gets auto-approved and what needs further approvals, the hierarchy of approvals (such as a single approver or multiple approvers), and how the approvals get delivered and acted upon. You can take advantage of this flexibility to automate your company’s processes to help them safely accelerate towards being a data-driven organization.