Amazon Athena now supports user-defined functions (in Preview), a feature that enables you to write custom scalar functions and invoke them in SQL queries. Although Athena provides built-in functions, UDFs enable you to perform custom processing such as compressing and decompressing data, redacting sensitive data, or applying customized decryption. You can write your UDFs in Java using the Athena Query Federation SDK. When a UDF is used in a SQL query submitted to Athena, it’s invoked and run on AWS Lambda. You can use UDFs in both SELECT and FILTER clauses of a SQL query, and invoke multiple UDFs in the same query. Athena UDF functionality is available in Preview mode in the US East (N. Virginia) Region.

This blog post covers basic functionalities of Athena UDF, writing your own UDF, building and publishing your UDF to AWS Serverless Application Repository, configuring the UDF connector application, and using the UDF in Athena queries. You can implement use cases involving sensitive data, such as personal identifiable information (PII), credit cards, or Social Security numbers (SSN). In this post, we deploy a Redact UDF and use that to mask sensitive information.

Before creating your development environment, you must have the following prerequisites:

The AWS Cloud9 IDE comes with a default 10 GB disk space, which can fill quickly when setting up the development environment, so you should resize it.

Setting up the IDE

Next, you clone the SDK and prepare your IDE.

If you’re working on a development machine that already has Apache Maven, the AWS CLI, and the AWS Serverless Application Model build tool installed, you can skip this step.

Adding the UDF code and publishing the connector

In this section, you add your UDF function, build the JAR file, and deploy the connector. 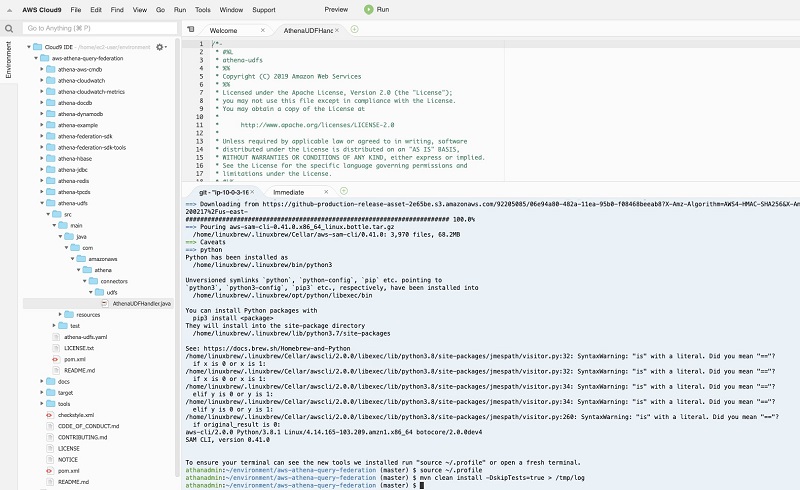 Now we add the UDF code for a String Redact function, which redacts a string to show only the last four characters. You can use this UDF function to mask sensitive information.

You can also copy the modified code with the following command (which must be run from the aws-athena-query-federation directory):

After copying the file, you can open it in the AWS Cloud9 IDE to see its contents. 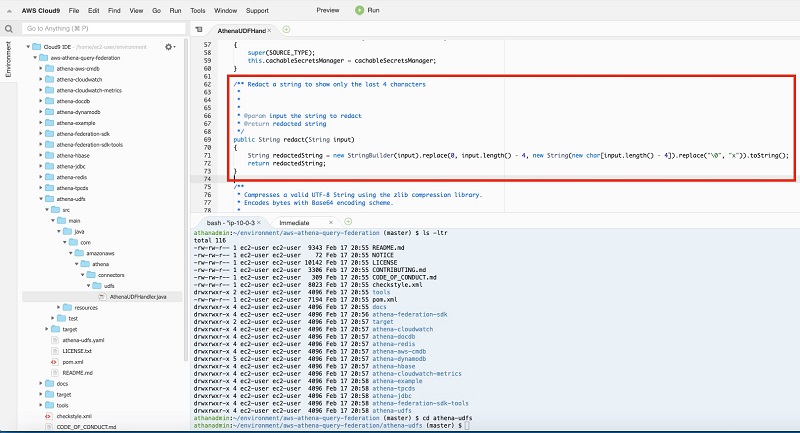 After it successfully builds, a JAR file is created in the target folder of your project named artifactId-version.jar, where artifactId is the name you provided in the Maven project, for example, athena-udfs.

This allows users with relevant permission levels to deploy instances of the connector via a one-click form.

When the connector is published successfully, it looks like the following screenshot.

To see AthenaUserDefinedFunctions, choose the link shown in the terminal after the publish is successful or navigate to the AWS Serverless Application Repository by choosing Available Applications, Private applications.

Setting up the UDF connector

Querying with UDF in Athena

Now that the UDF connector code is deployed, we can run Athena queries that use the UDF.

You can now run a query to use the Redact UDF to mask sensitive information from PII columns. To show the comparison, we have included the PII column and masked data as part of the query results. If you ran the CloudFormation template from Part 1 of this series, you can navigate to the Saved Queries on the Athena console and choose RedactUdfCustomerAddress.

The following screenshot shows your query.

After the query runs, you should see results like the following screenshot. The redact_name, redact_phone, and redact_address columns only show the last four characters.

To clean up the resources created as part of your CloudFormation template, complete the following steps:

In this post, you learned about Athena user-defined functions, how to create your own UDF, and how to deploy it to a private AWS Serverless Application Repository. You also learned how to configure the UDF and use it in your Athena queries. In the next post of this series, we discuss and demonstrate how to use a machine learning (ML) anomaly detection model developed on Amazon SageMaker and use that model in Athena queries to invoke an ML inference function to detect anomaly values in our orders dataset.

Amir Basirat is a Big Data specialist solutions architect at Amazon Web Services, focused on Amazon EMR, Amazon Athena, AWS Glue and AWS Lake Formation, where he helps customers craft distributed analytics applications on the AWS platform. Prior to his AWS Cloud journey, he worked as a Big Data specialist for different technology companies. He also has a PhD in computer science, where his research was primarily focused on large-scale distributed computing and neural networks.