Our customers use Apache Hive on Amazon EMR for large-scale data analytics and extract, transform, and load (ETL) jobs. Amazon EMR Hive uses Apache Tez as the default job execution engine, which creates Directed Acyclic Graphs (DAGs) to process data. Each DAG can contain multiple vertices from which tasks are created to run the application in parallel. Their final output is written to Amazon Simple Storage Service (Amazon S3).

Hive initially writes data to staging directories and then move it to the final location after a series of rename operations. This design of Hive renames supports task failure recovery, such as rescheduling the failed task with another attempt, running speculative execution, and recovering from a failed job attempt. These move and rename operations don’t have a significant performance impact in HDFS because it’s only a metadata operation when compared to Amazon S3 where the performance can degrade significantly based on the number of files written.

This post discusses the new optimized committer for Hive in Amazon EMR and also highlights its impressive performance by running a TPCx-BB performance benchmark and comparing it with the Hive default commit logic.

By default, Apache Hive manages the task and job commit phase and doesn’t have support for pluggable Hadoop output committers, which you can use to customize Hive’s file commit behavior.

In its current state, the rename operation with Hive-managed and external tables happens in three places:

The impact of these rename operations is more significant on Hive jobs writing a large number of files.

To mitigate the slowdown in write performance due to renames, we added support for output committers in Hive. We developed a new output committer, the Hive EMRFS S3-optimized committer, to avoid Hive rename operations. This committer directly writes the data to the output location, and the file commit happens only at the end of the job to ensure that it is resilient to job failures.

We ran the TPCx-BB Express Benchmark tests with and without the new committer and evaluated the write performance improvement.

The following graph shows performance improvement measured as total runtime of the queries. With the new committer, the runtime is better(lower). 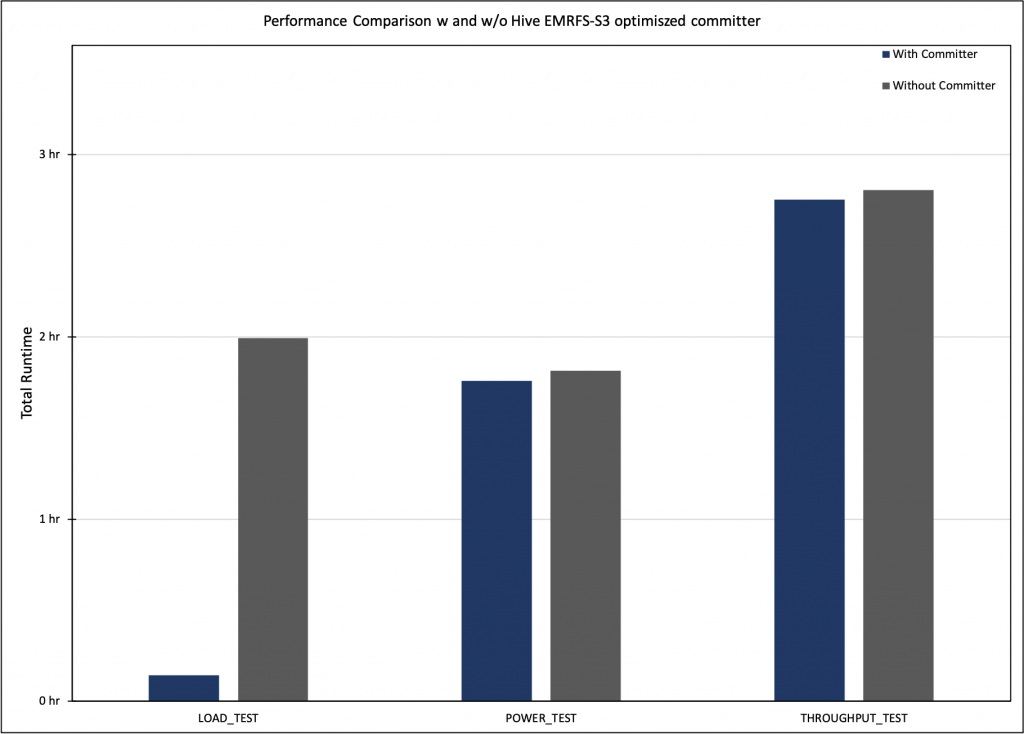 This optimization is for Hive writes and hence the majority of improvement occurred in the load test, which is the writing phase of the benchmark. We observed an approximate 15-times reduction in runtime. However, we didn’t see much improvement in the power test and throughput test because each query is just writing a single file to the final table.

The benchmark used in this post is derived from the industry-standard TPCx-BB benchmark, and has the following characteristics:

Note that this is derived from the TPCx-BB benchmark, and as such is not comparable to published TPCx-BB results, as the results of our tests do not comply with the specification.

To benchmark the performance impact with variable data sizes and number of files, we also evaluated the following INSERT OVERWRITE query over the store_sales table from the TPC-DS dataset with additional variations, such as size of data (1 GB, 5 GB, 10 GB, 25 GB, 50 GB, 100 GB), number of files, and number of partitions:

The results show that the number of files written is the critical factor for performance improvement when using this new committer in comparison to the default Hive commit logic. 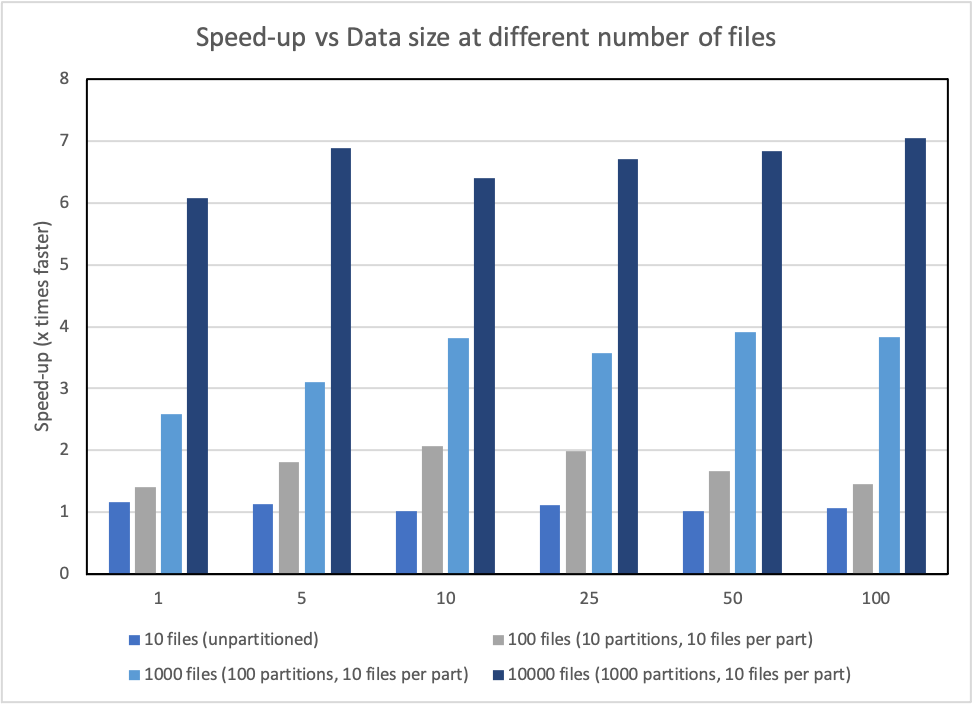 To enable Amazon EMR Hive to use HiveEMRFSOptimizedCommitter to commit data as the default for all Hive-managed and external tables, use the following hive-site configuration starting with EMR 6.5.0 or EMR 5.34.0 clusters:

The new committer is not compatible with the hive.exec.parallel=true setting. Be sure to not enable both settings at the same time in Amazon EMR 6.5.0. In future EMR releases, parallel execution will automatically be disabled when the new Hive committer is used.

This committer will not be used and default Hive commit logic will be applied in the following scenarios:

Suthan Phillips works with customers to provide them architectural guidance and helps them achieve performance enhancements for complex applications on Amazon EMR. In his spare time, he enjoys hiking and exploring the Pacific Northwest.

Aditya Shah is a Software Development Engineer at AWS. He is interested in Databases and Data warehouse engines and has worked on distributed filesystem, ACID compliance and metadata management of Apache Hive. When not thinking about data, he is browsing pages of internet to sate his appetite for random trivia and is a movie geek at heart.

Syed Shameerur Rahman is a software development engineer at Amazon EMR. He is interested in highly scalable, distributed computing. He is an active contributor of open source projects like Apache Hive, Apache Tez, Apache ORC and has contributed important features and optimizations. During his free time, he enjoys exploring new places and food.