Building a serverless application changes the way developers think about testing their code. Previously, developers would emulate the complete infrastructure locally and only commit code ready for testing. However, with serverless, local emulation can be more complex.

The AWS SAM team has listened to developers wanting a better way to emulate the cloud on their local machine and we believe that testing against the cloud is the best path forward. With that in mind, I am happy to announce the beta release of AWS SAM Accelerate!

Previously, the latency of deploying after each change has caused developers to seek other options. AWS SAM Accelerate is a set of features to reduce that latency and enable developers to test their code quickly against production AWS services in the cloud.

To demonstrate the different options, this post uses an example application called “Blog”. To follow along, create your version of the application by downloading the demo project. Note, you need the latest version of AWS SAM and Python 3.9 installed. AWS SAM Accelerate works with other runtimes, but this example uses Python 3.9.

After installing the pre-requisites, set up the demo project with the following commands:

AWS SAM downloads the sample project into the current folder. With the blog application in place, you can now try out AWS SAM Accelerate.

The first feature of AWS SAM Accelerate is a new command called sam sync. This command synchronizes your project declared in an AWS SAM template to the AWS Cloud. However, sam sync differentiates between code and configuration.

The sam sync command with no options deploys or updates all infrastructure and code like the sam deploy command. However, unlike sam deploy, sam sync bypasses the AWS CloudFormation changeset process. To see this, run: 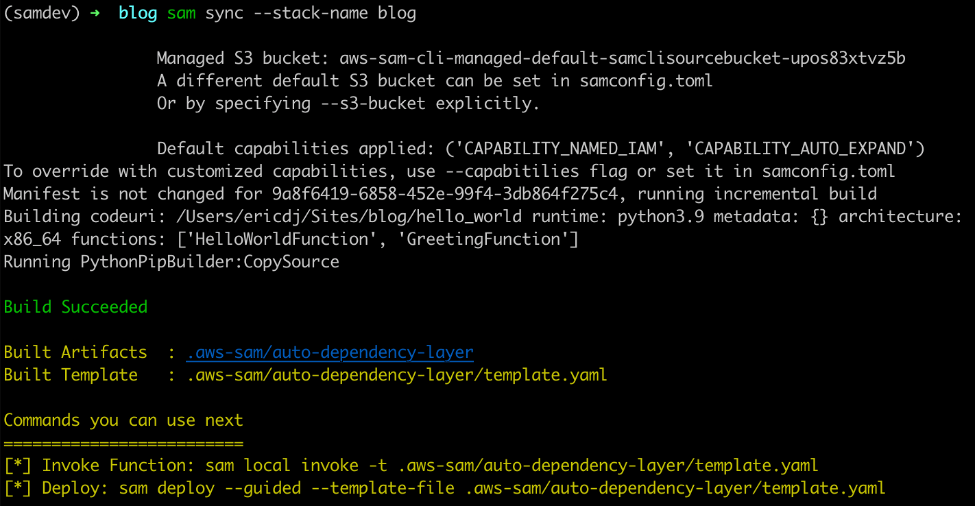 AWS SAM sync with no options

First, sam sync builds the code using the sam build command and then the application is synchronized to the cloud.

The sam sync command can also synchronize code changes to the cloud without updating the infrastructure. This code synchronization uses the service APIs and bypasses CloudFormation, allowing AWS SAM to update the code in seconds instead of minutes.

To synchronize code, use the --code flag, which instructs AWS SAM to sync all the code resources in the stack: 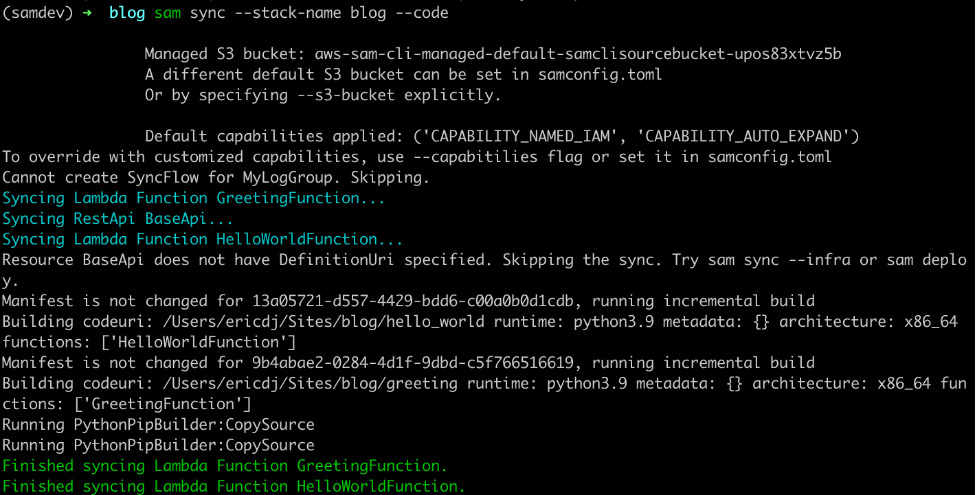 The sam sync command verifies each of the code types present and synchronizes the sources to the cloud. This example uses an API Gateway REST API and two Lambda functions. AWS SAM skips the REST API because there is no external OpenAPI file for this project. However, the Lambda functions and their dependencies are synchronized.

You can limit the synchronized resources by using the --resource flag with the --code flag:

You can target one specific resource with the --resource-id flag to get more granular:

This time sam sync ignores the GreetingFunction and only updates the HelloWorldFunction declared with the command’s --resource-id flag.

The first time you run the sam sync command with the --watch flag, AWS SAM ensures that the latest code and infrastructure are in the cloud. It then monitors for file changes until you quit the command:

To see a change, modify the code in the HelloWorldFunction (hello_world/app.py) by updating the response to the following:

Once you save the file, sam sync detects the change and syncs the code for the HelloWorldFunction to the cloud.

During the initial sync, there is a logical resource name called AwsSamAutoDependencyLayerNestedStack. This feature helps to synchronize code more efficiently.

During the first synchronization, sam sync creates a single nested stack that maintains a Lambda layer for each Lambda function in the stack.

These layers are only updated when the dependencies for one of the Lambda functions are updated. To demonstrate, change the requirements.txt (greeting/requirements.txt) file for the GreetingFunction to the following:

AWS SAM detects the change, and the GreetingFunction and its temporary layer are updated:

The Lambda function changes because the Lambda layer version must be updated.

The second feature of AWS SAM Accelerate is an update to the SAM build command. This change separates the cache for dependencies from the cache for the code. The build command now evaluates these separately and only builds artifacts that have changed.

To try this out, build the project with the cached flag:

The first build recognizes that there is no cache and downloads the dependencies and builds the code. However, when you rerun the command:

The sam build command verifies that the dependencies have not changed. There is no need to download them again so it builds only the application code.

Finally, update the requirements file for the HelloWorldFunction (hello_w0rld/requirements.txt) to:

The sam build command detects a change in the dependency requirements and rebuilds the dependencies and the code.

The final part of AWS SAM Accelerate’s beta feature set is aggregating logs for developer feedback. This feature is an enhancement to the already existing sam logs command. In addition to pulling Amazon CloudWatch Logs or the Lambda function, it is now possible to retrieve logs for API Gateway and traces from AWS X-Ray.

To test this, start the sam logs:

Invoke the HelloWorldApi endpoint returned in the outputs on syncing: 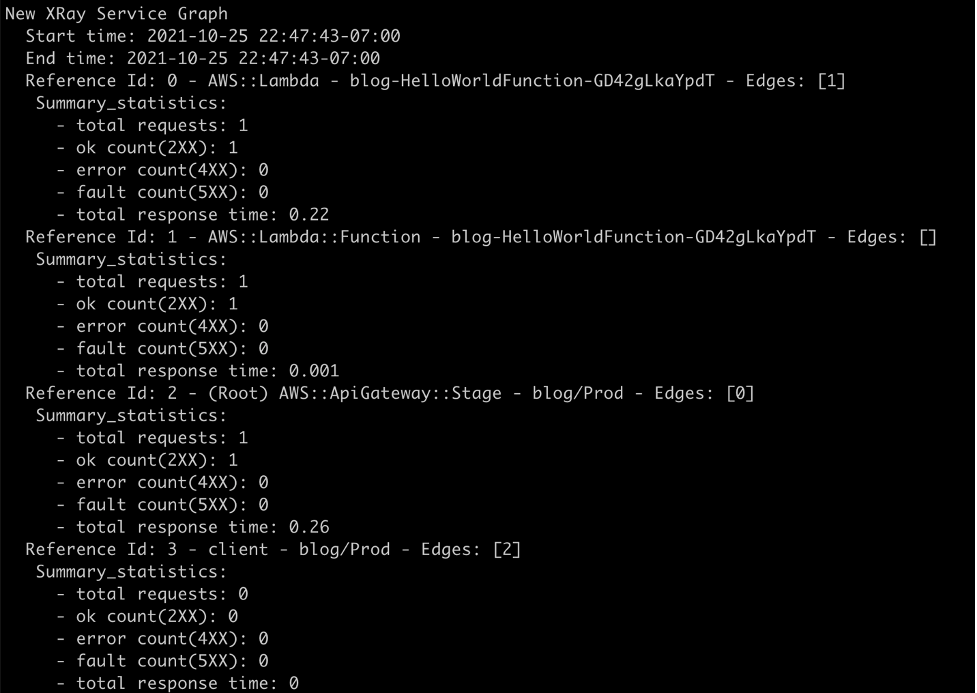 With AWS SAM Accelerate, creating and testing an application is easier and faster. To get started:

AWS SAM Accelerate is in beta as of today. The team has worked hard to implement a solid minimum viable product (MVP) to get feedback from our community. However, there are a few caveats.

If you no longer need the AWS resources that you created by running this example, you can remove them by deleting the AWS CloudFormation stack that you deployed.

To delete the AWS CloudFormation stack, use the sam delete command:

When testing serverless applications, developers must get to the cloud as soon as possible. AWS SAM Accelerate helps developers escape from emulating the cloud locally and move to the fidelity of testing in the cloud.

In this post, I walk through the philosophy of why the AWS SAM team built AWS SAM Accelerate. I provide an example application and demonstrate the different features designed to remove barriers from testing in the cloud.

We invite the serverless community to help improve AWS SAM for building serverless applications. As with AWS SAM and the AWS SAM CLI (which includes AWS SAM Accelerate), this project is open source and you can contribute to the repository.