In Part 1 of this series, I described how to protect your API provided by API Gateway using AWS WAF.

In Part 2 of this series, I described how to use API keys as a shared secret between a CloudFront distribution and API Gateway to secure public access to your API in API Gateway. This new AWS WAF integration means that the method described in Part 2 is no longer necessary.

The following image describes methods to secure your API in API Gateway before and after this feature was made available.

For this walkthrough, you can use an existing Pet Store API or any API in API Gateway that you may already have deployed. You create a new AWS WAF web ACL that is later associated with your API Gateway stage. 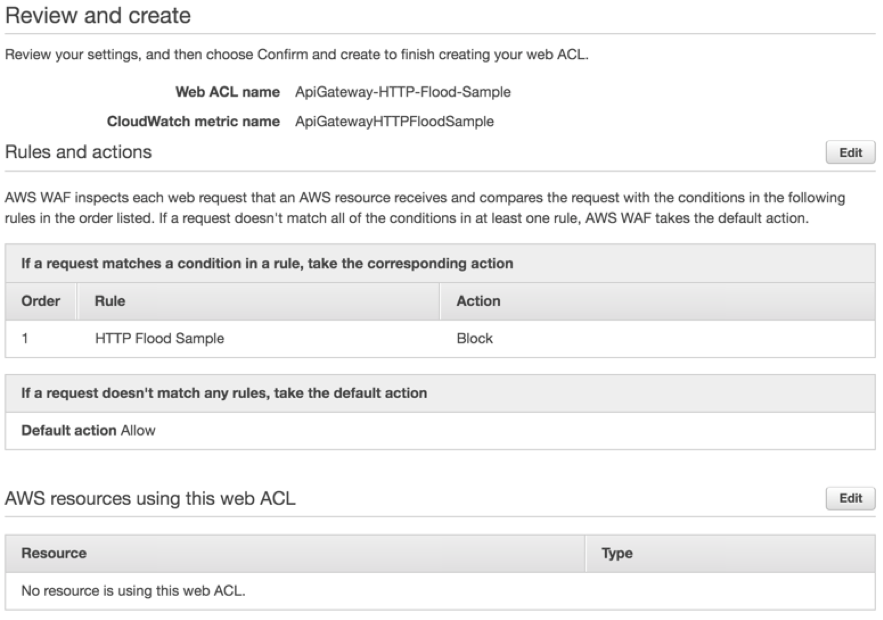 You can now follow the steps to enable the AWS WAF web ACL for an existing API in API Gateway:

AWS WAF provides HTTP flood protection that is a rate-based rule. The rate-based rule is automatically triggered when web requests from a client exceed a configurable threshold. The threshold is defined by the maximum number of incoming requests allowed from a single IP address within a five-minute period.

After this threshold is breached, additional requests from the IP address are blocked until the request rate falls below the threshold. For this example, you defined 2000 requests as a threshold for the HTTP flood rate–based rule.

Artillery, an open source modern load testing toolkit, is used to send a large number of requests directly to the API Gateway Invoke URL to test whether your AWS WAF native integration is working correctly.

Firstly, follow these steps to retrieve the correct Invoke URL of your Pet Store API:

Secondly, use cURL to query your distribution and see the API output before the rate limit rule is triggered:

Then, use Artillery to send a large number of requests in a short period of time to trigger your rate limit rule:

With this command, Artillery sends 2000 requests to your PetStore API from 10 concurrent users. By doing so, you trigger the rate limit rule in less than the 5-minute threshold. For brevity, I am not posting the Artillery output here.

After Artillery finishes its execution, try re-running the cURL command. You should no longer see a list of pets:

As you can see from the output, the request was blocked by AWS WAF. Your IP address is removed from the blocked list after it falls below the request limit rate.

I hope that you found the information in this post helpful. Remember that you can use this integration today with all Amazon API Gateway endpoints (Edge, Regional, and Private). It is available in the following Regions: