Today, there are many enterprise customers who are keen on migrating their mission critical Enterprise Resource Planning (ERP) applications from on-premises to the AWS Cloud. Some of these applications are Oracle E-Business Suite (Oracle EBS) or SAP running on IBM Power Systems. The enterprise customers realize that running critical ERP applications on AWS enables businesses to be more agile, cost effective, and secure than on-premises. AWS provides cloud native services that streamline your ability to adopt emerging technologies, which enable greater innovation, and faster time-to-value.

However, it is essential to note that both IBM Power Systems and Amazon Elastic Cloud Compute (EC2) are using different CPU processor architectures. Amazon EC2 instances run on either x86 or ARM-based processors, while the IBM Power Systems runs on IBM Power processors. As a result, there are no direct performance or sizing benchmarks mapping the two platforms.

The purpose of this blog is to share a method and an example of how to estimate the sizing of mission critical applications running on IBM Power Systems to Amazon EC2.

AWS refers SAP Application Performance Standard (SAPS) to normalize the CPU performance between IBM Power Systems and Intel x86 processors. SAPS is a hardware-independent unit of measurement that describes the performance of a system configuration in the SAP environment. It is derived from the Sales and Distribution (SD) two-tier benchmark. The SD benchmark defines 100 SAPS as 2,000 fully business processed order line items per hour.

This throughput is achieved by processing 6,000 dialog steps (screen changes), 2,000 postings per hour in the SD Benchmark, or 2,400 SAP transactions.

In this method, I compare the performance sizing by using SAPS, which is not released by other ERP software such as Oracle EBS. However, I believe that this method for an indirect performance benchmark is most relevant for an ERP software perspective. This is because most of the enterprise businesses have similar ordering processes.

I walk you through a real example that demonstrates how you can translate and migrate an SAP ERP 6.0 or Oracle EBS application database to the AWS Cloud. The on-premises database runs on IBM Power 795 (IBM P795) with IBM AIX, and migrates to AWS by choosing the best size of Amazon EC2 instances.

You can use IBM nmon Analyzer, which is a free tool to produce AIX performance analysis reports running on IBM Power Systems. The tool works with the latest version of nmon, and is also tested with older versions for backwards compatibility. The tool is updated whenever nmon is updated, and at irregular intervals for new functions. It allows users to: 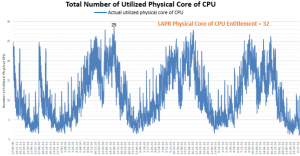 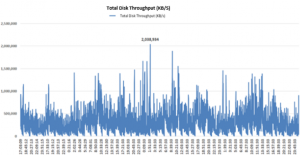 You can find the SAPS results for different hardware manufacturers from this link. Table 1 shows how to calculate the processing power for single CPU core with respect to different hardware manufacturers. I chose Amazon EC2 instances r5.metal and r4.16xlarge as potential candidates because they provide memory sizing. Memory sizing best fits the current demand of 408 GB – refer to Figure 2.

I apply Equation 1 to calculate the Normalization Factor for any targeted Amazon EC2 instance with respect to the source system of IBM Power systems.

By inserting the SAPS/Core calculated from Table 1 into Equation (1), I got the following results:

Figure 1 indicates that 29 cores of physical CPU is needed to meet the total processing power of database ERP, running on IBM P795. This can be compared to assigned entitlement capacity of 32. So, the Amazon EC2 instance, r5.metal, delivers sufficient processing power with enough buffer for future business growth in next 12–24 months.

Next, I must check and ensure that other specifications such as network I/O, disk throughput, and disk I/O meet the current peak demand of the application. Table 3 shows the different specifications of r5.metal. It is clear from Table 3 that r5.metal meets all the demand requirements of the database ERP.

The example discussed in this blog is a best practice for comparing performance from on-premises to the AWS Cloud. The method demonstrates how to select the right type and size of Amazon EC2 instances for migrating from IBM Power Systems, running a mission critical ERP application, to the AWS Cloud. This method has been applied to many enterprise cloud transformation projects, and has delivered more predictable performance with significant TCO savings. Additionally, this method can be adopted for capacity planning, and helps enterprises establish business justifications for hybrid platform migration.