Constantin Gonzalez is a Principal Solutions Architect at AWS

In my free time, I run a small blog that uses Amazon S3 to host static content and Amazon CloudFront to distribute it world-wide. I use a home-grown, static website generator to create and upload my blog content onto S3.

My blog uses two S3 buckets: one for staging and testing, and one for production. As a website owner, I want to update the production bucket with all changes from the staging bucket in a reliable and efficient way, without having to create and populate a new bucket from scratch. Therefore, to synchronize files between these two buckets, I use AWS Lambda and AWS Step Functions.

In this post, I show how you can use Step Functions to build a scalable synchronization engine for S3 buckets and learn some common patterns for designing Step Functions state machines while you do so.

Step Functions makes it easy to coordinate the components of distributed applications and microservices using visual workflows. Building applications from individual components that each perform a discrete function lets you scale and change applications quickly.

While this particular example focuses on synchronizing objects between two S3 buckets, it can be generalized to any other use case that involves coordinated processing of any number of objects in S3 buckets, or other, similar data processing patterns.

Before I dive into the details on how this particular example works, take a look at some alternatives for copying or replicating data between two Amazon S3 buckets:

In this use case, you are looking for a slightly different bucket synchronization solution that:

You need a scalable, serverless, and customizable bucket synchronization utility.

Your solution needs to do three things:

In the beginning, you read in the source and destination buckets as parameters and perform basic parameter validation. Then, you operate two separate, independent loops, one for copying missing objects and one for deleting obsolete objects. Each loop is a sequence of Step Functions states that read in chunks of S3 object lists and use the continuation token to decide in a choice state whether to continue the loop or not.

This solution is based on the following architecture that uses Step Functions, Lambda, and two S3 buckets: 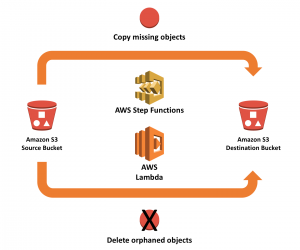 As you can see, this setup involves no servers, just two main building blocks:

To understand the synchronization flow in more detail, look at the Step Functions state machine diagram for this example. 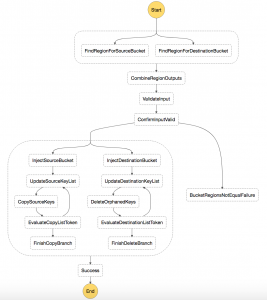 Here’s a detailed discussion of how this works.

To follow along, use the code in the sync-buckets-state-machine GitHub repo. The code comes with a ready-to-run deployment script in Python that takes care of all the IAM roles, policies, Lambda functions, and of course the Step Functions state machine deployment using AWS CloudFormation, as well as instructions on how to use it.

Fine print: Use at your own risk

Before I start, here are some disclaimers:

Step Functions execution starts with an initial set of parameters that contain the source and destination bucket names in JSON:

Armed with this data, Step Functions execution proceeds as follows.

First, you need to know the regions where your buckets reside. In this case, take advantage of the Step Functions Parallel state. This allows you to use a Lambda function get_bucket_location.py inside two different, parallel branches of task states:

Each task state receives one bucket name as an input parameter, then detects the region corresponding to “their” bucket. The output of these functions is collected in a result array containing one element per parallel function.

The output of a parallel state is a list with all the individual branches’ outputs. To combine them into a single structure, use a Lambda function called combine_dicts.py in its own CombineRegionOutputs task state. The function combines the two outputs from step 1 into a single JSON dict that provides you with the necessary region information for each bucket.

In this walkthrough, you only support buckets that reside in the same region, so you need to decide if the input is valid or if the user has given you two buckets in different regions. To find out, use a Lambda function called validate_input.py in the ValidateInput task state that tests if the two regions from the previous step are equal. The output is a Boolean.

The actual work is happening in another Parallel state. Both branches of this state are very similar to each other and they re-use some of the Lambda function code.

Each parallel branch implements a looping pattern across the following steps:

By breaking down large amounts of work into chunks, you can make sure each chunk is completed within the timeframe allocated for the Lambda function, and within the maximum input/output data size for a Step Functions state.

This approach comes with a slight tradeoff: the more objects you process at one time in a given chunk, the faster you are done. There’s less overhead for managing individual chunks. On the other hand, if you process too many objects within the same chunk, you risk going over time and space limits of the processing Lambda function or the Step Functions state so the work cannot be completed.

In this particular case, use a Lambda function that maximizes the number of objects listed from the S3 bucket that can be stored in the input/output state data. This is currently up to 32,768 bytes, assuming (based on some experimentation) that the execution of the COPY/DELETE requests in the processing states can always complete in time.

A more sophisticated approach would use the Step Functions retry/catch state attributes to account for any time limits encountered and adjust the list size accordingly through some list site adjusting.

Because the presence of a continuation token in the S3 ListObjects output signals that you are not done processing all objects yet, use a Choice state to test for its presence. If a continuation token exists, it branches into the UpdateSourceKeyList step, which uses the token to get to the next chunk of objects. If there is no token, you’re done. The state machine then branches into the FinishCopyBranch/FinishDeleteBranch state.

By using Choice states like this, you can create loops exactly like the old times, when you didn’t have for statements and used branches in assembly code instead!

Finally, you’re done, and can step into your final Success state.

When implementing this use case with Step Functions and Lambda, I learned the following things:

This approach gives you scalability by breaking down any number of S3 objects into chunks, then using Step Functions to control logic to work through these objects in a scalable, serverless, and fully managed way.

To take a look at the code or tweak it for your own needs, use the code in the sync-buckets-state-machine GitHub repo.