When packaging and deploying APIs into containers services, it is common for each service to serve more than one responsibility or many downstream dependencies. In such scenarios, the failure during the execution of one responsibility can often spread to the entire application and causing a systemic failure.
Let’s look at an example: imagine an e-commerce application to manage listing prices that has a REST API with two main endpoints being served by the same code, distributed in a container:

The write endpoint is more resource-intensive, having to wait for a database to persist the update and also make sure the cache is purged. If a lot of traffic is sent to the write endpoint at the same time, it will reserve, for example, all of the connection-pool and memory from the entire application, clogging requests to other endpoints as well. That affects not only customers that want to update prices but also customers that only want to get the latest listings price.

To solve this problem, it is necessary to separate specific duties across different resource pools. This article showcases how the bulkhead pattern at the service-mesh level can help achieve it and elaborate an implementation in Amazon Elastic Kubernetes Service (Amazon EKS).

The bulkhead pattern gets its name from a naval engineering practice where ships have internal chambers isolating their hull so that if a rock is to crack it, water can’t spread to the entire ship causing it to sink. See Figure 1 for a visual illustration. 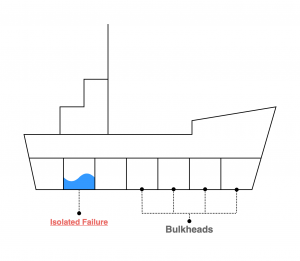 In software development, the practice is focused on isolating resources and dependencies so that systemic failure is circumvented, making systems generally more available but also more fault-tolerant to noisy neighbours since it is easier to recover from failures when they are less likely to cascade.

The isolation lays on separating resources into pools to split actions based on CPU, memory, network, or any other bursting resource that might be exhausted for other actions.

The following solution is an example of how the proposed scenario problem would be implemented by using AWS App Mesh in combination with Amazon EKS. This is one specific example to illustrate the practice, which could be used all the way from edge traffic serving down to code lines, isolating resources to minimize the blast radius of failures.

The focus here is to be pragmatic, rather than installing libraries and changing code in all applications that could benefit from this, implementing it in the infrastructure level reduces the complexity and also the transition is facilitated by avoiding the undifferentiated heavy lifting.

To improve the resiliency of the solution, it is possible to use the recently released App Mesh Circuit Breaker Capabilities, setting a resistance level to your application nodes on how much traffic they can handle. That prevents the functionality from being overwhelmed with traffic that is known to cause issues, favoring serving some customers rather than allowing failure to corrupt the entire feature.

As mentioned before, the solution uses Amazon EKS with AWS App Mesh, regardless of that, it is possible to implement it using other container orchestration tools, like Amazon Elastic Container Service (Amazon ECS) or even on pure in compute units, using Amazon EC2. The service mesh is the infrastructure layer segregating access whereas the Kubernetes Deployments are segregating compute reservations. Once AWS App Mesh and Amazon EKS are set up, follow the steps prescribed below:

Here are the prerequisites:

Start by deploying the demo application into your cluster. Make sure to configure kubectl to point to the desired cluster and to have permissions for the cluster / mesh assigned to your default AWS CLI user.

The deployment code will:

Cloning the repository and deploying the code

To facilitate failure simulation, the price-write deployment sets a container memory limit of 8 MB and has an environment variable called DATABASE_DELAY that simulates a network latency in seconds, “5s” is the configured delay.

Note that the requests are being served by Envoy Proxy from the Virtual Gateway. Also, the second request takes around five seconds to finish, which is the simulated network latency.

Now that the application is running, it is possible to start simulating failures and checking if the failures are restricted to a single endpoint and not to the whole application.

Let us see how sending enough requests to the endpoints can cause the service to fail. To do that, use the already deployed load testing tool to flood the pods with requests. See:

Due to the latency requests pile up, using the limited memory reservations and eventually the pod has crashes with OOM (Out of Memory), it is not serving any requests anymore. A detailed analysis will follow, but first let us check if the failure has spread.

Checking if failure is isolated

Notice that not only the service is still up, but its response time is not impacted by the failures of the price-write endpoint. The failure has been contained to the chamber now that there are individual reservations of both the network with the service mesh and the compute with the Kubernetes Deployment.

From all the requests performed during the test, 359 finished successfully with a 200 (OK) status code while other 2341 requests returned a 503 Service Unavailable error. If that was a real case the system would’ve ignored 2341 price changes and then stopped working completely, all requests from that point in time would be errored and its content lost, impacting all clients of that API.

Here is a timeline of the load test highlighting latency on successful and error requests:

Notice that some requests are served then the pod runs out of memory due to the high number of requests combined with the sustained network latency. Requests pile up occupying space in memory that is limited; the Kubernetes scheduler tries to restart the pod a few times and then it starts backing off, leaving the endpoint unhandled. Failures are lengthy and end up making the outage worst for the application and its underlying dependencies.

Even by using a Horizontal Pod Autoscaler or even Cluster Autoscaler, the errors will continue since they are caused by network latency. Autoscaling Pods or Nodes, in this case, might even make it worse since it will apply more pressure (more requests) to the already impaired/crashed downstream dependency.
The outcome is a general outage of the endpoint, even that the price-read wasn’t affected.

To increase resiliency of this specific endpoint and aim for impaired performance rather than complete outage, there is yet another component necessary.

That’s when the AWS App Mesh Circuit Breaker enters the picture, it will act as a pressure-valve, controlling how much pressure, or how many requests per second, the system is able to handle. Exceeding requests will be ignored, in order to avoid a complete breakdown of the system.
Let us see how that works in practice.

See it in action

In this example, running it for 35 seconds there were 128 requests that updated prices properly for the API’s clients. By making the performance and limits measurable is possible to scale accordingly and protect downstream dependencies from backpressure.

The main difference here is that even though the latency in the network impaired the pod’s performance on serving traffic, it didn’t cause a complete outage, still being able to continuously serve customers. See the following graph:

Since there are requests being held by Envoy (through the pending request pool), the latency is a bit higher, which can be configured as well.

Notice that failures are now faster since the circuit breaker opens when the connection pool grows unsustainably. That allows the system to recover and to continuously keep serving a percentage of the traffic, not taking the system down. That’s useful given that the network latency issue could be temporary and restored after a few minutes, the bulkhead combined with circuit breaker would have protected the database from having a massive backlog of queries this possibly prolong its impairment.

Moving forward, as requests are now possibly dropped, it is important to be aware that other dependent services or clients should handle failures or even take advantage of AWS App Mesh Retry Policies to further improve resiliency of requests that eventually fail.

To cleanup all resources used during the tests you can run:

That will delete the Amazon ECR repository, the service mesh, Kubernetes Namespace, and all underlying attachments.

The article has shown how to use AWS App Mesh to implement the bulkhead pattern in the network layer, avoiding redundant work on your application code thus providing a simple and powerful way of isolating system’s functions in order to avoid generalized outages.

After understanding the endpoint couldn’t handle too many requests at once, the fact the failure was isolated made it more straightforward to act on, using the circuit-breaker to prevent the endpoint from an outage, favoring a controlled impairment.

AWS App Mesh provides a breath of options to enable further optimization on reliability such as timeout configuration, outlier-detection and retry on-failure policies.

To learn more about App Mesh: