Organizations using Amazon Elastic Container Service (Amazon ECS), Amazon Elastic Kubernetes Service (Amazon EKS), or other container orchestrators all face the same hurdle to getting up and running quickly: how do teams effectively package their application source code in a container image with speed and efficiency? This journey from “source to image” can challenge organizations at many points during their adoption of container technology, whether just getting started or attempting to scale up to hundreds of workloads.

Regardless of the container orchestration engine being used today, the prevailing mechanism used to create container images remains the Dockerfile: a simple text file that specifies a base image along with a series of instructions to execute on top of it. This format has been incredibly popular, likely due to its initial learning curve and the transparency of the format.

The standardization of the format of container images around the Open Container Initiative (OCI) image specification is starting to open the door to new mechanisms for building container images that forego the need for a Dockerfile. Container orchestrators are coalescing around support for the OCI image specification, providing a portable packaging format that can be targeted by alternative tooling and still be consumed by the likes of Docker, Kubernetes, and Amazon ECS.

One of these alternatives to the Dockerfile is Cloud Native Buildpacks (CNB), an incubating project in the Cloud Native Computing Foundation (CNCF) that provides a mechanism to transform your application source code into an OCI-compliant container image without using a Dockerfile. The concept of a buildpack has historically been associated with platform as a service (PaaS) offerings such as Heroku and Cloud Foundry. This latest iteration of buildpacks can be thought of as decoupling the build mechanism of these platforms so that it can be consumed by the broader container community. As this project has matured, it has been adopted by a number of vendors and tools.

A primary benefit of the CNB project is it removes the need to author a Dockerfile to build a container image, which allows application development teams to get their code running in container platforms quicker. This provides an aspect of a PaaS offering like Heroku and Cloud Foundry while deploying to flexible container-based services. The technology is language-agnostic, and there are open source builders that support a range of platforms like Java, .NET Core, Ruby, Node.js, Go, and Python.

Leveraging the CNB project also provides organizations with a standard process to build container images that can be quickly adopted. The alternative to this is for an organization to determine its own processes for creating images, which for more decentralized organizations can result in fragmented container image processes across different teams, as well as additional overhead in solving and maintaining similar solutions.

The CNB project promises a number of additional benefits, including:

In this article, we’ll provide a reference pipeline using AWS services that will build a container image directly from application source code without the need for a Dockerfile. This will allow us to examine how to integrate the Cloud Native Buildpacks project with AWS CodePipeline and AWS CodeBuild to create a delivery pipeline that packages container images to then be deployed to container-based services such as Amazon EKS or Amazon ECS.

Building container images with Cloud Native Buildpacks is a different experience than using other tools like a Dockerfile. As such, let’s take a look at the CNB ecosystem and some of the core concepts involved.

There are main concepts introduced by the CNB project, which are documented well on the official site. For the purposes of this blog post, there are a few to call out in particular:

Here is how these concepts interact at a high level: 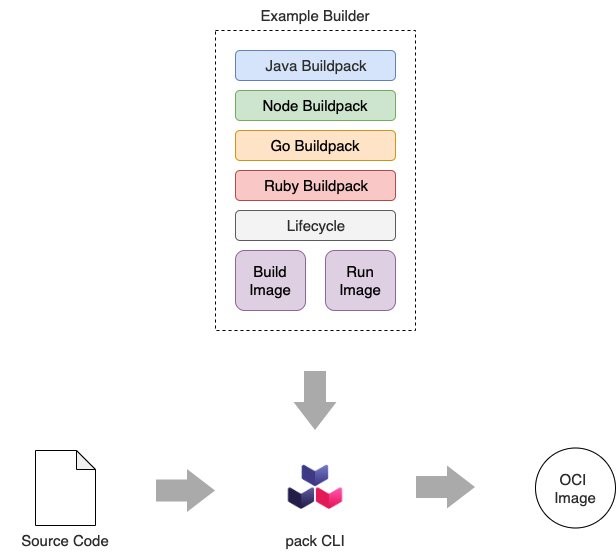 The ecosystem can be broadly split into three parts:

During this blog post, we will interact with the CNB project via the pack CLI, as well as an open-source builder and buildpack implementations from the Paketo project. The CloudFormation template related to this blog post can be found on GitHub. 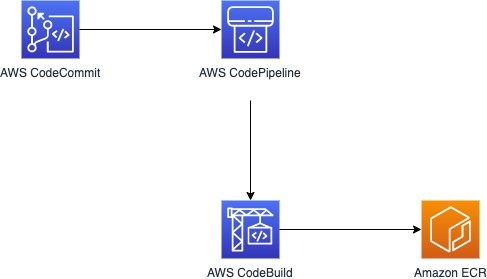 The steps in the process are as follows:

The prerequisites for this solution are:

To deploy the pipeline, complete the following steps:

By the time the CloudFormation stack has completed its deployment, the CodePipeline will already be running or perhaps have completed. The CloudFormation template that was deployed includes a custom resource that initializes a new Java-based Spring Boot application using the Spring Initializr and commits it to the CodeCommit repository so we have a working application ready to test with.

There is nothing significant that makes this application compatible with CNB. We are using a Maven-based Java project, but this could alternatively be an NPM-based Node.js application, a Go application, or any other supported platform.

Notice that there is no Dockerfile present in the source code, which we would typically use to containerize the application. Instead, CNB will take responsibility for taking our source code and building an appropriate container image.

While we wait for the first execution to complete, let’s examine the structure of the CodePipeline: 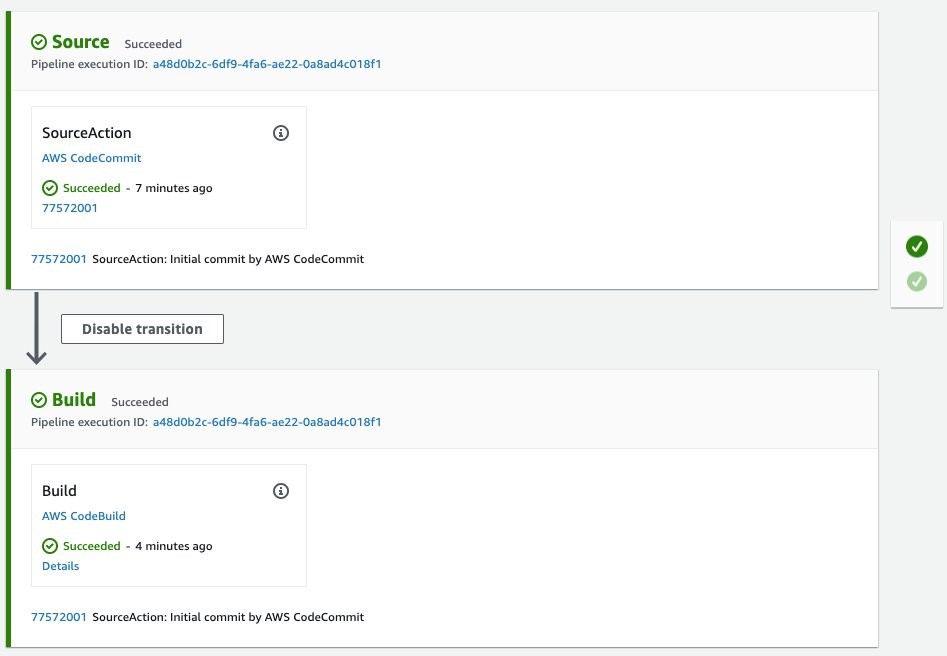 Once the pipeline completes, an image will have been pushed to the Amazon ECR repository created by the AWS CloudFormation stack:

Additionally, because CNB produces OCI-compliant images, we can still leverage features such as container image scanning provided by Amazon ECR to detect vulnerabilities in the images.

With the build complete, the logs from CodeBuild will illustrate some of the features of CNB at work.

Unlike when using a Dockerfile, CNB just took care of a lot with very little direction. We now have an OCI-compliant container image pushed to Amazon ECR, ready to be deployed, that::

To get a better idea of how buildpacks produced the container image, let’s break down some of the output log to look at what happened.

The first buildpack to execute installed a Java Development Kit (JDK) and Java Runtime Environment (JRE), which are needed to build and run the application. In the interest of following Java best practices, the buildpack installs the JDK in the build container such that it is only available while the application is being built and packaged, after which it will be discarded. The JRE is installed in the final image that is produced and will be used at runtime to execute the Java code.

In this case, the Paketo builder used the Bellsoft Liberica distribution by default, but this can be swapped out for alternatives such as AdoptOpenJDK.

Now that the JDK has been installed, the Maven buildpack has run and packaged the Java application inside the build container. This is useful because it means that the application can be built consistently, whether locally or in Continuous Integration tools, with few system dependencies necessary to first build the application before creating the container image. A similar process is executed for Node npm/Yarn and Go Modules.

Several other buildpacks run after the application is built to perform various tasks. The most important is wiring up an appropriate entrypoint for the container, which is done automatically by the Executable JAR buildpack, since we are using the Spring Boot application framework.

After all of the buildpacks have contributed to the relevant layers, pack assembles the final image and adds various metadata as image labels.

Finally, a cache image is produced to speed up subsequent builds. For this particular application, the buildpacks are caching the JDK and Maven dependencies so that they need not be downloaded again unless any changes occur.

Let’s take some time to examine the CodeBuild project to understand what is happening. The following is the buildspec.yml that is being specified in CloudFormation:

This CodeBuild project is relatively simple and can be broken down into several tasks:

The project is also configured to export the IMAGE_TAG environment variable, which allows CodePipeline to reference it and make it available to downstream actions in the pipeline, for example to trigger a deployment to Amazon ECS or Amazon EKS.

To explore how the buildpack process behaves when we make a code change to an application, let’s modify the application source code and push the changes to CodeCommit to trigger a new build. If you wish, you can do this by cloning the CodeCommit repository and making the changes on your local machine. However, for simplicity, we’ll demonstrate doing this directly through the console.

Navigate to the CodeCommit repository that was created by the CloudFormation stack and select Add file, then Create file.

This will provide us with a user interface that we can use to add a new file and commit it to the repository. Let’s add an index.html page that can be served by Spring Boot: 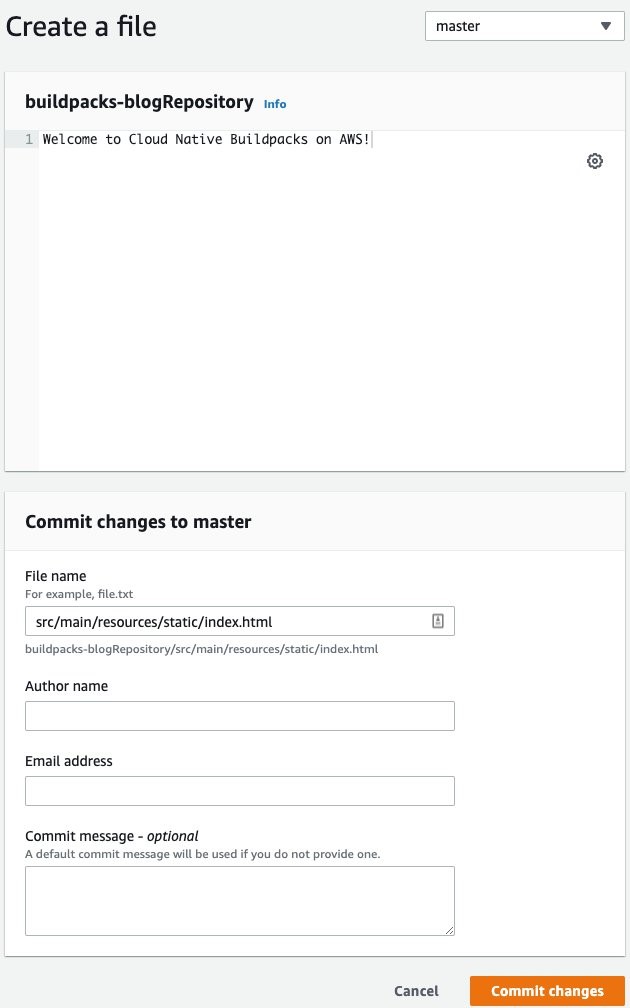 Once the change is committed, CodePipeline will initiate a new execution. Let’s compare these:

Even though we changed our application code, the build was almost 50 percent quicker. This is due to two aspects of buildpacks:

Next, let’s compare the layers of the images from the two different builds:

Interestingly, two layers of the later layers in our image have been altered, but some subsequent layers are unchanged. How could this happen? With a Dockerfile, when you change a layer, every subsequent layer has to be rebuilt, pushed, and pulled. This illustrates another great benefit of CNB, which is that due to the way that layers are constructed, pack can update an intermediate layer of the image and push just that change, rather than a cascading set of layer changes. This makes build times, as well as pushing and pulling the image to and from container repositories like Amazon ECR, a lot more efficient.

To avoid incurring future charges, clean up the resources created as part of this post.

Once this has been completed, open the CloudFormation console and delete the stack to remove the remaining resources.

This blog has only scratched the surface of the benefits of buildpacks and how they work, as well as integrating the project with other AWS services such as CodePipeline and CodeBuild.

To learn more about buildpacks, you can visit buildpacks.io and watch this session from the recent virtual KubeCon event.