Why might customers consider deploying applications on a multi-architecture Amazon Elastic Kubernetes Service (Amazon EKS) cluster, with both ARM-based and AMD-based instances?

Cost optimization is often a key business driver of my customers. It’s also a key pillar for a well-architected design. Usually, there are a few widely applicable strategies for you to save cost on compute resources. For example, you can mix purchase options such as Savings Plans, on-demand and Spot instances, and you can right-size your compute resources.

AWS Graviton2 (ARM based) provides up to 40% better price performance over comparable current generation AMD-based instances for a wide variety of workloads. Since the initial launch of Graviton2 instances in Dec 2019, it has more integrations with AWS services such as Amazon Elastic Kubernetes Service (Amazon EKS), Amazon Relational Database Service (RDS), Elasticache, AWS CodeBuild, etc., which makes Graviton2 another widely applicable strategy for you to save cost.

A hybrid ARM and AMD deployment takes advantage of the Graviton2 instances for cost saving, at the same time lowers risks to migrate from AMD to ARM in one shot. With compatibility tested, you will be able to compile, build and deploy your existing code into a multi-architecture EKS cluster without any code change.

The estimated hourly cost for running the resources deployed in this blog post with default settings is less than $1. Be sure to complete the cleanup step once completed. 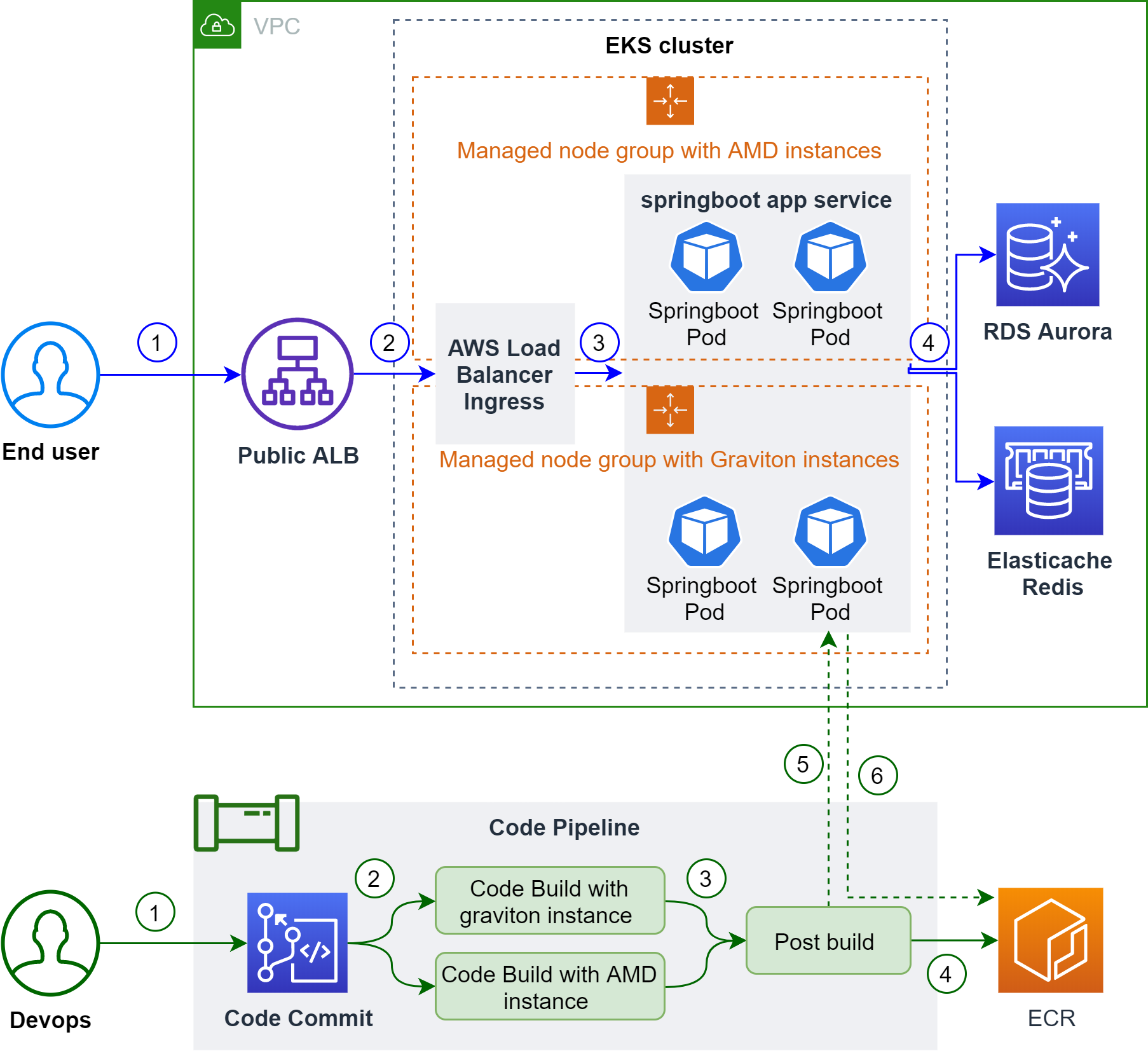 Step 3: Commit code to CodeCommit to trigger the pipeline

1. Visit the ALB address output from step 4 in the last section. NOTE: You need to wait for about 1 minute before ALB is successfully provisioned.

3. Refresh the page several times to observe the Node Name switch. The nodes are running AMD and ARM (Graviton) correspondingly.

To tear down the environment, you can execute the following commands:

In this post, I walked though how to build a multi-architecture EKS cluster, and how to create an automatic deployment pipeline to deploy your existing Java Spring Boot application code into the EKS cluster.

Try this sample to start leveraging Graviton2 instances to save cost in your organization.