Amazon Elastic Kubernetes Service (Amazon EKS) is a managed service that runs Kubernetes on AWS without needing to install, operate, and maintain your own Kubernetes control plane or nodes. Amazon EKS supports native virtual private cloud (VPC) networking with the Amazon VPC Container Network Interface (CNI) plugin for Kubernetes. This plugin assigns a private IPv4 or IPv6 address from your VPC to each pod. The VPC CNI allows Kubernetes pods to utilize raw AWS network performance and integrations with other AWS services. In this post, we discuss two features of the VPC CNI plugin: CNI custom networking and security groups for pods. We give a walkthrough of their combined use to provide a scalable, secure architecture for Kubernetes workloads.

AWS recommends deploying Amazon EKS clusters into VPCs with large Classless Inter-Domain Routing (CIDR) ranges. This recommendation is based on how VPC CNI allocates IP addresses (one IP per pod) and the limited cluster capacity as the number of workloads in the cluster grows. In scenarios where it may not be possible to use a large CIDR range (such as in environments that share an IP address space with on-premises infrastructure), you can attach a CIDR range from the 100.64.0.0/10 or 198.19.0.0/16 ranges to your VPC. These additional ranges, in conjunction with CNI custom networking, provide additional IP space for Kubernetes pods.

An important concept in container networking is micro-segmentation. This involves the control of which Kubernetes pods can talk to which other pods within the cluster and the control of which pods can talk to dependent services outside of the cluster. When enabled, security group for pods integrate Amazon Elastic Compute Cloud (Amazon EC2) security groups with Kubernetes pods, providing AWS native networking segmentation for Kubernetes workloads. Also, the VPC CNI creates a separate elastic network interface (ENI) for each pod, instead of the default configuration where multiple pods share an ENI. Different security groups can be attached to each Kubernetes pod because each pod has its own ENI. A common example is limiting access to Amazon Relational Database Service (Amazon RDS) databases to pods with a certain a security group. For more information on security groups for pods, see the launch blog post.

To help understand the traffic flow when running CNI custom networking alongside security group for pods, it’s important to understand the basics of VPC CNI.

In the default VPC CNI configuration, the Amazon EC2 instance is provisioned with one ENI attached to an underlying subnet with the Worker Node Security Group attached. A primary IP is attached to the ENI that is used to access the host. As pods are deployed on the Amazon EC2 instance, the VPC CNI attaches secondary IPs from the VPC to the same ENI until the limit on that ENI is reached. The VPC CNI provisions a second ENI on the same subnet and fills it with the secondary IPs. This process continues until the ENI and secondary IP limits of an instance are reached. 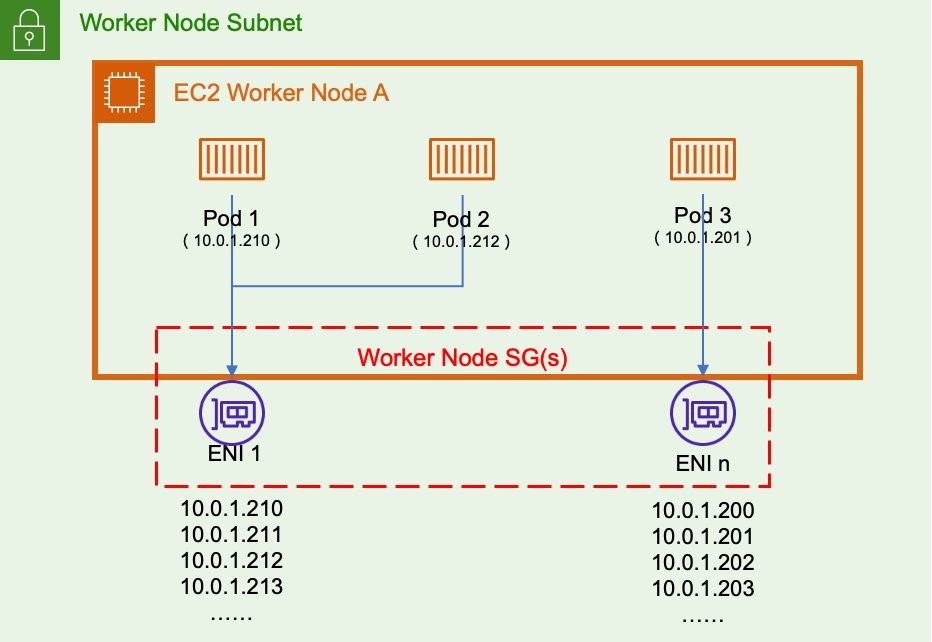 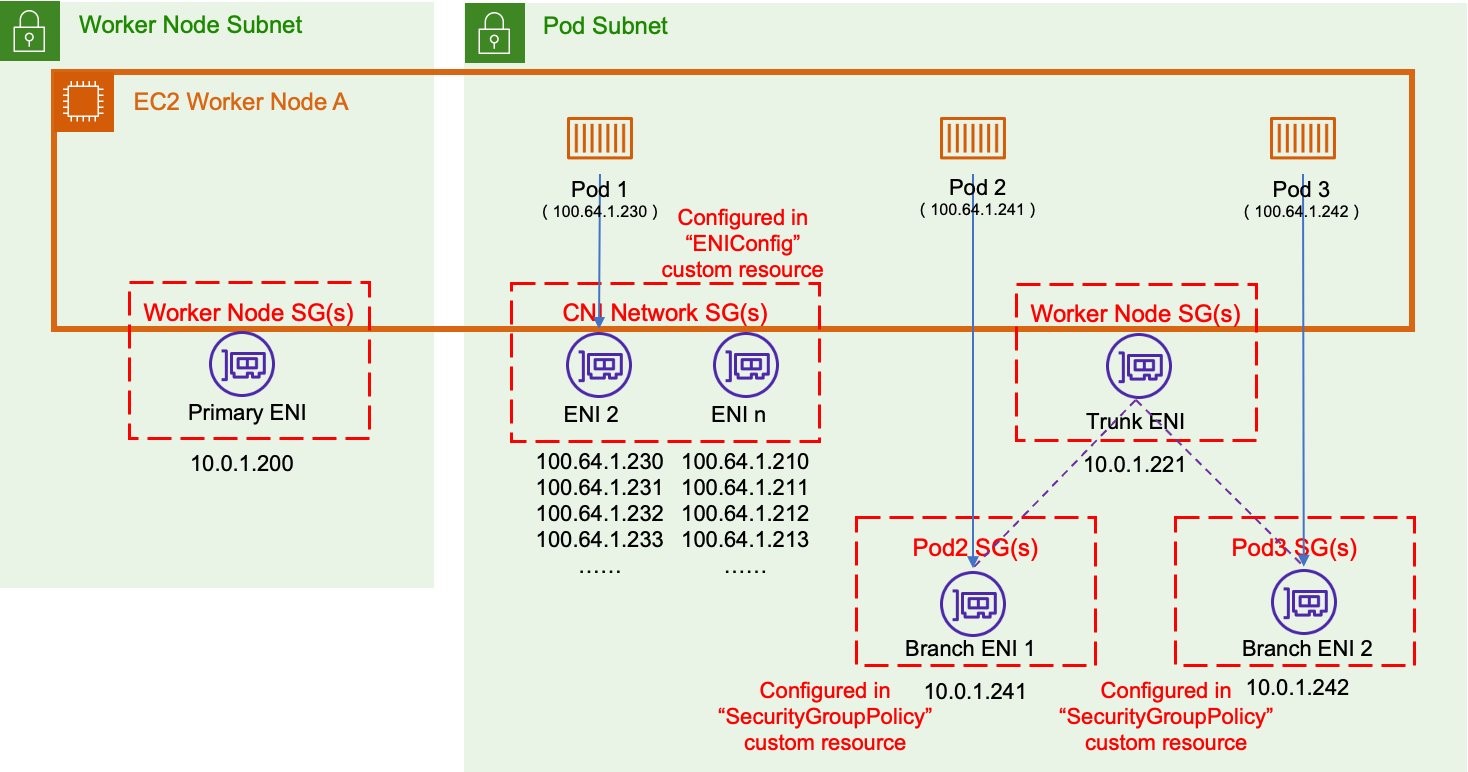 With the relevant security group rules established, all Amazon EKS traffic within the VPC could route to each other (Amazon EKS control plane ENIs, worker node primary ENIs, and pod ENIs). However, as the custom networking subnets are not routable outside of the VPC, we need to consider how the routing would work for inbound traffic coming into the cluster and for the workload traffic communicating to dependencies outside of the VPC.

If the pods communicate their dependencies outside of the VPC, then we set up NAT to allow the following.

By default, when a pod communicates to any IPv4 address that isn’t within a CIDR block that’s associated to your VPC, the VPC CNI translates the pod’s IPv4 address to the primary private IPv4 address of the primary ENI of the node that the pod is running on. With the built-in NAT, pods in the non-routable subnets can talk to dependencies outside of the VPC.

We can also change the default configuration by setting AWS_VPC_K8S_CNI_EXTERNALSNAT to true, which means an external source network address translation (SNAT), such as a VPC NAT Gateway, is used instead of the pod SNAT done by AWS CNI. More details can be found in this public documentation.

Disable SNAT if you need to: allow inbound communication to your pods from external VPNs, direct connections, external VPCs, and pods that don’t access the internet directly through an internet gateway. However, your nodes must run in a private subnet and connect to the internet through an AWS NAT gateway or another external NAT device.

The following diagrams highlight the typical Amazon EKS setup with CNI custom networking alongside security groups for pods and some of the traffic patterns. 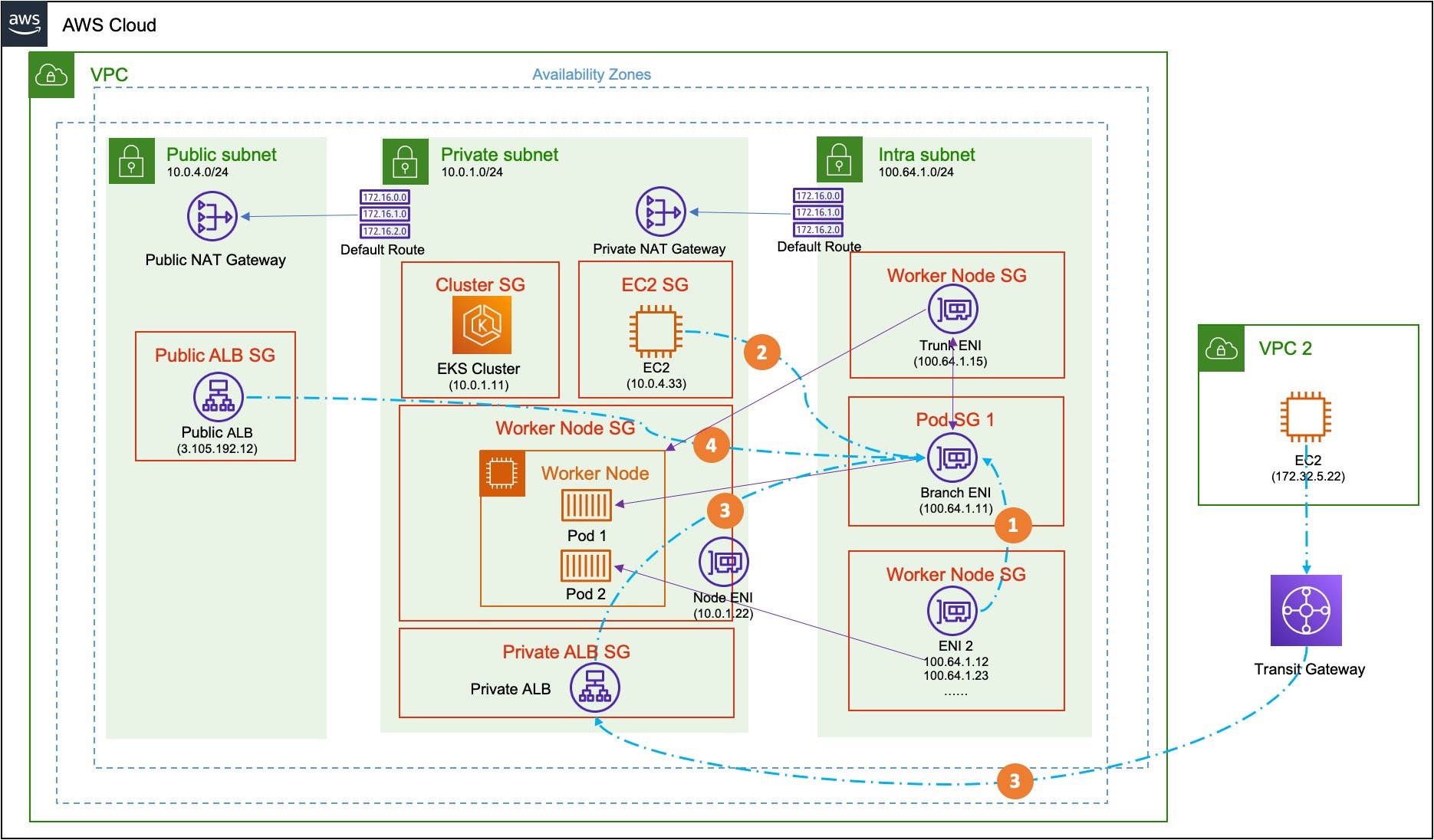 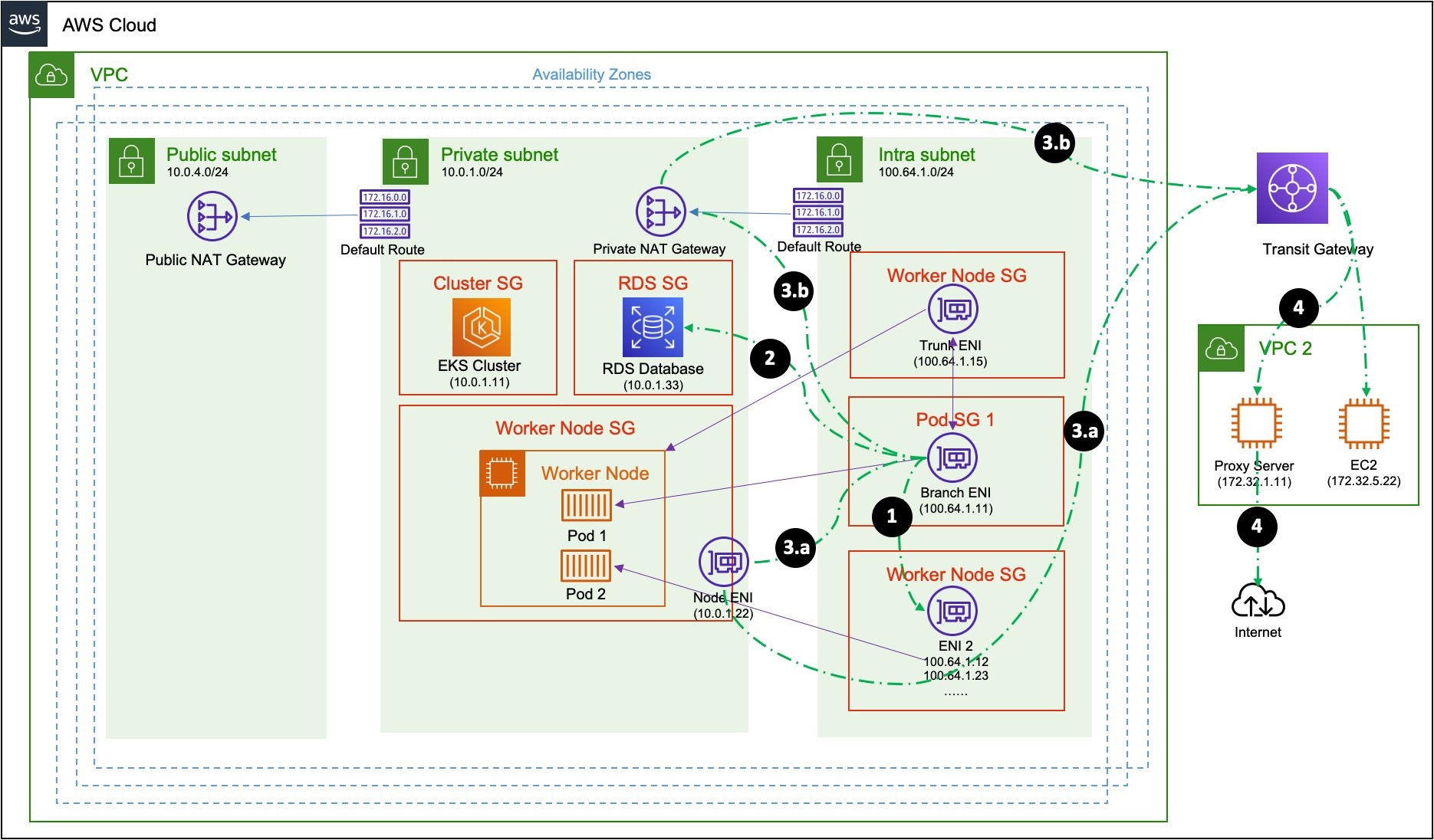 In the previous diagrams, different security groups are attached to a pod (branch ENI), worker nodes, the Amazon EKS control plane, Amazon RDS, and ALB to control network inbound and outbound access from them.

This walkthrough shows you how to automate the setup of an Amazon EKS cluster with CNI custom networking alongside security groups for pods. The sample code for deploying this stack in Terraform is hosted in this GitHub repo.

The following code is to trigger the build:

This Terraform module will deploy an Amazon EKS cluster with custom networking and security for pods configured.

The following is a breakdown of what the module deploys:

First, to set up CNI custom networking, set the required environment variables for the AWS CNI plugin. This is an aws-node daemon set deployed into the cluster:

Here AWS_VPC_K8S_CNI_CUSTOM_NETWORK_CFG enables CNI custom networking, and ENI_CONFIG_LABEL_DEF defines the worker node label that selects which ENIConfig to use for each node. The topology.kubernetes.io/zone label is automatically set on each node in a managed node group.

Second, set up the ENIConfig custom resource configuration that points to the intra subnets. An example of ENIConfig for an availability zone is described in the following code:

Then we need to create security group policies, which are shown in the following code:

With this policy in place, all pods with the role: test-role label use a branch ENI with the specified security group(s) attached. More on security group policy can be found here.

The Terraform build takes about 14 minutes to finish the following command to set up kubectl to access your cluster:

You can see the two nginx pods are launched into 100.64 subnet. When you search the IP address of the pods (100.64.3.48 in our case) from the Network Interfaces section of the Amazon EC2 console, you see that the ENI has the aws-k8s-branch-eni description and the security group with the example_sg name is used for the ENI, as shown in the following diagram. 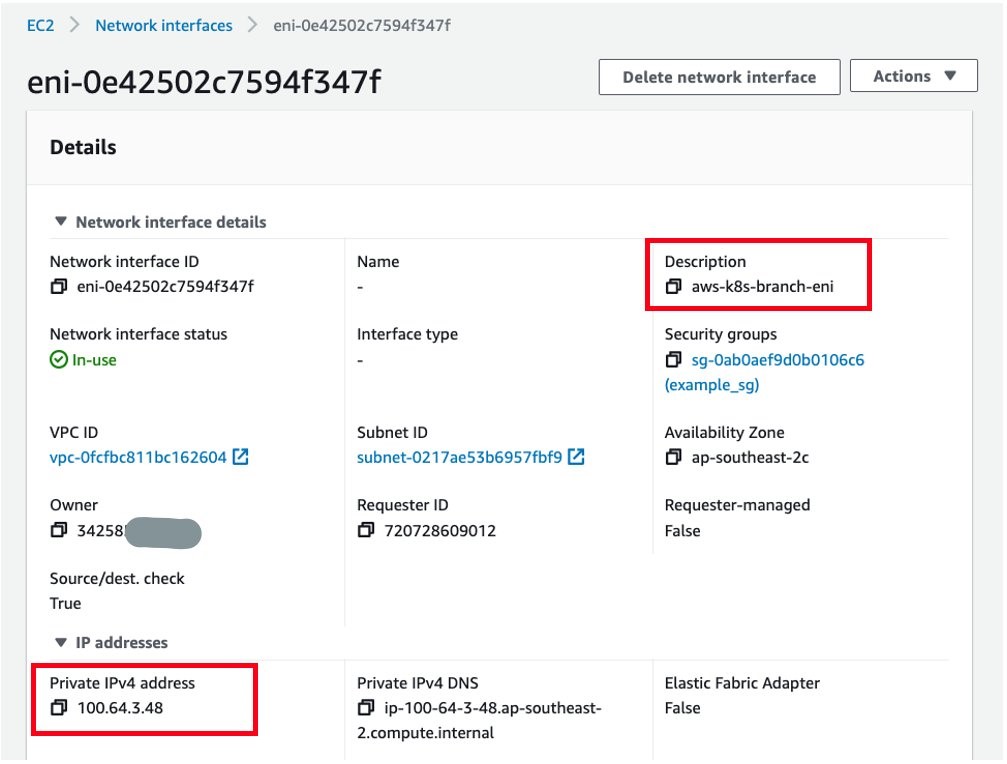 You can add more resources, such as Amazon RDS, into your VPC to further test the specific use cases you are after.

When you are done testing, your resources can be cleaned up by running the following:

With custom configurations of the AWS CNI plugin, CNI custom networking is enabled, which gives non-routable 16 IP addresses for each cluster while maintaining the common ingress and egress traffic patterns. In addition, pod security groups use a VPC network for communication and security groups to control inbound and outbound traffic.

The following are some further readings on Amazon EKS pod networking: