Windows Communication Foundation (WCF) is a framework created by Microsoft in 2008 for building service-oriented architecture (SOA) applications. It provides a set of libraries for building web services, using different network protocols to send and receive data between service endpoints.

With the introduction of .NET Core in 2016 and the emergence of microservices, our customers have gradually adopted other highly interoperable, cross-platform, language-agnostic, and high-performance solutions for building web services, such as REST APIs on ASP.NET Web API and Google Remote Procedure Call (gRPC). However, it is common that many organizations still run their legacy WCF-based applications on Windows platforms. In addition, many of our customers adopt container strategies and wish to containerize their legacy WCF workloads to run on AWS container services so that they can fully realize the benefits of containerization—increased operational efficiency, reduced infrastructure cost, increased development and deployment agility with standardized builds, and deployment processes across their organization.

This blog post discusses the background of WCF, .NET, and a few other alternatives to WCF in .NET. It also recommends different solutions and strategies for migrating and modernizing WCF workloads onto AWS container services.

WCF was introduced in .NET Framework 3.5, providing a set of libraries for building SOA web services. WCF workloads follow client-server architecture using two primary network communication protocols: HTTP and NetTCP, a high-performance, TCP-based network protocol introduced specifically in WCF. NetTCP-based WCF workloads require that both the client and server are implemented in .NET Framework. In 2016, WCF was removed from Microsoft’s strategic, cross-platform successor of .NET Framework, .NET Core, which is now called .NET. In this blog post, we will use .NET Core and .NET interchangeably.

Since WCF is not supported in .NET, our customers are encouraged to use ASP.NET Web API (REST APIs) or gRPC to build new web services in .NET. gRPC is cross platform, lightweight, highly performant for building web services, and officially supported in .NET. In some cases, gRPC-based applications provide even higher performance, with the flexibility of being language agnostic, when compared to NetTCP-based WCF workloads.

In 2019, .NET Foundation sponsored an open-source project called Core WCF, which was later jointly supported by AWS, to provide a port of WCF to .NET. To be able to use WCF in .NET, you need to first port your existing .NET Framework applications to .NET and replace the WCF libraries with the comparable libraries available in Core WCF. At the time of writing this blog post, certain features from WCF might not be supported in Core WCF. Hence, we recommend that you check out the official announcements from the Core WCF team.

With WCF in particular, we are often asked by our customers for guidance in modernizing their WCF workloads, specifically, how to run their WCF workloads on AWS container services. With  .NET, Core WCF, other technologies such as REST APIs on ASP.NET Web API, and gRPC, there are plenty of options to migrate or modernize their WCF workloads onto a container service. You can replatform or refactor your workloads to be hosted on AWS by utilizing one or more of the strategies mentioned in the 6 strategies for Migrating Applications to the Cloud blog post. This is described in the following sections.

You can Dockerize your WCF workloads using one of the Microsoft Windows base images and deploy the workloads to one of the AWS container services. Compared to the refactoring approach, this approach generally involves fewer changes to the application and, hence, decreased time to market. It also maintains compatibility, so it reduces any potential impacts to the existing workloads. However, some changes might be required to ensure all current features are working as expected in a container environment. You need to also spend efforts in preparing the container. This approach is most suitable for the following workloads:

We advise you to conduct thorough application code assessments that might not work or might require changes to work in Windows containers, such as reading and writing permissions to the Windows Registry; local file storage; related domain-joined security features, such as Windows authentication; in-memory local session data; and so on. Extra efforts might also be required, such as installing and configuring the tools and software that are currently required in the virtual machines (VMs) to the containers. These changes and extra efforts can vary depending on the current setup. It’s important to take them into account to estimate the work required for this approach.

The containerized workloads are supported on the following services:

Customers adopting this approach should also consider the containers’ size in their architectural and operational considerations. Sizeable Windows container base images can cause prolonged startup time and could impact the time taken in scaling events, such as scaling out. Building Windows-based containers requires using Docker on Windows, which is equally important; thus, having a continuous integration and continuous delivery (CI/CD) system that is capable of building Windows containers is required.

In this approach, we recommend refactoring the WCF workloads to cross-platform .NET workloads. Refactoring is most suitable for you if you have a strategy and are willing to spend extra effort to refactor and containerize the workloads to .NET running on Linux or Windows containers. By refactoring to .NET, you can enjoy a wide range of benefits:

Our customers generally have two options in this approach:

The following table summarizes the high-level steps required for both replatforming and refactoring.

The modernized workloads can be hosted in both Windows and Linux containers on the following platforms:

In the following examples, we will replatform and refactor the server-side application from a WCF-based system to Amazon ECS with Fargate. The system follows the traditional client-server architecture, and both server and clients use WCF on .NET Framework 4.8.

The examples require the following tools:

In this example, we containerize the WCF server-side application into an Amazon ECS cluster and host it using Fargate. The following is the new architecture. 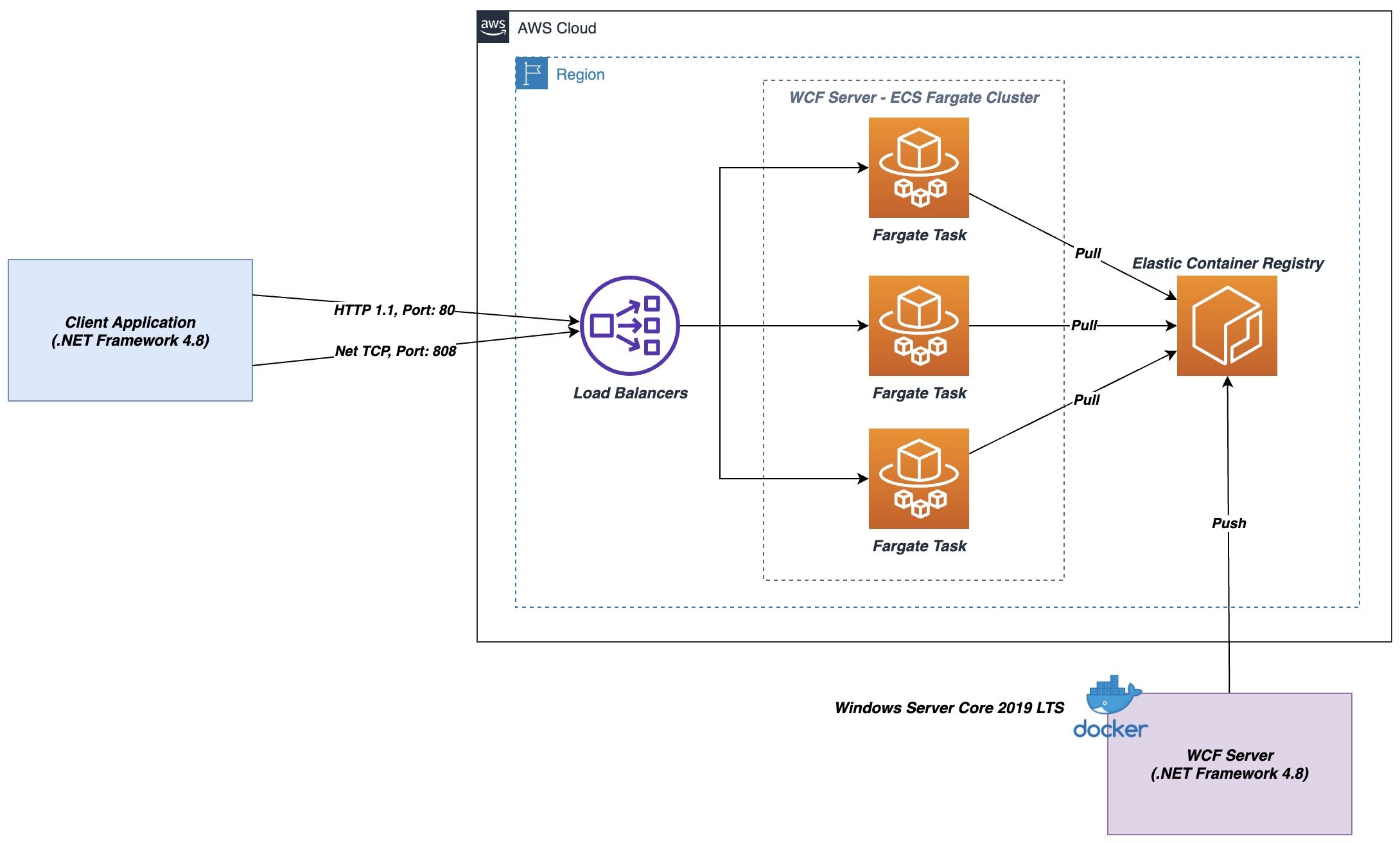 Here is the Dockerfile for this solution with the following notes:

Since this is a Windows base image, switching to Windows containers mode on Docker Desktop is required. Create a new Amazon ECS cluster using the following commands:

Once the stack is created, let’s inspect the Docker container size:

Use the following command to clean up the resource:

There are a few implications due to large container size: 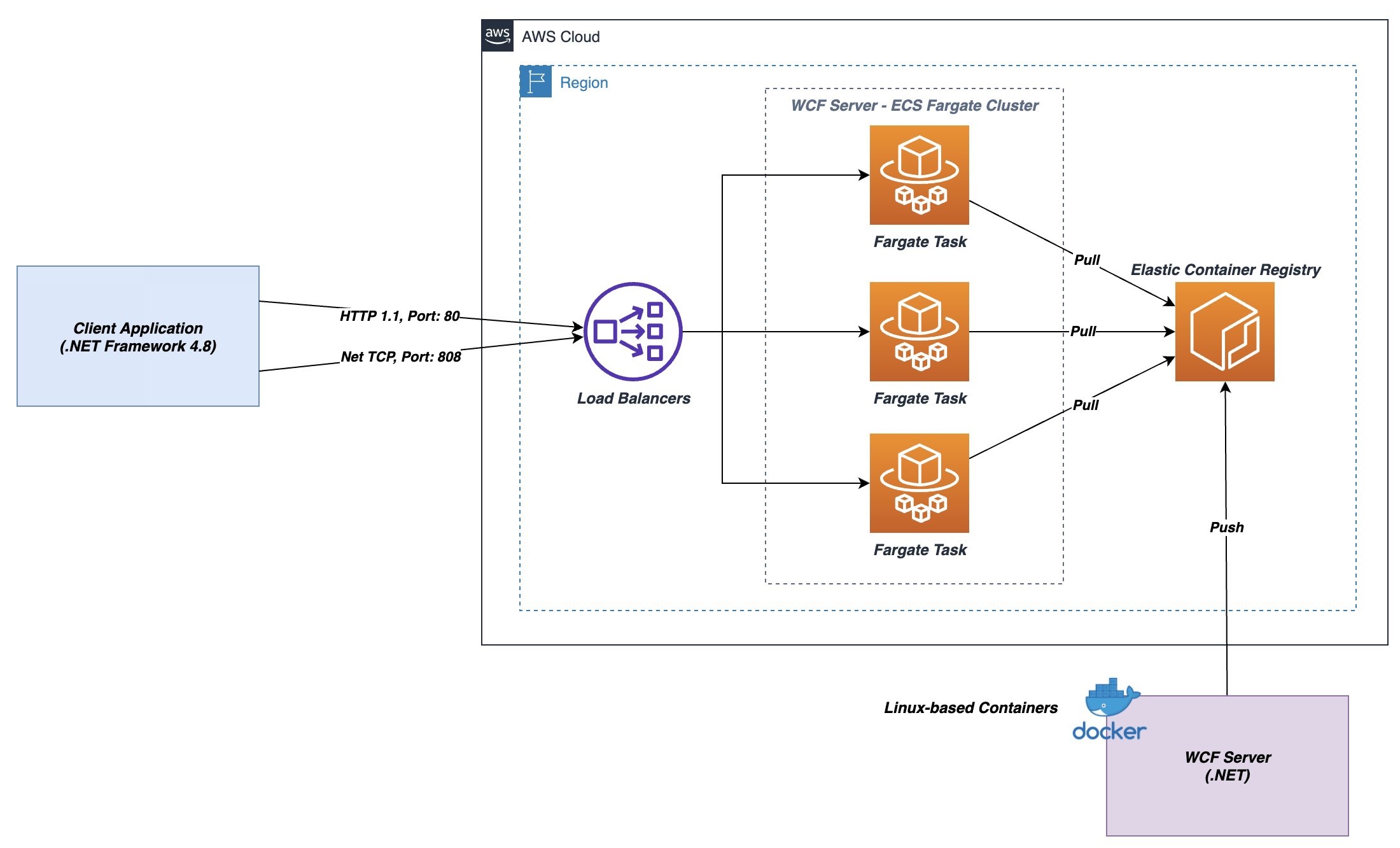 Here is the Dockerfile for the modernized solution with the following notes:

Inspect the size of the container image:

In this example, we deployed a modernized WCF workload to Amazon ECS with Fargate. The workload is license-free, is significantly smaller in size, has a quicker startup time, and is highly optimized, hence requiring smaller compute and storage requirements while offering better overall performance.

Use the following command to clean up the resource:

In this blog, we walk you through different options for migrating and modernizing WCF workloads onto one of the AWS container services. Replatforming is more suitable for workloads that require minimal application changes and maintain backward compatibility. Our customers can also benefit from refactoring the workloads onto a modern .NET using ASP.NET Web API, gRPC, or Core WCF. The refactored workloads work across platforms and can be run on both Linux and Windows containers, hence enabling customers to fully realize the benefits of containerization.

Customers are also encouraged to check out the following resources: