Update 08/05/22: We updated the title and conclusion to improve the accuracy of wording.

On the other hand, Local Zones come with the limitation that only single Availability Zone (AZ) is available, Amazon EC2 instance types are limited, and only Application Load Balancer (ALB) is available for load balancing. Hence, for applications on Amazon Elastic Kubernetes Service (Amazon EKS), it requires additional configurations to run Amazon EC2 worker nodes, and ALBs for Amazon EKS clusters.

Our goal is to provide an example for running the WordPress application workload in the Local Zone on Amazon EKS, and failover to the region in the rare event of an issue in the Local one.

The following diagram shows the high-level architecture, for running a WordPress website on Amazon EKS in the Local Zone.

When the customer is connecting to the primary site (Local Zone), the request is served by the ALB in the Local Zone, and the backend servers are hosted by Kubernetes pods, running on the self-managed Amazon EC2 nodes. The backend database in the Local Zone is an Amazon EC2 instance with MariaDB installed.

For the backup site in the Region, there is an ALB and Kubernetes pods running on a managed node group. The backup database is running on Amazon Relational Database Service (Amazon RDS). Amazon RDS is a managed Database-as-a-Service (DBaaS) that makes it easy for IT administrators to set up, operate, and scale relational databases in the cloud. For data replication, we use AWS Database Migration Service (AWS DMS) to replicate data from the Amazon EC2 database instance in the Local Zone to the Amazon RDS instance in the Region. 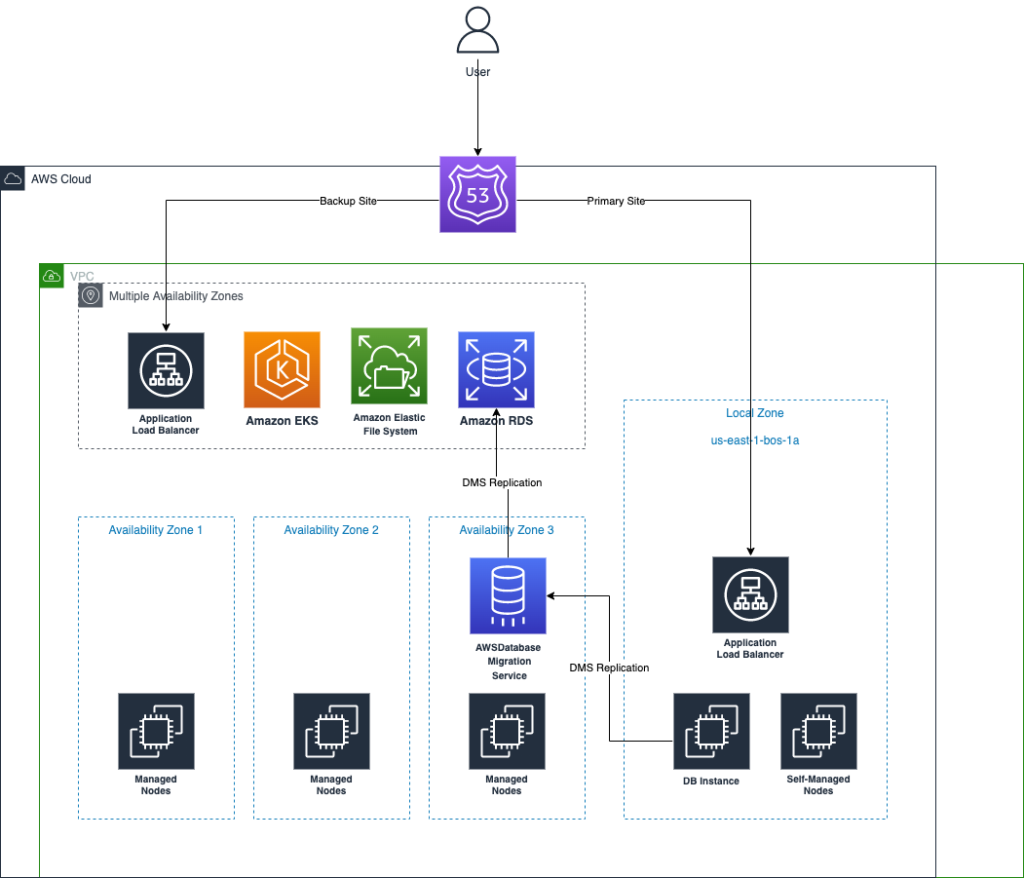 Deployment in the Local Zone

Now clone the source code to your working directory and configure a few aliases.

The first thing we’ll need to provision for this architecture is a VPC, containing both Local Zone and AZs for the Amazon EKS cluster and database instances. There are three public and three private subnets in the AZs, one private, and one public subnet in the local zone.

In the main.tf, we use vpc module to create the subnets in the AZs. For Local Zone subnets, we create aws_subnet resources.

To create the VPC, let’s review and define the input variables. The VPC is in us-east-1 , the Local Zone is us-east-1-bos-1a. You need provide a name and vpc_cidr for the VPC.

In the output, or run terraform output to get the VPC ID and subnets IDs, including the subnets in the AZs and the local zone. For deploying additional resources like Amazon RDS, Amazon EKS, and Amazon EFS in the upcoming steps, you can use the subnet IDs from the output here.

Change the working directory to 02-eks and edit the variables.

Modify the variables, mainly the resource IDs of VPC and subnets (by copying the partial output from the first module)

Below are some code snippet in the main.tf:

In the eks_blueprints_kubernetes_addons module in the main.tf, you can enable several add-ons directly, and the module creates both IAM Roles for Service Accounts and installs the helm charts. I use Amazon EFS CSI driver, AWS Load Balancer Controller and External DNS, so I set the respective keys and their values to be true. These add-ons will be deployed by the Terraform module after Amazon EKS cluster creation.

After the command completed, the EKS cluster and nodes on the local zone and add-ons have been deployed. By running kubectl get node you will be able to find node(s) in us-east-1-bos-1a zone, and running kubectl get pod you can find aws-load-balancer-controller and external-dns pods are running and ready.

In the following sections, we deploy the necessary AWS resources for WordPress, which is our demonstration application for this post. If you are going to deploy your own application and would like to know some caveats related to Amazon EKS in the Local Zone (especially for ALB Ingress), you can fast forward to the Step 6 directly.

WordPress on Kubernetes requires a persistent volume to store the application and data. Amazon EFS is chosen for this demonstration, because we need the storage to be accessed from the Local Zone and AZ. On the other hand, if your application accesses the PV frequently and requires low latency, consider Amazon EBS for the Persistent Volume, and you need to have other mechanism to replicate or backup data on Amazon EBS volumes from Local Zone to the Available Zones.

Now let’s create Amazon EFS resources using Terraform, get the Amazon EFS filesystem, and get the access point IDs for the volumeHandle of PV.

For the database tier, we run MariaDB on Amazon EC2 in Local Zone as the primary site, Amazon RDS in the Region, and use AWS DMS to replicate the tables and records from Amazon EC2 instance to Amazon RDS. We create the resources using the Terraform module located in 04-database directory.

If you haven’t created required AWS DMS role before, please specify the create_iam_roles = true in the demo.auto.tfvars file. If you don’t have an SSH key pair, please refer to the docs to create one and replace the key name my_ssh_key_name in the .tfvars file.

You can use SSH into the DB instance via a bastion host (details can be found in this blog), or use SSM to login the instance and configure the database. Please ensure that you have installed Session Manager plugin mentioned in the documentation.

After successfully starting the MariaDB server, we run the scripts below to create wordpress database and wordpress user for WordPress post data. Also, grant the necessary privileges for replication. Replace wordpress99 for the user database password.

To achieve high-availability for the database tier, we create an Amazon RDS of MariaDB in region as stand-by replica and use AWS DMS to replicate data between MariaDB on Amazon EC2 and Amazon RDS for MariaDB.

In the terraform module, we create the required AWS resources, including IAM roles, AWS DMS instance, source and target endpoints, as well as the AWS DMS Replication task and use Full load + CDC to copy all data from MariaDB on Amazon EC2 and continuously replicate data changes to Amazon RDS for MariaDB.

With the below snippet of the of table-mappings JSON file, AWS DMS replicates all tables in wordpress database from MariaDB on Amazon EC2.

We are going to deploy Amazon Route 53 records and Health Checks for both ALB in the local zone and AZ with CNAME records.

Here’s code snippet of how we setup our Health Check and Failover Policy using Terraform.

You can edit the main.tf, modify the local variables and run terraform CLIs below to deploy the Amazon Route 53 resources.

After AWS resources are created, we are going to deploy the Kubernetes resources for our application.

We have two deployments for WordPress app. One is in the Local Zone, with nodeAffinity requires topology.kubernetes.io/zone in the Local Zone us-east-1-bos-1. Another deployment has NotIn operator, so that the pods launch in the Region. Modify the value of variable WORDPRESS_DB_HOST to be the private IP of your DB instance in the output of step 4.

For the shared storage, enter the volumeHandle with the Amazon EFS ID and Amazon EFS AccessPoint ID, in the output of step 3.

For the ingress in the Local Zone, we define the value of alb.ingress.kubernetes.io/subnets to be the public subnet ID in the Local Zone, in the terraform output of step 1. For the ingress in the region, we use the AWS Load Balancer Controller to discover public subnets using tags. Configure annotation external-dns.alpha.kubernetes.io/hostname to allow External DNS Controller to register ALB to Amazon Route 53 automatically. We use Amazon Certificate Manager (ACM) and bind it to the ALB for HTTPS listener. If you haven’t an existing ACM certificate, please refer to the AWS ACM documentation- Request a public certificate using the Console.

For the Ingress to register an Amazon Route 53 record in the hosted zone and attach an ACM certificate.

After the resources are created, open the web browser to open WordPress website, and start the initial setup. After the setup is completed, go to https://demo.lindarren.com/ to ensure the WordPress is running.

After the installation are completed, the final step is starting the AWS DMS replication task. Go to AWS DMS Console, find Endpoints > Source Connections, and run test if it failed before.

Use the commands below (or use the AWS DMS’ Console) to start or resume the replication.

Check the AWS DMS Console and find the tables are being replicated from MariaDB Instance to Amazon RDS. 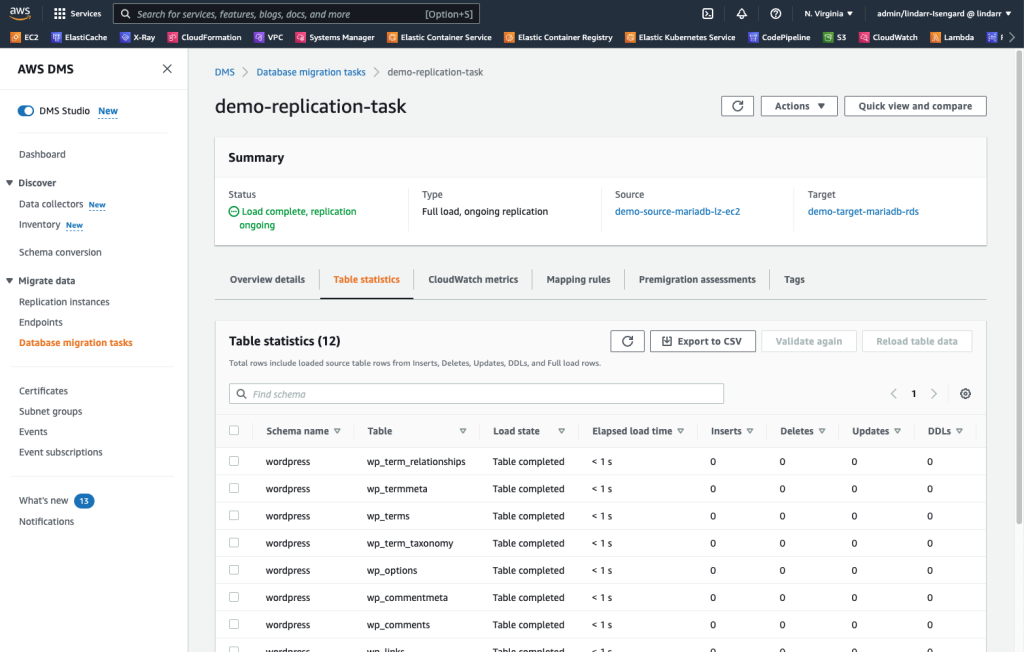 Check the Amazon Route 53 Console. The Health Checks should show that both primary site and backup site are healthy. The domain is now resolved to ALB in the Local Zone. You can use dig commands to verify the DNS resolution.

Now we are going to simulate some failure on the pods in the Local Zone, and failover to the backup site in the Region. Run the commands below to disrupt the Kubernetes deployment in the Local Zone.

Wait for a few minutes, and you can find the Amazon Route 53 Health Checks saying that the primary site is unhealthy.

Now run dig to resolve the domain. We are still able to open the WordPress website since the ALB, so the Amazon EC2 worker nodes, (not including database at the moment) tier are directed to the resources in the AZ when the Local Zone is not healthy.

In the post, the database failover is performed at the application level, but can be implemented with a Kubernetes service or a custom domain in the future. To switch from DB Instance to Amazon RDS, we change the database connection endpoints in the Kubernetes Deployment and restart the deployment. Get the secret name from kubectl get secret and put the secret name in the environment variable of the wordpress-backup deployment.

After performing the command, you can try to connect to the WordPress website and confirm that the website is still working.

Step 8. Destroy All the Resources

After playing with the demo application around, destroy all of the resources using the command below to save costs:

The goal of this post was to show how to architect an application using Amazon EKS on a Local Zone with a failover strategy.

We showed you how to:

Hopefully, you will be able to follow along with this post and are now equipped to build applications for your projects on a Local Zone. For more details, check out the documentation links below. Happy building!