Kubernetes, an open-source container management system, has surged in popularity and adoption in the past several years. From startups to large established enterprises across industry verticals are rapidly adopting it for their mission critical tasks and workloads. It is declarative, open source, and highly pluggable.

What is Amazon EKS?

Amazon Elastic Kubernetes Service (Amazon EKS) is a managed service that makes it easy for enterprises to run Kubernetes on AWS without needing to install and operate their own Kubernetes cluster. It runs upstream Kubernetes and is a certified Kubernetes conformant. The EKS control plane is highly scalable and available, deployed across multiple Availability Zones, and fully managed by AWS. EKS automatically detects and replaces unhealthy instances, scales them based on load, provides automated version updates and patching for the cluster control plane. Customers such as Intel, Snap, Intuit, GoDaddy, and Autodesk trust EKS to run their most sensitive and mission-critical applications.

It’s straightforward to get going with Amazon EKS:

3. When your cluster is ready, you can configure and use your favorite Kubernetes tools “kubectl” to communicate with the cluster.

4. Deploy and manage your workloads on your new Amazon EKS cluster the same way that you would with any other Kubernetes environment.

Bottlerocket is a Linux-based open-source operating system that is purpose-built by Amazon Web Services to run containers. You can deploy Bottlerocket on virtual machines or bare metal hosts. It includes only the essential software to run containers, which improves resource usage, reduces the attack surface, and improves the availability of deployments. It is now generally available at no cost as an Amazon Machine Image (AMI) for Amazon Elastic Compute Cloud (EC2).

So why Bottlerocket why not existing general-purpose operating systems?

In the past, managing IT infrastructure was a hard job. System administrators had to manually manage and configure all of the hardware and software that was needed for the applications to run. However, in recent years, things have changed significantly. Infrastructure as Code tools like AWS CloudFormation and Terraform have transformed the way organizations maintain IT infrastructure.

Similar to AWS CloudFormation, Terraform can be used for building, changing, and versioning infrastructure safely and efficiently. Customers can use either one depending upon their use case and requirements.

Through Terraform, you can describe the components needed to run a single application or your entire datacenter in configuration files and let Terraform generates an execution plan describing what it will do to reach the desired state and then executes it to build the described infrastructure. As the configuration changes, Terraform detects and determines what changed and creates incremental execution plans which can be applied.

By default, instances in a managed node group use the latest version of the Amazon EKS optimized Amazon Linux 2 AMI for its data plane. You can choose between standard and GPU variants of the Amazon EKS optimized Amazon Linux 2 AMI. At this point, Bottlerocket is not natively supported as a built-in OS choice for managed node groups though, in the future, it will be. Until then, this post and Terraform scripts should provide a reliable set of steps to build a managed node group with Bottlerocket nodes using launch templates.

Alright, now we have a good understanding of everything we’ll be using today in this blog post. So let’s get our hands dirty and dive in to create an EKS cluster with Bottlerocket managed node group through Terraform. 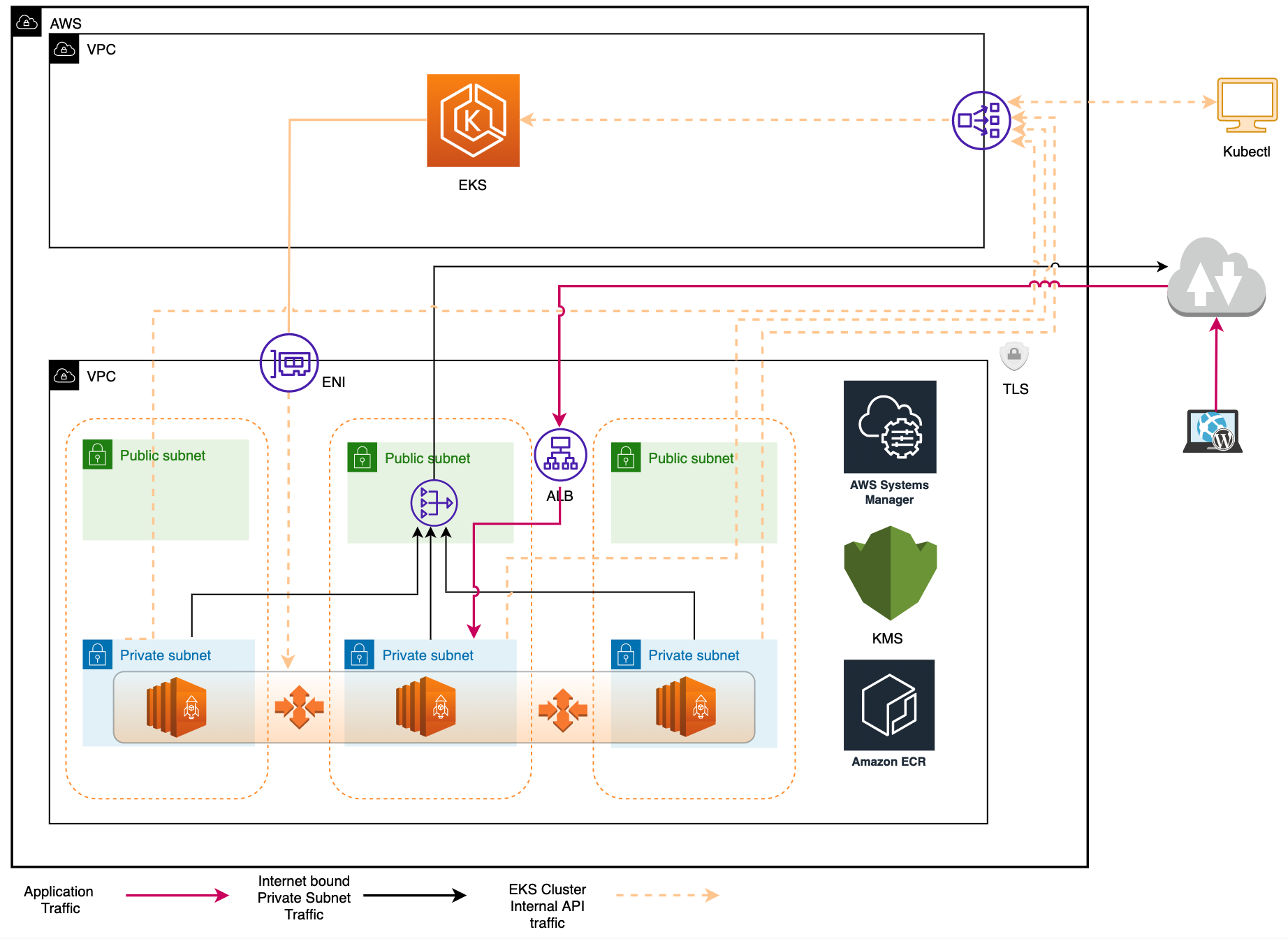 Step 1: Create a Terraform workspace directory and clone the repo

To set up your workspace and get started with this post, open your favorite terminal in your Mac/Linux workstation,

This file contains the information’s about the provider you’ll be using with Terraform. As shown above, by provider “aws”, we are instructing Terraform that we want to use AWS as a provider to create all the resources. We will pass the region name through a variable than hardcoding it. Since every script in this blog post is parametrized, you won’t need to change them. All the variables with their default values are stored in separate files.

After the initial workspace setup, we are ready to create VPC and subnets for our worker’s nodes. We need these resources while creating the EKS cluster. Amazon EKS requires subnets in at least two AZs. You can use the existing VPC ONLY when it meets Amazon EKS specific requirements. In our current blog setup, we will create a separate VPC and use three AZ’s with both public and private subnets.

A subnet is public or private depending on whether or not traffic within the subnet is routed through the internet gateway. If the subnet’s traffic does not have a default route through an internet gateway, that subnet is considered to be private. Public subnets will be used for public-facing resources like load balancers, which will direct external traffic to pods running on the worker nodes in private subnets. We will also enable DNS hostname and DNS resolution support otherwise our worker will fail to register with the cluster.

The VPC configuration for our post includes the following:

To set up VPC, run the following commands:

vpc.tf and “subnet.tf” both are scripts that will create network resources in AWS. For configuration, they will refer to variables and their values from vpc_variables.tf, you can override the default values with custom using this file.

For example, you can change the value of “name” variable from “eks-bottlerocket-imnr” to something different and cidr_block to your custom cidr (172.0.0.0/16). 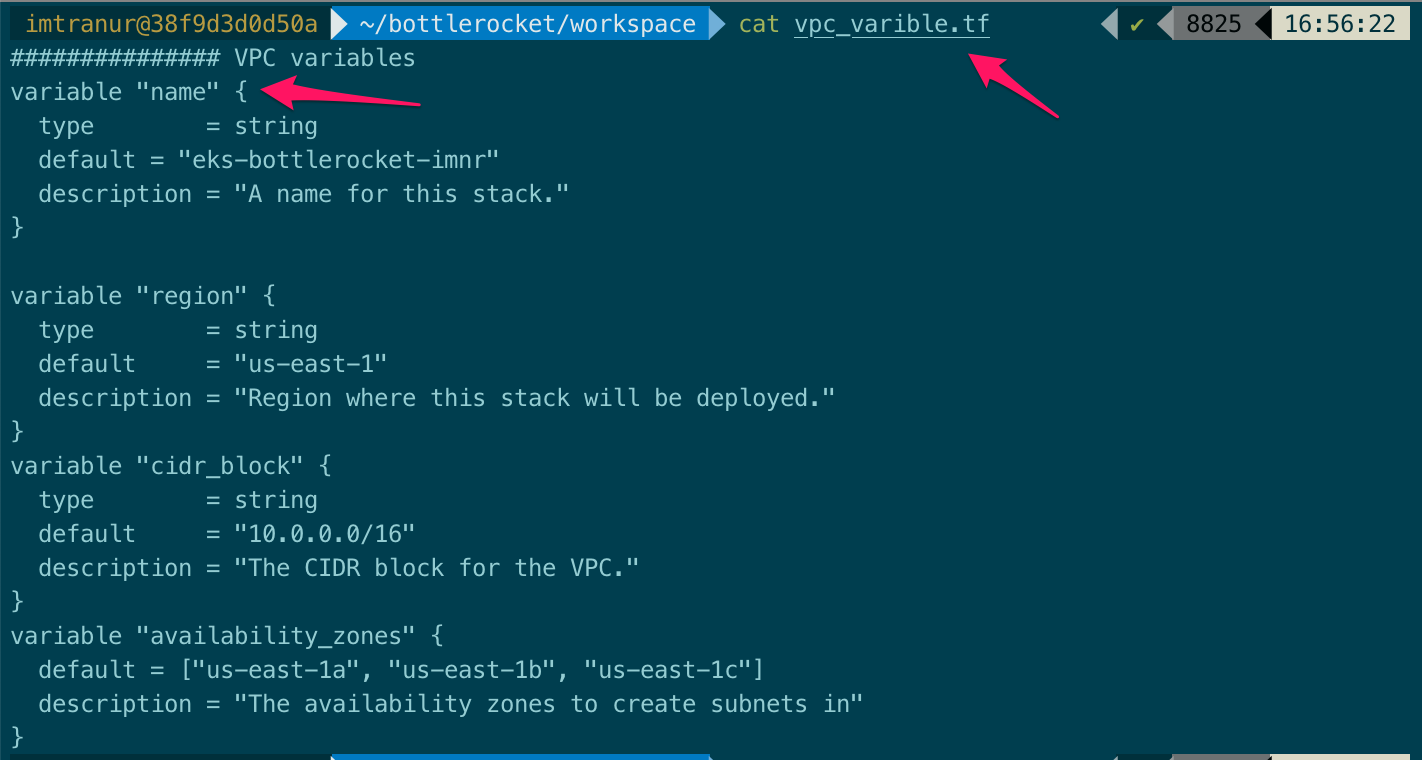 Once you successfully run these three commands you should see output as seen in the following figure. In your case, the subnet IDs and VPC IDs could be different. 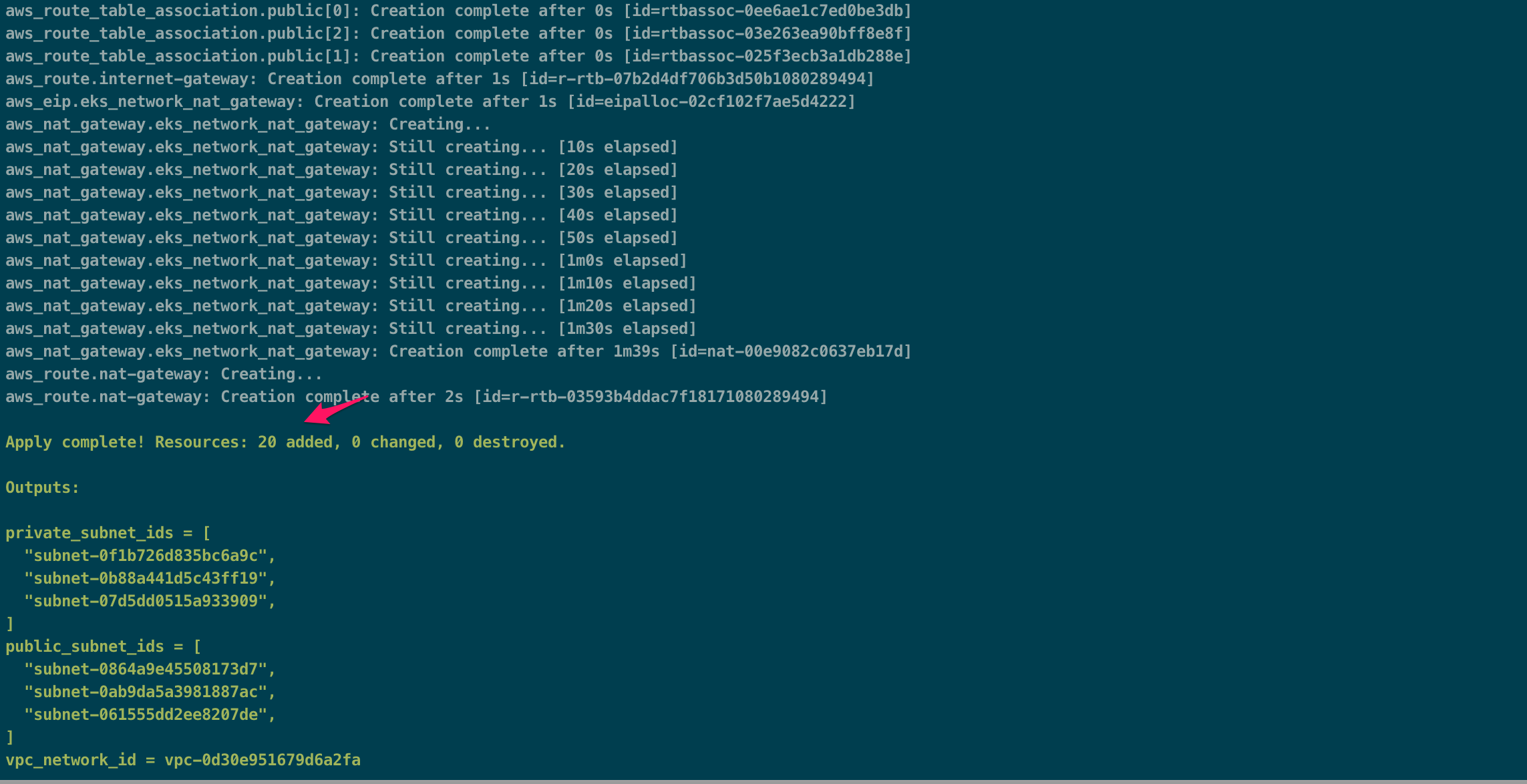 Step 3: Set up IAM role for the EKS cluster and managed worker node

After our networking stack is created, we can move on to creating the IAM role for the EKS. A Kubernetes cluster managed by Amazon makes calls to other AWS services on our behalf for resource management. Hence, it is very important to ensure that the IAM role with proper permissions gets created before cluster setup, otherwise, the cluster won’t work properly.

Similar to the cluster, the EKS worker nodes kubelet daemon makes calls to AWS APIs on our behalf. Nodes receive permissions for these API calls through an IAM instance profile and associated policies. So we need to create an IAM role for worker nodes before registering them with the cluster.

We will create two roles :

To set up IAM, run the following commands :

We’ll use iam_role.tf script to create both IAM roles in AWS. For their configuration, this script will refer to variables and their values from iam_variables.tf. The name of the first role is EKS-${var.name}-cluster-role, here ${var.name} is a way in terraform to do variable interpolation. We are going to use the value from the “iam_variables.tf“, You can override the default values with custom through this file.

To check what is in the role file, open iam_role.tf file in your favorite editor:

To execute the IAM script run below commands :

Once you successfully run the above two commands, you should see output like this:

The next step is to create an EKS cluster. Amazon EKS cluster consists of two primary components:

In this step, we are only going to create an Amazon EKS control plane that will run the Kubernetes components, such as etcd and the Kubernetes API server.

To set up an Amazon EKS cluster, run the below commands :

Once you successfully run the above two commands, you should see cluster name and endpoint in your output as shown below. 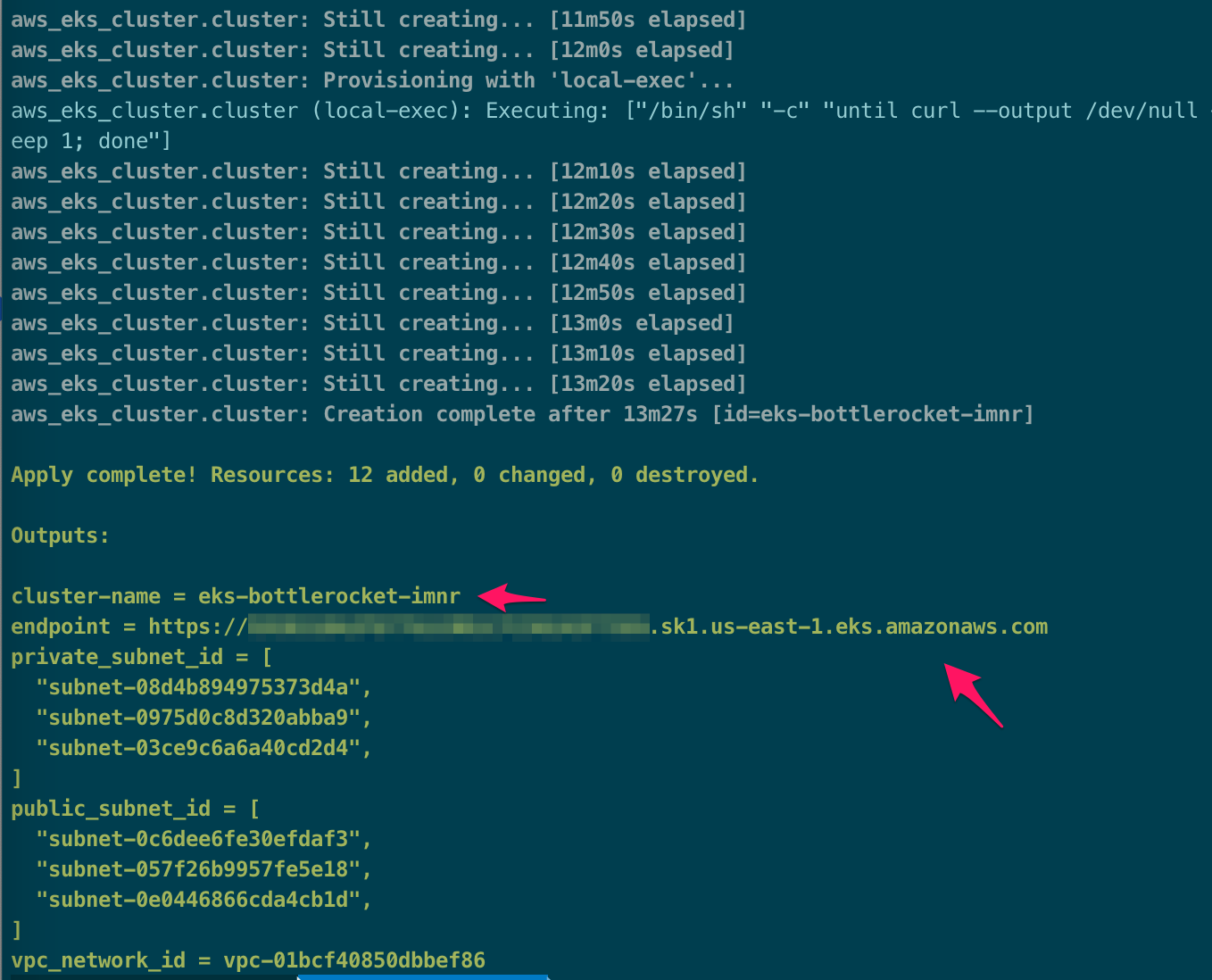 We can now verify the new cluster in our AWS account: 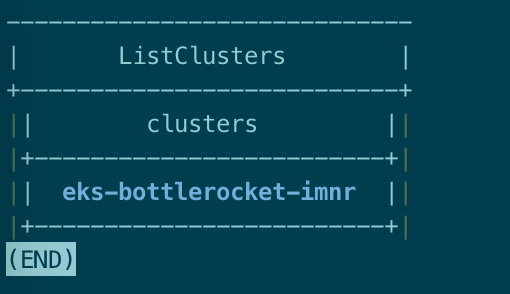 Step 5: Create a launch template for the managed node group

To set up the launch template, run the following commands:

Once you successfully run the above three commands you should see launch template name in your output as shown below. 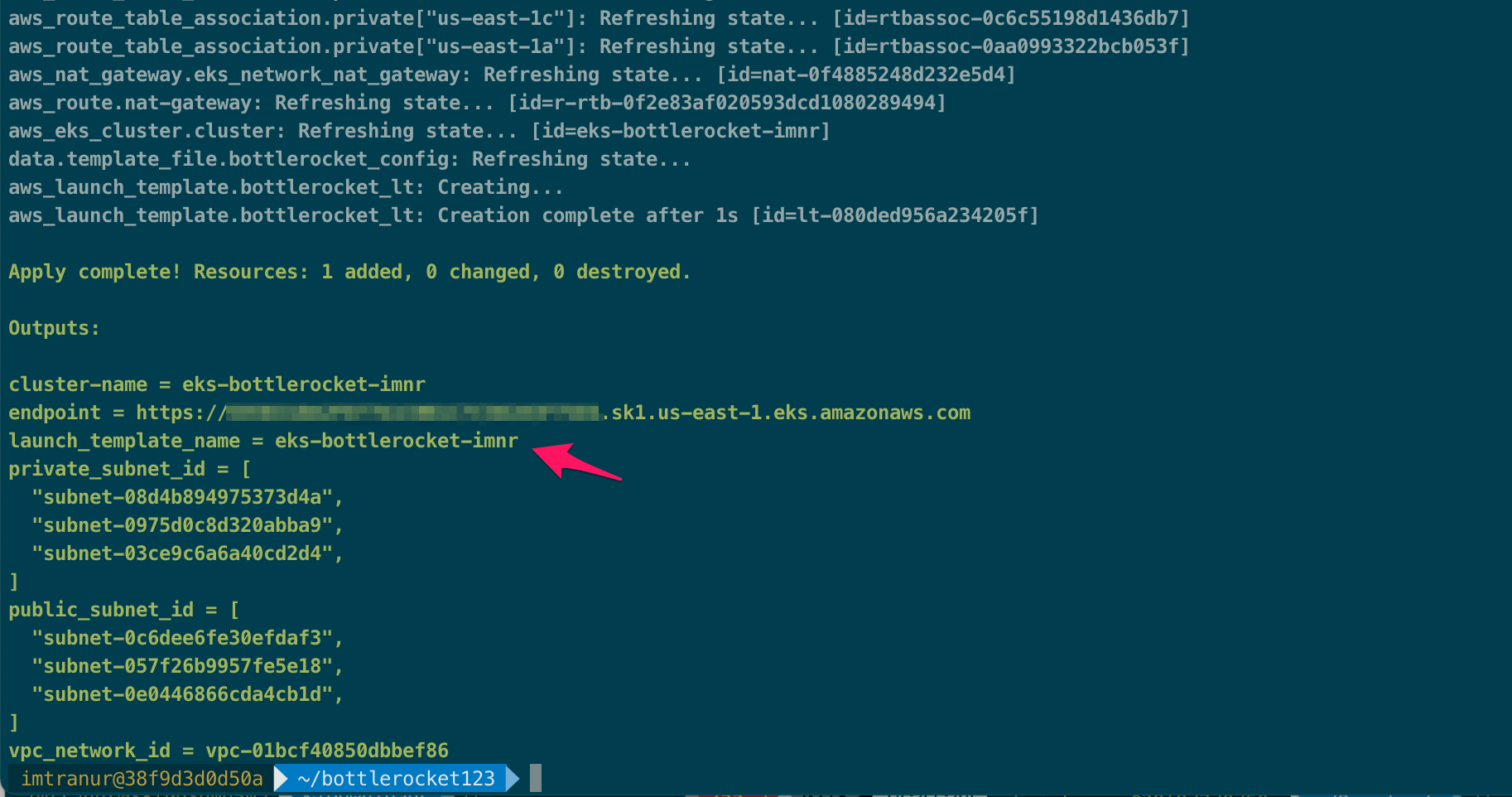 Step 6: Create a EKS config map for managed node to join to the cluster

To generate a config map manifest and apply it to cluster run the following commands:

Once you successfully run the above three commands you should see output as shown below. 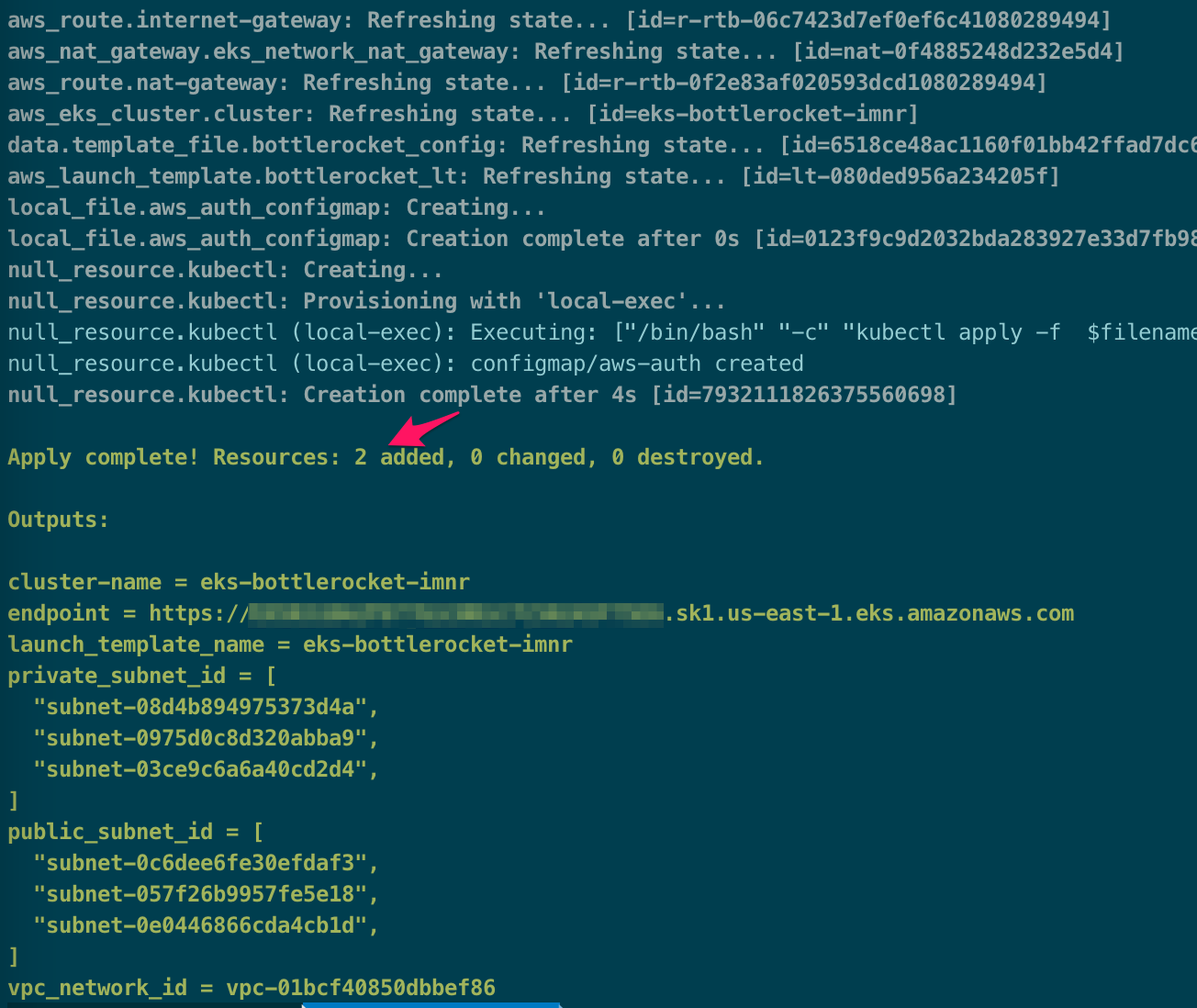 Once you successfully run the above three commands you should see a new node group named “eks-bottlerocket-imnr-mng-worker-####” in your cluster with minimum and desired node count as 3 and maximum node count as 5 as shown below. 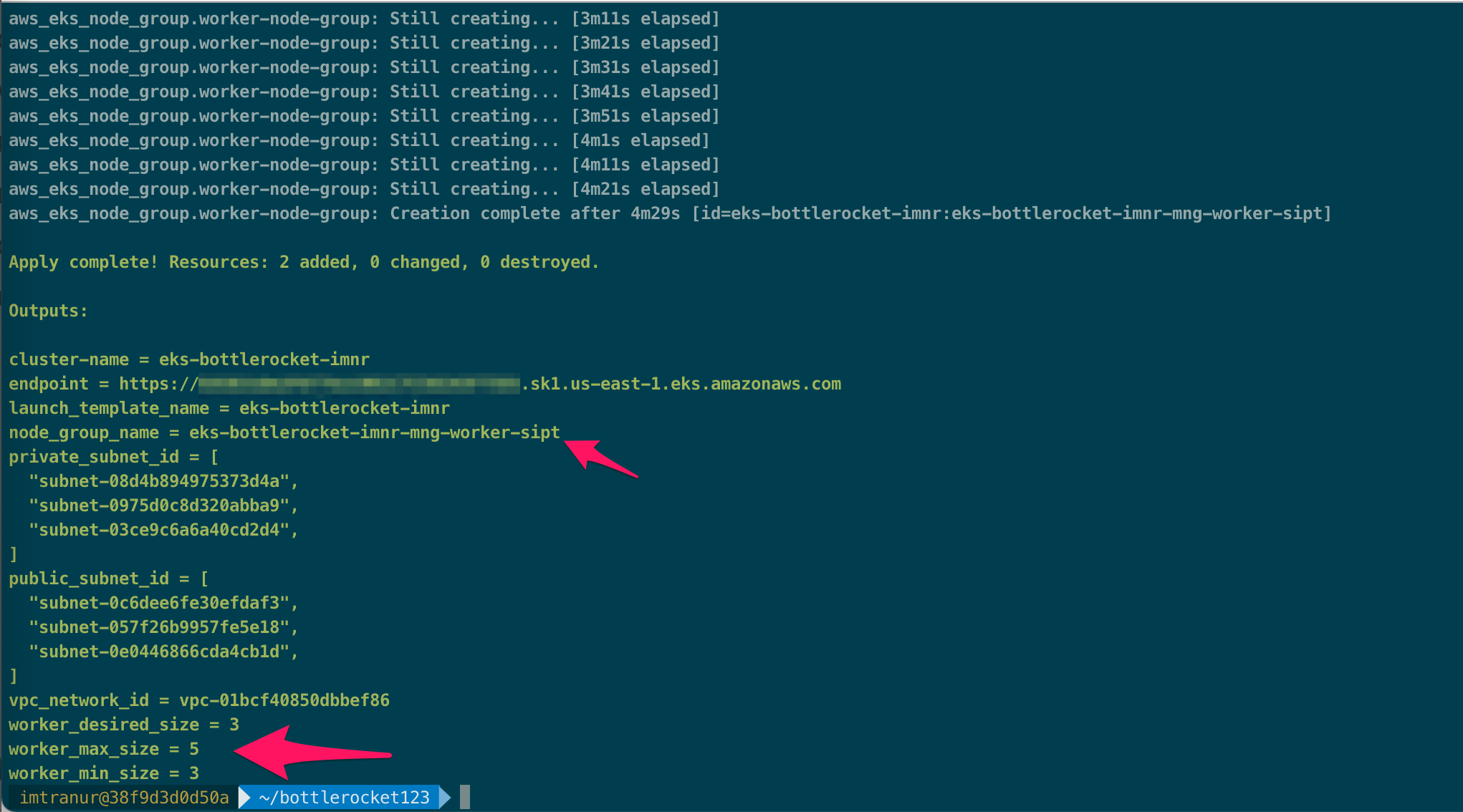 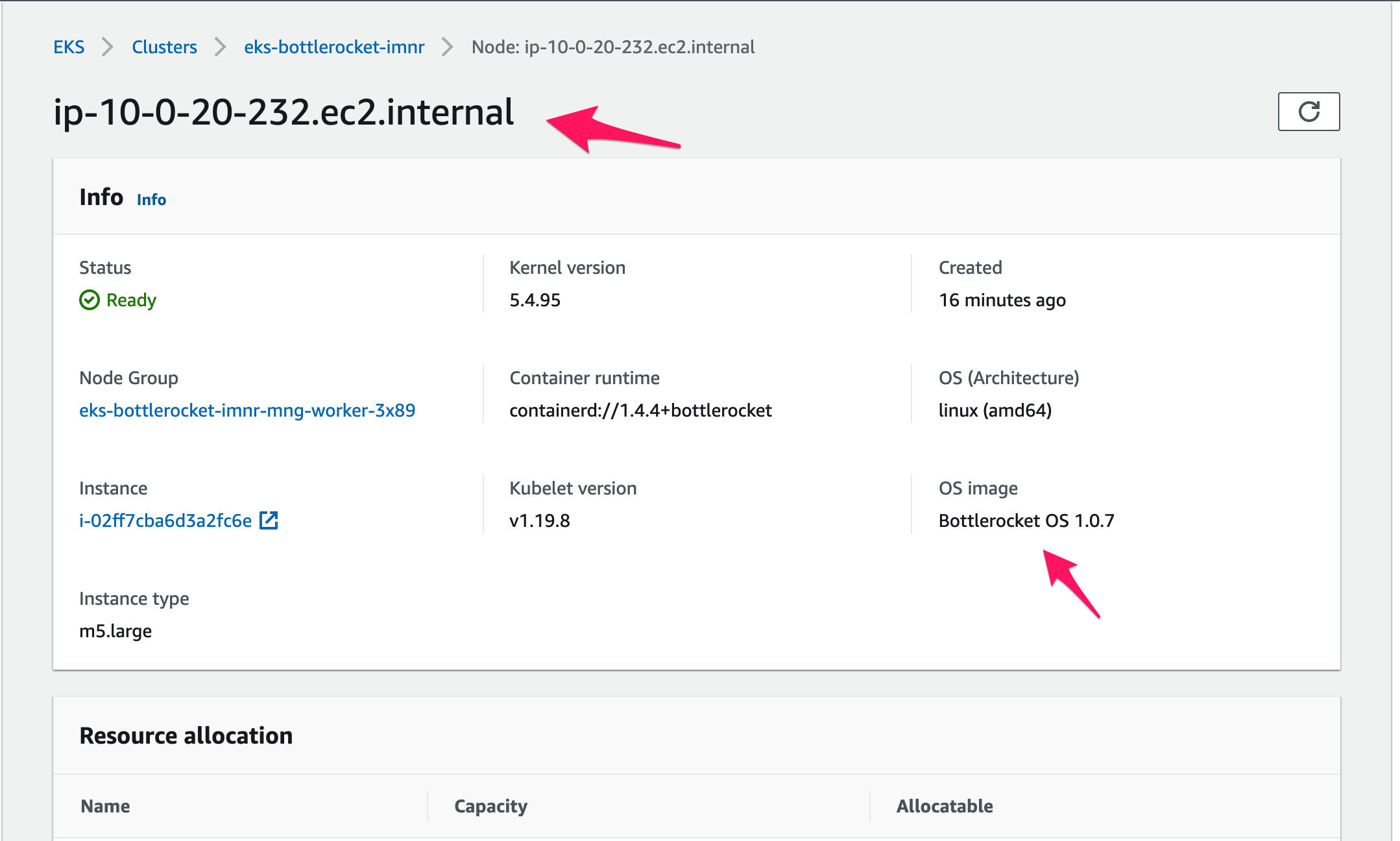 Step 8 : Deploy a sample application and validate the setup.

The next step is to deploy an application and see if our EKS cluster using Bottlerocket managed node groups is working as expected.

Copy the LoadBalancer name from the terminal and access it through any web browser. You should see a page as shown below: 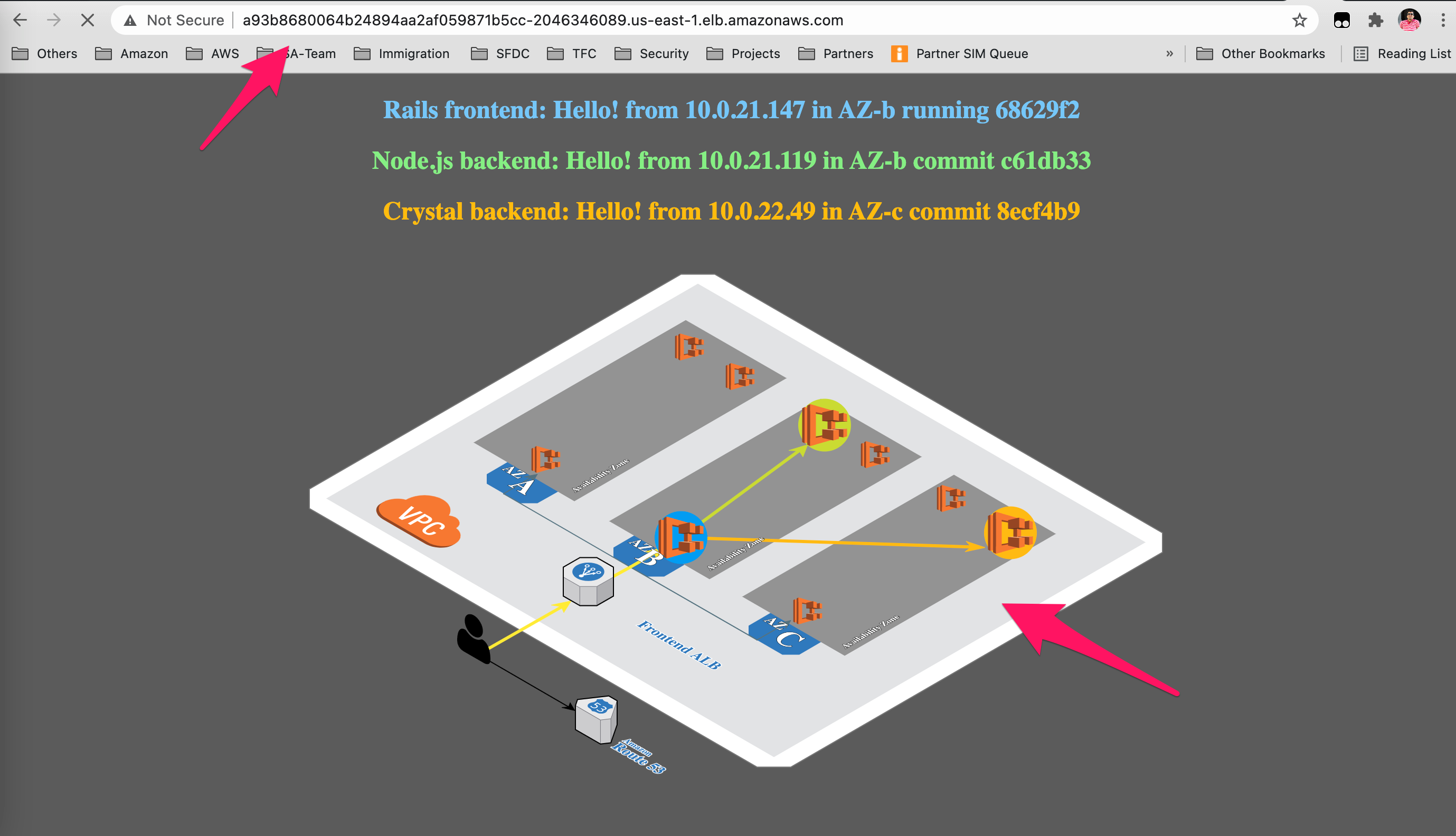 The above page validates that our application has been successfully deployed on Amazon EKS on a managed node group with the Bottlerocket operating system.

Please take extra precaution while running this command, this will wipe out everything. So please ensure you are inside the directory you created in Step 1 and then run this.

In this post, we outlined how to create an EKS cluster, Bottlerocket managed node group using Terraform, and then deployed a sample application to validate the setup.

Finally, rather than deploying each component sequentially we can deploy entire EKS stack (except the application) using one single terraform command. To do so, follow below steps: