As customers migrate ASP.NET (on .NET Framework) applications to AWS, many choose to deploy these apps with AWS Elastic Beanstalk, which provides a managed .NET platform to deploy, scale, and update the apps. Customers often ask how to create CI/CD pipelines for these ASP.NET 4.x (.NET Framework) apps without needing to set up or manage Jenkins instances or other infrastructure.

You can easily create these pipelines using AWS CodePipeline as the orchestrator, AWS CodeBuild for performing builds, and AWS CodeCommit, GitHub, or other systems for source control. This blog post demonstrates how to set up a simplified CI/CD pipeline that you could expand on later to include unit tests, using a CodeCommit Git repository for source control.

Creating a project and adding a buildspec.yml file

The first step in setting up this simplified CI/CD pipeline is to create a project and add a buildspec.yml file.

First, either create a new ASP.NET Web Application (.NET Framework) project or choose an existing application to use. You can choose MVC, Web API, or even Web Forms project types based on ASP.NET 4.x. Whichever type you choose, make sure it builds and runs locally.

To set up your first CodePipeline for an ASP.NET (.NET Framework) application, you may wish to use a simple app that doesn’t require databases or other resources and which consists of a single project. The following screenshot shows the project type to choose when you create a new project in Visual Studio 2019. 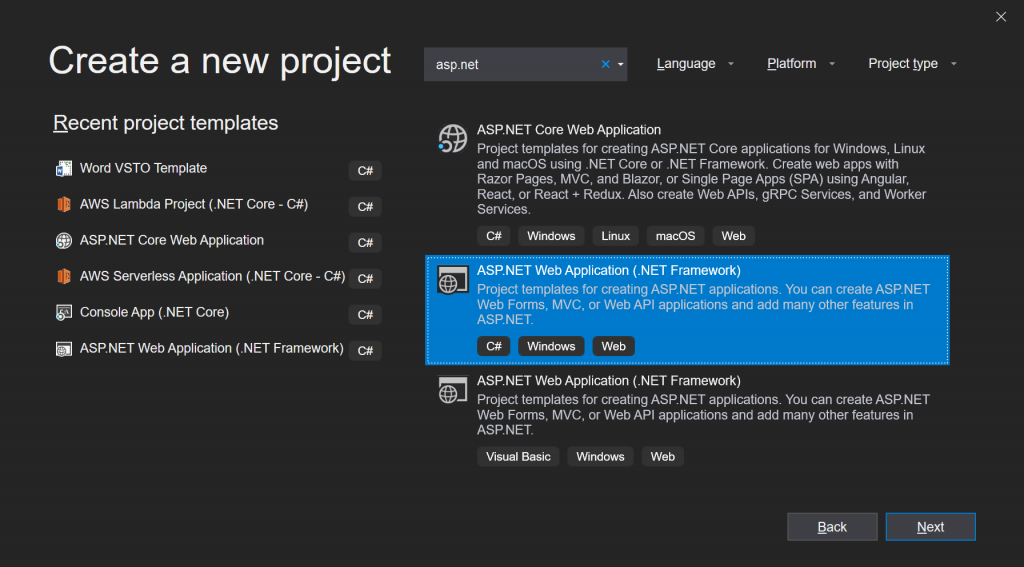 Adding the project to CodeCommit

If you wish to use Team Explorer to create and interact with the CodeCommit Git repository for your project, follow Step 2 in the Integrate Visual Studio with AWS CodeCommit documentation to create the connection, and then follow the steps under Create a CodeCommit Repository from Visual Studio in the same section. Alternatively, you can work with Git from the command line.

You can reduce the number of files being stored in Git by adding a .gitignore file specific to .NET projects using Visual Studio’s Team Explorer: 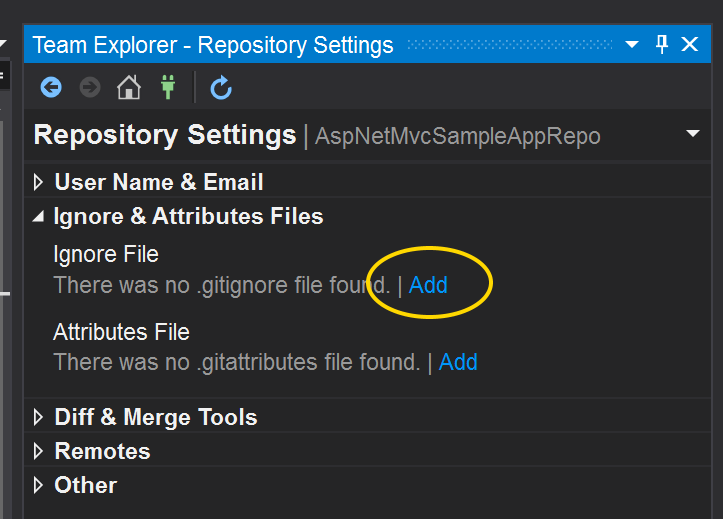 After adding a .gitignore file and optionally connecting Visual Studio to CodeCommit, push your code up to the remote in CodeCommit using either git push or Team Explorer. After pushing your changes, you can use the CodeCommit management console in your browser to verify that all your files are there.

Adding a buildspec.yml file to your project

CodeBuild, which does the actual compilation, essentially launches a container using a docker image you specify, then runs a series of commands to install any required software and perform the actual build or tests that you want. Finally, it takes whatever output files you specify—artifacts—and uploads them in a .zip file to Amazon S3 for the next stage of the CodePipeline pipeline. The commands that CodeBuild executes in the container are specified in a buildspec.yml file, which is part of the source code of your project. You can also add it directly to the CodeBuild configuration, but it’s more convenient to edit and track in source control. When running CodeBuild with Windows containers, the default shell for these commands is PowerShell.

Add a plain text file to the root of your ASP.NET project named buildspec.yml and then open the file in an editor. Ensure you add the file to your project to easily find and edit it later. For details on the structure and contents of buildspec.yml files, refer to the CodeBuild documentation.

You can use the following sample buildspec.yml file and simply replace the values for PROJECT and DOTNET_FRAMEWORK with the name and .NET Framework target version for your project.

Walkthrough of the buildspec commands

Looking at the buildspec.yml file above, you can see that the only phase defined for this sample application is build. If you need to perform some action either before or after the build, you can add pre_build and post_build phases.

The first command executed in the build phase is nuget restore to download any NuGet packages your project references. Then, MS build kicks off the build itself. Using the /t:Package parameter generates the web deployment folder structure that Elastic Beanstalk expects for ASP.NET Framework applications, and includes the archive.xml, parameters.xml, and systemInfo.xml files.

By default, the output of this type of build is a .zip file. However, when used in conjunction with CodePipeline, CodeBuild always zips up the artifact files that you specify, even if they’re already zipped. To avoid this double zipping, use the /p:PackageAsSingleFile=false parameter, which outputs the folder structure in a folder called Archive instead. The /p:OutDir parameter specifies where MSBuild should write the files. This example uses C:\codebuild\artifacts\.

Finally, in the artifacts node, specify which files (or artifacts) CodeBuild should compress and provide to CodePipeline. The sample above includes all the files (the ‘**/*’) in the C:\codebuild\artifacts\_PublishedWebsites\${env:PROJECT}_Package\Archive\ folder, in which ${env:PROJECT} is automatically replaced by the value of the variable for the project name specified at the top of the file.

After you finish editing the buildspec.yml file, commit and push your changes to ensure the file is in your CodeCommit Git repository.

Once it’s installed, open your project in Visual Studio, right-click the project node in the Solutions Explorer pane, and choose Publish to AWS Elastic Beanstalk. This launches the publish wizard.

Once the publish wizard has finished deploying to Elastic Beanstalk, you should see the URL in the Elastic Beanstalk environment pane in Visual Studio, as shown in the following screenshot.

Next, create the CodePipeline pipeline.

Now that your source code is in CodeCommit, and you have an existing Elastic Beanstalk app, create your pipeline:

Next, create the build stage:

Next, choose a group name for Amazon CloudWatch logs under Logs (near the bottom of the page). This will output detailed build logs for each build to CloudWatch. Leave the rest of the settings as they are.

Then choose Continue to CodePipeline to save the CodeBuild configuration and return to the CodePipeline wizard’s Add build stage step. Ensure your newly created build project is specified in Project name, then choose Next.

In the Add deploy stage step:

Testing out the pipeline

To test out your pipeline, make an easily visible change to your application’s code, such as adding some text to the home page. Then, commit your changes and push.

Within a few moments, the Source stage in your pipeline should move to in progress, followed by the Build stage. It can take 10 minutes or more for the build stage to complete, and then the Deploy stage should finish quickly.

Select the environment to which you’re deploying and select the URL. You should see that your changes are now live.

After a successful build and deploy, your pipeline should appear as it does in the following screenshot. 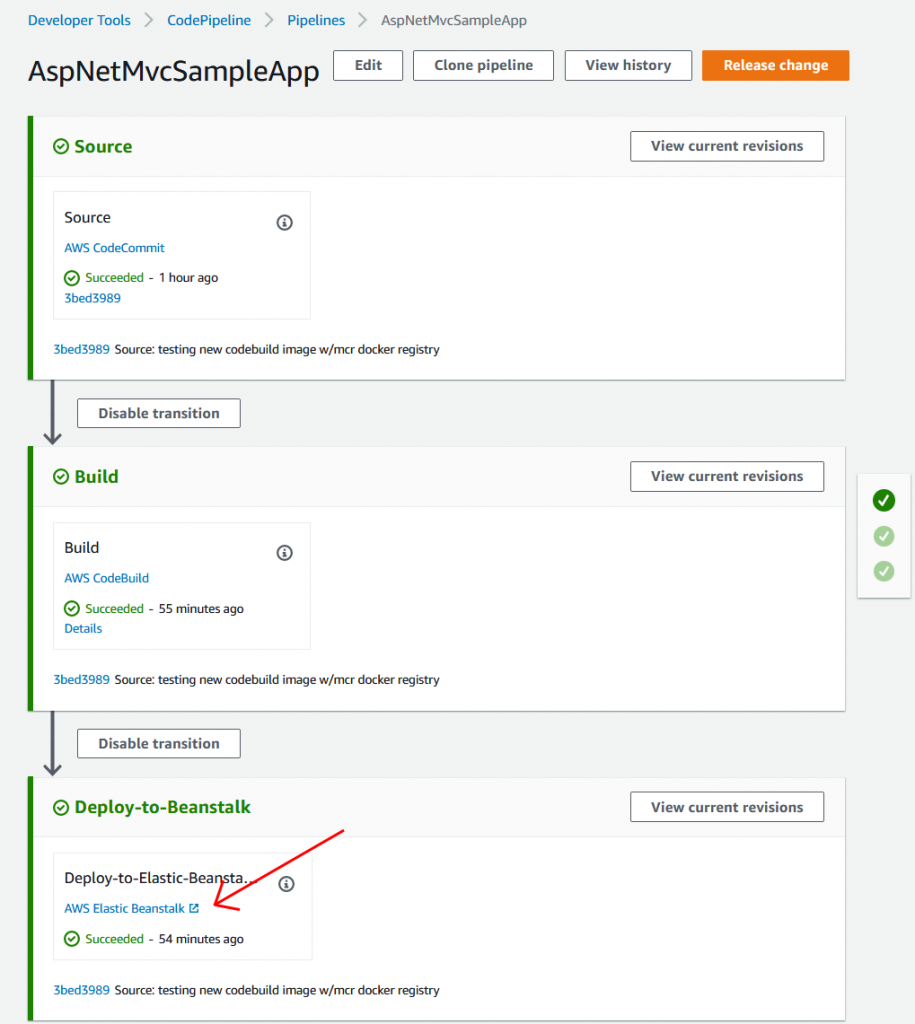 In this blog post, I showed you how to create a simple CI/CD pipeline for ASP.NET 4.x web applications, built with the .NET Framework, using AWS services including CodeCommit, CodePipeline, CodeBuild and Elastic Beanstalk. You can extend this pipeline with additional build actions for things like unit tests, or by adding manual approval steps.

We welcome your feedback.