Connect Your Technology and Business Strategies with These Two Frameworks 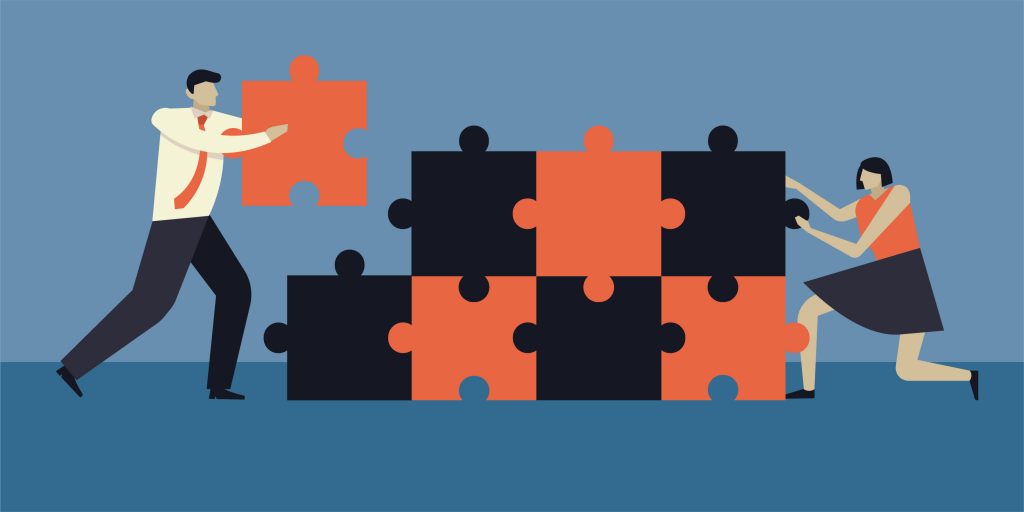 Enterprises working with AWS to modernize their IT infrastructure often do so within the larger scope of a digital transformation. These transformations look to go beyond technology, including goals to address the changes to teams, process, and culture that are required to enable the enterprise to move faster and with more agility. The enterprise leaders we speak with recognize this multi-faceted challenge. In addition to leveraging new technology frameworks like the cloud, they are also looking for different IT operating models that will help them align their teams and initiatives to business outcomes.

The two frameworks that I favor the most for integrating technology and business strategy have compelling track records of success for the companies that have employed them, and I have seen personal success with these frameworks in my prior roles as a CIO, COO, and CDO, where I sought to put technology capabilities at the center of our strategy development and execution.

The first is Roger Martin’s integrated choices framework, which is codified in his book Playing to Win. I had the opportunity to work with and learn from Roger for several years, and the most appealing aspect of his method for CIOs is that the capabilities and systems (technology and processes) required to execute the enterprise’s big idea are integrated into the consideration and validation of a new strategy.

The second is the objectives and key results (OKR) goal framework used by Andy Grove at Intel and later popularized by one of his former engineers, John Doerr, now the Chairman of legendary Silicon Valley venture firm Kleiner Perkins. Goals defined by OKRs can not only create cascading alignment of the company’s priorities throughout business and technology teams, but their cadence encourages breaking up work into smaller units for more frequent value delivery.

Done right, both frameworks create an environment for the constant testing and challenging of the ideas and assumptions in your strategy.

I asked my friend Matthew May, strategy advisor and bestselling author of The Elegant Solution: Toyota’s Formula for Innovation, to share below how he works with senior executives to implement strategy and accountability in their organizations by combining these two frameworks.

OKRs: The Magic of Strategy Deployment

“So you’re passionate? How passionate? What actions does your passion lead you to do? If the heart doesn’t find perfect rhyme with the head, then your passion means nothing. The OKR framework cultivates the madness, the chemistry contained inside it. It gives us an environment for risk, trust, where failing is not a fireable offense. And when you have that sort of structure and environment, and the right people, magic is around the corner.”
—Bono, U2

As a strategy and innovation advisor, I spend a good bit of time working with senior leadership teams facilitating sessions focused on answering five basic questions:

This is the now well-known strategic choice-making framework known as “Playing to Win,” which was developed by Roger Martin and presented in his book of the same name. Over the past five years, the framework has taken root in many of the world’s most winning businesses for the basic reason that it is a simple and effective way to grasp a concept that many find either daunting or painful, or both: strategy.

In this view, strategy is defined not so much as an analysis or plan, but rather a cascade of tightly integrated choices that uniquely positions a player to create sustainable advantage and superior value relative to the competition.

Done right, strategy defined this way at the enterprise level should cascade down through the organization to divisions, business units, functions, teams, and—ideally—individuals. Having the entire organization conceptually aligned to key choices is a powerful step toward dominating a given playing space.

At some point, though, strategy developers must turn their attention to a sixth and differentiating question: How will we effectively deploy our strategy? In other words, they must act on their choices.

All too often, I see companies so excited by their shiny new strategy and itching to get going that they immediately dive into projects and workstreams. And all too often I see the original focus become diluted by the shotgun approach to deployment. That presents a real problem, and leaves leaders scratching their heads wondering what went wrong.

The answer is that in their well-meaning enthusiasm, they left out a basic yet critical step: setting goals that provide measurable milestones and deliver concrete results that enable them to know whether and to what degree their strategy is on course and working. These goals should cascade in the same way as the strategies they support.

Enter the concept of objectives and key results (OKRs). Now a well-known and widely adopted framework for driving progress, the acronym OKRs was coined by legendary Intel CEO Andy Grove, which he created as a means to propel execution in the mid-1970s in his role as senior engineering manager. OKRs were Grove’s take on Peter Drucker’s “management by objective.” Grove taught OKRs to those in his charge, among them a young engineer by the name of John Doerr, who after five years with Intel would go on to join Kleiner Perkins, a Silicon Valley venture firm which he now chairs.

In his recently released bestselling book Measure What Matters, Doerr writes that Grove explained his simple but effective perspective on management this way: “The two key phrases of the management by objective systems are the objectives and the key results, and they match the two purposes. The objective is the direction. The key results have to be measured, but at the end you can look and without any argument say, ‘Did I do that, or did I not do that?’ Yes. No. Simple. No judgments in it.”

OKRs work quite simply: Objectives are directional statements of intent, the “what.” Each objective is further defined by three to five key results, which are specific and time bound, and thus measurable. Key results are the “how.” Generally, speaking, OKRs are tied to annual goals but are set, tracked, and reviewed quarterly.

The structure of an OKR is also quite simple: 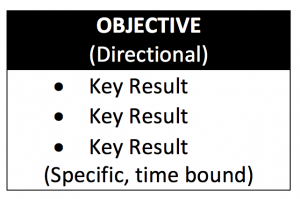 For example, the Chief Designer at ABC sets quarterly OKRs: 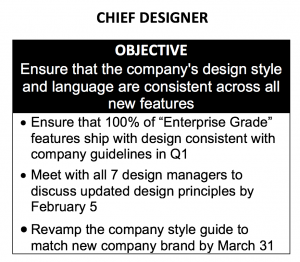 Her key results then become the objectives of the appropriate next level down. For example: 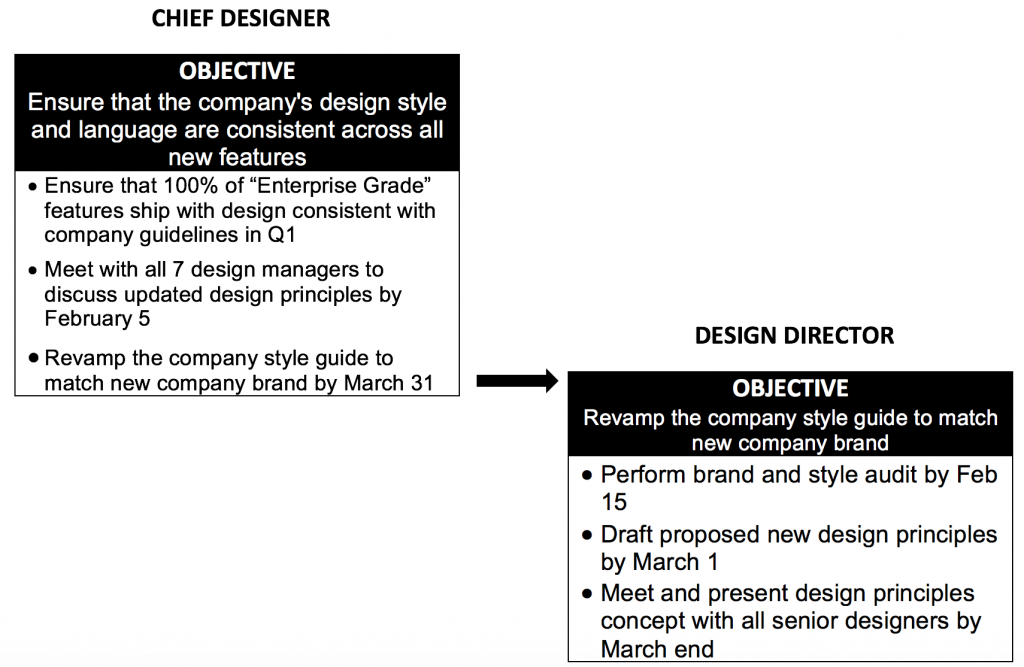 The next level down, perhaps a senior designer, then adopts the design director’s key result as his or her objective.

Like any good framework, OKRs are accessible and allow for input and interpretation from all parts of the organization, including lower levels and outer edges. But like any technique or method, when taken to an extreme or used in a manner not originally intended it will fail to produce the desired outcome. In the case of OKRs, the desired outcome is transparent alignment and engagement.

For example, used only as a loose guideline and narrowly construed as a Mad Lib for stating goals, OKRs are nothing more than a fancy and somewhat intelligent to-do list, unattached to anything that truly matters other than to the individual writing them. On the other hand, taken as rigid marching orders that don’t allow lower levels to include their own objectives, OKRs will go the way of traditional performance reviews, something most professionals secretly hate and see marginal value in but have to do simply because company policy dictates they must. 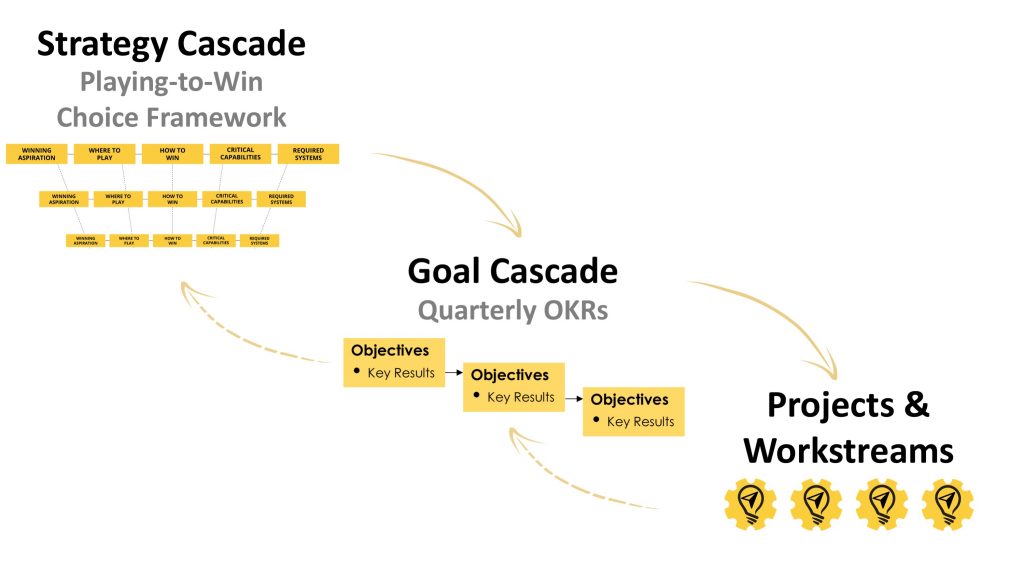 In my work, I find that OKR workshops are a fast and effective means to develop OKRs one level at a time. To make things go smoothly, I’ve created a shareable wall canvas that works well and allows cross-functional small teams to focus on their objectives and key results, and promotes transparency, engagement, and collaboration simultaneously. 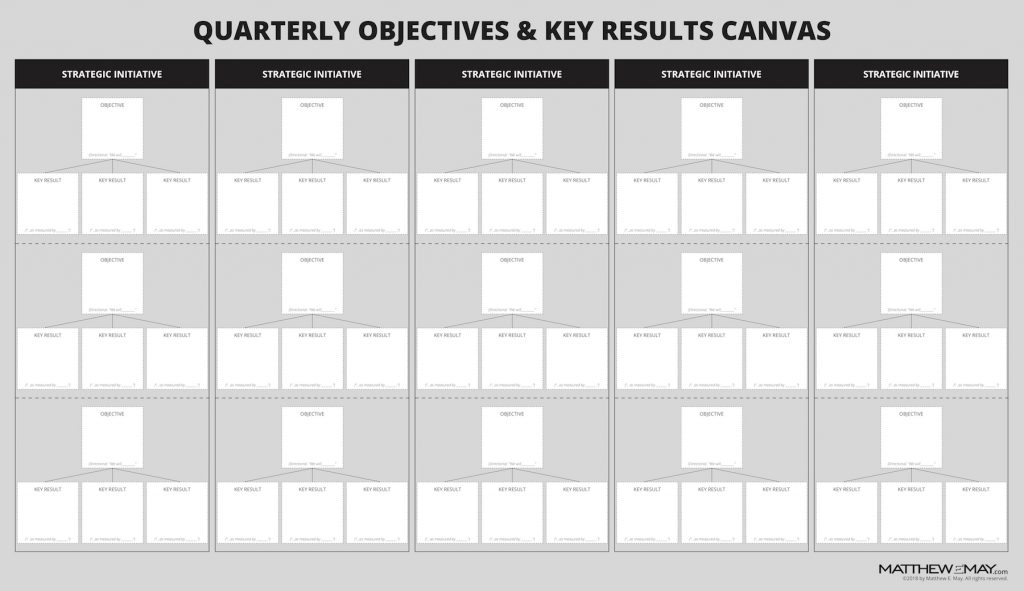 Ideally, the outcome of an OKR session should be shared openly, adjusted based on feedback, and fed into an easy-to-use system to track and communicate visual progress toward completion. Such a system does not need to be super sophisticated or even digital.

The Magic of “Stretch” OKRs

When used correctly, OKRs can produce remarkable transformation that indeed seems like magic. I witnessed as much during my tenure as a strategy advisor to Toyota, which accomplished a seemingly impossible mission in their parts supply chain operation.

A newly appointed division president set a three-part stretch goal for the $2 billion unit. She believed the organization was good but could be great. Her objective was to rethink and transform the entire supply chain operation into what she considered was a world class operation in terms of agility and innovation. She set three key results: reduce operating costs by $100 million, remove $100 million of inventory from the supply chain, and achieve a 50% improvement in customer service ratings by Toyota’s dealers. She stunned her senior leadership team by telling them she wanted these goals met in three years.

To call these stretch goals would be an understatement.

Cries of “Impossible!” rang out. (Note: when setting goals meant to drive new thinking, getting people out of their comfort zone is critical. In other words, initial cries of impossibility are generally a good thing.)

But the division president, confident in her senior leadership team, would not compromise. She knew that lowering her ambition would only lead to working harder or longer, not smarter, and certainly not more innovatively. She challenged her team to put their heads together to figure it out.

They did, by working collaboratively and horizontally across functions. The senior leaders arrived at ten objectives that needed to be met in order to accomplish the president’s key results:

Such high bars had never been attempted in the division. But the more aggressive targets actually engaged people’s brains in new ways, forcing them to rethink and redesign processes.

The magic was in a hidden dimension to how the OKRs were set. The ultimate mission of the initiative was to transform the entire supply chain, but there are inherent conflicts that exist between and among the various natural functions of any supply chain. The real art of the strategy was in recognizing those tensions, calling attention to them, and capitalizing on them to power new thinking and drive collaboration.

At first glance, the list of ten objectives seems like a simple master wish list. But take a second look. See if you can spot the tension points.

If you look back at the list above, you’ll see that the ten targets are really five pairs of two conflicting goals. This simple graphic helps visualize the pairings:

Not all of the OKRs were completely met, but the organization came close enough: $90 million taken out of inventory and costs, and nearly 40% improvement in customer service. But that’s the nature of “stretch” OKRs: anything in the 70% completion range or above is considered successful. Think about it, if you accomplish 100% of your so-called stretch OKRs, how truly stretch were they?

When you’re struggling to deploy what you believe to be a solid strategy, when projects and workstreams seem oddly disconnected to the strategy, consider adopting the objective and key results framework. The transformation you’re seeking may just be a few simple steps away.

Find more from Matt on LinkedIn