Part 1 of the blog contains the following steps for use case 1 of this application: ingest IoT job metadata via a JSON file upload component and a UI application.

In this part 2 post, you will continue building the following use case 2 of this UI application at the edge.

Solution overview of use case 2

Operators need to make judgements with streaming IoT data in a near-real time fashion. The data will help operators make the right decisions if it can be shown in an interactive UI application with low latency. With this application, operators can make sound decisions on-site without delay and improve plant operation efficiency.

Please note, this dummy publisher component is used for demonstration purposes only. In the industrial plant setting, it would be replaced by a suitable industrial data connector to wind turbines (e.g. SCADA system).

The following Steps 6 to 9 will guide you through how to:

To build this UI application for use case 2, you will need to have AWS IoT Greengrass V2 and dependencies installed on the edge device, as explained in part 1. You will also need the customer UI component from part 1 to be launched on the edge device. If you haven’t completed these steps, review part 1, Step 1-5 before proceeding.

Walk- through of use case 2

The following walk through steps will provide detailed instructions on developing a UI app at the edge for real-time IoT job monitoring. Please note that this post features the key solution milestones for conciseness, but readers should visit the GitHub repository for details and source code.

1. Change the directory to components/com.example.Publisher/aws-gg-deploy in the directory where the GIT repository was cloned to the Amazon Elastic Compute Cloud (Amazon EC2) instance.

2. Modify the deployment script deploy-edge.sh by replacing the following placeholders with your customized values in _setEnv() section:

Press Ctrl-X, then press Y to save the modified deploy3-edge.sh file with the same name.

3. Run the following script to deploy this component:

You can see the log is updated with new JSON messages published at a frequency once of every 10 seconds. The message will send to an IPC topic: runscreen/topic, for the WebSocket component to subscribe to.

The WebSocket component subscribes to the IPC topic: runscreen/topic and receives messages with measurements. This component will then serve the message data via the asyncio server, so the UI can receive data from the WebSocket server.

To launch the WebSocket component:

1.Change the directory to components/com.websocketApp/aws-gg-deploy in the directory where the GIT repository was cloned to the Amazon EC2 instance.

2. Modify the deployment script deploy-edge.sh by replacing the following placeholders with your customized values in _setEnv() section:

Press Ctrl-X, then press Y to save the modified deploy3-edge.sh file with the same name.

3. Run the following script to deploy this component:

This bash script takes approximately 10 seconds to finish. Once it exists, please confirm that you have the following component created in your AWS IoT Core console: 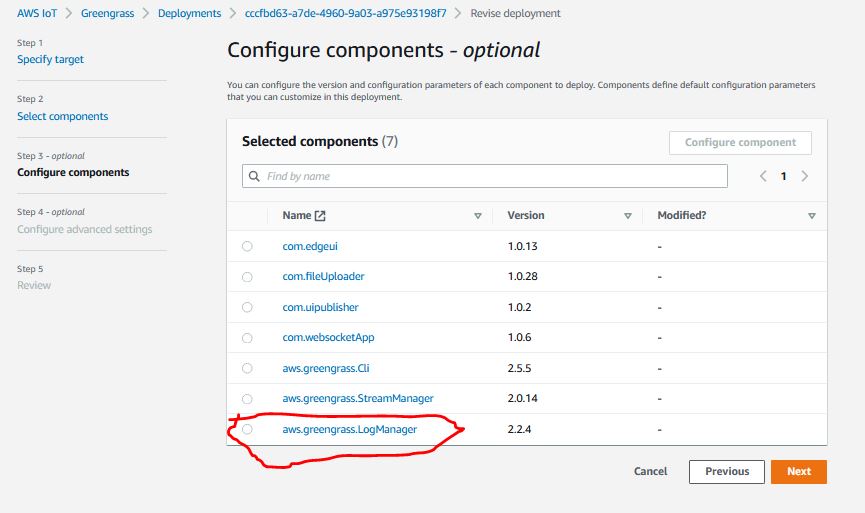 Choose the log manager component and select configure component to modify its configuration.

For more configuration modification choices, please refer to this doc.

After redeploy with the log manager, component logs can be found in the Amazon CloudWatch logs as:

In part 1, a JSON file can be uploaded to provide IoT job metadata. After the JSON file is uploaded via the UI page: http://localhost:8080 /Job,  the UI application will be automatically switched to the second UI page: http://localhost:8080 /Job. This page shows the streaming data fetched from the WebSocket server, including sensor data, e.g. power curve, wind speed, wind direction and LV active power. When the inspection job status is shown as normal, the UI page shows relevant job information in green font as below: 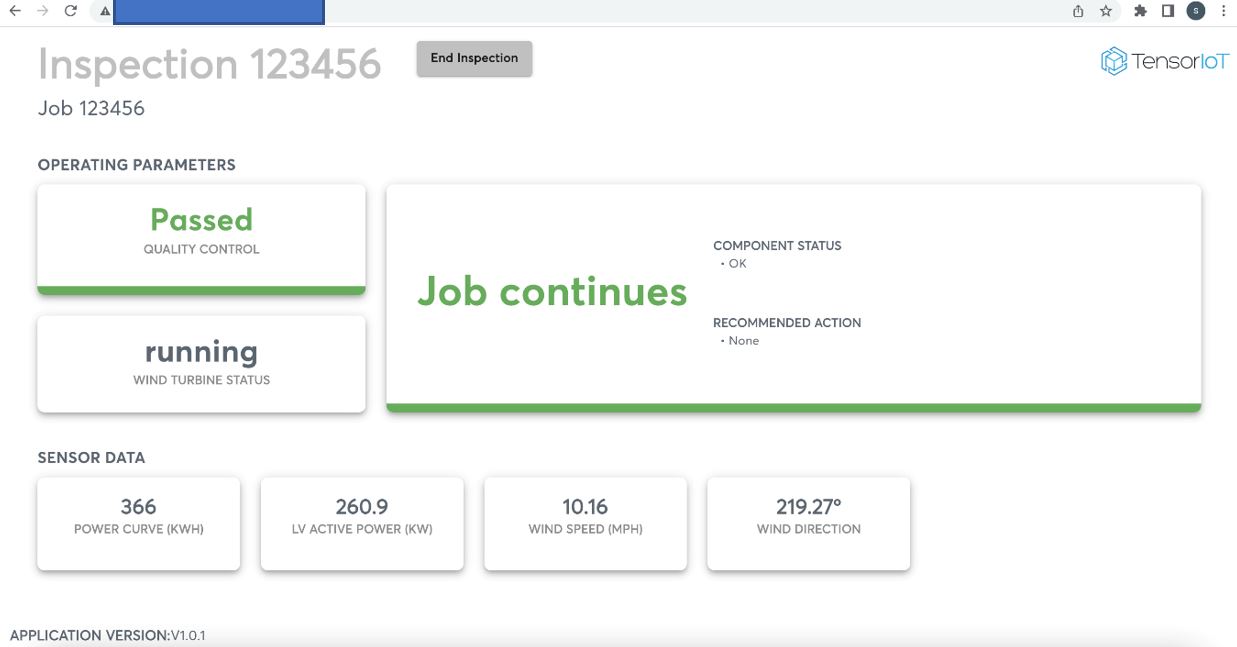 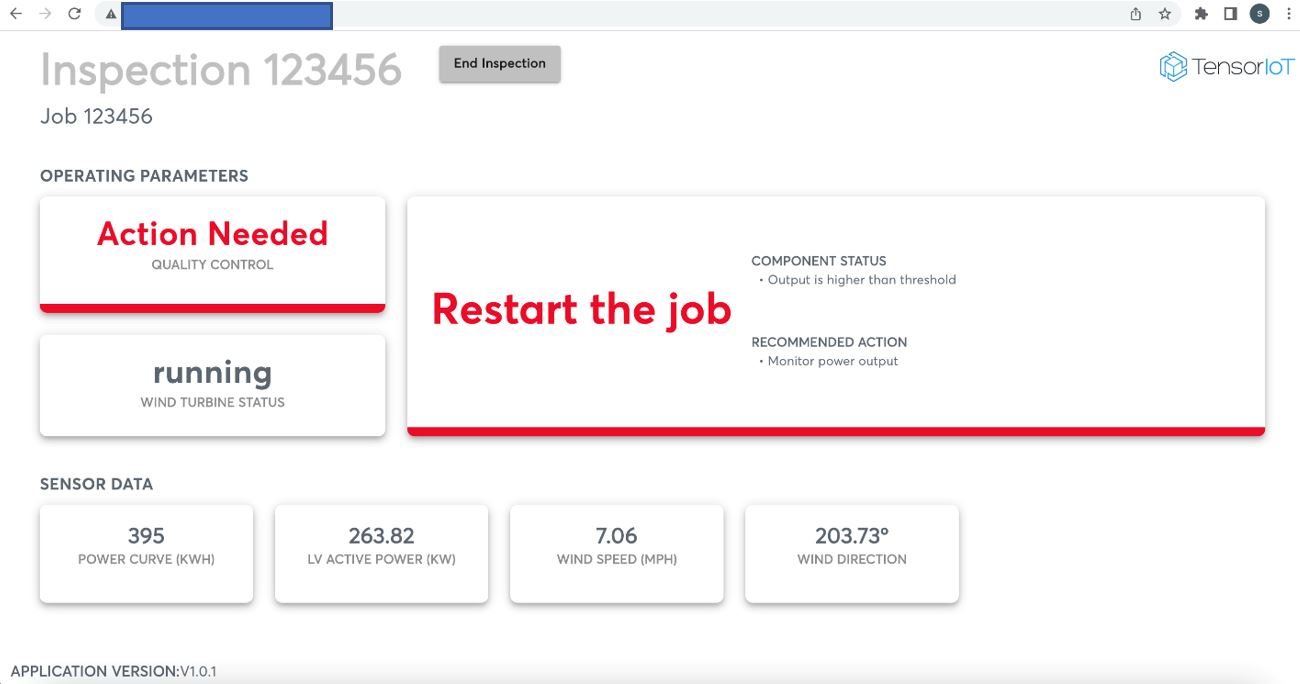 This completes the deletion of the resource created for the blog.

1. In this blog, the wind turbine data source is simulated by using a dummy publisher for demonstration purpose. When this application is implemented in industrial settings, various data sources can be used, e.g. PLC, controller, conventional data servers, etc. There are several Greengrass community components can be used as data source connectors. Such community components can be deployed to edge devices via AWS IoT Greengrass v2.

2. The WebSocket component explained in this blog can be further extended to include custom data analytics workflow. Such data analytics can enrich the wind turbine data to generate more operational insights.

In this two-part series, we reviewed the benefits and challenges of remote IoT job monitoring and processes. To address such challenges, we proposed a UI application at the edge solution. It is jointly developed by AWS Professional Services and AWS Partner, TensorIoT. During the solution development phase, developers from both companies used the latest AWS IoT Greengrass V2 run time to significantly accelerate the IoT edge application development. The modularized components developed in this application can be easily deployed and updated to thousands of IoT devices using AWS IoT Device Management and AWS IoT Greengrass. In the future, TensorIoT will be able to build more custom applications for various use cases based on the experiences they learned while developing this IoT UI app at the edge.