Historically, filmmaking has been a linear process. Scenes are shot, and reviewed via an on-set playback device, then the day’s footage is sent to kick off the dailies process. Video cards, shuttle drives, and other portable media are used to get the content to a production facility to ingest it, perform checksums, create proxies, and kick off downstream workflows for color, editorial, conform, and several other creative services. It’s a process full of surprises and talented post professionals making adjustments (read “diving save”) to the digital gift that shows up at the end of the day. A new approach to content production is poised to shake up this traditional model and drastically compress project timelines: near real-time filmmaking with Amazon Web Services (AWS) and APN technology partners. Led by the Hollywood Professional Association (HPA), the proof-of-concept workflow removes dependencies on offline dailies processes and instead facilitates immediate review of captured scenes.

Working with accomplished creative and filmmaking professionals, the cloud-enabled filmmaking workflow was demonstrated in production on a proof-of-concept (POC) short film, “Lost Lederhosen” during the annual HPA Tech Retreat, February 18th, 2020 in Rancho Mirage, CA. The project was conceived and orchestrated by Joachim Zell (EFILM, VP of Technology) who demonstrated many aspects of the film creation process along with Sam Nicholson (Stargate Studios), Steven Shaw (ASC, Director) and Roy Wagner (ASC, Director of Photography). The film’s final scenes were captured on-site, with conform, graphics, editing, and color grading performed in front of a live audience. The POC ended with a live screening at the end of the day. The entire media lifecycle was observed generating a streaming finished product, a full DCP (Digital Cinema Package), and an IMF (Interoperable Mastering Format) for distribution and playout on devices. 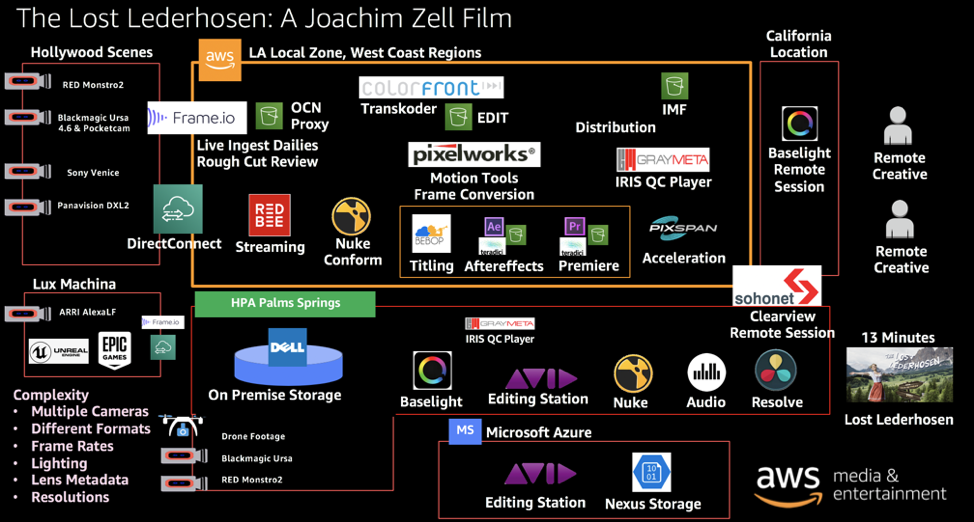 In deploying a live camera-to-cloud workflow, video review collaboration platform Frame.io integrated with AWS to host all project assets. The project used multiple different cameras, lighting setups, formats, frame rates, and resolutions, which added to the complexity of the project. With a cloud-based approach, all takes are available for instant review remotely. The AWS Cloud was used as a content lake, acting as the central hub for all production file activity. This allowed access to participating partners and let them all work together.