How do response headers policies fit into the CloudFront workflow?

With Amazon CloudFront you can deploy your own custom logic at the edge by choosing between two edge serverless environments. For more complex and compute intense operations Lambda@Edge is often the right solution, while CloudFront Functions makes a good alternative for simple request and response manipulations at the very large scale. To learn more about unique characteristics of each options and corresponding use cases, review CloudFront Functions announcement blog post. A common pattern in response manipulation category is to insert response headers before serving the response to the viewers, with little or no conditionality. Typically, this involves inserting widely used headers such as cross origin resource sharing (CORS) headers, or security headers like Strict Transport Security (HSTS) that specify the security-related details of communications between the browser and the server. Customers also add missing headers that the origins can’t generate by default, or just pass a static header carrying additional information relevant to the application run by the clients. Today, they use CloudFront functions for this. While CloudFront functions is a well suited environment to support that, it creates an overhead for the customers when they need to extend their code development practices to the CDN part of the architecture. It can also take some effort to keep consistency in applying common set of headers across different workflows.

As outlined in the preceding diagram, response headers policies do not impact the origin-supplied headers stored in CloudFront’s caching layers. Headers configured in the policies are inserted after the response leaves the cache, and before the viewer response event that triggers a function if configured. If you have an edge function attached to the same behavior, policy inserted headers will be accessible in your function through the event object listing all the headers associated with the response. You can use that functionality by treating the headers generated through a policy as inputs for the function that will impact how the code is executed. This is similar to using environmental variables.

Response header settings are organized into policies, a configuration construct introduced with the Cache and Origin Request policies. Customers use policies is to make it easier to define and manage CloudFront settings by grouping them into reusable configuration sets. The high-level process of defining and managing the response headers policies would normally look as follows:

To review existing or create a new policy you can access them from Policies page listed in the navigation panel, as shown in the following screenshot. 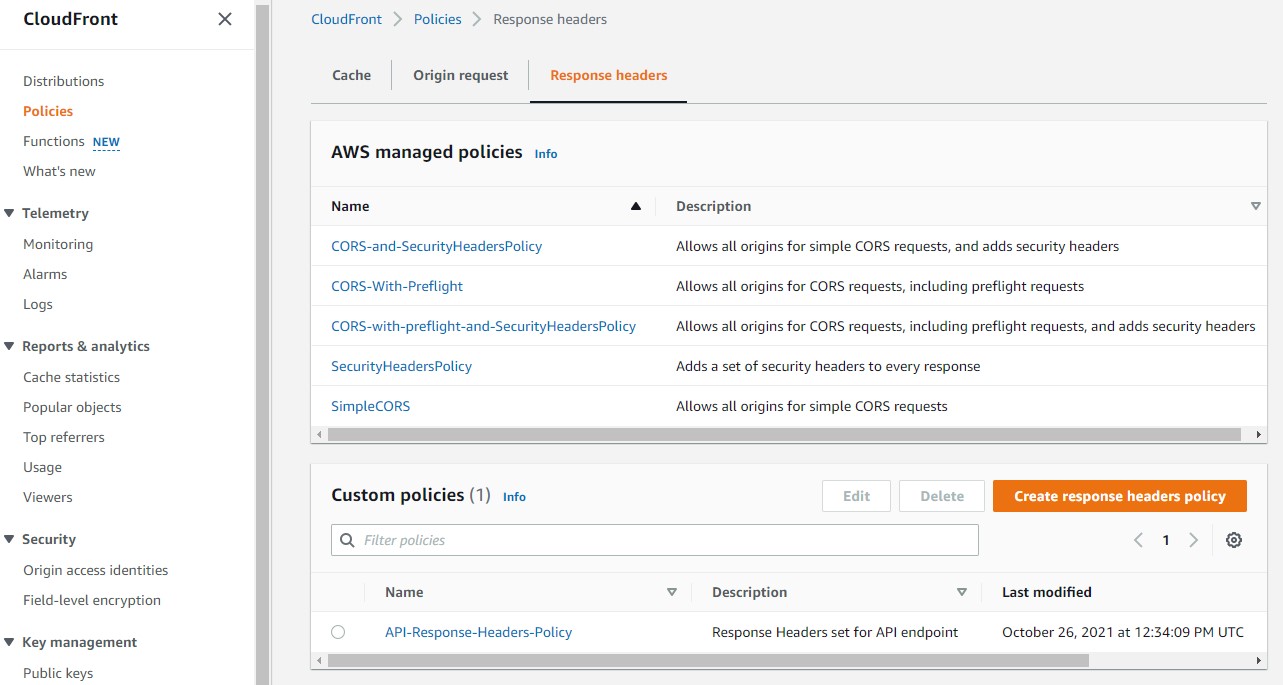 On top of the response headers policy page customers can find a list of managed policies with different combinations of generic header configurations where customers can apply basic settings quickly. While the specifics of these policies have been curated with special care to help avoid disrupting the viewer’s experience, make sure to review what each policy does and what headers are inserted. This will ensure your web application aligns with it well. Because browsers can cache information in these headers for longer period of time, reverting the effects of implementing some of the headers in the policies can require some time to take effect on a viewer’s behavior. Each policy, managed or custom, is comprised of three distinct sections that govern separate sets of response headers. 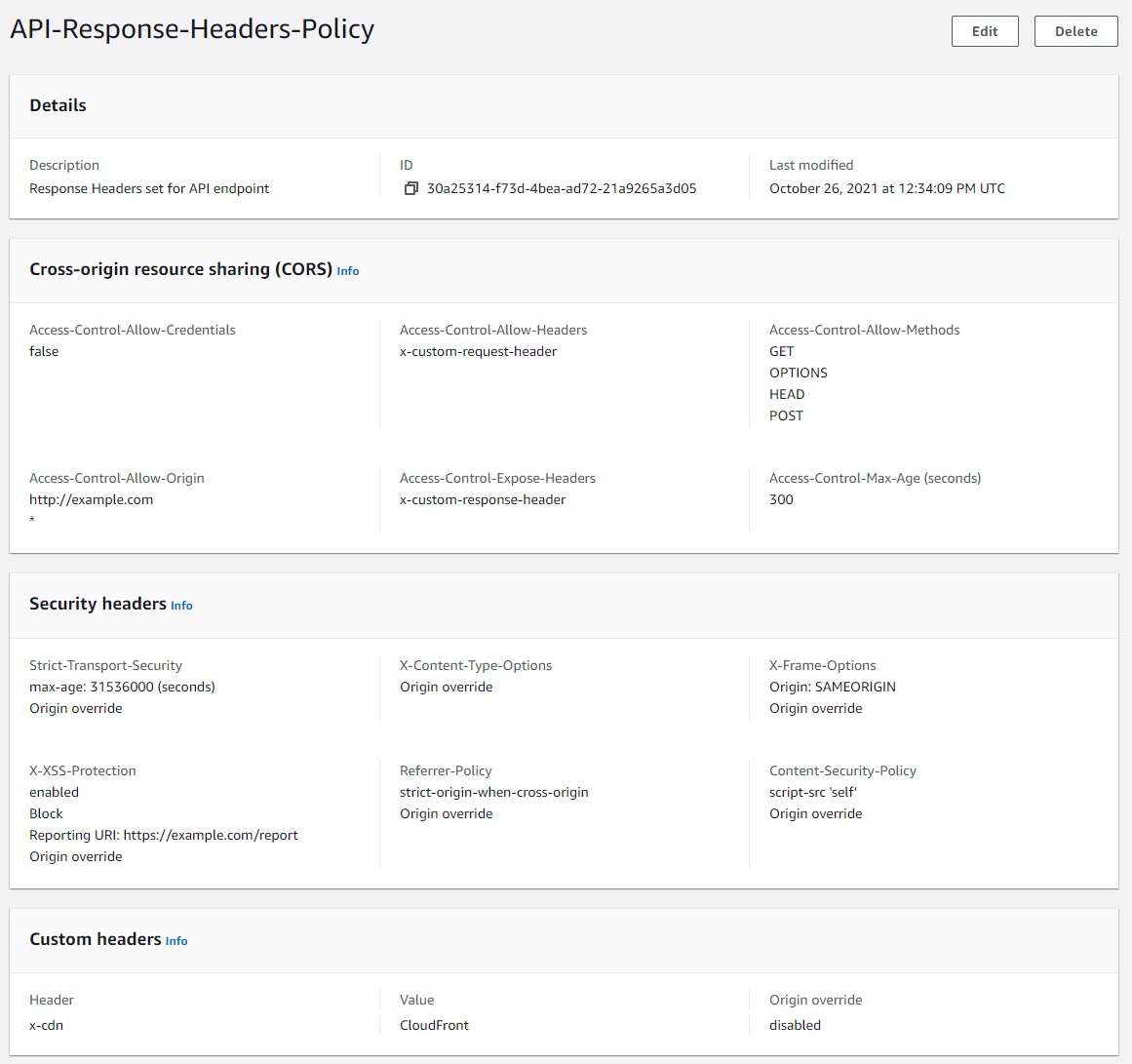 Cross-origin resource sharing is a mechanism used by browsers and web application origins to conditionally allow requests that would normally violate same-origin policy restrictions. These restrictions were established to protect the users visiting a website from triggering unintended requests to third party domains. For example, by malicious script injected on the website that sends the instructions for new transaction or collect sensitive information. As an owner of a web application, same-origin policy principle prevents you from receiving potentially fraudulent requests harming your users. However, there are various use cases when you want to deliberately relax this restriction to allow cross-domain requests initiated from trusted domains. By inserting appropriate CORS response headers you instruct the web browser what is the allowed scope of the requests, with the conditions to be met, in order to permit request and response. There are six CORS related response headers pre-defined in the response header policy, applicable both for simple and pre-flight requests. Now, you can define multiple origins (as in source domains) without needing to include the “Origin” header in the cache key definition, which decreases the cache hit rate.

In addition to CORS headers, there are other well-known headers you can add to improve the security of your website. The headers grouped in this section serve as directives for the browser on the restrictions it should follow in the context of your website. For example, setting Strict-Transport-Security header dictates that the browser will upgrade the connection to HTTPS for all the subsequent requests the browser makes for any page on the same domain, even if the user types http:// in the address bar. Including each of these headers is optional and you can decide which of them you want to use. Six security headers that can be included in the policy are

There is a long-tail of use cases that require adding other type of headers. As these use cases vary depending on the application context, custom headers allow defining static response headers as simple key-value pairs. Use cases for custom headers include:

Note: It is also possible that the headers you specify in the response header policies can conflict with the headers supplied by the origin. Specifically, when CloudFront distribution operates with multiple origins there could be inconsistencies in what particular set of headers each origin sets and when. To address that, by using response header policies you can configure how to manage overlapping headers, either by overriding the response header coming from the origin or by omitting header insertion if the original response already includes it and you keep the override option disabled.

You may wonder why the response headers policies have been structured with three separate sections, with the first two containing limited set of predefined headers instead of keeping policy as a simple list of key-value pairs. There are two important benefits that stem from the separation of the two security header sets:

As an example of this, let’s consider how the CORS conditionality works with the Access-Control-Allow-Origin header. This is one of the key headers in context of CORS, which tells the browser what domains are allowed to load the content from your website. If there are multiple domains that you want to allow, you should submit the list of them as an input in the CORS section. However, CORS specification dictates that only one value can be returned in that header. Therefore, CloudFront’s host will determine the domain from which the request originated through the Origin header and validate that against the list of defined values for Access-Control-Allow-Origin.

For example, assume CORS headers in the policy are defined as follows: 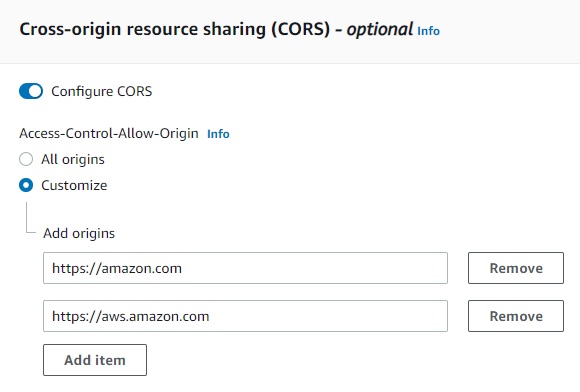 With a simple CORS request made, only one of these two values will be returned accordingly:

After you create a custom policy or select one from the list of managed policies, the next step is to associate it with the right cache behaviors. The configuration workflow is very similar to Cache and Origin Request policies experience. Once you navigate to the cache behavior settings, Response header policies list is available under Cache Key and origin request configuration from which you can select the one that will be used for this behavior. 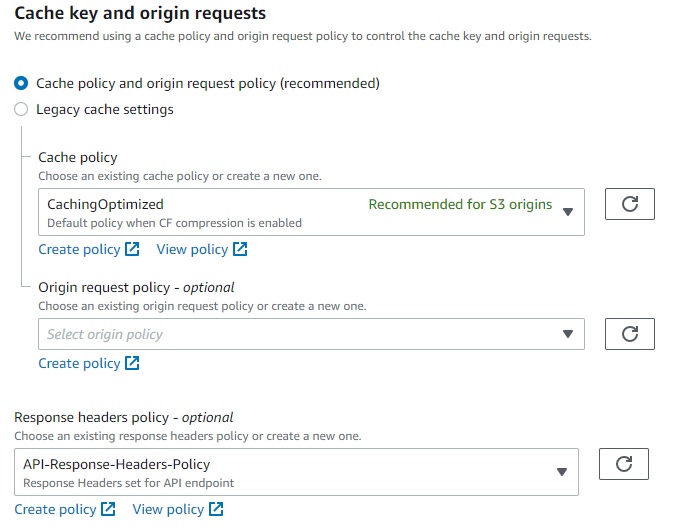 Note that response header policy is an optional setting. There will not be any default policy applied to any of your existing behaviors, or new behaviors, after the feature launch. Once the policy is associated with a behavior, within the time it takes for CloudFront configuration changes to propagate, you will see the effects of it on the response headers returned.

Kamil is an Edge Specialist Solutions Architect at AWS. He advises customers across industries on building performance optimized and secure solutions with AWS Edge Services.

Megha is a Product Manager on the Amazon CloudFront team in Seattle, WA.