In this post, we show you how to centralize outbound internet traffic from many VPCs without compromising VPC isolation. Using AWS Transit Gateway, you can configure a single VPC with multiple NAT gateways to consolidate outbound traffic for numerous VPCs. At the same time, you can use multiple route tables within the transit gateway to maintain VPC-to-VPC isolation. This hub-and-spoke design enables you to manage all your outbound internet communication securely from one place.

Without AWS Transit Gateway, you have to combine an internet gateway with NAT gateways or NAT instances for each VPC needing outbound internet access. However, if you have more significant numbers of VPCs, the management of multiple internet gateways and NAT gateways and instances adds labor and costs. In that case, you can save overhead by centralizing outbound traffic with AWS Transit Gateway.

While this design allows for a centralized architecture with a pair of shared NAT gateways, it is possible to modify this architecture to replace the NAT gateways with other security appliances to carry out such tasks as traffic capture, policy enforcement, web filtering etc as long as those appliances are capable of performing NAT function and have required route configurations.

This architecture shows you how to use AWS Transit Gateway to centralize outbound internet traffic from multiple VPCs using hub-and-spoke design. This design includes two NAT gateways, as illustrated in the following diagram. 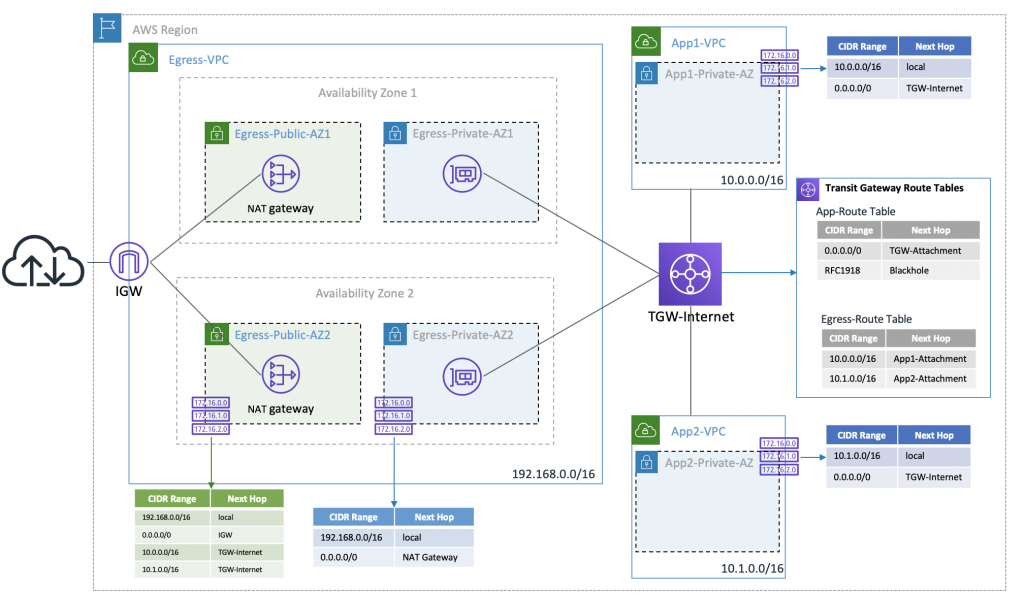 To complete this walkthrough, you need:

In this section, we demonstrate how to deploy AWS Transit Gateway and three VPCs with non-overlapping IP space in a single Region and attach the transit gateway to these VPCs. Within the hub VPC, we show you how to deploy NAT gateways (one in each Availability Zone) and an internet gateway. Finally, we demonstrate how to configure the route tables in all the VPCs and use a test instance in the spoke VPC to verify outbound internet connectivity.

If you prefer to automate the entire test setup, you can follow the instructions here to deploy all the components. This automates the next three stages of the deployment, enabling you to proceed directly to “Testing the Deployment” section. Make sure to choose the desired Region for this stack before you deploy the components.

Creating and configuring the VPCs

First, we show you how to deploy the essential components of this design, including the VPCs, subnets, an internet gateway, NAT gateway and route tables. The following instructions deploy this example in the N. Virginia (us-east-1) Region. However, you can deploy this procedure in any Region by adjusting the Region and AZ parameters.

Deploying and configuring the transit gateway

To test this setup, launch three EC2 instances. Launch the first in a public subnet in the Egress-VPC as the bastion host. Launch the remaining two instances in VPCs App1-VPC and App2-VPC. For more information, see Launch an Instance.

Log in to the bastion host instance using SSH. Then use SSH to connect to App1VM. To verify that AWS Transit Gateway routes traffic correctly to the NAT gateway in the Egress-VPC, use curl to connect to several websites. Then use SSH to connect from App1VM to the App2VM. Although allowed by security group policy, this connectivity should fail. This failure confirms that AWS Transit Gateway isn’t routing between the App1VM and App2VM instances. The following diagram illustrates this test workflow.

In most cases, a centralized NAT gateway provides a better return on your investment than multiple gateways. Even considering the NAT gateway expense and the data transfer cost per GB, the process should reduce your per-hour charges for multiple NAT gateways and simplify solution management.

The following items affect the cost of this solution:

No design can take account of all use cases. However, cost and performance issues might make this solution ill-suited to some use cases.

There is an additional $0.02/GB data processing charge compared to running the NAT gateways in the local VPC. Depending on the number of VPCs you run and volume of data transferred, you might prefer to deploy a local NAT gateway.

Before concluding, we should also draw your attention to two other critical design elements:

While setting up your transit gateway, we configured all of the RFC1918 IP space (192.168.0.0/16, 172.16.0.0/12 and 10.0.0.0/8) as blackhole destinations in the App route table. Because we are advertising 0.0.0.0/0 route for each of the App VPCs, traffic destined to another VPC routes to NAT gateway, which reroutes the traffic to the destined VPC. As a result, communication among VPCs succeeds even though AWS Transit Gateway does not directly route this traffic. Adding the blackhole routes prevents undesired routing and makes sure VPCs remain isolated from each other.

The design presented in this post enables you to centralize outbound traffic through one VPC hub supported by two shared NAT gateways. You can also use this design to replace the NAT gateways with other security appliances that help manage outbound traffic—for example, carrying out deep security inspection, traffic capture, policy enforcement, and web filtering.

However, you are ultimately responsible for designing high availability and scalability into these appliances. AWS uses a distributed architecture to maintain the fault tolerance and scalability of each NAT gateway. If you replace the NAT gateways with Amazon EC2 instances, your design routes to only one instance per prefix and doesn’t perform health checks on static routes. Make sure that any replacement security appliance can perform the NAT function and has the required route configurations.

In this post, we showed you how to use AWS Transit Gateway to build this centralized exit point to the internet. By consolidating your outbound traffic, you can manage outbound communications security, scaling, and configuration in one place. If you run more substantial numbers of VPCs, we believe that this centralization can save you work, money, and stress. However, while this design reduces the number of NAT gateways and internet gateways you have to manage, bear in mind that it also requires you to deploy and manage transit gateways at scale.

Lastly, we have only shown you traffic output through a NAT gateway to the internet. You can expand on this design and replace the NAT gateways with third-party devices that can perform additional filtering capabilities like URL filtering, malware detection, and outbound protocol inspection.