Amazon Virtual Private Cloud (VPC) is a logically isolated virtual network. It has inbuilt network security controls and implicit routing between VPC subnets by design. Network security controls such as security groups (SGs) and network access control lists (ACLs) provide you with options to control network traffic. However these controls operate at network and transport layers of OSI model, and filter traffic based on IP addresses, transport protocols, and ports. You may have additional requirements to have network security controls at application layer. As an example, application protocol detection and filtering based on application protocol properties such as HTTP headers and TLS version. Previously, you could implement such control with AWS Network Firewall in select deployment models as per part 1 of “Deployment models for AWS Network Firewall”. With a recent enhancement to VPC routing primitives, you can insert AWS Network Firewall between workloads in different subnets of the same VPC. In this blog post, we will review how the enhancement helps a middlebox insertion based on AWS Network Firewall example, and also available deployment models.

With the launch of VPC routing enhancements, you now have additional agility, programmability, and control over the forwarding path of VPC traffic. VPC has an implicit router and route tables are pre-configured with a local route, a default route for communication within the VPC. By default, any traffic from a source within a VPC destined to a target within the same VPC is covered by the local route and therefore directly routed. The enhancement allows you to configure more specific routes at a subnet route table level or replace target for the “local” destination with a middlebox such as firewall endpoint. The key use case is insertion of a middlebox between two subnets for inter-subnet traffic (east-west) inspection. For example, you can create routing rules to send all traffic from a subnet to a network firewall endpoint when the destination is a specific subnet as per figure 1. 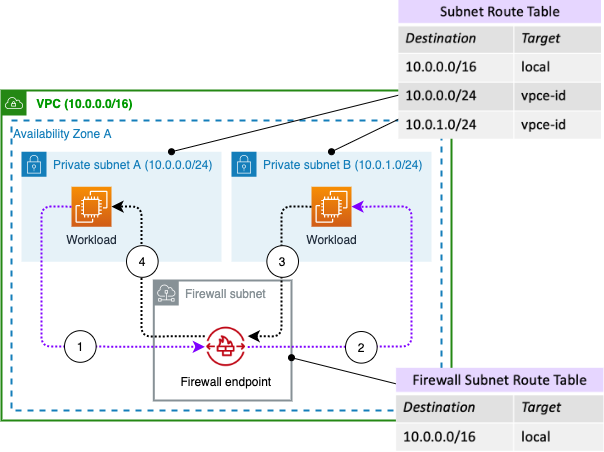 Figure 1: Traffic from subnet A to subnet B is sent via firewall endpoint, return traffic path is via the same endpoint

A couple of noteworthy items to clear upfront about any middlebox insertion described in figure 1:

When you build highly available applications on AWS, you can partition your application to run across multiple AZs. At AWS, we have a principle of keeping AZ independence (AZI) which means all packet flows stay within the Availability Zone rather than crossing boundaries. Network traffic is kept local to the AZ as per figure 2. In such scenario, it is easy to maintain traffic symmetry. 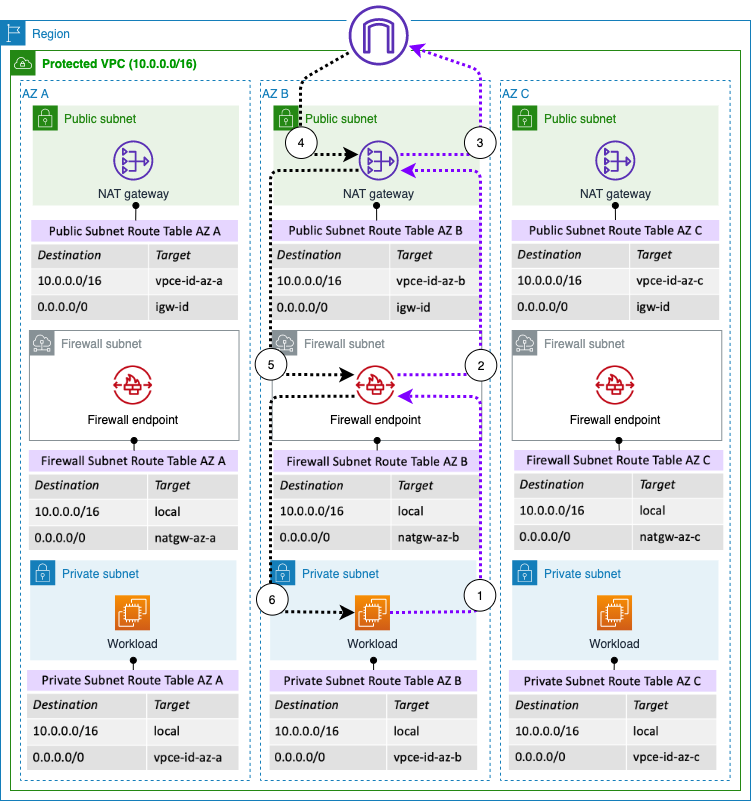 There are however scenarios where traffic must cross AZ boundaries and it is critical to have a guiding principle on how to arrange your routes tables and corresponding routes. The principle is to keep the inter-AZ traffic inspection local to client’s AZ. With such a principle applied, you avoid unnecessary inter-AZ traffic cost in case traffic has to be dropped (as it drops closer to the client). In figure 3, you can see this principle in action with a load balancer sending traffic to application tier, and similarly an application tier sending traffic to a database.

In the figure 3 example, an Application Load Balancer (ALB) enables you to offload TLS. Decrypted HTTP traffic is sent to backend application targets which could be in a different AZ enabling HTTP header and payload inspection. Following our principle, traffic from ALB to backend target is inspected in the same AZ as the client (ALB). The application in turn requires connectivity to the relational (main/active node) database. This traffic once again is processed closer to the client (application EC2 instance) and traffic is returned symmetrically.

1) AWS Network Firewall is deployed to protect traffic between two different subnets in the same VPC.

As shown in figure 4, in a single AZ deployment, you can implement this mode with three distinct subnet route tables. Public route table for incoming traffic from Internet Gateway towards a public workload such as web server or a load balancer. AWS Network Firewall endpoint is provisioned in its own subnet also known as “Firewall subnet” which also has a dedicated route table with the original local VPC route to send traffic to workloads in VPC. This ensures that traffic remains symmetric and both legs of the traffic are passed via AWS Network Firewall. Finally, private route table is associated with App subnet as well as DB subnet forwarding all traffic to Network Firewall endpoint in Firewall subnet. 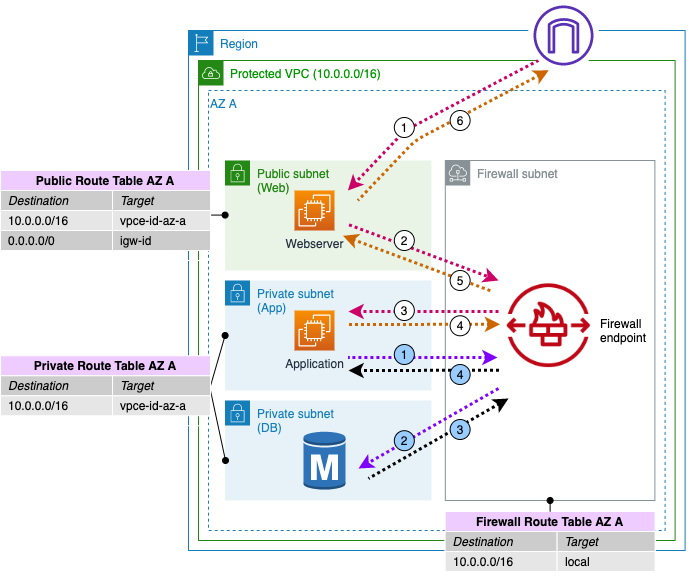 Workloads which are dependent on resources in other availability zones should follow the routing principle outlined in the routing strategy with multi-AZ deployments section. It ensures that traffic is symmetric and inspected close to the client as shown in figure 3.

With this deployment model, traffic sourced in private subnet towards internet is inspected. Prior to the ability to override local routes in subnet route tables, AWS Network Firewall could only be placed between internet gateway and NAT gateway which obscured the source IP addresses of workloads.

With VPC routing enhancements, now we are able to place Network Firewall between private workloads and NAT gateway by replacing target of the “local” route with the firewall endpoint in public subnet route table. This allows us to have complete visibility of IP addresses of the workloads which further allows you to build 5-tuple rules. 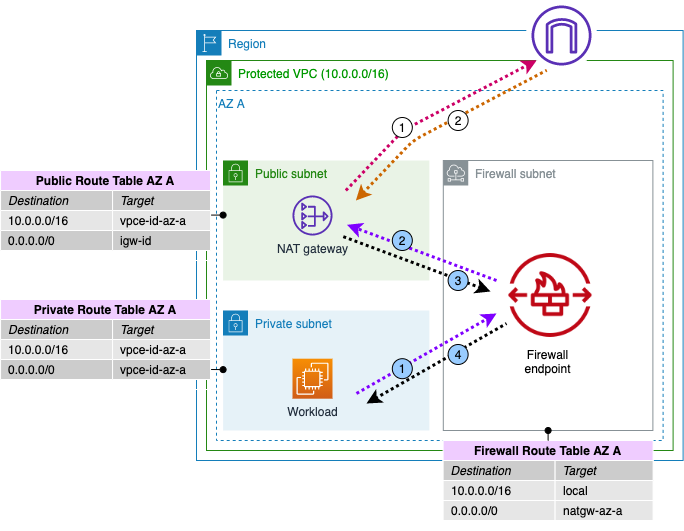 For multi-AZ deployments of this model, each availability zone requires three unique subnet route tables for each subnet i.e. public, private and firewall as shown in figure 7. This ensures traffic is symmetric and remains within the originating availability zone.

In this deployment model, traffic from an ingress VPC can be inspected and filtered before it enters the rest of the network connected via AWS Transit Gateway e.g. other VPCs, on-premises or branch offices.

For ingress purpose, you can use ALB or NLB (Network Load Balancer) targeting workloads by IP addresses or any other self-managed reverse proxy solutions. The benefit is that traffic is inspected very early on the network before traversing your Transit Gateway to other parts of your network. This could be compelling for use cases where 3rd parties are accessing your workloads. The model also minimizes data processing cost as the traffic does not have to traverse in and out of Transit Gateway to an inspection VPC.

Figure 8: Ingress workloads and traffic to the rest of network is inspected using AWS Network Firewall
(click for larger image)

Figure 9: AWS PrivateLink-enabled SaaS offering and shared service combined together and traffic from the rest of network is inspected (click for larger image)

An important change in this model is return routes configuration for traffic coming from AWS Transit Gateway and ensuring the symmetrical routing. Using the guiding principle discussed earlier in the blog, you can configure more specific routes in each Transit Gateway subnet route tables to ensure the traffic goes to local AWS Network Firewall endpoint where the destination belongs. 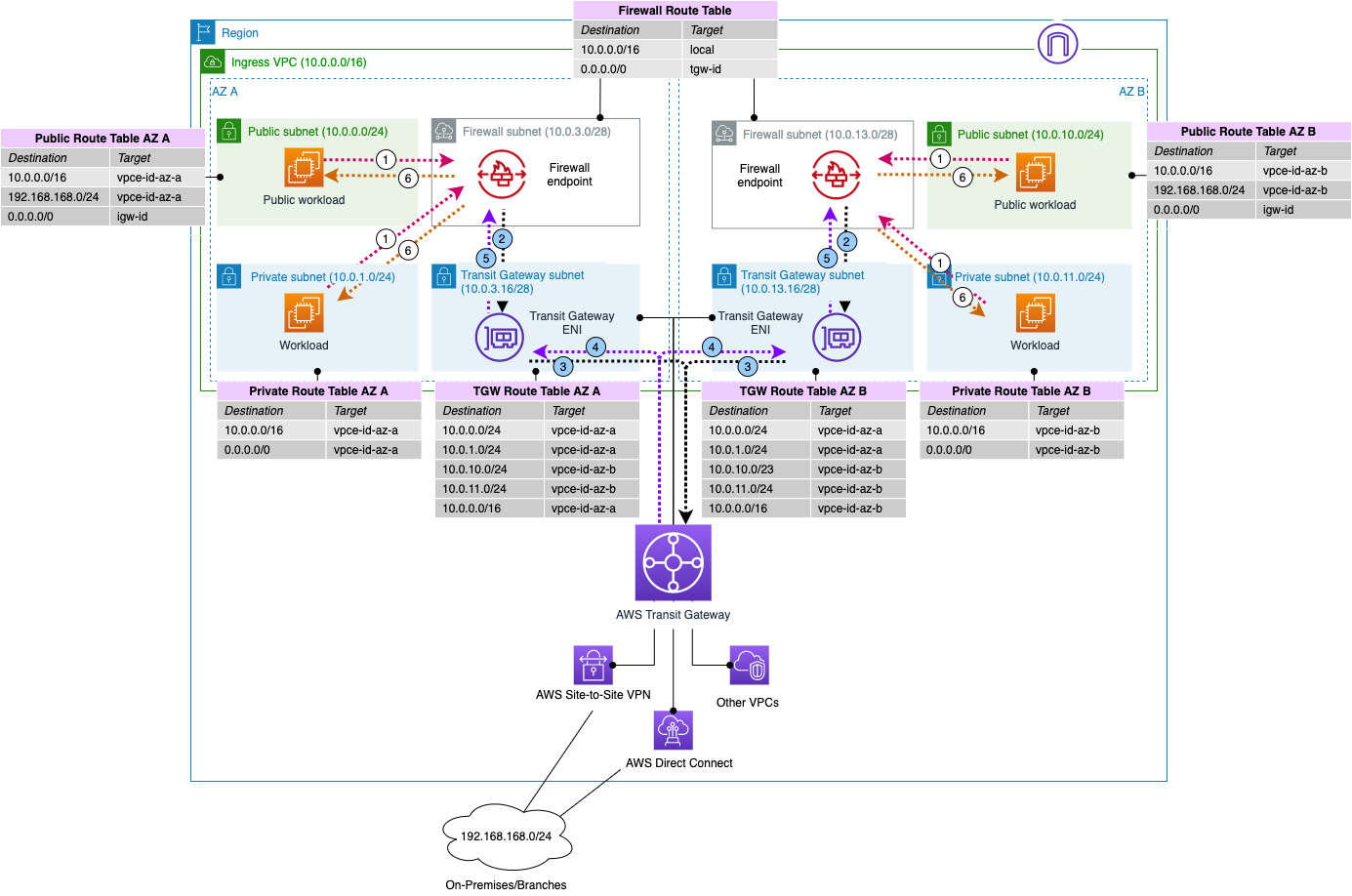 Figure 10: Multi-AZ ingress and shared service combined together and traffic to the rest of network is inspected
(click for larger image)

With ability to create more specific routes or replace the destination of the local route, a VPC owner have additional options to inspect and secure traffic between shared subnets. VPC owner can effectively segregate VPC participants and only allow traffic as permitted by your security policy. You can find more information about Shared VPCs best practices and network segmentation in this blog post.

Shakeel Ahmad is a Senior Solutions Architect – Networking/Hybrid at AWS Well-Architected based out of Melbourne, Australia. As part of his role, he works with customers globally to share best practices of cloud networking in AWS. He has a BS in Computer Science and a MS in Network Systems. He’s passionate about technology and helping customers architect and build solutions to adopt the art of the possible on AWS.