Amazon Virtual Private Cloud (Amazon VPC) provides you with the ability to create as many virtual networks as you need. It also provides different options for connecting these networks to each other and to non-AWS infrastructure, such as on-premises data centers, remote headquarters, or other offices. Most of you start this journey with a few VPCs. However, as you expand workloads on AWS, you scale the networks across multiple accounts and VPCs to meet your needs.

In 2014, we launched VPC peering, which offers point-to-point network connectivity between two VPCs. You can use VPC peering to create a full mesh network that uses individual connections between all networks. However, this can be very complex to manage as the number of your VPCs grows. In addition, for every VPC that needs on-premises connectivity you have to configure an AWS Direct Connect connection or an AWS Site-to-Site VPN connection. This process could take several weeks of implementation based on internal business operations, approvals, and maintenance window schedules.

In 2016 we introduced the transit VPC solution, which is a way to build a hub-and-spoke topology on Amazon VPCs, so that they can centralize edge connectivity. Transit VPC allows an easy way to implement shared services or packet inspection/replication in a VPC. It works across accounts and is easy to set up through an AWS CloudFormation stack. However, it leverages instance-based routing that increases costs while lowering availability and limiting the bandwidth.

In 2018, we released AWS Transit Gateway which offers the same advantages of transit VPC, but it is a managed service that scales elastically in a highly available product. Transit gateways are easy to set up and to use, and are designed to be highly scalable and resilient. By default, you can attach up to 5000 VPCs to each gateway and each attachment can handle up to 50 Gbits per second of traffic burst. You can also attach your AWS VPN connections to an AWS Transit Gateway today. With this in mind, we realized the need for developing an automation tool that would help you gracefully migrate from your existing transit VPC solution to the AWS Transit Gateway service. In this blog post we’ll describe the TGW Migrator tool and show you how to use it.

The TGW Migrator tool provides a seamless migration path from the transit VPC solution to AWS Transit Gateway. It can also be used to quickly attach and enable routing between Amazon VPCs through AWS Transit Gateway, even if they are not a part of Transit VPC.

Aside from quickly and seamlessly migrating your Amazon VPCs to AWS Transit Gateway, this tool provides a quick option to roll back the migration if something goes wrong. A process that would manually take minutes to hours, depending on the scale of VPCs, is easily accomplished within a few seconds.

Before we get into the specifics of the tool, let’s go through some important caveats:

How to use this tool

If you have been using a transit VPC in AWS, then your architecture likely looks like the following diagram: 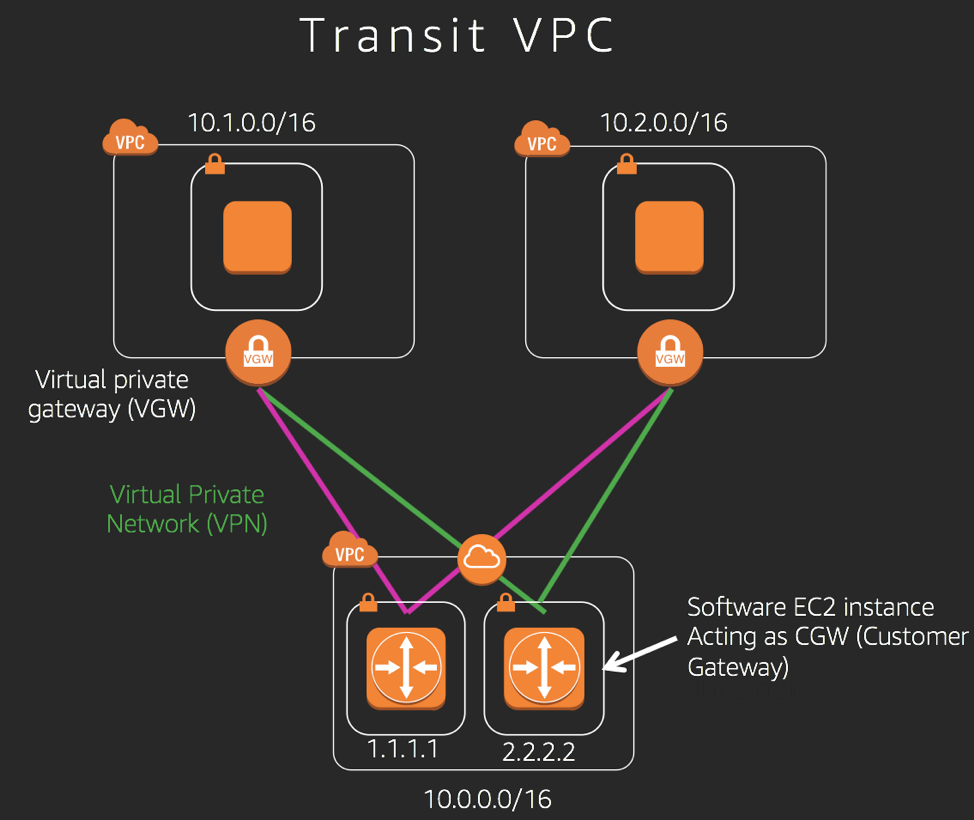 Instructions to attach standalone VPCs to a transit gateway

The TGW Migrator tool can also be used to quickly attach any VPC to a transit gateway, not just spoke VPCs that are part of a transit VPC solution. To attach a standalone VPC, simply add a tag to the VPC, with the Key being attach-tgw and the Value being true. Note: These are case sensitive, so make sure to make them lowercase.

Tagging is illustrated in this screenshot: 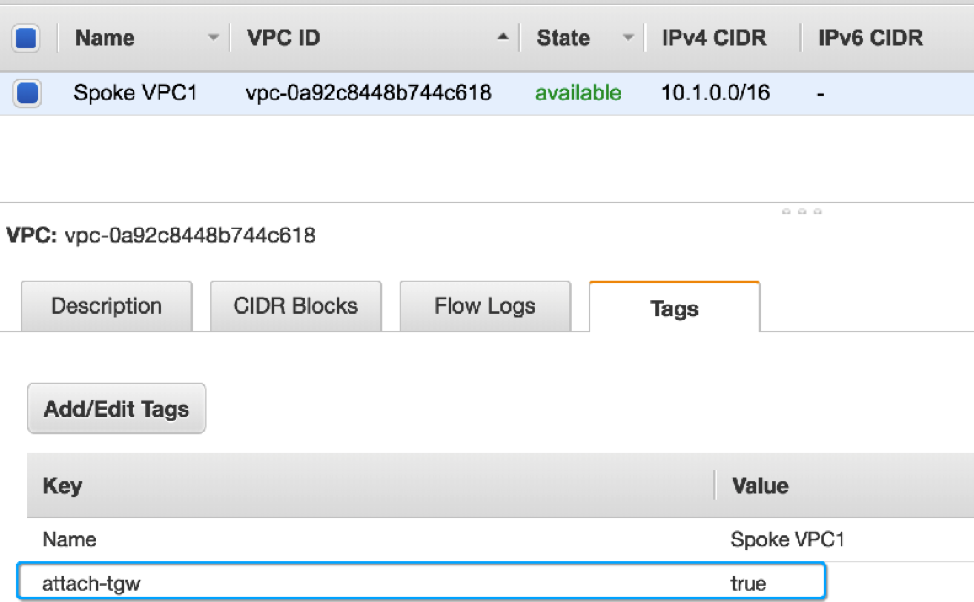 After tagging the appropriate VPCs that you want to attach, follow these steps:

You can optionally grant the TGW Migrator tool API access to secondary AWS accounts. The tool will automatically share a transit gateway with any secondary accounts through Resource Access Manager, attach the accounts’ VPCs to the AWS Transit Gateway, and enable routing between all VPCs in all accounts. Granting cross-account access can be done using the following steps: 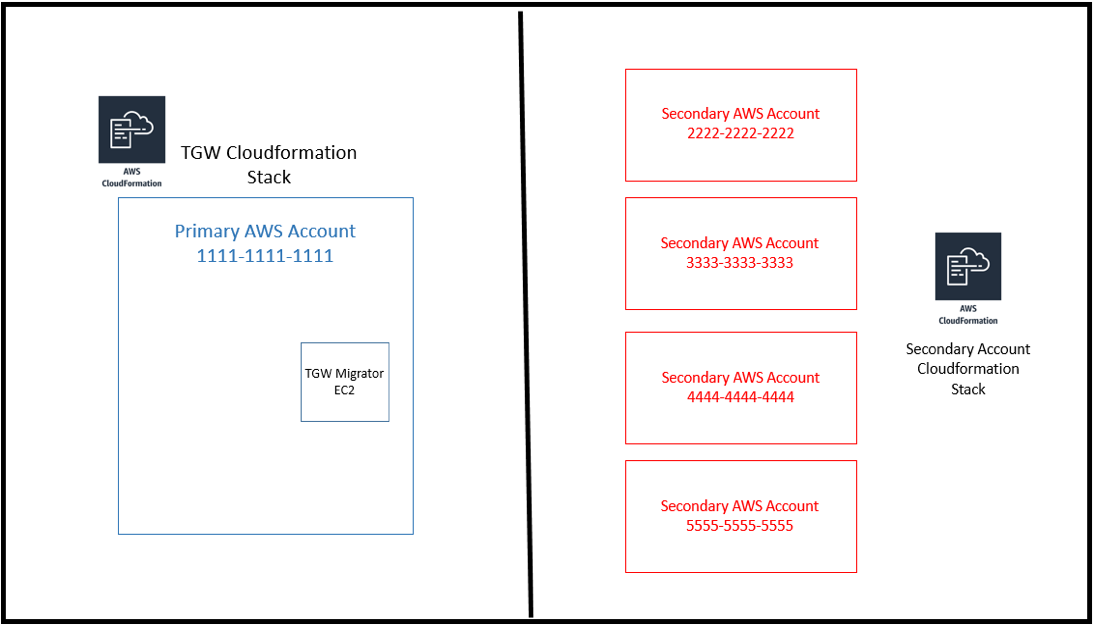 In this blog post, we walked you through the TGW Migrator tool functionalities. We described the detailed instructions for how to migrate spoke VPCs in a Transit VPC to AWS Transit Gateway along with the attachment of standalone VPCs to a transit gateway. This tool is easy to use and provides seamless migration from Transit VPC to AWS Transit Gateway with multi-account support.

We hope this blog post helps you in your migration journey to AWS Transit Gateway. If you have any questions or feedback, please leave a comment for us.