Many organizations want to replay production traffic to a test environment, with no impact on the end user’s experience. This is known as traffic mirroring or traffic shadowing. Testing the new version of a workload with production traffic is a key step for a successful release. Some tests use scripted requests, but real traffic is often a better or complementary approach because, in many cases, it is not possible to anticipate and script all potential client behaviors.

In this blog post, you first learn how to use VPC Traffic Mirroring to replay HTTP requests to a test environment. Then, you set it up with the code that is provided. This approach does not add any proxy or software on your production environment. Therefore, it minimizes risk and does not affect performance.

There are two ways to test with production traffic: splitting and mirroring. 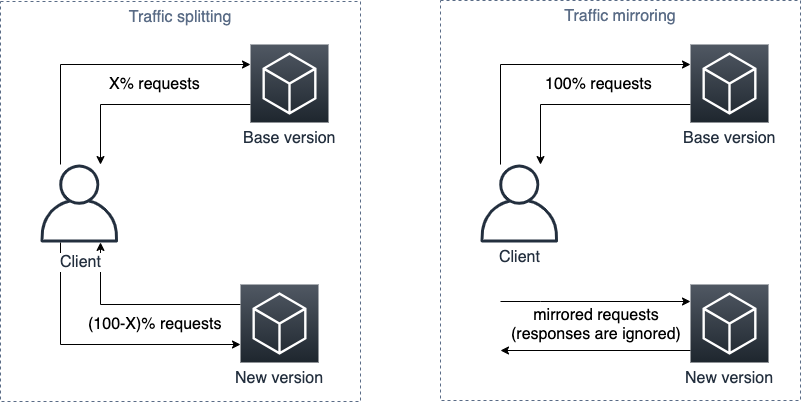 With traffic splitting, you route some requests to the new version and the remaining requests to the base version. This approach is used in canary releases, A/B testing, and blue/green deployments. It is usually easier to implement, because it does not generate duplicate data. But it exposes some clients to the new version being tested, so the risk is that problems are discovered only when the clients experience them.

With traffic mirroring, all requests are routed to the base version and replayed to the new version. The client receives responses only from the base version; responses from the new version are discarded. Mirroring is safe and low impact, because all clients are still handled by the base version. One use case is a workload where zero requests can be lost or degraded. For example, an e-commerce platform or the acquisition of critical banking data. Compared to traffic splitting, traffic mirroring has the additional requirement of preventing data duplication. For example, an idempotent application is needed when requests must only be processed once even if duplicate requests are received, such as for bank payments or e-commerce orders.

AWS has several tools for traffic splitting: at the DNS level, Amazon Route 53 has weighted policies; when load balancing, Application Load Balancer has weighted target groups; for serverless applications, Amazon API Gateway has canary release deployments; and many others.

For traffic mirroring, open-source solutions exist. For example, NGINX mirroring capability, or for microservices, Envoy request mirror policy. But the existing solutions require that you either add a proxy in front of your production workload or install an agent on your servers. The addition of these components to a production environment might not be feasible, might be risky, or might impact performance.

This architecture consists of three components:

The replay handler is provided as an open-source CloudFormation template on GitHub. You can launch it with one click or you can customize it.

In this section, you deploy the proposed solution.

You first need a VPC with private subnets that route internet-bound traffic to a NAT Gateway (NAT Gateway enables instances of the replay handler, which do not have a public IP, to download the handler script from the internet). If you don’t have such a VPC yet, you can launch it using this CloudFormation template.

Configuring the production and test environments

Launch two sample environments: production and test. This step is needed for demonstration purposes only. If you already have existing environments, you can skip this step and go to the next step (“Launching the replay handler”).

Start by using the AWS CloudFormation template to configure the replay handler.

Figure 4 – outputs of the CloudFormation stack 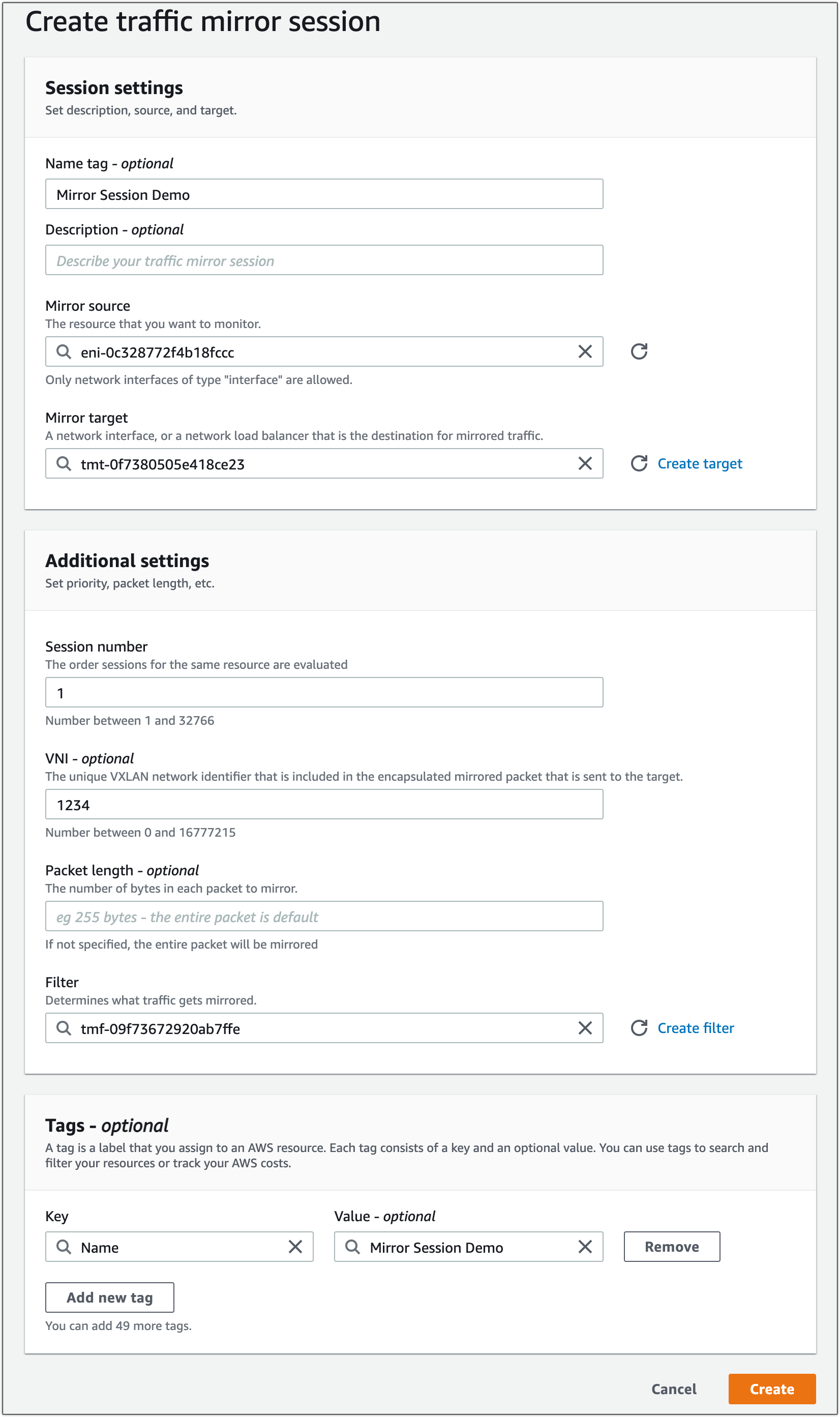 When HTTP requests are sent to your production environment, they are automatically replicated to your test environment. To see that happening, you can visualize the Amazon CloudWatch metric “NetworkIn” of the production and test instances in a metric graph.

To clean up the resources we used in this example, delete the CloudFormation stack that you deployed and the two EC2 instances that you created. If you created a VPC in the prerequisites section, delete that VPC.

In this section, some additional capabilities of this solution are described. A more comprehensive list of parameters and capabilities is available in the documentation for the replay handler on GitHub. This is an open-source project, so if you need an unsupported feature, you can request it or contribute via a pull request (see contributing).

In the walkthrough section, you have configured the replication from and to a single EC2 instance. But in the real world, the production and test environments would probably have multiple instances. For example, an Auto Scaling group fronted by Elastic Load Balancing. You can easily use this solution in a multi-instance environment. To do that, you must configure the sources and the target appropriately.

For multi-instance destination, you simply specify a DNS name as the target when you create the CloudFormation stack. For example, you provide the DNS name of the load balancer for the application layer of your test environment. The stack parameter to use is “RequestsForwardDestination”. You must specify a DNS name preceded by the protocol (HTTP or HTTPS). For example: “https://load-balancer-address.example.com”.

Replicating a fraction of the requests

When you deploy the CloudFormation stack for the replay handler, you can optionally specify additional parameters.

Traffic mirroring is a safe and effective technique to test new versions with production traffic with no impact on the client. In this blog post, you have learned how to mirror HTTP requests from a production environment to a test or pre-production environment using VPC Traffic Mirroring. This approach does not add any components to the production servers or in front of them. Therefore, it minimizes risk and does not affect performance. For more information on VPC Traffic Mirroring, see the documentation and this webinar. 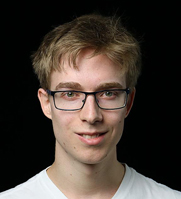 Simone is a Solutions Architect at AWS. He has been working with passion in the tech industry since 2012. At AWS, he helps customers succeed in implementing AWS technologies every day.