IoT solutions today are both complex and business critical. At the same time, testing them thoroughly proves difficult because of the need to apply conditions of load, network, sensor behavior, and others. To address these, “Doppelio” – a SaaS-based IoT test automation solution was built as it helps alleviate IoT test limitations. It does so by spinning up virtual devices on-demand to simulate several conditions. A customer creates virtual devices – called Doppels, that behave like real devices.  Doppels are controlled using our simulation engine to verify if IoT applications can handle different scenarios. 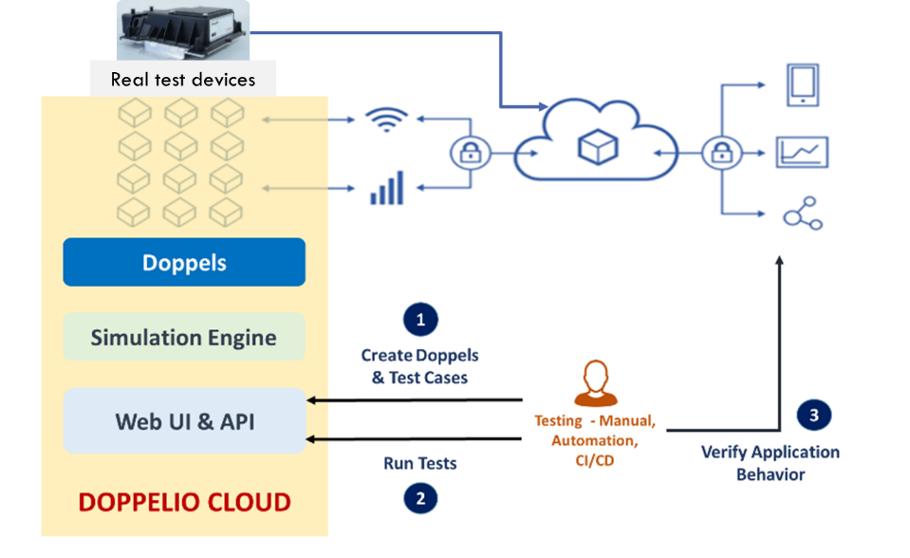 Most IoT devices use typical application protocols like MQTT, HTTP, Web Sockets, or at times even raw TCP. All these protocols are supported by Doppelio solution that allows it to communicate with the customer hosted cloud applications.

The customer first sets up their device models, creates virtual devices – the Doppels – and then authors various tests to ramp-up load. This introduces network and data faults or various data patterns to validate behavior of their cloud applications under different conditions.

Recently, we had a requirement to simulate IoT devices that used multicast communication. Since we are hosted on AWS, our first question was whether AWS supported multicast. AWS Transit Gateway supports multicast natively, hence could  leverage this capability in our setup.

Considering the availability of Internet Group Management Protocol (IGMP) Multicast on AWS Transit Gateway, we built the architecture on AWS. We also referred to the blog Integrating external multicast services with AWS where we saw reference architectures that met our hybrid multicast source and receiver requirements.

This post describes in detail how we went about building this architecture to enable multicast routing between AWS and on-premises.

The scenario involved simulating a system akin to SIP devices (also known as VoIP phones) that could be used for group addressing using multicast audio. The devices could be used to join a conference call or to broadcast to a group of devices. The devices would be in a network with multicast routers. For group addressing, they would send streams to a specific multicast group which other devices would join. For a conference call, would be initiated by a person when they “dialed in” to their conference code. 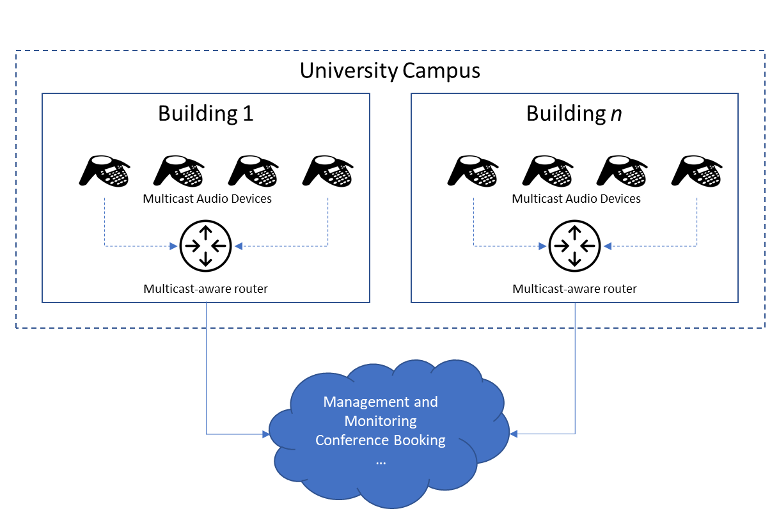 Doppelio was to be used to create these virtual SIP devices, communicating over multicast with each other, and with a cloud-based system for managing and monitoring them. Additionally, the intent was to simultaneously test with both real devices and Doppels. The overall picture would then look like: 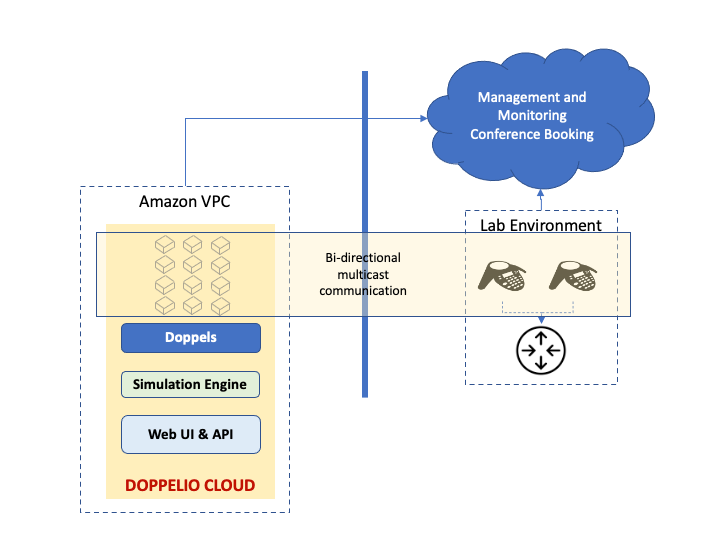 This posed multiple challenges that we needed to address:

Setting up multicast in AWS and on premises using Transit Gateway

The approach we took was to build architecture incrementally to eventually reach final state. The steps we considered were:

Our first step was to look at the newly introduced support for IGMP v2 to see if we could use that for dynamic membership.

Please note senders do not require any special configuration as above.

In a couple of seconds, the Transit Gateway Multicast Group showed the receivers as members of the above group. After this, we used another instance as a source, by running iperf in client mode:

And with this, the traffic was reflected correctly on all receivers!

Step 2: Build connectivity between VPC and on premises lab

For this demonstration, we will be configuring 2 overlay tunnels as follows:

Configuration of both the tunnels is summarized below for easy reference of the readers.

Configuration of GRE tunnel between Amazon VPC and on premises

Loopback interface configuration (required for multicast to work over GRE)

Kindly make sure for this loopback IP to be reachable from both the sites.

Verify the Tunnel configuration by pinging the Remote IP address.

Now that we have successfully established a GRE tunnel between both the sides, it’s time to log in to both the CSRs and set up multicast routing and enable PIM on the relevant interfaces so that both the CSRs will start forwarding Join requests from receivers towards multicast sources.

Multicast routing should be configured on the first hop router (FHR), the rendezvous point (RP) and the last hop router (LHR) to support multicast over the GRE tunnel.

We have configured the AWS side CSR as a RP router. 192.168.250.1 is the lookback interface configured on the CSR running inside Amazon VPC

Sample multicast configuration on the AWS side CSR

Once multicast setup was up, we used VLC Media Player/ Singlewire  testing utility on Windows Ec2 instance to send /receive multicast traffic from AWS to on-premises and vice-versa. 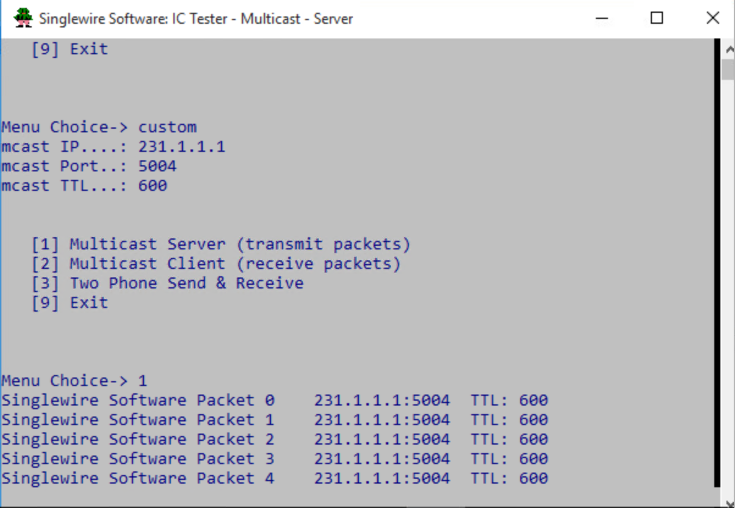 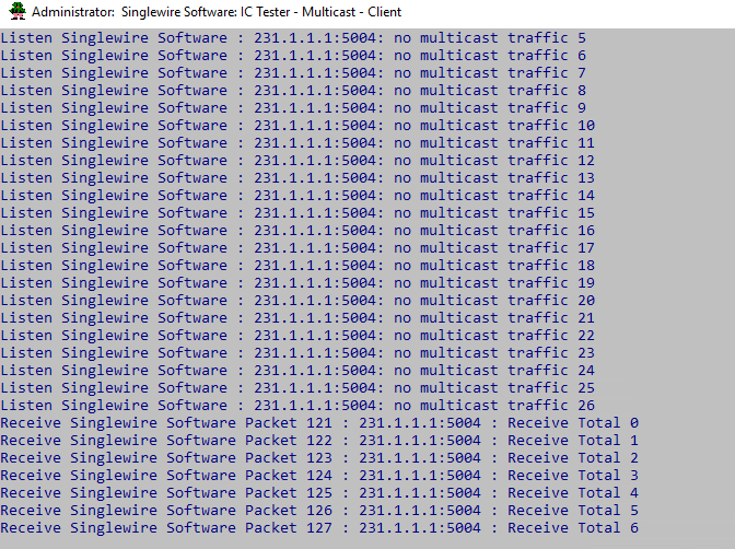 We then set up our Doppelio EC2 instances so that they had the same OS configuration as Step -1 above, and when we created our virtual devices the Doppels – on these instances, they were able to send and receive multicast traffic with on prem appliances.

IoT solutions are becoming more and more widespread and mission critical, and their testing is therefore essential. Devices are also evolving beyond simple point data sources to being rich multimedia capable entities, and the ability to interact with them using mechanisms such as multicast right from the cloud is an important element.

Multicast on transit gateways allows us to build advanced architectures to perform multicast routing on AWS.

The AWS support for IGMP is a key capability that customers can use in this area. It makes it easier for customers to scale up multicast workloads, while also simplifying the management of multicast group membership and network deployment.