Today, viewing video content is a prevalent form of online activity whether in entertainment, education, marketing, or information. For example, as a Solutions Architect at AWS, I tend to watch hours of video a week to learn about technologies, and I also leverage video content to convey ideas and best practices in a scalable way. According to Sandvine’s Global Internet Phenomena Report in 2018, video accounts for almost 58% of the total downstream traffic on the internet.

Research shows that the quality of streaming video has a considerable impact on user engagement, which determines how much value is generated from video content. For example, a 2018 study by Nice People At Work found that when a viewer experiences a buffer ratio higher than 2%, the chance of user churn increases by 30%. In general, video streaming quality depends on multiple components like encoding, player heuristics, and video delivery.

In this two-part series, I will focus on video delivery. In part 1, I will explain how a content delivery network (CDN) like Amazon CloudFront can improve your video delivery quality, and whether using multiple CDNs is beneficial for your company to improve quality further. I’ll conclude part 1 with recommendations on how to measure the performance of a CDN. Part 2 is intended for companies who have made the decision to use multiple CDNs. In part 2, I will provide prescriptive guidance and also some questions you should consider when pursuing a multi-CDN strategy.

Performance and availability of Amazon CloudFront

As a mature and robust CDN, CloudFront has implemented systems and optimizations that benefit our customers with the levels of availability and performance that they expect from AWS.

Every time a user establishes a TCP connection to a CloudFront point of presence (PoP), we measure the round trip time during the 3 way handshake, and then use these data points to compile, in real time, a table of PoP-to-user network latencies. Additionally, we enrich this table with latency measurements initiated from various experiment systems (such as Amazon web properties) that provide us representative latencies for viewers on thousands of global networks. Whenever a user makes a DNS query to resolve a hostname accelerated by CloudFront, it resolves to IP addresses of the best PoP in terms of latency. This way, viewers receive the best experience by being served from the best location for them at that time based on continually updated performance data. By combining this latency data with other performance and load conditions, CloudFront ensures the best connection characteristics for the video delivery and is very responsive to changing network conditions.

CloudFront is designed around the principles of systemic redundancy and component expendability. Any given component in CloudFront is designed to minimize the impact to the overall system if the component fails. For CloudFront, component failures can be due to a variety of causes such as hardware or physical failures, network failures, single host failures, capacity overload or DDoS attacks, or even planned maintenance activities which take components offline. Below is a sample of availability detection mechanisms CloudFront has put in place to detect different kind of failures:

The resiliency of CloudFront due to its design is demonstrated in the following availability report from Radar Community measurements by Cedexis (Now Citrix ITM) spanning over 30 days in Europe. Cedexis collects CDN performance data from real user’s browser using a JavaScript script running on some popular websites.

For more details about how CloudFront optimizes routing for availability and performance, you can watch the following talk from reInvent 2017.

For many content publishers, using a single CDN satisfies their video delivery requirements. However, some customers use multiple CDNs for a variety of reasons such as redundancy, performance, capacity needs, and commercial considerations.

For example, when you have high capacity requirements on the order of petabytes per month, perhaps concentrated in a specific region, you might need to source capacity from multiple CDNs in certain networks or geographies to meet your overall need. Another example is when your audience is spread across many geographies, you might need to use CDNs which are the only ones present locally in some geographies. In these situations, load-balancing between CDNs is fairly simple and static.

When I talk about multi-CDN, I specifically mean load-balancing traffic dynamically across CDNs based on their instantaneous performance to maximize delivery quality. If streaming quality is critical to your business, then serving your content from a CDN’s second best PoP in the event of PoP failure or saturation might not be satisfying for you.

Unfortunately, these kind of events happen frequently and CDNs are constantly competing over performance. As an illustration of this, the following median latency report from Radar Community shows the performance of two CDNs spanning a recent two day period in France. You can see how the latency of one CDN increased by 10ms during peak hours each day. 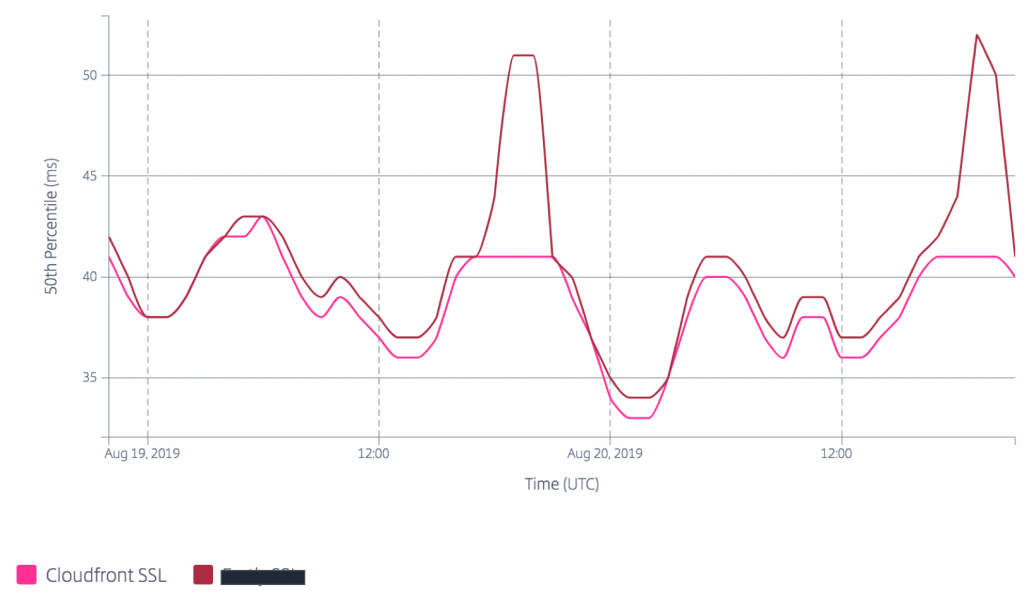 When you have the same level of requirements in terms of video delivery quality, then you might want to consider a multi-CDN strategy. However, before taking this approach, you need to balance its benefits with its drawbacks:

Measuring the performance of CDNs

Regardless of your CDN strategy, you should measure a CDN in a relevant way. This is an important step, because relying on inaccurate data leads to suboptimal decisions whether it is for benchmarking CDNs during procurement or for dynamic routing across multiple CDNs. Today, there are two common approaches for this.

The first one is consuming third party real user measurements (RUM) data like Radar community measurements provided by Cedexis. This approach has the benefit of being simple to implement, and it is quite reliable for monitoring the performance trend of a single CDN. However, it has some undesirable biases when used to compare CDNs:

You can mitigate some of these these biases by using Cedexis’ private measurements instead. In private measurements, you measure quality of service (QoS) metrics like throughput, latency, and availability of your own CDN setup. If you go this path, I recommend that you use a larger object size like 500Kb on the same CDN hostname of your video delivery, and to highly index on throughput and availability metrics in your CDN scoring and switching algorithm.

This is why I recommend the second approach, which is about measuring the video performance as experienced by your own users when consuming your own content. You can achieve it by implementing in your player an agent that measures the metrics you mostly care about. You can do it yourself using AWS services like Amazon Kinesis Data Firehose to ingest player events and Amazon Athena to query data. See this lab from re:Invent 2018 to learn how to build an AWS analytics solution to monitor the video streaming experience. If you don’t have the resources to do it yourself, you can use commercial solutions like Nice People at Work, Conviva, or Mux where you measure the quality of experience (QoE) as perceived by your audience, such as buffer ratio, bitrate, startup times, and so on.

However, in certain situations, you might not have enough data points to measure performance reliably using this approach, for example when you are operating in countries with a low number of users. In such situations, you can compensate with community RUM measurements.

In general, CDNs like CloudFront have mechanisms to serve users from the best PoP locations with the aim of optimizing availability and performance within the possibilities of their infrastructure. Some companies who operate video business at the scale of petabytes per month go beyond using a single CDN and invest in a multi-CDN strategy to optimize further video delivery. In part 2, I will discuss how to implement a multi-CDN strategy.