In this blog post, AWS intern engineers Aman Brar and Jason Liu talk about their experience working with the OpenTelemetry Collector and Prometheus Remote Write Exporter. They share their experiences in tackling challenges they faced and how they applied lessons learned to ensure the reliability of the AWS Distro for the OpenTelemetry Collector as the de facto agent for sending metrics to AWS Managed Service for Prometheus.

As software becomes exponentially more complex, understanding the state of our applications and infrastructure becomes increasingly important. Observability allows us to do just that. While monitoring enables us to understand the overall health of our systems, observability empowers us with detailed insights into the behavior of our systems through distributed traces, metrics, and logs. The recent surge and interest in monitoring and observability has led to the development and advent of numerous technologies and standards within the industry.

Since its launch, the Prometheus exposition format has been widely used and adopted, becoming the de facto standard for monitoring Kubernetes. AWS recently announced its Managed Service for Prometheus (AMP) to provide customers with a ready made, scalable, and secure solution to help them leverage the power of Prometheus.

Prometheus does so much on its own, but it often binds developers into its framework. With the rise of many different APM vendors, developers want flexibility in choosing vendor backends to visualize their metrics, such as Grafana, Amazon CloudWatch, and others. This flexibility also drives a need for unity within the realm of observability. The OpenTelemetry project aims to provide that support by defining a new open standard—the OpenTelemetry Protocol (OTLP) for collecting traces, metrics, and logs.

We are excited to release key features in the secure, production-ready, AWS-supported distribution of OpenTelemetry (ADOT)—and an end-to-end solution for Prometheus pipelines now exists in ADOT. ADOT follows the key tenets of reliability, security, and scalability. This means AWS teams ensure the AWS Distro for the OpenTelemetry components, including the Collector, various language SDKs, and Prometheus exporters, are production-ready for sending metrics to AMP.

To ensure the ADOT Collector was production-ready as the de facto agent for sending metrics to AMP, we needed to ensure that the ADOT Collector has full compatibility with Prometheus, while meeting the AWS design tenets of operational excellence, security, scalability, and reliability.

In our testing, we discovered that the ADOT Collector-AMP pipeline was able to successfully perform service discovery within our Kubernetes and Amazon Elastic Kubernetes Service (Amazon EKS) clusters. We tested each of the five Kubernetes objects that Prometheus can be configured to scrape: Services, Pods, Nodes, Endpoints, and Ingresses. Given the proper RBAC permissions, ADOT Collector performed service discovery successfully.

Next, we needed to test metric scraping and relabeling. Using a sample Prometheus metric generation app, we verified that ADOT handled counters, gauges, and histograms as expected; however, summary metrics were being completely dropped along the pipeline. Diving deeper, we found that OpenTelemetry removed support for the summary metric within their specifications as certain elements of the OTLP protocol were still under discussion. As those issues were since resolved, we filed new issues and attended Collector and Metric SIG meetings to discuss our use case and the importance of the summary metric. After several rounds of discussion, we added the summary metric support into the Prometheus Receiver, Prometheus Remote Write Exporter, and Logging Exporter. With those changes merged upstream, we were able to fully verify that all four metrics were being scraped and converted correctly.

ADOT as an AWS Distribution

AWS customers should not have to worry about the security of their data when working with AWS services. To ensure security, AMP requires incoming requests to both be encrypted by HTTPS and signed by AWS Signature v4. Only allowing HTTPS requests ensures that data is hidden in requests and the AWS Signature v4 signature ensures that AWS credentials that have permissions to communicate with AWS-managed Prometheus are signing them. The AWS Prometheus Remote Write Exporter ensures that both of these conditions are met by any outgoing requests in order to ensure a secure export to AMP.

Moreover, it is important that AWS customers never miss out on any metrics, and hence we have included functionality to allow for Cortex HA Deduplication. This means customers can run multiple redundant replicas of their AOC instance, so that if any one of them fails, one of the others is there to pick up where it left off and ensure that no metrics are missed. This is easily configured by the use of High Availability (HA) labels. Customers simply need to set environment variables in their AOC deployment pod that represent a cluster and replica. For each cluster, only one replica’s data is kept, so we recommend the replica being the pod name. Customers then need to specify the cluster and __replica__ labels using external labels in the AWS Prometheus Remote Write Exporter. With this configuration, AWS-managed Prometheus will apply Cortex HA de-duplication logic and ensure no duplicate metrics are kept while multiple redundant replicas are running.

As the OpenTelemetry Collector continues to evolve, we found issues that needed to be resolved before the Collector could be officially released. One issue that arose while testing the Prometheus Receiver was a race condition creating deadlock. Through thorough investigation and help from our AWS mentors, we discovered the source of the problem and ensured the reliability of the solution.

With all of our changes merged upstream, the Prometheus Receiver has been fully vetted, ensuring that the first component in the ADOT Collector-AMP pipeline is working as expected.

The Prometheus Remote Write Exporter is a component within the collector that converts OTLP format metrics into a time series format Prometheus can understand, before sending an HTTP POST request with the converted metrics to a Prometheus push gateway endpoint.

The only significant bug that was discovered in the functionality of this component was one that was straightforward to resolve. This bug was about histograms not being converted as expected. Prometheus expects histograms to be cumulative, which means that a bucket should contain the count of all observations with values less than or equal to that bucket’s upper bound. The OTLP histograms being consumed by this exporter were not cumulative histograms, so we simply needed to make that conversion by summing up each bucket’s preceding buckets.

Another issue that was prevalent was this component’s interoperability with AMP. To send an HTTP request to an AWS service, it must have the correct authentication, which can be done by AWS Signature Version 4 (sigv4). Because the OpenTelemetry Collector is written in Go, and Go is a language that simply compiles static binaries, there is no way to have a dynamic run-time configuration to do this authorization. This means that this logic must exist alongside the exporters it is being used with, and because this is an open source project, it raised an important question: Where exactly should this code be located? Because this is a vendor-specific functionality, it didn’t make sense to be made a part of the core open source OpenTelemetry Collector. However, because AMP is going to be an important service for the OpenTelemetry Collector to work with going forward, it should be a part of the open source distribution’s responsibility.

To ensure operational excellence, we required comprehensive end-to-end testing of each component added to the AWS Distro for OpenTelemetry Collector. All the tests are available on GitHub. 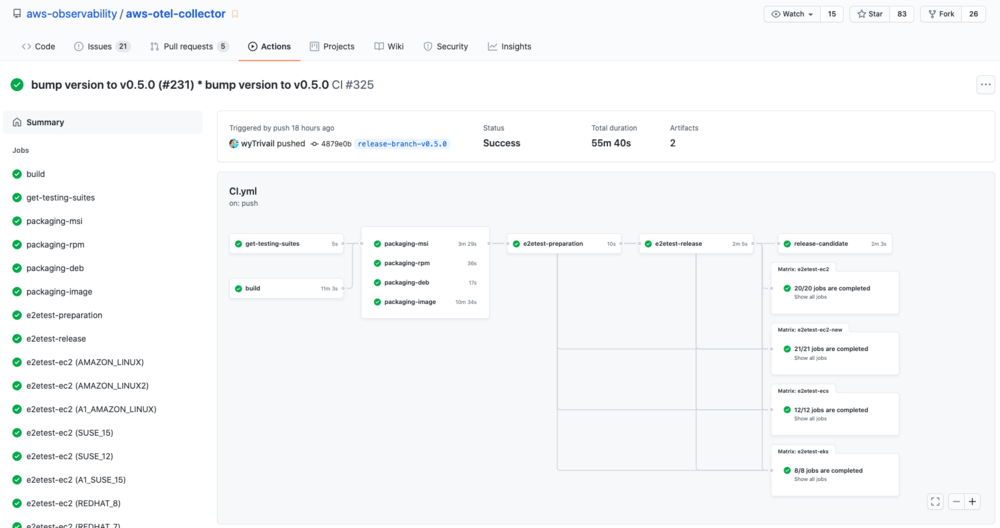 In addition to the validation tests, we perform soaking tests and performance tests in Amazon Elastic Compute Cloud (Amazon EC2) to ensure that ADOT performs efficiently and can handle immense scraping loads.

In soaking tests, we generate tens of thousands of metrics per scrape where ADOT scrapes at an interval of 15 seconds. The sample app and ADOT are deployed on separate Amazon EC2 instances within the same VPC. Amazon CloudWatch alarms are created on ADOT’s EC2 instance to measure the CPU and memory usage, as well as the amount of incoming bytes. 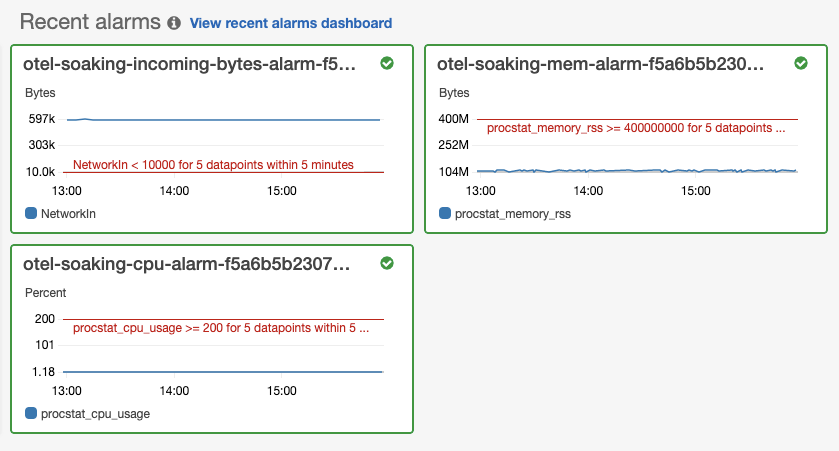 Performance tests run under a similar architecture. In this case, we generate different loads (100, 1k, and 5k metrics per second) for ADOT to scrape, process, and export. For performance tests, we monitor how the average and maximum CPU and memory usages change depending on the metric load.

These tests will continue to run on a routine basis to ensure the reliability of the AWS Distro for OpenTelemetry Collector.

During the course of this project, we have learned so much about the open source community and observability. As our project relied heavily on our knowledge of Prometheus and the OpenTelemetry Collector, we took a deep dive into both projects, learning the customer use cases, design choices, and nuances involved. By analyzing and helping to develop open source-approved code, we learned a lot of Go and open source best practices. Aside from programming, we also learned a lot about writing technical documentation and evaluations to ensure that our ideas were thoroughly planned and concrete.

We loved the feedback that we’ve gotten both from the OpenTelemetry community and internally from our mentors and managers at Amazon. It has been a tremendous time for both of us, and we hope to continue to contribute to OpenTelemetry and many other open source projects in the future. 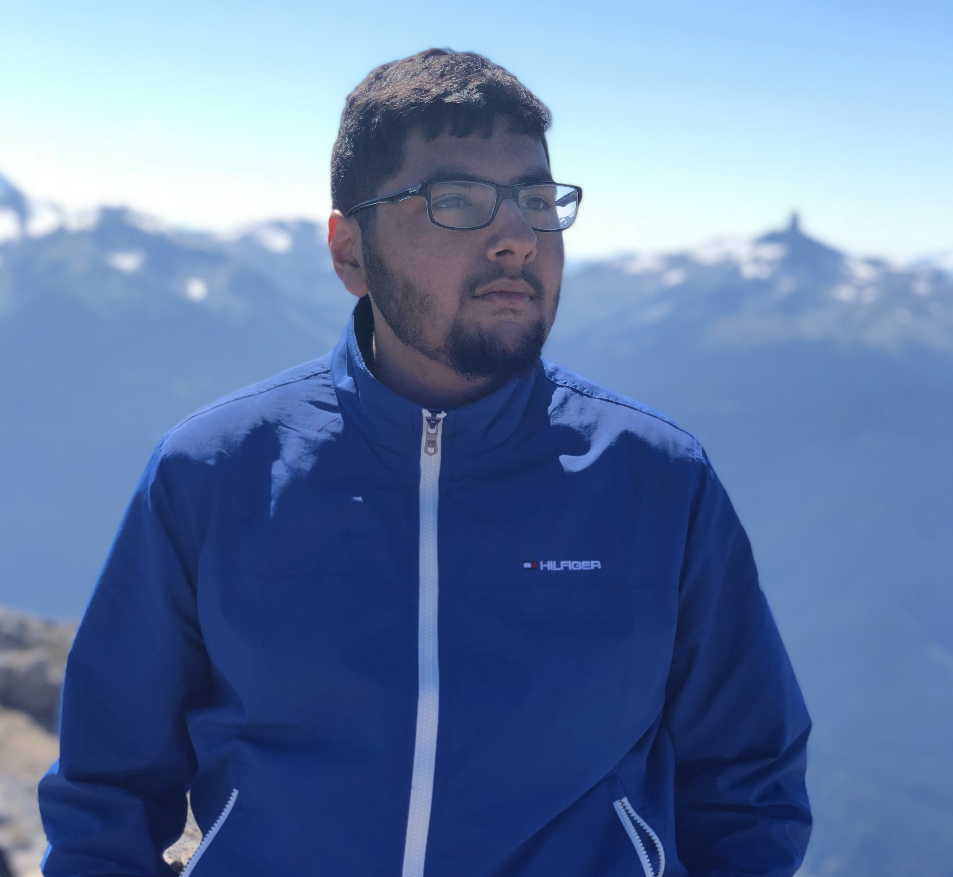 Aman is a fourth-year computer engineering student at the University of Waterloo. He is currently interning at AWS and is interested in observability and infrastructure. 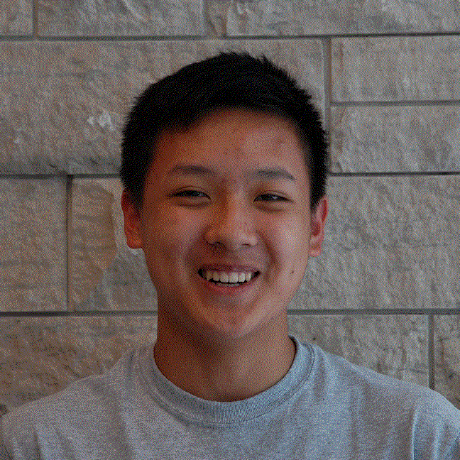 Jason is a third-year computer science student at the University of Waterloo. He is currently interning at AWS and is interested in system design and observability.