About open source at Amazon

At Amazon, we believe in and support open source software. We have contributed to hundreds of projects for over a decade, and continue to widen our collaboration, increase code contribution, and help sustain healthy open source communities. We have hundreds of orepos on GitHub where we have open sourced everything from SDKs, client side tools, open source JDK, Open Distro for Elasticsearch to core components of some of our services such as s2n and Firecracker.

In 2014, we launched AWS Lambda, our first serverless compute service, which lets you run code without worrying about servers. When you build applications on Lambda, you don’t have to manage servers, you pay only for what you use, your apps scale automatically with usage, and are highly-available and fault-tolerant by design. Your serverless application would typically use other AWS serverless services to provide API endpoints, databases, persistent stores, etc.

A lot of the heavy lifting is handled by AWS services for you. Using the Infrastructure-as-Code pattern, you write configuration files to provision services for the API endpoints, user auth, workflows etc. Once provisioned, AWS takes care of running the services for you. This means that you can focus primarily on the business logic, and just write a bit of plumbing here and there. This also means that all your code-first developer tools such as IDEs, test harnesses, build systems, deployment engines, etc. need to support authoring and managing the configuration.

A slew of developer tools have been created to help developers feel comfortable with the dramatic simplification that serverless offers. Guess what? The majority of them are open source! Let’s look at some:

Alongside the community, AWS has built and open sourced several tools for serverless developers:

Each of these projects has its own vibrant community of hundreds of developers working alongside AWS.

How did all this happen? Here are the highlights of how I created a community around SAM.

The community immediately began contributing everything from feature ideas and documentation improvements to bug reports. Within a couple of months, someone filed a GitHub Issue asking us to open source the implementation.

Fast-forward to 2018: we ended up open sourcing the SAM implementation. This was a proud moment for me personally, because it was the first time I had open sourced a business-critical component.

Before taking this decision, we had to answer a key question: SAM is a global service deployed to 15+ AWS regions and deeply integrated with other services. Is open sourcing even possible?

We wrote an internal document (one of Amazon’s famous “PRFAQs”) to answer these questions. The goal was to convince stakeholders that this was a good idea. But the document ended up mostly being about “how to run an open source project and build a successful community.” We knew that if we built a vibrant community we could combine the agility of open source development with the quality assurance practices of AWS, to produce high-quality software quickly.

To build a healthy community, we needed open communication among everyone, including engineers from AWS. We wanted to make everyone feel like part of the same team. So we created a Slack channel (#samdev) which now now has more than 1,000 members including contributors, customers, engineers, etc. 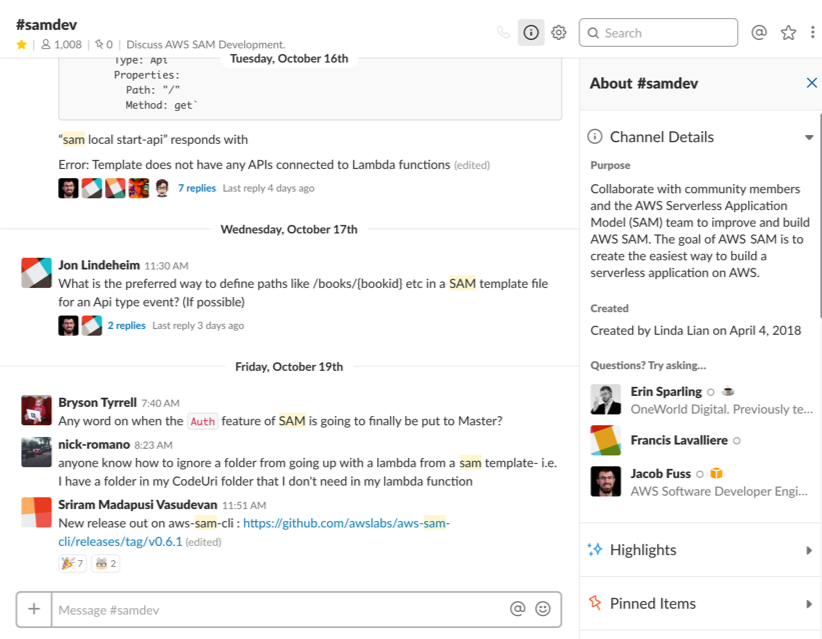 Within this one team, we wanted all software developers (again, including developers from AWS) to use the same tools, practices, and processes. We created detailed development guidelines, discussed designs publicly, reviewed and critiqued each others’ code changes publicly through pull requests, and communicated when releases happened. 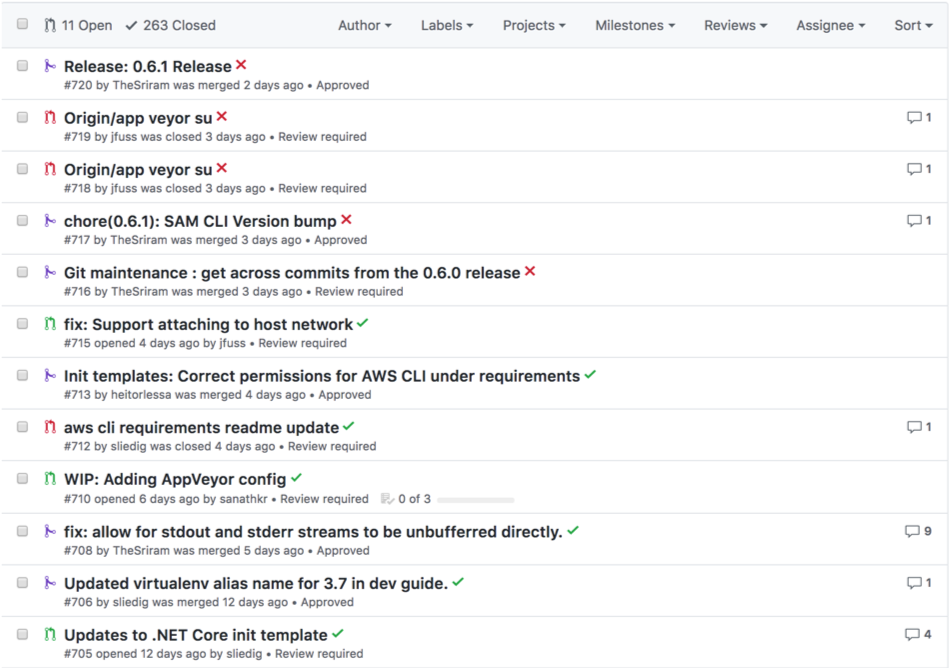 When every aspect of software development is open, it builds trust, increases code quality, and makes the community feel more welcoming.

Everything around engineering was open. But the product priorities and decisions were still happening behind closed doors. We therefore started the Request for Comments process (example RFC) where the community would provide feedback and could up-vote Issues. We used labels to set community priorities for issues and PRs to ensure that the community agrees on what to work on next. This also provided customers and contributors clear visibility into how we think about a problem/task. 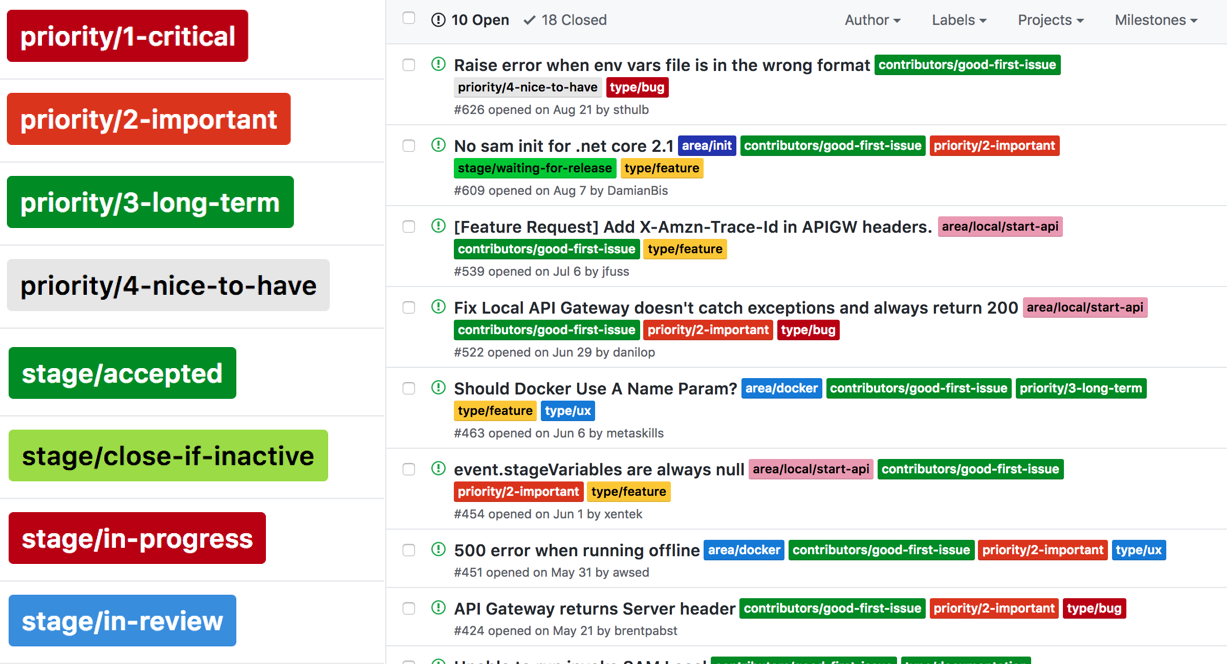 This is my favorite part about open source projects at AWS. While the community contributes code and thought leadership, we take care of deployments and releases on behalf of the community. At AWS, we have deep knowledge of deploying and managing web services at scale. Internally, we deploy SAM to all AWS regions. We ensure safe deployments by applying best practices such as auto-rollback, alarms, canaries, etc. We perform security reviews on every code change, ensure backwards compatibility, and deal with the deployment failures and outages.

When the deployment is done, we communicate back to the community using GitHub Releases so customers can start using it.

Every week, we have internal meetings to track the health of the community, software, and service. We review a set of metrics, discuss top issues, and identify ways to improve the health of both the community and the software. Here is a peek into some of the metrics we review:

Information from each week’s operational review is visible to the broader AWS Serverless organization. We often trade notes with other popular open source projects (like AWS CLI and the SDKs) to ensure that we don’t repeat each others’ mistakes, and that we continue to raise the quality bar.

I am incredibly proud of the community we have built around the AWS SAM product. 100+ developers have contributed valuable features and continue to support this product as we grow. Join the #samdev Slack channel and check out the SAM Contributing Guide to become a part of this growing community!

I will be giving a talk on building open source communities at OSCON 2019. Come say hi, if you are around.