An Illustrated Introduction to Quantum Networks and Quantum Repeaters

Quantum networks are an emerging technology that distribute entangled quantum bits to geographically separated users. These networks can enable new communication tasks such as the generation of shared cryptographic keys whose security does not depend on algorithmic complexity. This security can supplement and extend the current state-of-the-art in public key cryptography and future-proof it against advances in computing hardware. Additionally, quantum networks can provide private access to cloud based 3rd party quantum computers, where customers can run computations without exposing their code and data.

In this blogpost, we explain basic principles and use cases of quantum networks while explaining how a quantum repeater (a key piece of quantum network infrastructure) works. We start by introducing the basics of quantum bits and entanglement. Next, we show how distributed entanglement can generate cryptographic keys for customers. We discuss the current state-of-the-art in entanglement distribution and its shortcoming – limited network range. Finally, we discuss how the range limitation of current quantum networks can be overcome with quantum repeaters, devices that can store and perform joint measurements on quantum bits. 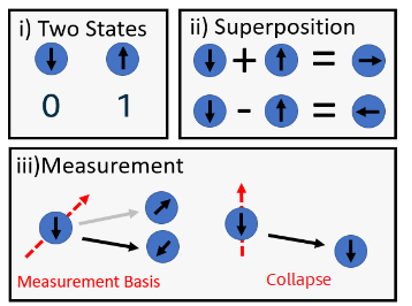 Figure 1: Properties of Quantum Bits. Quantum bits have two states, but unlike classical bits, they can exist in a superposition of both states at once. Measuring the state of a quantum bit causes it to collapse into one of two states.

Seen in Figure 1, quantum bits (qubits) have two states, which we denote as 1 and 0. Unlike classical bits, qubits can exist in a superposition state, where a qubit occupies both states simultaneously. These states, including superpositions, can be represented as the direction of an arrow: up or down, for 1 or 0 respectively, and left or right for two different superpositions of 1 and 0. The left or right direction encodes what’s known as the ‘phase’ of the superposition: whether there’s a minus or a plus sign in the mathematical expression for the state, as shown in the top right of Figure 1. 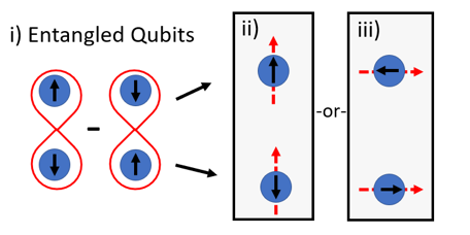 Figure 2: Quantum entanglement is a shared property of two or more qubits. In this figure, a two-qubit entangled state causes the outcomes of measurements on the two qubits to be correlated, regardless of the measurement basis.

The ability of quantum bits to be in a superposition of two states allows them to be correlated in a special and useful manner, called entanglement. Two qubits (top and bottom) can be entangled (denoted in Figure 2 with a red loop) in a joint superposition state (left component minus right component). Measuring an individual qubit of an entangled pair along any basis will produce a random outcome (e.g., up or down) with 50/50 probability. However, when both entangled qubits are measured in the same basis these two entangled qubits always point in opposite directions, seen in the two right two panels of Figure 2. This property holds regardless of the basis that they are measured in. 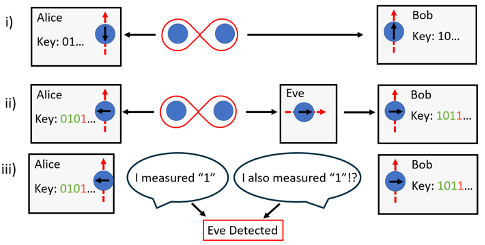 Figure 3: Secure Quantum Communication. Measuring one qubit of an entangled pair destroys the entanglement. Two communicating parties, Alice and Bob, can use this property to detect whether an eavesdropper is measuring their entangled bits.

Entangled qubits can be used to securely generate symmetric cryptographic keys, and detect attempted eavesdropping by checking that correlations occur as expected. If two parties (referred to as Alice and Bob in Figure 3) share entangled qubits they can both measure their local qubits and record the measurement outcome as a classical bit. Measurements performed on qubits of an entangled pair will be completely random but reliably correlated, allowing each party to validate that it holds the bit complement of its counterparty. Using multiple pairs of entangled qubits, the parties can build binary strings that are bit-wise complements of each other and use them as cryptographic keys.

The security of quantum communication comes from a principle called the no-cloning theorem, which states that it is impossible to faithfully clone an unknown quantum state. This can be understood as follows: if an eavesdropper attempts to intercept the quantum information by measuring one or both of the quantum bits, their measurement will collapse both bits to point in well-defined directions and destroy the entanglement, as shown in the middle panel of Figure 3. In this case, the measurements performed by the communicating parties will sometimes not be correlated in the manner expected. The attacker is also prevented from entangling a third quantum bit to store the information, by a principle called monogamy of entanglement, which states that only two qubits can be maximally entangled. This allows the two parties to check that correlations are not shared with a third party, by measuring the correlations of their pairs of qubits. The two communicating parties can publicly compare a random subset of their bits. If their bits are not correlated in the expected manner then the communicating parties know someone is attempting to eavesdrop on their communications, as illustrated in the bottom panel of Figure 3.

Figure 4: Entanglement Distribution. Existing systems for distributing entangled quantum bits to distant parties use lasers and nonlinear crystals to produce entangled pairs of photons. This approach is hampered by the loss of photons as they are transmitted over long fiber-optic links.

The promise of secure communication enabled by quantum entanglement has led to the development of systems for distributing entangled quantum bits to distant parties. Most entanglement distribution systems rely on photons to transmit their quantum information. Photons, or single particles of light, are effective qubits for quantum communication as they can be transmitted over long distances via fiber optic cables. Entangled photons are also easily produced by shining a laser through a special nonlinear optical crystal, illustrated in Figure 4. However, photons transmitted through telecommunications fiber are eventually absorbed or scattered. This sets a maximum distance for fiber-based quantum communication using just photons, typically around 100 km.

In classical fiber-optic networks this loss is compensated by introducing amplifiers, which boost weak signals by producing many copies of the input photons. However, due to the no cloning theorem, an amplifier cannot perfectly copy a quantum state. The noise it produces in the process of amplification destroys the entanglement necessary for quantum communications. Instead of an amplifier, we need to build a new device, a quantum repeater, which corrects for photon loss without disrupting the quantum nature of the communicated information by catching and storing (rather than measuring) the quantum bits encoded in photons.

A quantum repeater splits a segment of quantum network into two pieces, illustrated in the right half of Figure 5. It contains two quantum memories, B and C, that can catch photons and store their quantum bits without measuring them. In this manner the repeater can store one qubit each from two separate pairs of entangled bits. Once the repeater has caught and stored a photon from both sides of the link, it performs a quantum parity measurement on the stored qubits. Using the result of the parity measurement and the properties of the initial entangled qubits, we can know the parity of the remaining two qubits without having learned which direction they were pointed individually. This ‘swaps’ entanglement to the ends of the links without requiring a single photon to traverse the full distance between them. Notably, the repeater does not have to be trusted by Alice and Bob for the communication to be secure; if an adversarial party attempts to gain information about the key by measuring at the repeater station, Alice and Bob will see detectable changes in their measurements, similar to the bottom panel of Figure 3. 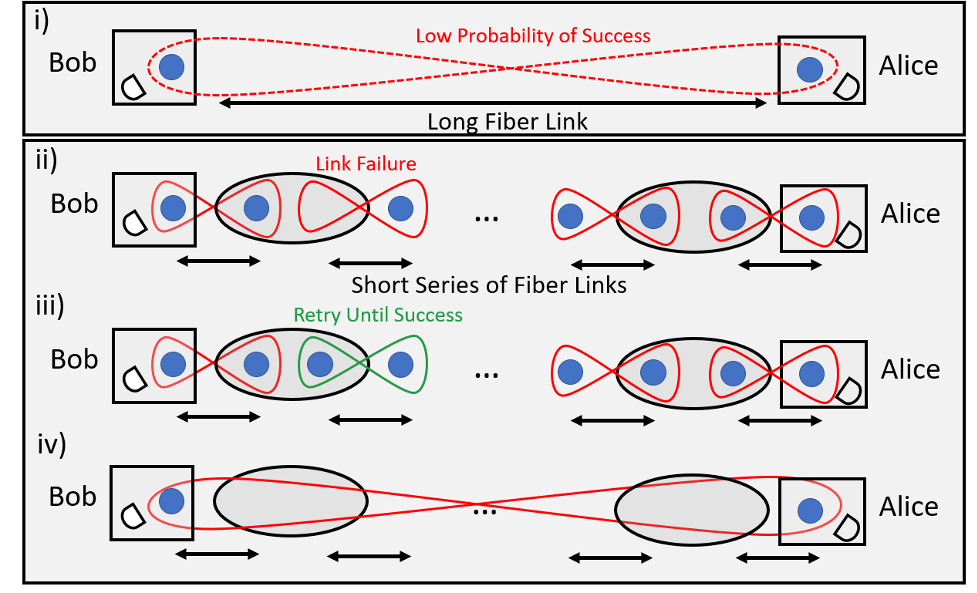 Quantum networks will enable customers across the globe to generate cryptographic keys and access quantum computers privately and securely. Quantum repeaters that can be operated at the scale necessary for a world-wide network are still in development, but the AWS Center for Quantum Networking is committed to pursuing the research necessary to put this unique technology in the hands of our customers. Our latest research, through our research alliance with Harvard University, focuses on reducing the need for cumbersome cryogenic equipment that was previously required to operate quantum repeaters built using solid-state qubits in diamond. If you’re interested in helping us develop quantum network technologies and explore their uses, consider joining us at AWS.