MORAI is an Autonomous Vehicle (AV) technology startup which provides a simulation platform for validation and verification of autonomous vehicles. MORAI’s autonomous vehicle simulator, MORAI SIM, is quickly gaining adoption in the AV/ADAS, automotive, robotics and aerospace sectors. Companies from multiple domains, such as autonomous vehicles, UAM, robotics, logistics, are using MORAI SIM to test a large and diverse number of scenarios to reduce cost, time to market and liability. In the public sector, government organizations and educational institutions, like Korea’s safety regulation bodies and universities, are using MORAI SIM to meet regulation and educate students.

In this post, we cover how AWS customer MORAI has been able to leverage the AWS RoboMaker which enables developers to run and scale AV testing without managing infrastructure. Because MORAI built a serverless architecture with RoboMaker and other AWS services, it is a cost effective and scalable so that MORAI built a reliable platform and tools for large-scale AV testings.

There are significant differences between having an AV demo and AV product because the latter requires reliable evidence that the system is sufficiently safe. But AV testing in the real world has numerous challenges. Developers can’t easily re-run the test as changes are made to the AV, so it becomes very time consuming and expensive to even try.

AV development is one of the most resource intensive technology endeavors ever undertaken by automotive companies. To reduce the level of effort to develop AV system, MORAI needed a solution that enables developers to speed up building, testing, and managing robot application.

On the other hand, it quickly became cumbersome for MORAI to manage instances and orchestrate a large number of scenarios with a diverse number of compute instances. They had unexpected resource usage because they provide AV training and testing environments to diverse customers. To scale resource capacity up or down according to the events, MORAI was looking for a scalable and cost-efficient way to run AV applications.

With the AWS RoboMaker Batch API, MORAI was able to abstract the orchestration and management of simulation jobs. RoboMaker allows developers to focus on developing testing platform for self-driving cars with scenario-based testing and highly automated generations of high definition maps. As a result developers in MORAI reduced the time of vehicle software deployment by up to 4 weeks.

With MORAI SIM Cloud, AV developers can test scheduling, routing and navigation optimization algorithms at scale in ways it has not been possible before. By recreating and parametrizing scenarios with an easy and natural script-able format and leverage an intuitive graphical interface which developers use to can create or edit various scenario conditions, such as weather, vehicle, or obstacles. As well as use various types of validated sensors, such as cameras, LiDARs, and Radars can be attached wherever the user wants.

MORAI SIM also provides an intuitive environment that enables the setting, calibration, and monitoring of embedded dynamics. MORAI’s data-driven simulation approach delivers value along each step of the autonomous vehicle development process, from the project inception stage to the testing and acceptance trial stage.

MORAI SIM’s architecture has been designed from the ground up to be a platform for accurate autonomous vehicles simulations, with large scale multi-sensor simulation capabilities. MORAI SIM Cloud’s multi-layer and multi-purpose architecture and libraries can be easily extended to facilitate software testing and validation across various automation software applications. Saving customers months and hundreds of thousands of dollars on new development by reducing their testing and validation risk.

MORAI team uses AWS serverless services to focus less on managing capacity and cost of servers. Because handling infrastructure management and predicting the resource usage were difficult considering their business, MORAI decided to build a resilient and efficient serverless architecture. 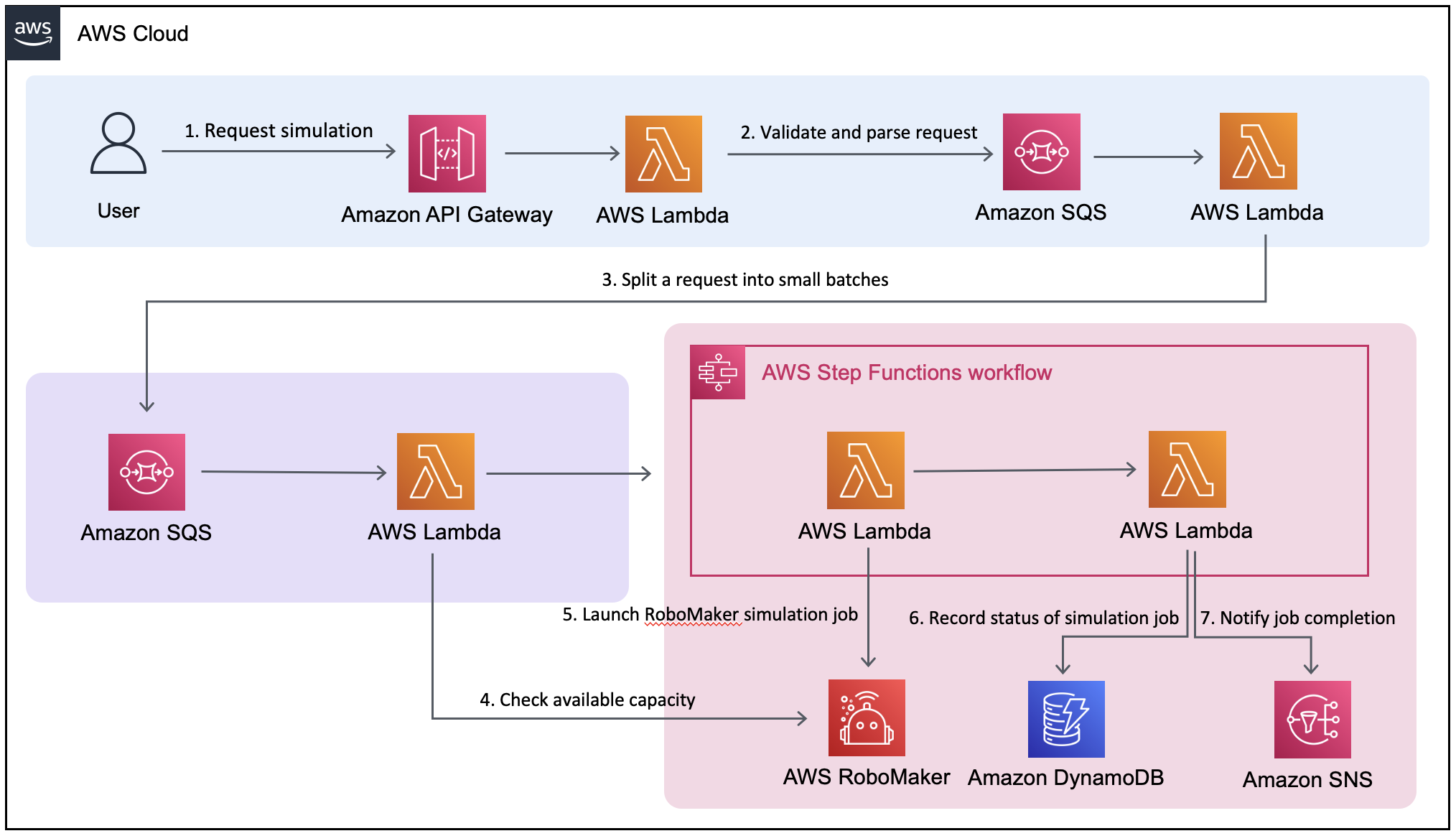 The steps for the solution shown in Figure 2 are as follows:

MORAI was looking for a scalable and cost-efficient way to run autonomous vehicle simulations and robot applications in the cloud. With AWS RoboMaker, MORAI was also able to reduce cost and time to develop AV application, running large-scale scenario-based simulations without managing infrastructure.