This blog references AWS RoboMaker Integrated Development Environment (IDE), a feature that has been deprecated. To follow along with this blog post, use the AWS Cloud9 IDE. See our updated blog on how to Build and simulate robotics applications in AWS Cloud9

Deploying and managing software for a fleet of autonomous robots is a complex, time-consuming, and error-prone task. Robot builders face challenges to prevent disruptions during software deployments. Challenges include establishing a secure communication layer to the robot, monitoring deployment status, and implementing failure-resilient logic. Additionally, robot builders routinely spend time and money integrating the technologies required to deploy their device software, increasing time to market and reducing margin. Once deployed, software requires significant development effort to collect reliable data, monitor the fleet, and build dashboards so operators can interact with robots, troubleshoot problems, and react to field conditions. Limitations to manage robot fleets result in operational disruptions caused by hardware or software malfunctions. These disruptions can lead to operational downtime and can cost robot operators millions of dollars per year.

In this blog, we introduce a new way to deploy and manage robot software on production fleets at scale using AWS IoT Greengrass 2.0. When combined with the industry-grade tools, libraries, and capabilities of the Robot Operating System 2 (ROS2), developers can bring new cloud-enhanced robot features to market, and reduce the time and effort required to build failure-resilient infrastructure.

In the following, we will show you how to implement a secure, reliable, and customizable, application management workflow with a detailed step-by-step tutorial using a cloud-connected ROS2 Foxy sample application.

AWS IoT Greengrass 2.0 manages code running on robots through modular, self-contained units called components. Components can represent applications, runtime installers, libraries, or any code – including ROS applications and/or containers. They are defined using YAML or JSON-based recipes, where developers can set configuration parameters, dependencies and lifecycle operations to install, run, startup, shutdown, and recover the component. AWS IoT Greengrass 2.0 also manages permissions for components to access AWS resources in the cloud. This enables applications running on the robot to connect to services such as Amazon S3 for cloud object storage or Amazon Kinesis for real-time data streaming and ingestion. Finally, AWS IoT Greengrass 2.0 provides a variety of pre-built public components. These components accelerate development of common functionality such as centralized log capture, and remote secure tunnel session management to robots without any additional development work.

To manage and deploy components to fleets of robots at-scale, AWS IoT Greengrass 2.0 uses device registry features provided by AWS IoT Device Management. Developers can apply searchable metadata such as robot type, hardware configuration, and software version to individual robots or groups of robots, then run deployment actions based on this configuration.

Robots registered in AWS IoT can have one or more JSON-based state objects called device shadows. Device shadows are synchronized between the robot and the cloud, enabling decoupled applications to interact with robot state even when disconnected. Device shadows can be indexed with AWS IoT Device Management. Robot operators and engineers are then able to filter, monitor, and alert on local conditions across fleets of thousands or even millions of robots. Results retrieved include battery conditions, mission status, location, or inertial measurement unit (IMU) data. The robot metadata and device shadow are available through AWS IoT API/SDKs and can be integrated with custom fleet management and operator-facing applications. You can use device shadows along with the library of public components to build rich cloud-enhanced robot applications. 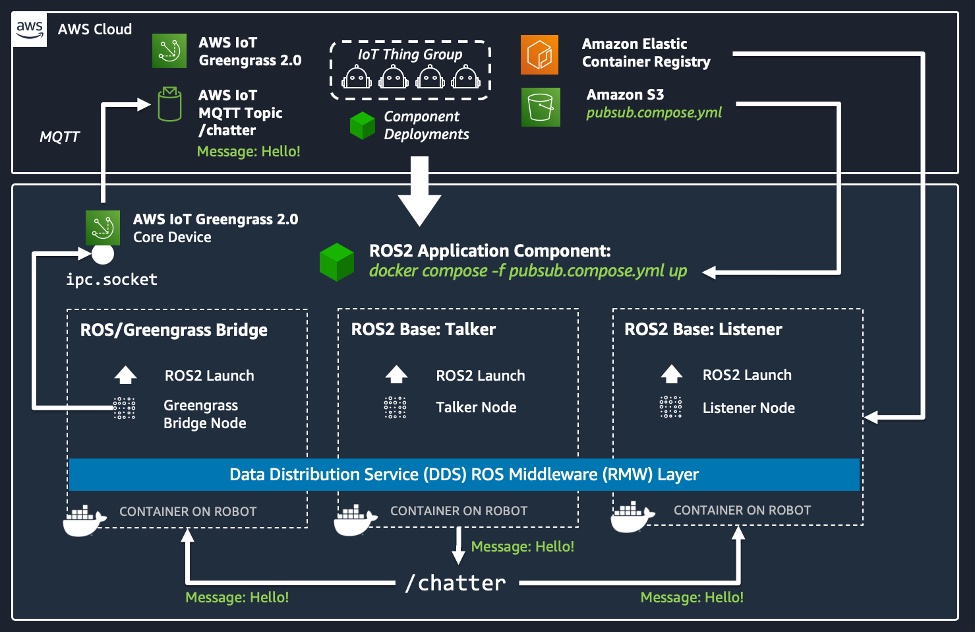 This tutorial contains the following steps:

Pre-requisites: This tutorial uses AWS RoboMaker Integrated Development Environment (IDE) for development. You can also develop locally on your own Linux-based machine. If you are developing on your local machine, make sure to install the AWS CLI and configure an AWS profile with administrative permissions, per these instructions.

Building and running ROS applications with Docker can provide multiple benefits in the design, development, and operation of code for robots. Using Docker containers, developers can run their ROS stack as a set of microservices and decouple application components from the configuration of the underlying host. This ensures consistency at runtime across various types of robots, software versions, and hardware stacks. For example, teams could run multiple distributions of ROS and seamlessly bridge between ROS 1 and ROS 2. Running ROS microservices in containers also enables developers to establish resource isolation boundaries between containers and the underlying host. This prevents an application failure or run-away process from impacting other containers and/or the host, enabling developers to build and orchestrate resilient application prioritization and recovery logic.

Docker also provides optimizations when updating software over-the-air. Docker images are read-only templates used to create containers and are stored as layers on the local file system. Common layers are shared between container images and only download and store files one time. Therefore, when new updates are deployed over-the-air, only the updated layers are deployed. When Docker image layers are optimized, developers can reduce the bandwidth consumption and duration of update operations. To learn more about Docker primitives and design patterns, click here. The ROS community also has dedicated tools for building ROS applications with Docker. To learn more about these tools, click here.

In this tutorial, we will use Docker to build, package, and run the ROS2 Foxy sample application.

Congratulations! The docker-based ROS application is now built, uploaded to Amazon ECR, and ready to deploy.

Next, we will install and provision AWS IoT Greengrass 2.0. Today, we are going to use the AWS RoboMaker IDE instance as a substitute for a real robot. You can also use this same process when provisioning real robots, and customize it to fit your desired configuration and security requirements.

In order to create the cloud-based resources required to connect robots with AWS IoT Greengrass 2.0, the provisioning process will need elevated AWS permissions. We have packaged the required permissions along with pre-requisite AWS resources for deployment in an AWS CloudFormation template. You can look at the template here: greengrass/greengrass_bootstramp.template.yaml.