In this blog post, we will show you how you can use AWS Systems Manager Change Manager to control access to Amazon Elastic Compute Cloud (Amazon EC2) instance interactive shell sessions, to enforce separation of duties. Separation of duties is a design principle where more than one person’s approval is required to conclude a critical task, and it is an important part of the AWS Well-Architected Framework. You will be using AWS Systems Manager Session Manager in this post to start a shell session in managed EC2 instances.

To get approval, the operator requests permissions by creating a change request for a shell session to an EC2 instance. An approver reviews and approves the change request. The approver and requestor cannot be the same Identity and Access Management (IAM) principal. Upon approval, an AWS Systems Manager Automation runbook is started. The Automation runbook adds a tag to the operator’s IAM principal that allows it to start a shell in the specified targets. By default, the operator needs to start the session within 10 minutes of approval (although the validity period is configurable). After the 10 minutes elapse, the Automation runbook removes the tag from the principal, which means that the permissions to start new sessions are revoked.

To implement the solution described in this post, you use attribute-based access control (ABAC) based policy. In order to start a Systems Manager session, the operator’s IAM principal must have the tag key SecurityAllowSessionInstance, and the tag value set to the target EC2 instance ID. All operator principals have attached the same managed policy, which allows the session to start only if the tag is present and the value is equal to the instance ID. Figure 1 shows an example in which the IAM principal tag SecurityAllowSessionInstance has the value i-1234567890abcdefg, which is the same as the instance ID.

In this post, we will take you through the following steps:

You can use this solution across your AWS Organizations to give you the benefit of centrally managing change-related tasks in one member account, which you specify to be the delegated administrator account. For more information about how to set this up, see Setting up Change Manager for an organization.

Note: The operator can have multiple sessions in different EC2 instances simultaneously, but the sessions must be approved and started one after another because of tag overwrite on approval.

The architecture of this solution is shown in Figure 2. 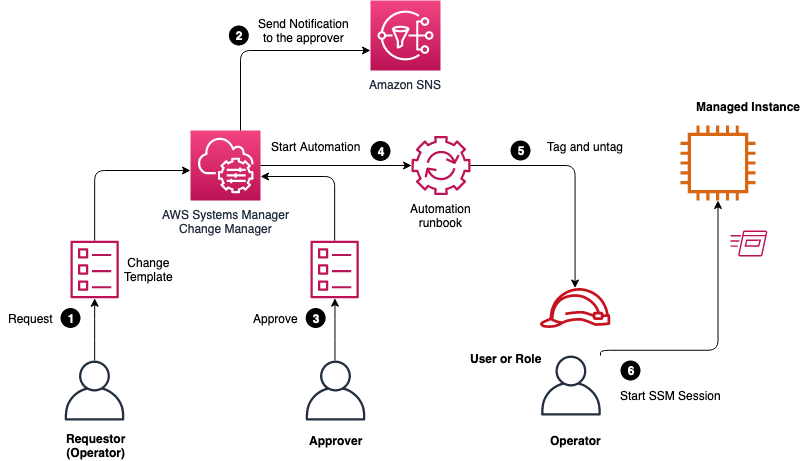 The main steps shown in Figure 2 are the following:

The provided managed policy AllowStartSsmSessionBasedOnIamTags gives permission to start the Systems Manager session when the instance ID is equal to principal tag, and additionally to terminate the session. The managed policy allows the operator to keep an already active session beyond the approval interval and terminate it as preferred. Resumption of the session is not supported, and the operator will need to start a new session instead.

WARNING: You should validate that the operator principal (which is an IAM user or role) does not have permissions on the actions ssm:StartSession, ssm:TerminateSession, ssm:ResumeSession outside the managed policy used in this solution.

Note: You should enable Systems Manager as described in Setting up AWS Systems Manager, according to your company needs. The minimal requirement is to set up the service-linked role AWSServiceRoleForAmazonSSM that will be used by Systems Manager.

To create the service-linked IAM role

Next, you set up Systems Manager Change Manager as described in Setting up Change Manager. Your specifics will vary depending on whether you use AWS Organizations or a single account.

Every change template should be approved before use (optional). The approval can be done by users and groups. If you use IAM roles in your organization, you will need a temporary user, which you can set up as described in Creating IAM users (console). Alternatively, you can use the change templates without explicit approval, as described later in this section.

To add reviewers for change templates

If you prefer not to explicitly review and approve the change template before use, you must turn off approval as follows.

To turn off approval of change templates before use

After you complete the setup, you will perform the following steps one time in your selected account and AWS Region. The solution manages the permissions in all Regions you select, because IAM roles and policies are global entities.

To launch the stack

(Optional) To approve the template

Now you’re ready to use the solution.

Next, we’ll demonstrate how you can test the solution end-to-end by doing the following: creating two IAM roles (Operator and Approver), launching an EC2 instance, requesting access by Operator to the instance, approving the request by Approver, and finally starting a Systems Manager session on the EC2 instance by Operator. You will run the test in the single account where you deployed the solution. We assume that you have set up Systems Manager as described in the Set up Systems Manager and Change Manager section.

Note: If you’re not using IAM roles in your organization, you can use IAM users instead, as described in Creating IAM users (console).

To prepare to test the solution

To do a positive test of the solution

Next, you can do a negative test, to demonstrate that access isn’t possible after the approval validity period (10 minutes) has elapsed.

To do a negative test of the solution

Clean up the resources

After the tests are finished, terminate the EC2 instance to avoid incurring future costs and remove the roles if these are no longer needed.

In the Systems Manager console, on the Change Manager page, on the Requests tab, you can find all service requests and their status, and a link to the log of the runbook, as shown in Figure 7.

In the example shown in Figure 7, you can see the status of the following steps in the Automation runbook: tagging the principal, waiting, and removing the principal tag. For more information about audit and login, see Auditing and logging Change Manager activity.

In this post, you‘ve learned how you can enforce separation of duties by using an approval workflow in AWS Systems Manager Change Manager. You can also extend this pattern to use it with AWS Organizations, as described in Setting up Change Manager for an organization. For more information, see Configuring Change Manager options and best practices.