Suppose you run a research lab and you dump a terabyte or so of data into Amazon DynamoDB for easy processing and analysis. Your colleagues at other labs and in the commercial sphere have become aware of your research and would like to reproduce your results and perform further analysis on their own.

Let’s take a closer look at how you might use this in practice.

How do I grant users API access across AWS accounts?

Let’s also assume that a developer is defined as IAM user “Joe” in aws@example.com. Joe needs read-only access to data stored in DynamoDB tables that are in research@example.com.

Enabling cross-account API access requires establishing a trust relationship between the two accounts. (In our example, that’s between aws@example.com and research@example.com.)

Account administrators can establish the trust relationship in two steps:

To establish the trust relationship, the administrator for research@example.com performs the following steps to grant IAM users in aws@example.com the ability to assume a role that grants read-only access to DynamoDB:

4. Expand Roles for Cross-Account Access and select the role type Provide access between AWS accounts you own.

How does Joe use the IAM role to access resources in the research@example.com?

The application that Joe uses to accesses data in the research@example.com account will make API calls to assume the IAM role and use the role’s temporary security credentials when interacting with the DynamoDB table in research@example.com. The following diagram illustrates the flow. 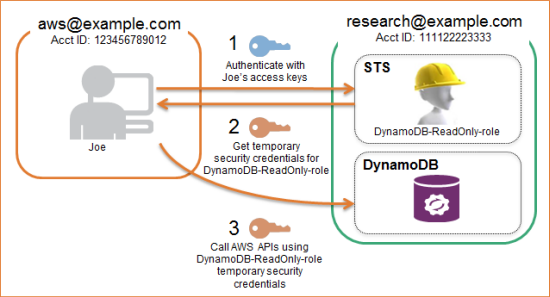 For additional information about this feature visit the Delegating API Access by Using Roles section in the Using IAM guide.

Enabling cross-account API access is another step in the evolution of IAM roles. In the future, we will evaluate integrating the ability to assume roles into the AWS Management Console as well as enabling additional AWS services to integrate with roles.

If you have specific feature requests or want to tell us about your use case please post to the IAM forum. As always, we are eager to hear about how customers use AWS IAM to control access to your AWS resources.