How to Implement Federated API and CLI Access Using SAML 2.0 and AD FS

Note from May 24, 2019: The features and services described in this post have changed since the post was published and the procedures described might be out of date and no longer accurate. Specifically, the procedures have not been tested with Python 3.x. If we update this post or create a replacement, we’ll add a notification about it here.

Note 1: On August 12, 2015, I published a follow-up to this post, which is called How to Implement a General Solution for Federated API/CLI Access Using SAML 2.0. Be sure to see that post if you want to implement a general federation solution (not specific to AD FS).

Note 2: This post focuses on NTLM authentication, the default authentication mechanism for AD FS 2.0. If you are using AD FS 3.0—which uses form-based authentication by default—see How to Implement a General Solution for Federated API/CLI Access Using SAML 2.0.

AWS supports identity federation using SAML (Security Assertion Markup Language) 2.0. Using SAML, you can configure your AWS accounts to integrate with your identity provider (IdP). Once configured, your federated users are authenticated and authorized by your organization’s IdP, and then can use single sign-on (SSO) to sign in to the AWS Management Console. This not only obviates the need for your users to remember yet another user name and password, but it also streamlines identity management for your administrators. This is great if your federated users want to access the AWS Management Console, but what if they want to use the AWS CLI or programmatically call AWS APIs?

In this blog post, I will show you how you can implement federated API and CLI access for your users. The examples provided use the AWS Python SDK and some additional client-side integration code. If you have federated users that require this type of access, implementing this solution should earn you more than one high five on your next trip to the water cooler.

Let’s start by taking a quick look at where we’ll end up.

What are we seeing in the preceding output exactly?

After taking this sample and customizing it for your organization, you’ll be able to leverage the power and automation of the AWS API and CLI interfaces by using your organization’s credentials, while maintaining the control provided by the AWS Identity and Access Management (IAM) service.

This post will focus on using Microsoft Active Directory Federation Services (AD FS), but if you are using a different provider, don’t despair because the basic pattern should work with other common IdPs.

Important note #1: An AWS access key pair is not configured in the above structure because the initial AWS STS call is authenticated by the SAML assertion returned by the trusted IdP. All subsequent API/CLI calls are authenticated by the key pair contained within the returned AWS STS token. For additional details, see Giving AWS Console Access to Federated Users Using SAML.

Important note #2: In the past, the various AWS SDK and CLI packages supported both config and credential files. These files have similar but slightly different syntaxes. Credential files are now standard and will be used in this post.  If you are still using a config file, you’ll need to convert to a credential file in order to avoid errors later in the process.

First, you need to install two of the modules that fall outside the core Python distribution, specifically beautifulsoup4 and requests-ntlm. There are several ways to do this, but the pip utility, which is included in Python 2.7.9+, makes it a very easy task. You simply need to run the following two commands:

You should get an output that looks similar to the following screenshot. 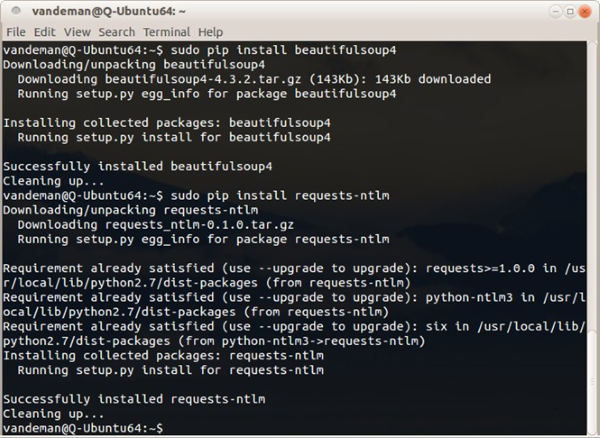 The AWS federation process utilizes what is known as an IdP-initiated login. In the last preparatory step, you’ll need to determine the specific URL that is being used to initiate this login. Start with your basic IdP-initiated login URL (the one you use for federated access to your various SAML Relying Parties, including the AWS Management Console). In this example, I’m using AD FS 2.0, where the URL takes the form of https://<fqdn>/adfs/ls/IdpInitiatedSignOn.aspx. If I place this URL in a browser’s address field, I’m presented with a site selection page, as shown in the following image.

In order to construct the URL you need, concatenate the original IdP-initiated login URL with the query string ?loginToRp=urn:amazon:webservices. The resulting URL should take the form of https://<fqdn>/adfs/ls/IdpInitiatedSignOn.aspx?loginToRp=urn:amazon:webservices. Save this URL because it will be referred to as the idpentryurl variable below. If you place this concatenated URL in a browser’s address field you should still reach the AD FS IdP-initiated login process. However, you bypass the site selection page and proceed straight to the AWS Management Console after you authenticate, which is the URL you need for this exercise. If you are interested, this query string is documented on Microsoft’s website.

Now that you have gone through the steps in the “Getting Started” section above, you are ready to start assembling the integration code that enables federated API and CLI access. I’ll explain what’s going on one chunk at a time so that you can follow along, and I have included a link to the full code example at the end of this post. First, let’s set up some basic imports and variables.

Adjust the variables in the previous code to suit your specific region (e.g., us-west-2, us-east-1, etc.) and format preferences (i.e., json, text, or table), and then plug in the value noted from the previous section in this post for the idpentryurl. If you’re using a self-signed certificate in a trusted testing environment, you’ll also need to set sslverification to False, in order to avoid certificate verification failures.

With the basic environment set up, prompt the user and retrieve the user’s credentials from standard input. I’ll talk later in this post about how we can support other credential forms.

The comma following the first print ”Username”, statement might look like a bug, but it is actually a little Python trick to prevent the print statement from appending a newline character. You’ll also note the use of the getpass() method, which prevents the password from being echoed out in the output.

Next, we use the Python requests module to assemble the authentication information and formulate the https request to the IdP as shown in the following snippet. Assuming the authentication is successful, the response returned by AD FS will contain the SAML assertion

At this point we have the IdP response safely in hand, so let’s overwrite and dereference the variables we used to store the user’s username and password because they are no longer needed. Python, as a higher-level language, doesn’t provide the direct memory manipulation to do this like one might in C, but this does a good job of ensuring the credentials don’t linger around.

As I noted previously, the SAML assertion that we need can be found in the response from the IdP. The following code uses the BeautifulSoup module to extract it.

This snippet simply iterates through all of the HTML input tags until it finds the one named SAMLResponse. The Base64-encoded assertion we’re after is contained in the value attribute of this tag. Before moving on, we need to go one layer deeper into the SAML authentication response itself and extract the list of the user’s authorized roles. This list is stored in the SAML attribute named https://aws.amazon.com/SAML/Attributes/Role, as shown in the following code.

In the first loop above, I’m using the Python xml.etree.ElementTree module to parse the SAML assertion. Though assertions aren’t particularly pretty to look at, the specific namespaces and names make finding what you’re looking for relatively straightforward.

In the second loop, the code is just doing a bit of proactive error proofing to make sure the Amazon Resource Names (ARNs) contained within the roles are in the right order.

Now we know the roles the user is authorized to assume. Next, the code asks the user which role they want to assume.

If the user only has one role, it is automatically used. Otherwise, the user will be prompted to select which role they want to use from a simple enumerated list.

Things now start to get quite a bit easier. Because we’ve already retrieved the SAML assertion and extracted the various ARNs, we just need to call the standard AWS STS service to request AWS temporary security credentials. This is really the crux of the entire utility. We’ve undertaken all of the effort up to this point to prepare the parameters for the following simple AssumeRolewithSAML API call.

Important note: The SAML assertion, which comes from a configured and trusted IdP, serves as the authentication credential for this API call.

Now that we have our credentials from AWS STS, the next step is to insert these credentials into a specific profile within the AWS credentials file as shown in the following code snippet. By doing so, you’ll be able to use the temporary security credentials for any number of API or CLI calls until the credentials expire.

In this code snippet, I’m simply using a combination of variables to locate the AWS credentials file, reading in the file, adding or updating a profile called ‘saml’, and writing the file back out.

Finally, the code gives the federated user a basic idea of what has just happened.

In practice, it would be far better form to place these additional API calls in a separate script that utilizes the credential profile we set up above, but the point of the exercise is that the credentials received from AWS STS are being used to authenticate the API call.

When you put all of this code together, you see what’s shown in the following output.

What are we seeing in the preceding output exactly?

You can then issue subsequent API or CLI calls by simply referencing the saml profile, as shown in the following output.

In the end, the browser oriented nature of SAML requires a bit of code and bit of engineering, but it accomplishes the goal: enabling federation-based authentication for API and CLI calls!

If you are using an IdP other than AD FS, don’t despair that your solution was not included in this blog post. The reason I chose the integration technique of using a Python module to emulate browser behavior is that it should be extensible to just about any IdP solution.