Update from January 17, 2018: The techniques demonstrated in this blog post relate to traditional SAML federation for AWS. These techniques are still valid and useful. However, AWS Single Sign-On (AWS SSO) provides analogous capabilities by way of a managed service. If you are just getting started with federating access to your AWS accounts, we recommend that you evaluate AWS SSO for this purpose.

In a previous blog post (Enabling Federation to AWS using Windows Active Directory, ADFS, and SAML 2.0), we described how you can enable single sign-on (SSO) to the AWS Management Console using Active Directory Federation Services (ADFS) 2.0 and Security Assertion Markup Language (SAML) 2.0. SAML-based federation eliminates the need to maintain separate user identities in both Active Directory (AD) and AWS, so that end users need to remember only a single username and password.

In this blog post, I use the same scenario that we did in the earlier post, but here I use Shibboleth as the identity provider instead of ADFS. Shibboleth is an open-source identity federation solution that’s used in research and education communities worldwide. If you’re already using Shibboleth, this post will show you how to configure it for single sign-on to AWS. If you’re new to Shibboleth, the post will help you set up a demonstration environment to try out single sign-on to AWS using Shibboleth.

As we did in the previous blog post, I’m using AD as the source for user identities. However, the configuration settings for Shibboleth and AWS would be the same even if you were to use a different identity provider, such as OpenLDAP. You can see the basic flow depicted in the following diagram. 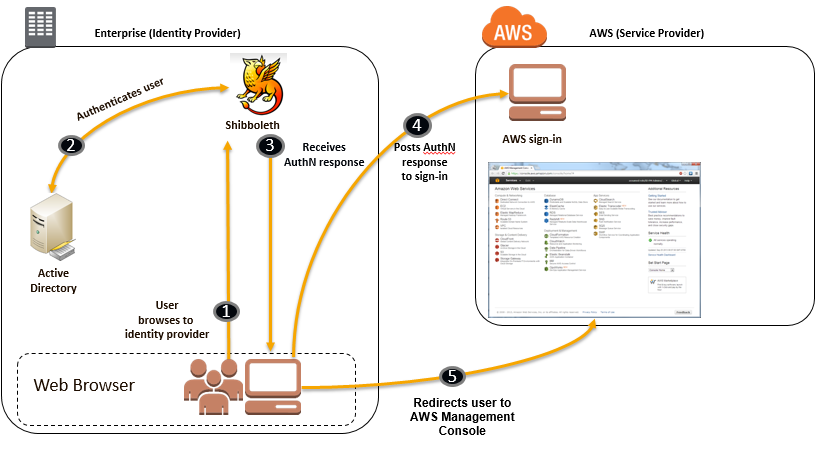 The following sections cover how you can set this up. I cover Shibboleth-specific sections in greater detail, since the previous post already covered the AD and AWS requirements.

1. Set up Active Directory as the identity store

If you want to quickly create a demonstration environment in Amazon EC2, you can take advantage of the AWS CloudFormation single-server AD template. This template will do the heavy lifting of deploying a Microsoft Window Server 2008 R2 instance and configuring it as an AD domain controller. This step takes about 15 to 20 minutes to complete.

To use the template, you must already have an EC2 key pair. If you don’t, see the EC2 documentation for instructions.

When you click the link to the template, it starts the CloudFormation wizard with the appropriate Amazon S3 URL already loaded; you can just click Next Step to proceed. If you’re not sure what values to use in the wizard, we suggest the following:

After the CloudFormation stack creation is complete, sign in to the EC2 instance as domain administrator and do the following:

Next, using the Active Directory Users and Computers, create an AD user named Bob Smith. In the User logon name box, enter Bob. After that, create two AD groups named AWS-Production and AWS-Dev and add Bob to these two groups.

Right-click the name Bob Smith, and then click Properties. In the General tab of the Properties window, enter bob@example.com in the E-mail text box.

Note   Be sure that you assign an email address to Bob and that you use AWS-Production and AWS-Dev as group names as described here. Later parts of this walkthrough assume these settings.

2. Set up Shibboleth as the identity provider

Shibboleth comes with a wizard-based setup that takes care of installing and configuring Shibboleth. You can set up Shibboleth on the EC2 instance that’s running your AD domain by following the IdPQuickInstall instructions on the Shibboleth website. To work through this blog post, download Shibboleth 2.x. The last release that includes a Windows .msi installer is Shibboleth 2.4.3.

In the wizard, you must complete two specific values:

You can leave the default values for other prompts in the wizard.

If all goes well, you’ll see a web page confirming the setup was successful. Skip the instructions listed under Next Steps on this page, because you need to make few configuration changes first.

In a production environment, the next step would be to acquire a public key certificate from a certifying authority (CA) and use it to secure the communication between Shibboleth and AD. For demonstration purposes and because both AD and Shibboleth are running on the same EC2 instance, you can disable the need for a certificate by modifying the Shibboleth configuration using these steps:

Shibboleth is now ready to act as the identity provider.

3. Set up Amazon Web Services as the service provider

Now you can configure AWS as the service provider. For this you need the metadata document of the identity provider. On the EC2 instance, open a browser and navigate to https://hostname/idp/profile/Metadata/SAML, replacing hostname with the full computer name of your EC2 instance (for example, win-p7ifu0exxxx.corp.example.com).

You will see a message about a problem with the website’s security certificate; this is expected, because you are not using a public key certificate from a CA when you access the identity provider. Click Continue to this website.

The browser displays the metadata document from Shibboleth. Save the document on your computer.

Next, go to the AWS Management Console and create a SAML provider named Shibboleth, using the instructions in the IAM User Guide. Be sure you use the name Shibboleth, because later parts of this walkthrough assume that name. As part of that process, you’ll upload the identity provider metadata document.

The next step is to create IAM roles that define permissions that federated users will have. You’ll create two roles—Shibboleth-Production and Shibboleth-Dev. Be sure to use these names, because later parts of this walkthrough assume these names. The idea is that you’ll establish a one-to-one mapping between the AD groups you created earlier and IAM roles in your AWS account; the mapping will be based on a naming convention. When everything is configured, a user in AWS-Production group will be able to perform only AWS actions permitted by a role named Shibboleth-Production, and users in AWS-Dev group will have the permissions defined in the Shibboleth-Dev role.

4. Configure Shibboleth to use AWS as a relying party

The identity provider does not know about the service provider yet, so the next step is to add AWS as a relying party in Shibboleth. In the EC2 instance, open the following file:

Inside the metadata:MetadataProvider element with id=”ShibbolethMetadata”, add the following snippet:

This entry tells Shibboleth that AWS is a relying party and its metadata is available at https://signin.aws.amazon.com/static/saml-metadata.xml.

The final step is to set some additional attributes that AWS will look for in the SAML assertion: awsRoles and awsRoleSessionName. Open the following file:

Add the following snippet just before the resolver:DataConnector element, replacing accountid with your AWS account ID. (There are two instances of accountid.)

The first attribute definition (id=”awsRoles”) configures Shibboleth to parse the memberOf attribute of the authenticated user to look for groups starting with “AWS-” (ad:SourceValue tag). Based on this, Shibboleth sets the awsRoles attribute in the assertion to include the corresponding role name that starts with “Shibboleth-” (ad:ReturnValue tag). For example, if authenticated user Bob is a member of AD group AWS-Production, the awsRoles attribute in the assertion will include a role with the following name: arn:aws:iam::accountid:role/Shibboleth-Production.

Now that Shibboleth is configured to generate the required AWS attributes, you need to ensure that these attributes get included in assertions. Open the following file:

In order for all the configuration changes to take effect, you need to restart Tomcat. At the command line in the EC2 instance, run the following two commands:

As before, you’ll see a message about a problem with the website’s security certificate. Click Continue to this website.

You will see the default Shibboleth login page as shown in the following screenshot. Enter the user name and password for Bob and then click Login. 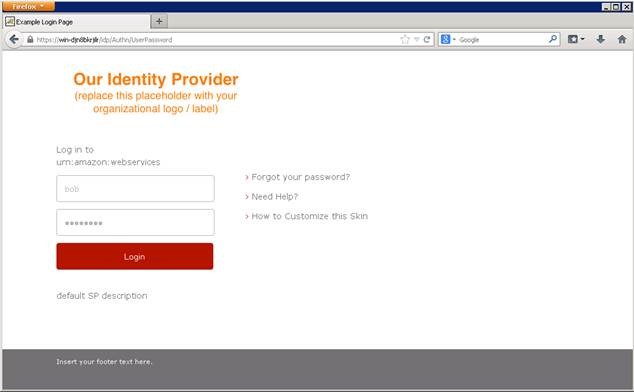 If everything is working, you’ll see a page similar to the following. Because you made Bob a member of both the AWS-Production and AWS-Dev AD groups, you will see two roles. Select one and then click Sign In. 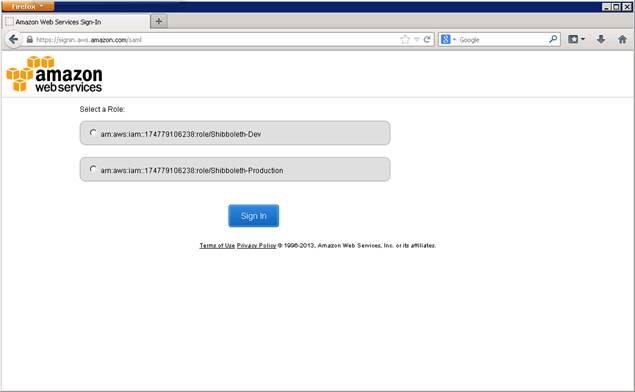 From here, you’re taken to the AWS Management Console directly, without having to enter any other credentials. This is single sign-on as a federated user! You (as Bob) will be able to perform only those AWS actions that are permitted by the role you selected in the previous step—for example, if you selected Shibboleth-Dev role, you will not be able to perform any write actions. 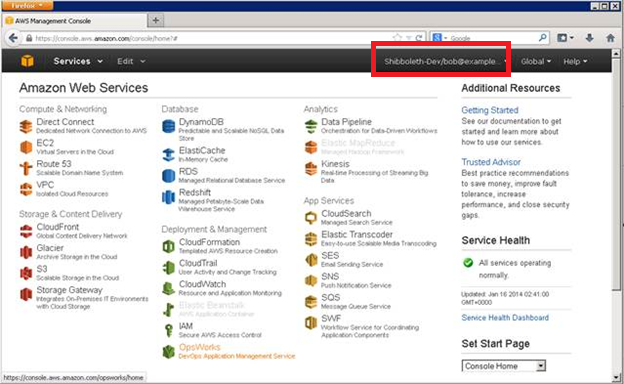 To summarize, you used AD as an identity store and Shibboleth as an identity provider to configure SAML-based federation to the AWS. This enabled your AD users to get single sign-on access to AWS Management Console.

If you have questions, comments, or suggestions, you can post them below or start a thread in the IAM forum.