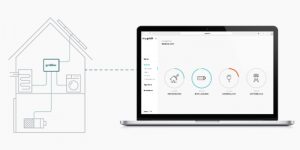 gridX co-founders Andy Booke and David Balensiefen came up with the idea for their IoT startup, gridX, while travelling in Ecuador, where the stability of the power grid left something to be desired. “The energy would just black out,” Booke recalls, “and then we saw this little village [that] had some solar panels and some diesel engines, and they were powering themselves in this little community.”

The experience sparked a question: Booke and Balensiefen knew that there were plenty of solar panels in Germany, where they are from, but weren’t sure what was happening to the solar energy being produced—was it being used and distributed efficiently? They returned home and started getting in touch with grid operators, and found there was a need for hardware that could optimize the energy flows between “prosumers,” individuals or businesses that produce energy as well as consume it, and the larger power grid. The pair founded gridX, a peer-to-peer energy company. gridX’s main product is its gridBox, which can be installed in a home or business and connects the solar panels to the national power grid.

Booke says gridX’s service is able to “optimize the energy flows in the grid” by getting data from “prosumers” about their energy consumption and use, and bringing all that data into the cloud. Once there, gridX analyzes the data to find cost reductions, efficiency improvements, or additional income. The idea is that these transactions have the cumulative effect of making the whole grid system more stable and efficient. Solar power production can be irregular—the gridBox lets users sell their solar when they have excess. If someone has a solar panel that’s producing more than they use, it goes into a pool of available energy, to be used by someone who needs more power than their panels are producing, or to users without solar panels, who gridX calls “pure consumers.” The ultimate vision for this system is that anyone with a solar panel and the capacity for energy storage can become an energy supplier, and cities can become “self-sufficient energy suppliers”—like the Ecuadoran village that sparked the idea for gridX in the first place. And gridBox users save on energy costs, or generate some additional money, along the way.

The company, founded in 2016, started out as a sketch on a napkin, when Booke and Balenseifen, straight out of college, would stay up until 3:00 in the morning writing business plans at the kitchen table. They’ve come a long way. Today, says Booke, gridX is processing more than 2.5 billion datapoints each day. And the company is continuing to grow. Booke says their data-analytics technology may have applications for utility service providers as well as the aviation and automotive industries, all of which are seeing the need to compile data from isolated systems. Booke says he’s excited about the growth: “It’s a really exciting journey where you can learn so much, and it’s the best thing I could do with my time.”