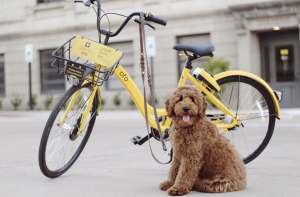 It’s a dilemma almost as old as the internal combustion engine: you’re too far to walk somewhere yet too close to drive. In transit circles, it’s called the “first-mile/last-mile problem,” and the team at ofo is looking to solve it.

Ofo is the world’s first “non-docking” bike sharing platform that also allows riders to offer the use of their own bicycles for access to the company’s fleet. Using ofo is simple: users get a password that unlocks a bike; when customers are done using the bike, they simply lock it up anywhere bike parking is permitted.

Originally created to make it easier for students to get to class in rural China, ofo has grown to service millions of users worldwide, from business people to tourists. “We are the only global player out there, with our little yellow bikes in 22 countries around the world,” says Chris Taylor, ofo’s Head of North America.

But it’s not just about the bikes. The team at ofo is trying to make the world a more multimodal place. “We have Vespa scooters. We have e-bikes,” says Taylor. “Our goal is to shrink those small distances that stand in a traveler’s way.”

The inspiration for ofo came out of the car share boom in the last decade, which has brought people together, and has changed what constitutes driving. But ofo goes one step farther. They ask whether you even need to take a car a short distance at all.

Taylor sees this playing out most dramatically in the transportation deserts that haunt many cities—locations too close to justify a car ride yet not well-serviced by public transit. And their vision is proving correct. In Dallas alone, 70% of ofo rides start or end at a public transit stop. People are using the platform to cover that “last mile” standing between them and their destinations.

Beyond bringing mobility options into transportation deserts, ofo also has its eye on the big picture. Almost half of CO2 emissions globally come from the United States, and the ofo team sees multimodal lifestyles as one piece to solving the environmental problems threatening the globe. “I’m much happier having more bikes on the road, and fewer cars,” Taylor says. “At the end of the day, it cuts down on pollution for the environment.”

Ofo’s social mission permeates the business. The company, for example, has partnered with the Clara Lionel Foundation, Rihanna’s non-profit that builds schools in Malawi and Barbados. Continuing its original mission to service young people in China, ofo is coming full circle, now donating bikes to youth in Africa.

And for ofo, 2018 has been off to a strong start. Six months ago, they rolled out in three US cities, and since then they’ve expanded to more than two dozen cities. “Our goal is to expand in the United States to over a hundred cities this year,” Taylor says. And in doing so, ofo is changing the world, one mile at a time.